Round 10: Bill Macey vs. Fletcher Peatross 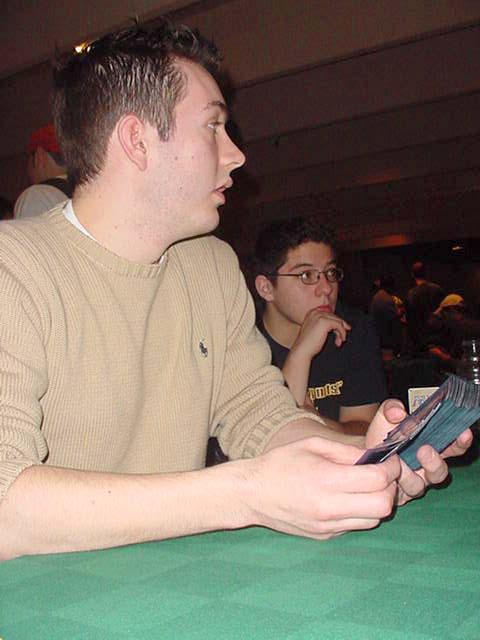 Old-schooler Bill Macey is back, with a vengeance. The longtime rogue player has been running the tables with a new Aggro-Oath deck designed by Dan Flood and Brian Kowal. He chose the deck on advisement that it would wreck Miracle-Gro. That's bad news for Fletcher Peatross, self-proclaimed Biggest Ass in Texas, who has chosen to run Bryan Hubble's version of Gro.

Game 1 wasn't pretty. Peatross kept a one-land hand with Daze and Manta Riders. He missed his second land drop, but managed to Daze an Oath. Pity he didn't have a way to stop the second Oath. He scooped rather than actually getting mauled.

Peatross had plenty of good tools in Game 2. Waterfront Bouncer, Curiosity, and Foil to protect it. Macey answered his Bouncer with Oath, and Fletcher was forced to Foil it. He had Gushed to do so, however, and so had to hold back on the Curiosity, saving his mana for Annul. 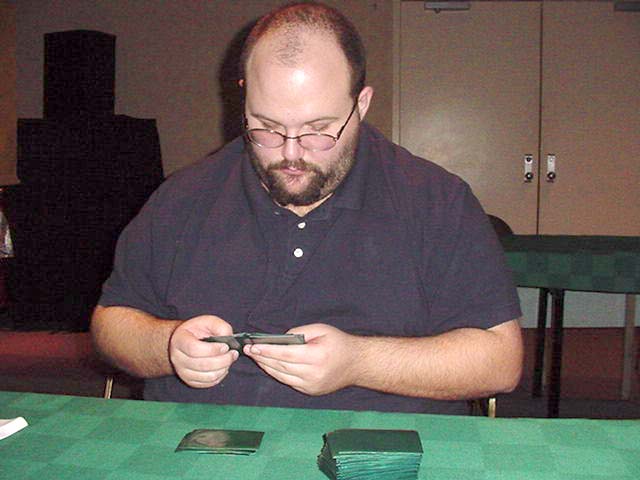 Macey Duressed, and Peatross hid with Brainstorm. Macey took a Gush, but couldn't stop the Curiosity on the following turn. Peatross again had Annul in hand. Macey Duressed again, and got a Deed into play. Peatross had to press with Gaea's Skyfolk to force the Deed, since Macey could have waited behind his Treetop Village.

Peatross bounced back with Lord of Atlantis and Manta Riders. Macey answered with Chimeric Idol. Peatross played Gaea's Skyfolk, but his resources were taxed. Carpet of Flowers let Macey draw out Force of Will with Wrath of God, and then play Mystic Enforcer. It was enough to win it. A topdecked Deed just made it quick.