Round 11: Brian Hegstad vs. Eric Taylor 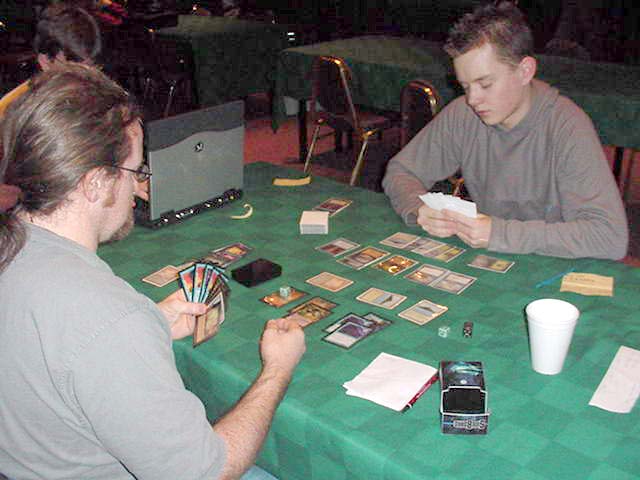 In this Round 11 feature match, two heartthrobs faced off against each other. Both of these men seem to attract the ladies no matter where they go. It was a match of the new versus the old, or, in this case, the prehistoric. Hegstad was playing a TurboLand deck that he has had a lot of success with recently, making Top 16 in PT: New Orleans with it and Top 32 in GP: Sendai. Eric Taylor was also playing the same deck that he played at New Orleans, a combo deck called Raisin Bran that is based around Aluren. Both players are out of contention for Top 8, but a win here will put them much closer to making Top 32.

Hegstad won the roll and elected to play first, starting off with an Exploration and 2nd land. Hegstad had no more land to play on Turn 2, but he was able to cast an Oath of Druids. Meanwhile Eric manipulated his library with Brainstorms and Land Grants, and stripped a Force of Will out of Hegstad's hand with a Duress. Hegstad did have a 3rd land to play on Turn 3, and along with it a Horn of Greed. Hegstad attempted a 2nd Horn of Greed on his next turn, which Eric let resolve, and fortunately he had drawn a land that turn to play. He laid out a Treetop Village and an Island, drew 4 cards, and passed the turn.

Eric, fearing that Hegstad would begin to gain too much card advantage the next turn, played an Aluren, the central card for his combo deck. He then used Raven Familiar and Man-O-Wars to look through his deck, but unfortunately he found no more Raven Familiars or Cavern Harpies, and thus he had to pass the turn to Hegstad. 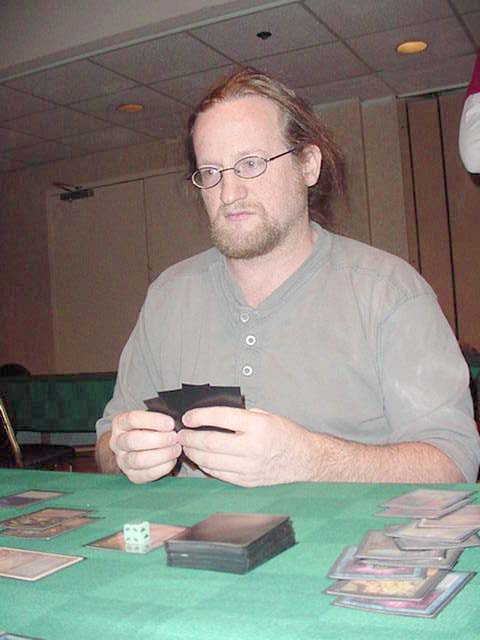 Hegstad was now able to use his Oath, and that let him get a Morphling, but, more importantly, he was now able to begin to "go off" by using multiple Horns of Greed and Explorations to draw through his deck. However, like Eric, he, too, fizzled, and was forced to pass the turn back to Eric. Between his draw for the turn and the 2 cards he drew from playing a land, Eric was able to find a Cavern Harpy, which would basically allow him to draw his entire deck between the Raven Familiar and Aluren, so Hegstad attempted to Counter it. Eric had a Force of Will for that, so Hegstad Thwarted by returning 3 lands to his hand, but Eric had yet another Force of Will and so the Cavern Harpy resolved, and the rest was clockwork: Eric gained a billion life with Cavern Harpy, Man-O-War, Spike Feeder, and Aluren, returned Hegstad's Morphling with Man-o-War, and attacked with a very large and angry Raven Familiar.

Hegstad brought in Annuls and Back to Basics from the sideboard, taking out useless cards like Oath of Druids and Spikes, while Eric brought in a few Emerald Charms for Man-o-Wars.

Hegstad chose to play first for the second game, and was forced to mulligan. "Triple Exploration Island isn't the best" commented Hegstad, to which Eric responded "Yea, I hate when that happens." Hegstad led with a Treetop, and on his second turn he played an Exploration and 2 lands. Meanwhile, Eric was fondling his library with Brainstorm/Bad River synergy. 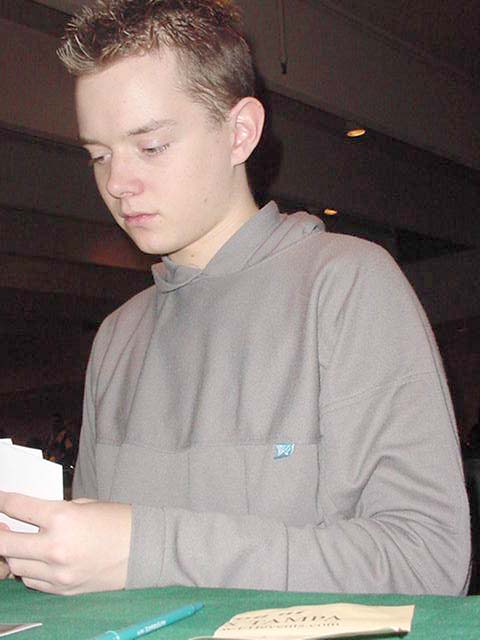 Hegstad, with newfound hope, cast a Scroll Rack, and on the following turn a Horn of Greed. Although he didn't have any lands that turn to abuse the Horn of Greed/Exploration combo, between an Impulse and the Scroll Rack he managed to find a Gush. Eric, sensing that he had little time until Hegstad would go off, cast a Vampiric Tutor on Hegstad's end step, and Duressed Hegstad twice, taking a Force of Will and Thwart, and then put a stop to Hegstad's combo with an Emerald Charm on the Exploration.

Over the next few turns, Hegstad continued to abuse his Scroll Rack, while all Eric could draw were lands; however, Eric was still able to manipulate his library almost as well as Hegstad could, casting multiple Raven Familiars and Impulses. Things were looking pretty bad for Eric, as Hegstad had a full hand of 7 and outlanded him nearly 2 to 1, so he decided to go for his combo. The first Aluren that he cast was Annulled by Hegstad, and Hegstad also felt comfortable enough to counter a Raven Familiar. Eric went for another Aluren, but Hegstad Annulled again.

Hegstad finally drew into an Exploration, and things became a matter of clockwork once again, except this time for Brian, not Eric. Brian killed Eric just before time ran out with a Morphling, and thus the match was a draw.

4 Horn of Greed 3 Back to Basics