Round 11: William Jensen vs. Alan Comer 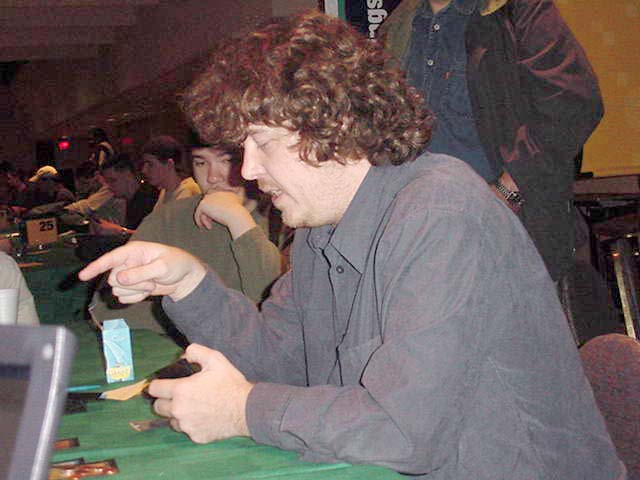 William Jensen and Alan Comer both entered this round in strong contention for the Top 8. Jensen, at 8-1-1, is playing an Oath of Druids deck that is an excellent metagame call in a field saturated with Miracle Grow decks. Comer, at 8-2, is unsurprisingly playing his Miracle Grow creation that has turned the Extended world upside down.

Comer Brainstormed, then Land Granted showing Bouncer, Brainstorm, Dryad, two Gushes, and Winter Orb. Seeing no resistance, Jensen slammed down Oath of Druids on his second turn. Comer followed that with a Winter Orb. On turns three and four Comer used Land Grants to thin his deck of lands. He summoned a Waterfront Bouncer and a Quirion Dryad on his fifth turn, but Jensen had the Swords to Plowshares to kill the Bouncer, and a Gush from Comer did not yield salvation for the Bouncer The active Oath of Druids brought forth a Morphling and triggered a Gaea's Blessing. In response to the resolution of the Blessing, Jensen cast Accumulated Knowledge for three.

Jensen cast Seal of Cleansing and looked to be in very good shape. Comer Gushed again during his next turn and Brainstormed to build the best hand possible to counter the Swords to Plowshares that he knew was going to arrive soon. Jensen did indeed attempt the Swords to Plowshares even though he only had only one mana available and a Counterspell and a Force of Will in his hand. This play demonstrates a fundamental understanding of the matchup because Jensen saved his countermagic for the only potential impediment to his eventual victory, Winter Orb.

In addition, Jensen could chump-block indefinitely using the creatures that Oath brings into play. Jensen chump-blocked with his Morphling and used his Oath to replenish his library. He then summoned the Ancient Hydra that had been sitting inconveniently in his hand. Comer played Curiosity on his Quirion Dryad and a Werebear during his next turn. Jensen blocked the Dryad with the Hydra and did three damage to Comer before the Hydra died. Oath of Druids summoned Morphling again and Jensen played out another Oath. Comer cast Gush, played a second Curiosity on his Dryad, and a Merfolk Looter. Jensen once again blocked with his Morphling.

During his upkeep, the Oath of Druids brought both Ancient Hydra and Morphling into play. He used a Hydra counter to kill the Looter. Comer tried to bring out Winter Orb but Jensen had both Counterspell and Force of Will to make sure that it never reached play. After this Comer picked his cards up to get ready for game 2.

Jensen brought in several Pyroblasts, a Disrupt, and a Seal of Cleansing, removing four Counterspells and one Force Of Will. Comer sided in three Emerald Charms to deal with Oath of Druids and an additional Winter Orb, removing two Foil, a Merfolk Looter, and a Waterfront Bouncer.

Jensen Wasted Comer's Tropical Island, trapping him at one land. Two turns later Comer found a second Land Grant (now showing Waterfront Bouncer and Curiosity in addition to Werebears and Gushes) and Jensen couldn't stop it from resolving. Comer then used his two lands to play Werebear. Jensen cast Oath of Druids on his turn but Comer exploded on his turn with Sleight of Hand, Gush, Emerald Charm on the Oath of Druids, Curiosity, and a Force of Will to counter Jensen's Swords to Plowshares. 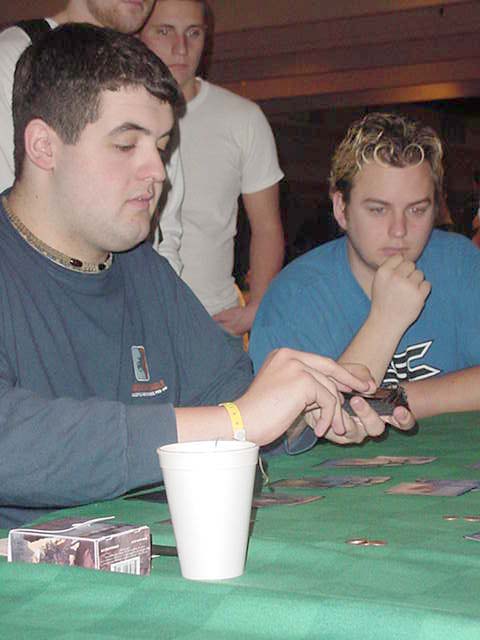 Jensen then Wastelanded the one Tropical Island that Comer had on the table and successfully Plowed the Curious Werebear. Jensen then cast Accumulated Knowledge for three and Gaea's Blessings that Accumulated Knowledge back into his library. Comer summoned another Werebear during his turn but Jensen had by now drawn another Oath of Druids. Comer destroyed the Oath with another Emerald Charm and Jensen surprisingly didn't have any countermagic. He did have another Swords to Plowshares, however, and used that to remove the Werebear from the game.

On his next turn he hard-cast his Ancient Hydra and when Comer played a Quirion Dryad the Hydra easily killed it. Jensen then Gaea's Blessinged two Plows back into his library and killed the Winter Orb that Comer cast on his turn. Comer had a Quirion Dryad as Jensen's Hydra faded away. Once the Hydra died, Jensen has a lonely Treetop Village and Comer had a 2/2 Dryad and a Werebear. He had no more green mana because Jensen had Wastelanded again during his previous turn. A Swords to Plowshares from Jensen was met with two Brainstorms and Gush which yielded a Force of Will for Comer.

Jensen had a Pyroblast to stop the Force of Will so the Dryad was removed from the game. Jensen then played Oath of Druids and was gradually gaining total control. Comer attacked Jensen down to eight on his following turn and summoned a Waterfront Bouncer. The Bouncer couldn't control the Morphling that the Oath of Druids brought into to play, and Jensen had a Swords to Plowshares for Comer's Werebear. Morphling and Treetop Village enforced Comer's demise as a last-ditch Gush by Comer was met by Pyroblast.