Round 13: Ken Krouner vs. Alex Shvartsman 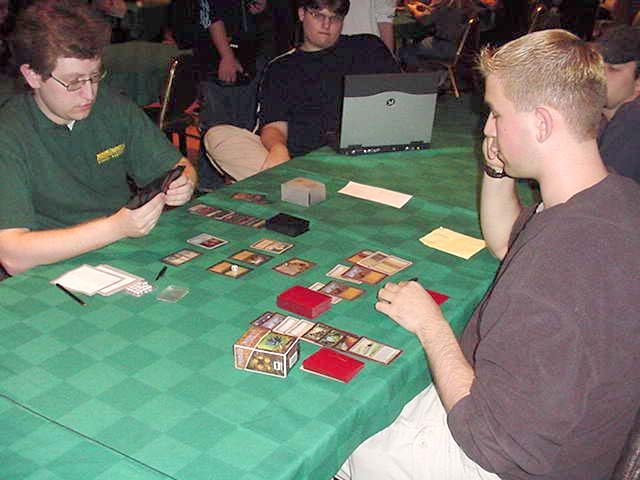 In the final round, two New York locals squared off to determine who would be in the Top 8 and who would be watching it from the sidelines. Alex Shvartsman is very familiar with this situation having made more Grand Prix Top 8's than any other player, while this is Ken Krouner's first time to ever be in the running.

Ken won the die roll and chose to play first, while Alex was forced to mulligan. Ken Wastelanded Alex's Tropical Island on Turn 2, and played a Gerrard's Verdict on Turn 3; however, Alex turned the tables on him, pitching a Curiosity to Misdirection to make Ken discard two lands. Ken attempted a River Boa on his next turn, but Alex had a Force of Will for it, which he followed up with a Gaea's Skyfolk on the next turn.

Although Ken had a Diabolic Edict for the Skyfolk, Alex had more gas in the form of a Werebear. Ken wasn't too worried about the Werebear, though, as he had a Spiritmonger, but tapping out to play it made him very susceptible to the Winter Orb that Alex dropped. The Spiritmonger traded hits with a Werebear and Quirion Dryad for a few turns, but Ken was very far ahead on life due to the Gerrard's Verdict. 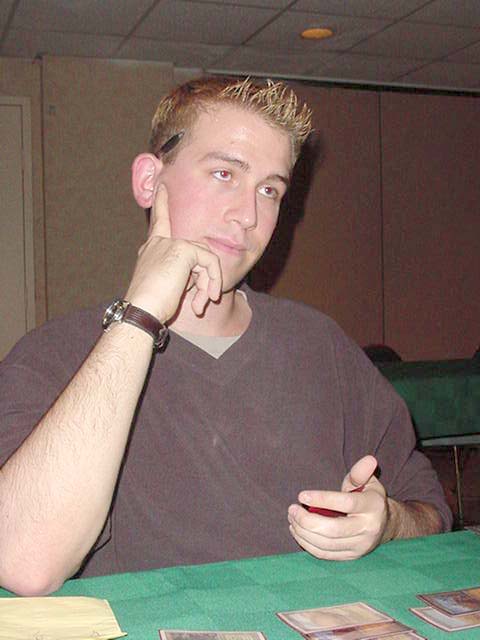 Alex's Quirion Dryad began to grow a lot after Alex cast a Gush and a Sleight of Hand, to which Ken responded "Alright, now this is just getting out of control." Alex also cast a Werebear, and then Dazed Ken's attempt at a second Spiritmonger, which forced Ken to leave his Spiritmonger back. Once the Spiritmonger starts to chump block, it's time to scoop your cards, and that's exactly what Ken did.

Ken, still aching from the Misdirection on Gerrard's Verdict, sided out 4 Verdicts, a Duress, and a Spiritmonger for a few Diabolic Edicts, Powder Kegs, Seals of Cleansing, and a 4th Deed, while Alex took out a few Gaea's Skyfolks, Foils, Curiosities, and a Winter Orb for Submerges and Legacy's Allures. "Well, at least 50% of this table sideboarded correctly" commented Ken, citing that he had been playing against Miracle Grow all day.

Ken chose to play first for the second game, and played a turn two Wild Mongrel, to which Alex responded with a Legacy's Allure. Ken played out a Seal of Cleansing, thus neutralizing the threat of the Allure, but had his Wild Mongrel Submerged. Alex played out a Werebear, while Ken recast his Wild Mongrel, Sealed the Allure, and attempted to Plow the Werebear; Alex decided that that was a bit too much for Ken to be doing all in one turn, so he Gushed in response and Force of Willed the Plow.

Ken cast a Call of the Herd, but was unable to attack with his Wild Mongrel due to the 4/4 Werebear. Alex played out a 2nd Legacy's Allure and a Winter Orb, while Force of Willing Ken's Pernicious Deed. Ken had a 2nd Deed, however, and this time Alex didn't have a way to stop it, and the Deed cleared the board on Alex's next end step. Free to untap his lands, Ken played out a few of the cards that the Winter Orb wouldn't allow him to, but that didn't last for long, as Alex had a second Winter Orb. 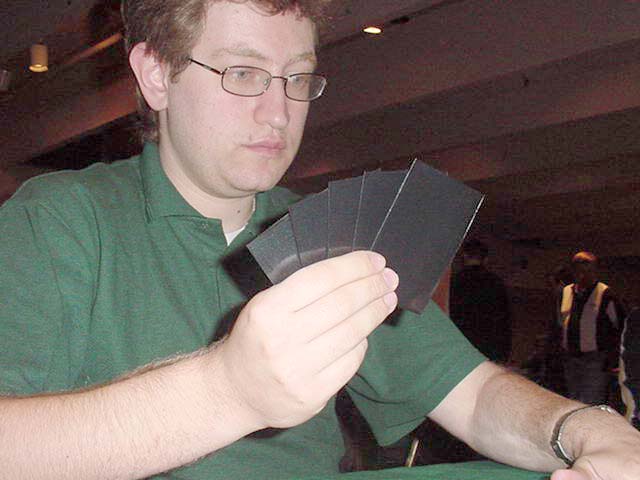 Ken beat down with an Elephant token for a few turns, but got a bit greedy and played a Call of the Herd from the graveyard, and Alex had the Daze. Although Ken was able to pay the 1, that was exactly what Alex wanted, as Ken had no mana left untapped, so Alex sent both tokens to the graveyard with a Withdraw. The game continued to go back and forth, with Alex playing out a Werebear, then Ken summoning a Mystic Enforcer, but the game turned in huge favor of Alex when he Misdirected a Diabolic Edict, saving his own Werebear and killing Ken's troublesome Mystic Enforcer. It was only a matter of turns after that until Ken succumbed to the Werebear.

Final Result: Alex defeats Ken 2-0 to advance to the Top 8.