Round 2: Brian Kowal vs. Ryan Ellis 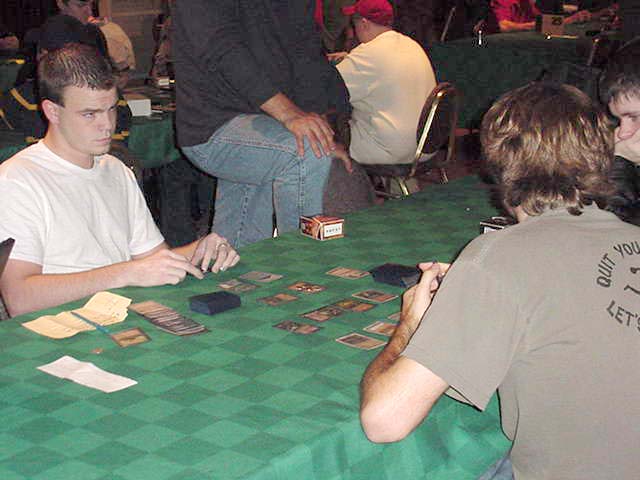 This second round matchup saw noted deckbuilder Brian Kowal step up against true bohemian Ryan Ellis. Ellis was running Miracle-Gro, a popular deck at this tournament. Kowal was playing something that seemed at first glance to be Junk, but with Oath of Druids to turn up his deck's only creature card: Mystic Enforcer.

Ellis won the coin flip, and kept, staring at a strong opener. He led with Island and Land Granted for a Tropical. His Quirion Dryad was all set to go large thanks to two Sleight of Hand and a Gush. Kowal meanwhile tapped out for Sylvan Library. Ellis found Curiosity waiting for him. Kowal's Library served up a Plow, and a Gush from Ellis gave no countermagic.

With things turning in his favor, Kowal dropped an Oath of Druids. It also went uncontested. Ellis powered up his Dryad and attacked, fearing the worst. The Oath flipped a bunch of cards before hitting Mystic Enforcer. Kowal was happy to wait behind his 6/6 flyer.

Ellis bit the bullet and added a Mongrel to his team. This let Kowal add the top card of his library, a second Mystic Enforcer, into play. The Mongrel ran in, trading with one of the Enforcers at the cost of four cards. Realizing his terrible position, Ellis added a Waterfront Bouncer and Winter Orb. 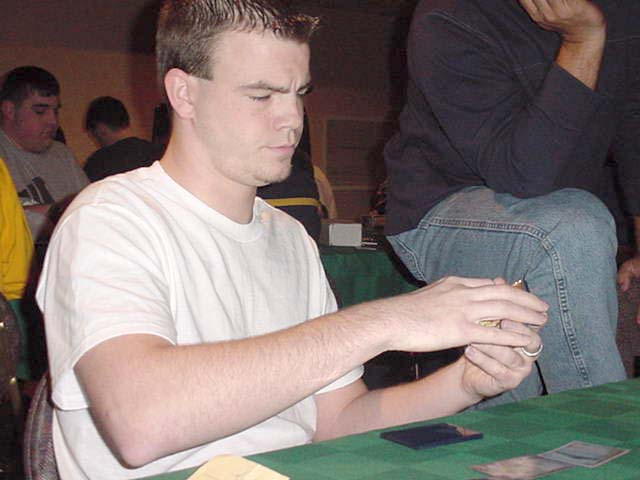 Kowal Oathed up yet another Enforcer. He put the tap on with Gerrard's Verdict. Reflexively, Ellis Forced it. This drew a raised eyebrow from Kowal. Ellis grinned sheepishly as he saw his mistake. But Kowal soon had no cause for feeling superior. With Ellis two Enforcer hits from death, he chose to wait until Ellis's upkeep to Plow his Bouncer. Had he killed it on his turn, Ellis would have Oathed up something meaningless, and then died.

Instead, Ellis bounced an Enforcer and held back. His monstrous Dryad forced Kowal to hold back. Kowal tapped out for Chimeric Idol only to meet Daze. From there, he chumped with two Enforcers before falling.

Ellis had a similar opening in Game 2, but with more sideboard cards. His Land Grant revealed Daze, Annul and Force of Will. Kowal put the gears to him with Duress and Gerrard's Verdict. He got a Pernicious Deed in play, and started hitting with Treetop Village. Oath also resolved.

Ellis's massive card drawing hadn't turned up much. He forced the Oath issue with Werebear. Kowal naturally got an Enforcer. He tried to hard-cast a second, but met Force of Will. Still, he was swinging for six in the air, that was making for a short game. Ellis had an Interdict for Kowal's Pernicious Deed, but that only prolonged the game by one turn. 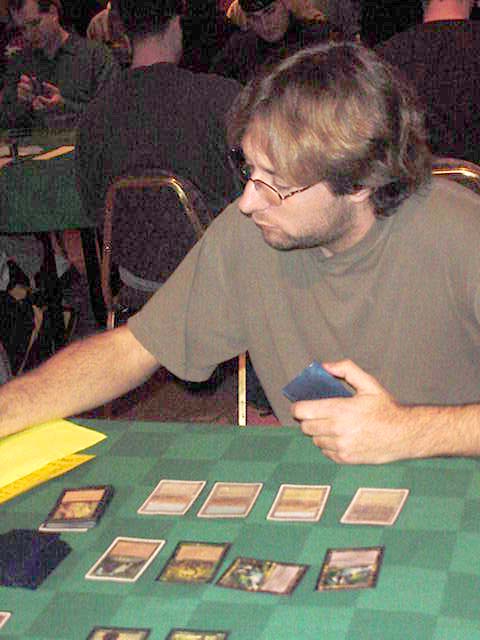 Just ten minutes remained in the round heading into Game 3. Ellis Land Granted twice, before losing a Force to Kowal's Duress. However, he topdecked Legacy's Allure. Kowal had to read it. Kowal came back with Carpet of Flowers. Now it was Ellis's turn to read.

Ellis needed offense. He made a Mongrel, only to watch Kowal drop Verdict and Oath. Winter Orb kept things calm. Kowal Oathed up an Enforcer, but unfortunately for him it was near the top. He was four cards away from Threshold. That meant that his next play of Pernicious Deed was just okay. Ellis's Allure could keep the Enforcer on the wrong side of the table.

As it was, the world got blown up, and neither player had any action whatsoever. The five extra turns passed rapidly. Both players exited the Feature Match area dejected that their comedy of errors would be published for all to see.