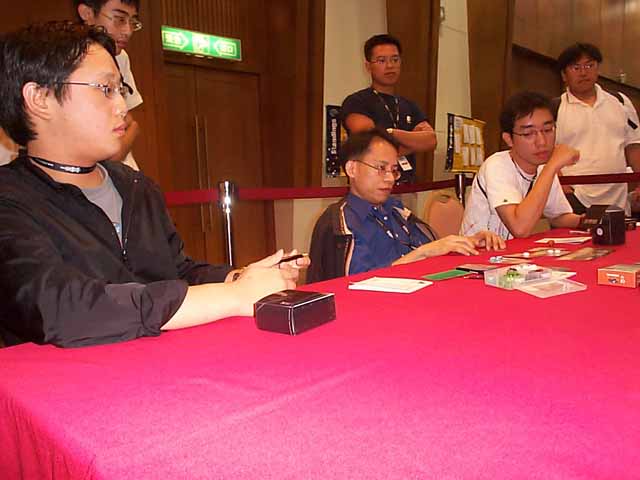 Everyone likes a theme battle, and this round it was Duelling Websites. One could practically hear the banjoes in the air as the auslanders, ABU, took their seats. They were well-rested after their two byes. However, they couldn't rest easy. Champion.com had won their first two rounds on skill alone.

Williams couldn't help but crow as he flipped up his opening hand. He had four basic land types at his disposal, as well as an appealing assortment of monsters. He let the table know how good he felt about the situation, saying "Sick as hell, dog! I am a SAVAGE cheater!".

He used those tools to good effect, bringing out Pincer Spider, Coalition Honor Guard, and Serpentine Kavu, halting an assault of bears from Ngan Shing Hong. 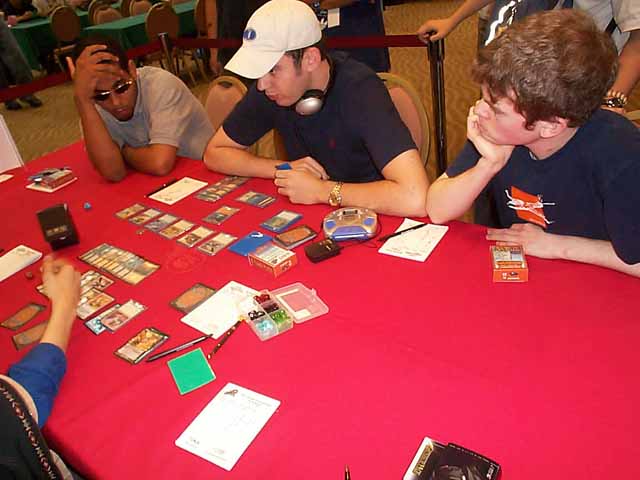 Next to him, Chris Benafel was incredulous when his first two fliers met a pair of Excludes from Au Yeung Hon Ming. Still, he had plenty of reserves, summoning Dromar and Waterspout Elemental. Au Yeung wasn't out of gas, though. He had a kicked Faerie Squadron and a Silver Drake, and bounced Dromar with Angelic Shield. Benafel joked that he must have another Exclude. Au Yeung showed him Undermine instead. Benafel practically fell out of his seat.

At first glance, Dan Clegg's situation was precarioius. His opponent, Stephen Ho had out Treva, the Renewer, and a Coalition Honor Guard to protect it. Good thing Clegg packed extra bullets. He Demised the flagbearer at end of turn, untapped, and Annihilated the dragon. He even had an Illuminate back when Ho busted a 5/5 Anavolver. Ho scooped.

Benafel's troubles with Au Yeung continued, as his draws yielded only more land. Eventually, Au Yeung found a way around the Waterspout, a Benalish Trapper, and took the first game.

Dave Williams was mired in his game against Hong. His Cloaked Llanowar Knight died to a Mire Kavu, and he hadn't drawn any action to get through Hong's defenses. It turned into a slugfest, with creatures swinging rapidly on both sides.

In Ho's second game against Clegg, he had the upper hand early, with a Cloaked Razorfoot Griffin causing Clegg no end of difficulties. Matters were made worse by Ho's Crimson Acolyte. He needed a banish, and in a hurry. He drew only more ground creatures, not enough to race Ho. 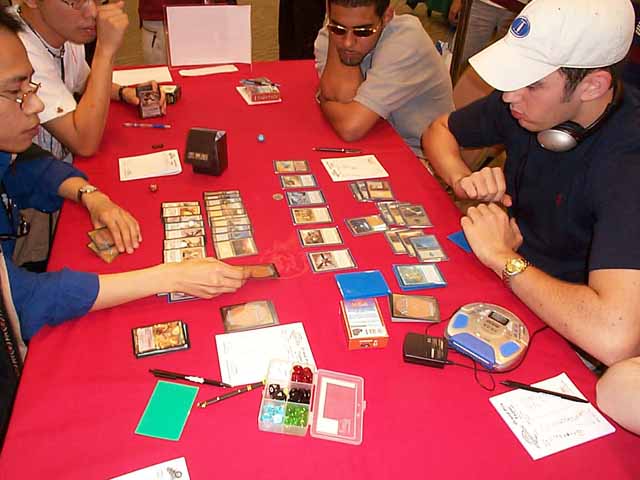 Hong had finally stabilised against Williams. He had to fall to one to do it, but Williams's draws were co-operating, yielding land. He only found more creatures after Hong's spot removal had decimated his team. By then, Hong's Duskwalker had put on a new pair of beat-you-up boots.

Au Yeung had Benafel right where he wanted him in Game 2. He used Benalish Heralds to bring an airforce to bear agains Benafel. Benafel was caught without black mana early, and had to Probe without kicker to find it. His slow start punished him, and was at five before he fought through Au Yeung's counters to bring out Dromar. From there, the game stalemated.

Clegg did his best to race a growing army from Ho with his kicked Duskwalker. He had a couple of chump-blockers making things easier on him, as well as Backlash and Urza's Rage. It didn't hurt that Ho's mana was a little clumsy, operating off of forests and one Lair. He took the first match for ABU.

Champion.com quickly evened things to one match apiece, as Williams was stuck with a board of forests, and Hong capitalized on his plight with monsters and removal. Williams didn't get to play his Llanowar Knight until Turn 6. Hong finished him with Breath of Darigaaz.

And so it all came down to Au Yeung v. Benafel. Unfortunately, it was anticlimactic. With Au Yeung up a game, and the board horribly deadlocked, there was nothing Benafel could do to wrest a win and force a tie.