Round 4: Andrew Stokinger vs. Rob Dougherty 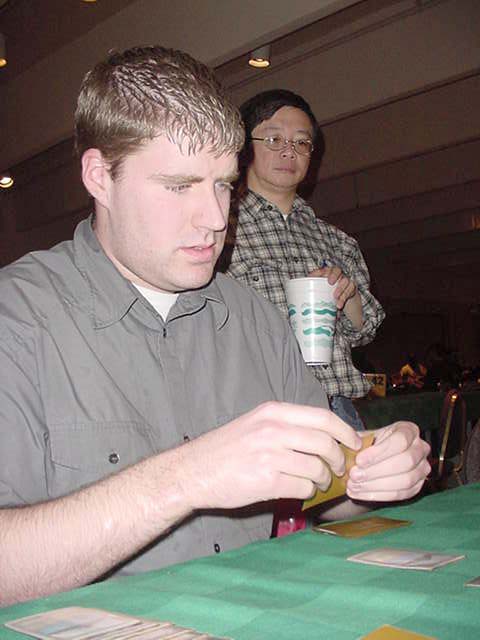 Your Move Games's Rob Dougherty surprised no one by showing up this weekend with Wild Zombies in tow. His opponent, upscale website operator Andrew Stokinger made several references to "Rob's Zombies", but lamentably, Dougherty had no pictures of the legendary head of White Zombie to use as tokens. The nearest he could manage would have been to draw dreadlocks on his Unglued tokens. No jokes were made about Stokinger's Miracle-Gro.

Dougherty's one-land hand failed to pay dividends. He needed just one more to bring out his twin Hermit Druids. He waited patiently while Stokinger hit with Werebear, Wild Mongrel and Quirion Ranger. Dougherty finally found a Llanowar Wastes. His Druid was Foiled, putting Stokinger at Threshold the next turn. Dougherty fell to nine.

But Dougherty's Wild Mongrel stuck. His full hand let it take down the Werebear in combat, and live to tell about it. The pitched cards included an Ashen Ghoul, which popped into play the following turn. This defense helped him weather the Werebear that Stokinger topdecked. He played the Druid's ability, getting the full four Krovikan Horrors in hand, and getting another Ghoul on the board. 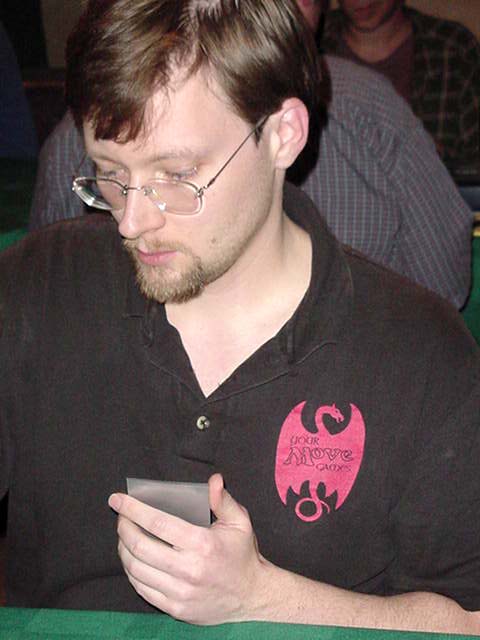 And then, something remarkable happened. With more than thirty cards left in his library, Dougherty activated his Druid. Just one land remained in his library. Unfortunately, it was the second-to-last card. Dougherty scooped.

Dougherty's bad luck continued as he had to mulligan in Game 2. He led with Wild Mongrel, and Stokinger answered with Waterfront Bouncer. He even had Force of Will to stave off Dougherty's Firestorm. Dougherty had Zombie Infestation, but nothing to power it. Gushes kept Stokinger's hand full.

Soon, he was sending with Werebear. Quirion Ranger made sure that the Bouncer could keep any troublemakers off the board. Stokinger burned through his hand, winning the match in short order.