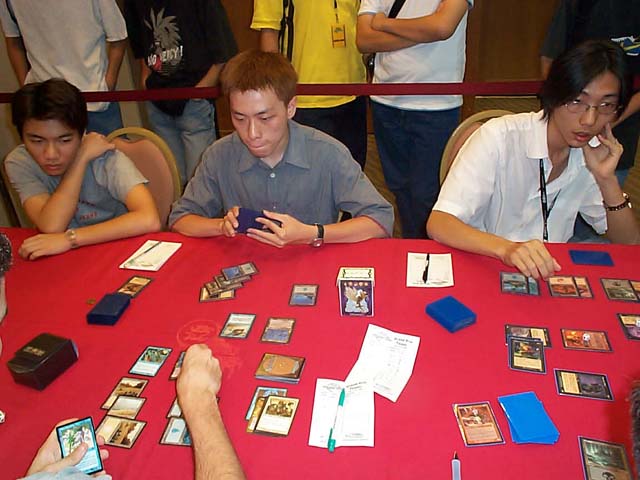 This round saw visiting would-be conquerors Antarctica square off against Team T.T.T., Taiwan's best limited team. The winner would be at a comfortable 5-0, looking good for the dreaded Day 2.

In a battle of diabolical masterminds, Jon Finkel faced down the unflappable Doctor Wong. The Doctor was on the offensive early with Galina's Knight, and Finkel took it, building his defense with Angelic Shield, Tower Drake and Benalish Heralds. Wong made a Metathran Aerostat, and Maliced the card-drawer. Finkel rescued with the Shield. He was behind in the race, and Wong turned up the pressure with a kicked Faerie Squadron.

Things were looking better for the Antarcticans in Dan OMS's match. Dell Sun had stalled at two plains, and OMS was quick off the mark with Phyrexian Rager, Quirion Sentinel and Alpha Kavu. He made short work Sun, who drew his forest too late.

Steve OMS and Tsu-Ching Kuo were stuck in the Red-Black mirror. Though it seemed Kuo had the upper hand, with Duskwalker and Pouncing Kavu, both kicked, OMS kept the pressure off with a Nightscape Familiar. It soon found Sinister Strength, further frustrating Kuo's attacks. 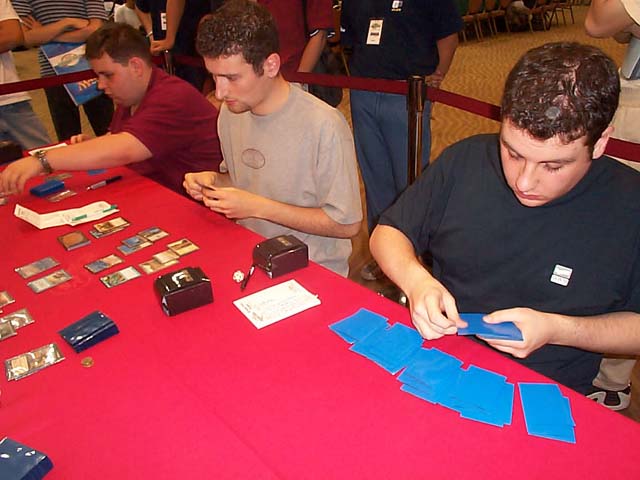 Finkel tried to bait Wong into his Exclude, Repulsing his Squadron, but Wong was too busy destroying Finkel's creatures. First the Heralds fell to an Agonizing Demise, then Exotic Curse took out his Tower Drake. Wong then had the gall to Probe with kicker. Finkel finally tapped out for Faerie Squadron. Wong recast his.

Scorching Lava took out Steve OMS's Familiar, and Kuo's creatures poured into the breach. Steve blocked as best as he could, but had no gas of his own. A Kavu Runner from Kuo ended the game in his favor.

Both Dan and Dell were slow to start their second game. This suited Dell just fine, as it gave him time to hit his fatties. He even had Gerrard's Command ready to take down Dan's Ebony Treefolk. A hasted Serpentine Kavu put Dan at eight, and forced him to consider his options.

Meanwhile, Finkel folded like the Sunday paper after Wong brought back a pair of dudes with Urborg Uprising and then continued his mad card-advantage rumble with Benalish Heralds. 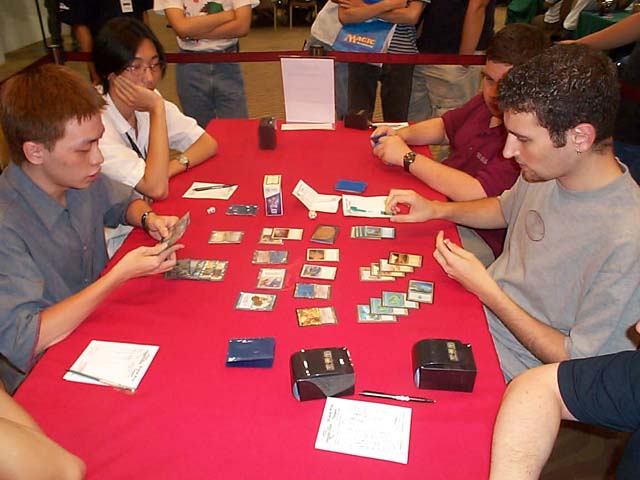 Dan OMS held his head in his hands, realizing that his best option was to drop Alpha Kavu and Phyrexian Rager, and hope that Dell was out of gas. When Dell passed the turn back, his mood brightened.

Steve OMS had to face a Flametongue Kavu twice, and that's never a good thing. He Bogged Kuo down, removing Plague Spores, Pouncing Kavu, and Shivan Emissary, but Kuo held onto Recover, bringing back the brutal uncommon. OMS's last hope was a Dwarven Patrol, and Kuo topdecked Agononizing Demise to end their match with style.

Dan OMS's good mood continued to grow, as he sent his Phyrexian Reaper into the Red Zone again and again. Dell's draws weren't up to the task, however, and a brutal all-out assault put him out of his misery. The teams were tied at one match apiece.

This left the Evil Geniuses to duke it out. Wong had the upper hand, attacking in the air with Haunted Angel. Finkel's Trapper kept his Squadron at bay. The Doctor kicked up an Urborg Emissary to send the Trapper home. Instead of taking six from the airborne attackers, Finkel returned the favor with a kicked Rushing River.

His Angelic Shield and Lashknife Barrier meant that his bears on the ground could attack past The Doctor's defenses. The race was on, albeit a slow one. There was back and forth, and Wong seemed ahead at each step. Finkel was playing on an empty hand, and The Doctor held many cards.

His air force hit play again, and Finkel took slow beats. Every time he found an answer, it seemed that Wong had drawn another flying threat. He finally stabilized with Shackles, Trapper, and the dynamic duo of Coalition Honor Guard and Disciple of Kangee.

Now Wong had his Heralds active, and started to up the ante. He recursed his Urborg Emissary, Maliced the Honor Guard, and sent the Trapper home once more. He had a flying brigade of Cavern Harpy, Haunted Angel, Glimmering Angel and Metathran Aerostat. Finkel only had Repulse and Angelic Shield. His four life was not enough.