Round 6: Alex Shvartsman vs. Bill Macey 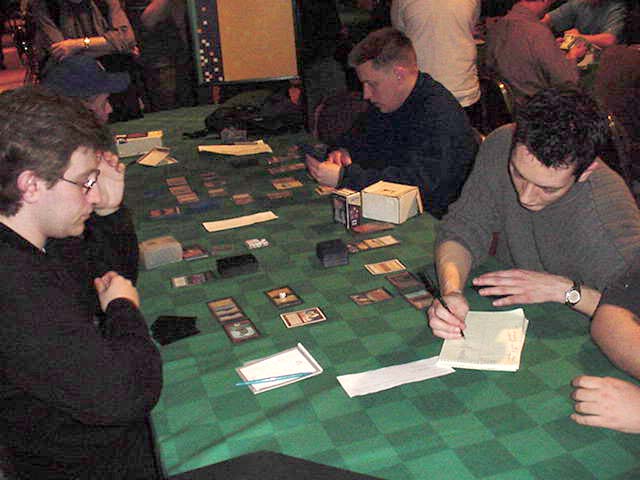 This round, it was Austin's own Bill Macey (piloting the aggro-oath deck constructed by Dan Flood and Brian Kowal) against Alex Shvartsman, world traveler and citizen of Earth. Shvartsman was playing the tournament's most popular deck, Miracle-Gro.

Joining the match in progress we find Shvartsman having been pummeled on by a pair of Treetop Villages, but making a fair race of it with Werebear and Gaea's Skyfolk. The life totals were seven to eight in Macey's favor.

Macey tried for a steal with Oath of Druids. Unfortunately, Shvartsman had Force of Will. Macey had a second Oath, but it mean tapping too low. He wouldn't be able to activate both Villages and double-block the Werebear. Shvartsman attacked, and made a second Gaea's Skyfolk. Macey conceded rather than show Shvartsman his Mystic Enforcer.

"I'm confused! I mean, I've seen all these good cards before, but in three or four different decks!" - Alex Shvartsman 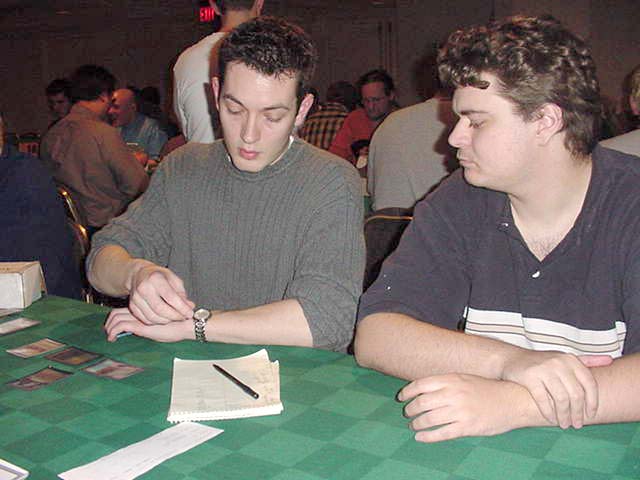 Shvartsman brought the pain quickly in Game 2. He made a Quirion Dryad, busted out Curiosity, and tied things up with Winter Orb. Things looked lost for Macey when Shvartsman Forced his Plow, but it only cleared things up for Mystic Enforcer.

Now the shoe was on the other foot. Shvartsman had even played a Werebear the turn before. He tried to suicide it, but Macey didn't bite. Macey even did his best to give Shvartsman a chance, activating a Chimeric Idol so he wouldn't be able to Oath up a third 6/6. He still managed to win.

Game 3 was a slapdash affair. Shvartsman again started strong, with Land Grant foreshadowing Gaea's Skyfolk, Curiosity, and two Dazes. The Skyfolk came down, was followed by a Quirion Dryad and then got very curious. Macey tried to Plow, but met double-Daze.

Lucky for him he had the second Plow. Still, he had a 4/4 Dryad beating him down. It was joined by a Werebear. Five cards sat in Shvartsman's graveyard. Macey tried a Deed, but Shvartsman was ready with Emerald Charm. A second Curiosity hit the Dryad, and Brainstorm put him to Threshold. His attack put Macey to six. 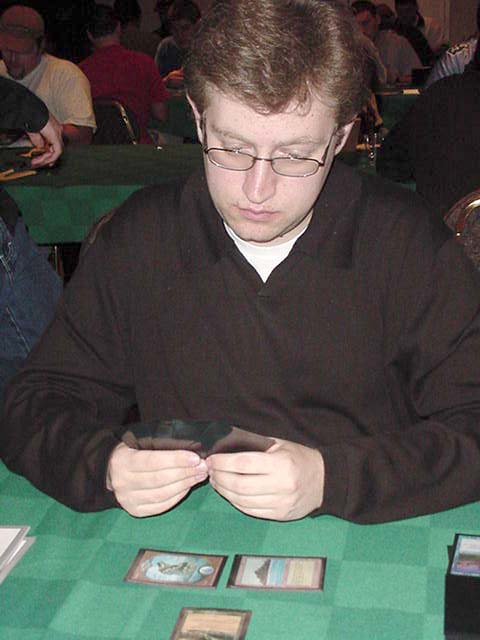 Macey came back with Wrath of God. Shvartsman had no counter. He tried to rally with another Dryad, but Macey was ready with a second Deed. Then Macey dropped Carpet of Flowers. He made a Chimeric Idol, and swung with two Treetop Villages. Suddenly, Shvartsman was under the gun.

He Submerged. And a second time. And a third time, but Macey kept swinging. Werebear hit the table, but it was too late. Shvartsman succumbed.