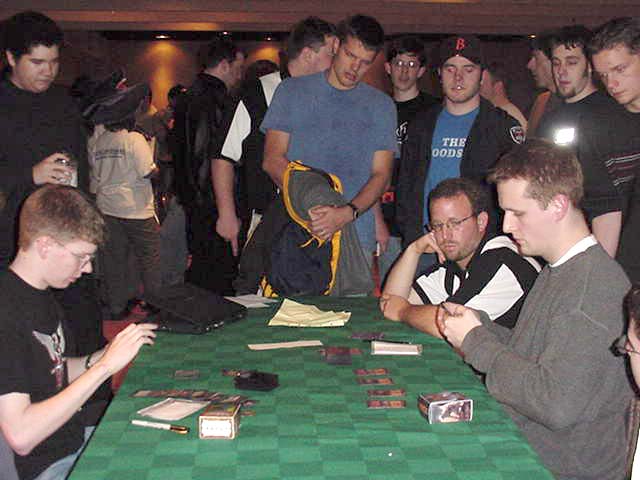 Well, you all know former Pro Tour Champion, Bob Maher, Jr. He's been doing pretty good today, and playing Sligh, no less. He's cut a swath through some tough matches (including one against The Rock that saw him beat Verdant Force), and now is one win away from the top of the standings. In his path is Bryan Hubble, who has enjoyed multiple Pro Tour Top 16's in his career. He's running a modified version of Miracle-Gro to include a stronger Merfolk line, as well as main-deck Sigil of Sleep. It's exactly the sort of thing Maher's Sligh should eat for breakfast.

Hubble chose to keep a one-land hand. He failed to find land, and discarded Winter Orb. Maher meanwhile had made a Mogg Fanatic. He tried Ball Lightning, and met Daze. A second Ball Lightning earned a Force of Will.

Finally, Hubble Sleighted into Land Grant, and showed Maher Gush, Quirion Dryad, Gaea's Skyfolk and Foil. Maher held four cards. He untapped and made a Jackal Pup and another Fanatic. Down came the Dryad. Hubble tried to charge up with another Sleight, and that got Maher to thinking about the Gush waiting in the wings. 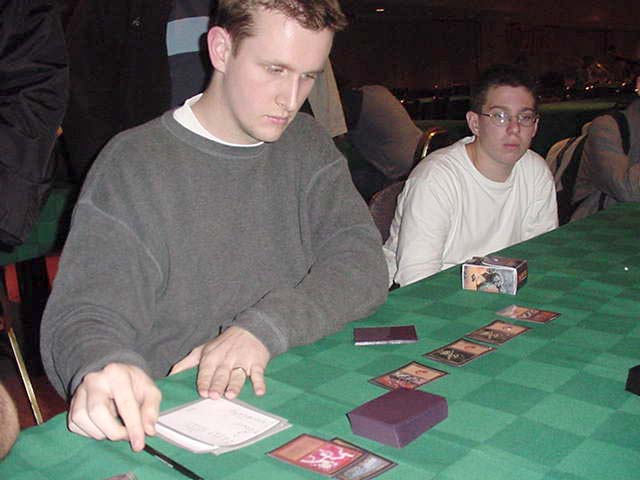 Maher decided to go for it, sacrificing a Fanatic. Hubble responded with Gush. Maher flung the other in response. Hubble trumped by Foiling his own Sleight. Now Maher was facing a 4/4 Dryad. He untapped and pondered. He chose to Fireblast. Hubble had no response.

Hubble's window was small. He made another Dryad and Manta Riders. Maher went one better, with lands and Cursed Scroll. He uttered the ominous phrase "I'll Scroll you, naming Fireblast.", and then Hubble was dead.

Hubble had to mulligan a no-action hand for Game 2, and made no secret of how bad his hand was. His six cards were acceptable. They let him Brainstorm into Land Grant, revealing Winter Orb, card drawers, Foil and Daze. 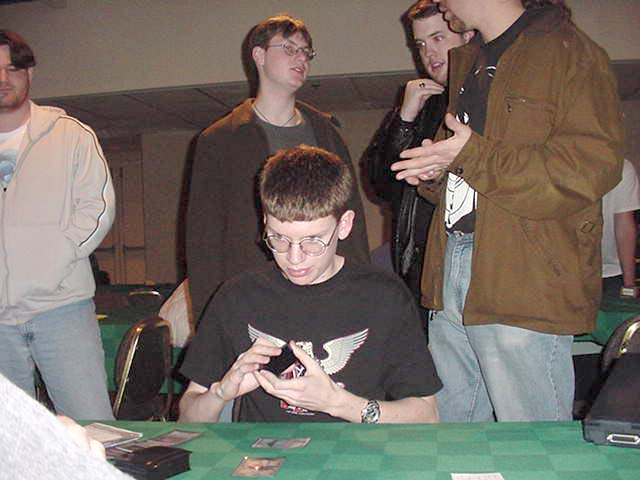 Maher answered his Tropical Island with Wasteland. Hubble failed to Brainstorm into a third land. He practically jumped out of his chair when Sleight of Hand got him an island on the next turn. Meanwhile Maher had hit four lands, and played Ball Lightning. Hubble ate it. His island had gotten him a Quirion Dryad. It went to 2/2 with Brainstorm.

Then, another Lightning from Maher. Hubble chose to block. Maher wasted no time in splitting the damage two to four. Hubble had no instants, and put his Dryad in the graveyard. He dropped Winter Orb. Maher waited. He had time.