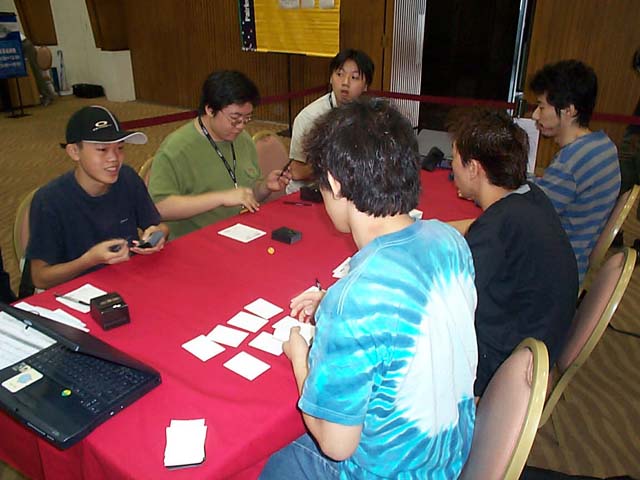 Wrath of God are a visiting team from Hong Kong, and closed out Day 1 in second place with a 5-0-1 record. They were paired up today against Fire Beat, one of the three Japanese all-star teams in attendance. The draft was tough on Wrath of God, with the experienced Fire Beat settling into powerful color combinations early. Seeing the strength of Tsuyoshi Ikeda's deck, Sun Kit Yeung sacrificed his own deck to strengthen those of his teammates. His success will be determined by this match.

Yeung erred as he began his first game against Ikeda. Choosing to go first, he asked Ikeda if he wanted to mulligan. Ikeda took this to mean that he did not want to mulligan, and so took a mulligan of his own. Then Yeung began to mulligan his hand. Head Judge Jacky Yang was called in to officiate, and ruled that Yeung would be given a game loss.

As this was resolved, Lam Yan Kung was beating down Jun Nobushita. Nobushita managed to stop the initial onslaught, but had no answer for Questing Phelddagrif. The hippo took to the air, and though it gave Nobushita a bunch of extra cards to work with he was unable to take the damage it sent his way. He succumbed. 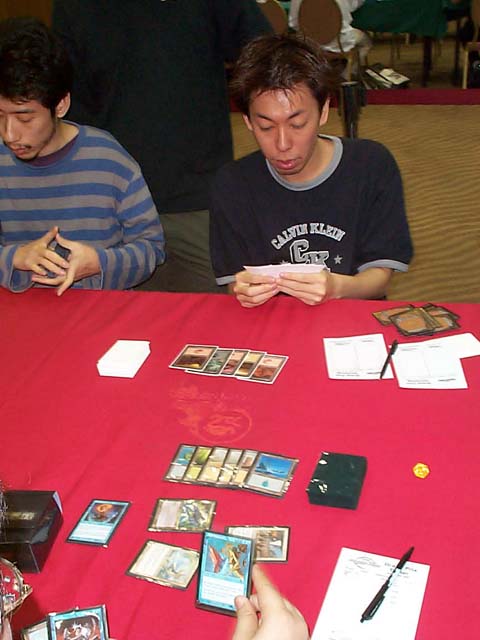 At the far end of the table, Toshiki Tsukamoto was being downright unfair to Ip Chi Wai. While Wai stalled at three lands, Tsukamoto helped his predicament by doubling-up on Hunting Drakes and then reusing one of them with Repulse. Then he removed Wai's hand with Hypnotic Cloud. His air force made short work of Wai.

Yeung's second game against Ikeda was a disaster. His early beats with Phyrexian Battleflies and Morgue Toad were cut short by an Urborg Shambler. It then found Foul Presence, and began to pick off Yeung's black creatures. Still, he managed to hold the fort behind a Mire Kavu. That is, until Tahngarth showed up for Ikeda. The game ended in three turns.

But Wrath of God were not out of it yet. Kung rode his mana-curve over a forest-poor Nobushita. He had five creatures in play before Nobushita cast a spell. That evened things at a match, and a debacle, for each team.

However, Wai was in trouble against Tsukamoto in their Game 2. Tsukamoto matched his early beats with Putrid Warrior and Phyrexian Rager. In a key moment, when Wai tried to salvage a trade with Fleetfoot Panther, Tsukamoto had the Exclude. This let him take to the air with Silver Drake and Aurora Griffin without fear of a counterstrike. 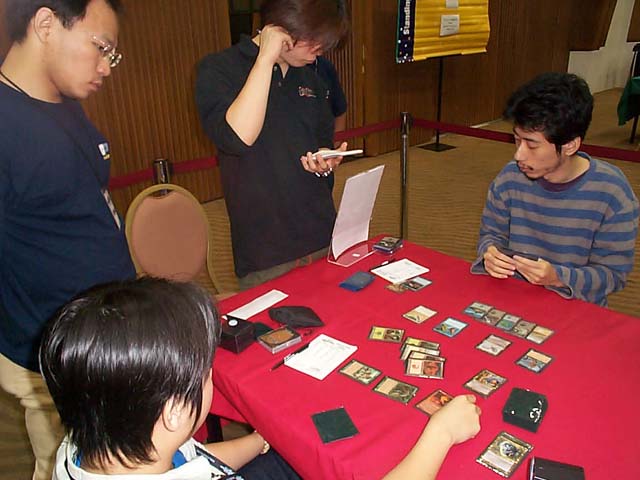 Wai slowed things down with Dueling Grounds, but it looked like he was on the wrong end of the race, unable to stop the Drake. Tsukamoto further frustrated him with Benalish Trapper. Tsukamoto was then given a caution for slow play. His deliberate pace didn't suit the board position, which had him sailing through the air unopposed, holding a Dromar's Charm for any funny business.

He let his opponent buy himself a turn with Rith's Charm. He stopped his attempt to kill the Drake with Orim's Thunder.