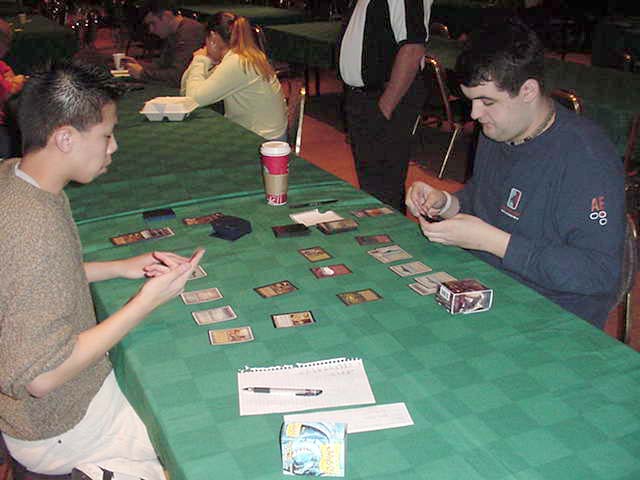 This Round 8 feature match pitted two of the tournament's undefeated players against each other. Good friends Ken Ho and Baby Huey both had much success yesterday with decks that most would consider Tier 2 - Huey is playing an old school Oath of Druids deck featuring the Intuition/Accumulated Knowledge combo, while Ken is playing just regular good 'ole Slivers. Both players have also had success when it comes to the Pro Tour, with Ken Ho finishing high enough last year to put him in 2nd in the Rookie of the Year race, while Huey has many accomplishments, not the least of which is winning the very first Masters Series.

Huey won the die roll, and Ken had to mulligan. Both players lead with a Tundra, and Huey Wastelanded on Turn 2. Ken wasn't having any mana problems, though, as he followed up with Scrubland. Huey cast Ice on Ken's Scrubland during his next upkeep, preventing Ken from casting any 2 casting cost spells, and then Huey cast a main step Brainstorm, and dropped a Flood Plain. On Ken's next turn, he went for a Meddling Mage and it resolved naming Oath of Druids, but Huey Plowed it during Ken's end step.

Huey chose to merely drop a Treetop Village on his 5th turn, and Ken went for 2 Hibernation Slivers, both of which resolved. During Ken's end step, Huey made the familiar play of casting Intuition for 3 Accumulated Knowledges, and, with Ken tapped out, he was free to cast it on his main phase to draw 3 cards. Next Huey dropped an Oath of Druids, but Ken merely attacked with his 2 Slivers and then attempted to play a Seal of Cleansing. A large counter war was fought, with Huey casting Force of Will twice, removing Brainstorm and Disrupt, and Ken also Force of Willing twice, however having to return both of his Hibernation Slivers to his hand in order to do so. The Seal eventually resolved, and Ken passed the turn, with no creatures on the board.

Huey drew 4 cards with Accumulated Knowledge on his next turn, while Ken played a Muscle Sliver. Ken passed the turn, however, forgetting to use the Seal of Cleansing on the Oath of Druids, thus allowing Huey to Oath up an Ancient Hydra. This play all but ended the game for Ken, who had no cards in his hand.

For Game 2, both players brought in 4 Pyroblasts, with Huey also bringing in an additional Oath of Druids, and Ken bringing in more Disenchants and Planar Voids. Huey was forced to take out semi-useful cards, however, such as Fire/Ice and Seal of Cleansing, while Ken merely exchanged his useless Swords to Plowshares and Winged Slivers. 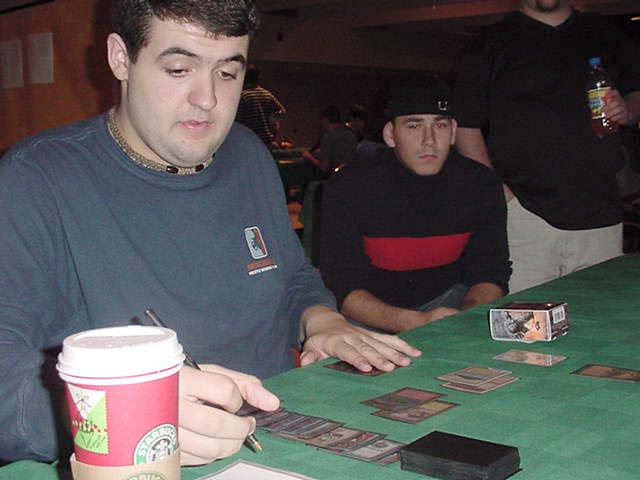 Ken chose to play first for the second game, and neither player had to mulligan. Ken played a Turn 2 Seal of Cleansing and Turn 3 Crystalline Sliver, to which Huey responded with a Brainstorm, and then sacrificed his Flood Plain to get a Tundra and cast a second Brainstorm, but the Sliver ultimately resolved. Ken attempted a Muscle Sliver on his 4th turn with 2 lands open, which Huey Counterspelled. Ken had the Pyroblast, however, and Huey Disrupted it forcing Ken to tap one more, but the Muscle Sliver still came out. Huey took the beats from the 2 Slivers on Ken's next turn, and during Ken's end step he cast an Accumulated Knowledge for 1 followed by another Accumulated Knowledge for 2. On his main phase, Huey Wastelanded Ken's City of Brass, leaving Ken with only 3 mana available, and cast an Oath of Druids.

Ken was not very worried though, as he still had the Seal of Cleansing on the board, which he sacrificed to kill the Oath of Druids. He attempted a Duress on Huey as well, but Huey Countered it. On Huey's next turn, he Gaea's Blessinged the Oath of Druids and 2 Brainstorms back into his deck, and then cast an Oath of Druids. Ken attempted to Counter, but Huey had another Disrupt, and this time it was enough to stop the Counterspell. Ken cast a Seal of Cleansing on his turn, and Huey had no mana open to Counter. This spelled the end of the game, as Ken attacked with his 2 Slivers to send Huey down to 2 life. Huey untapped, drew, and, with no answers to the Slivers on the board, conceded. 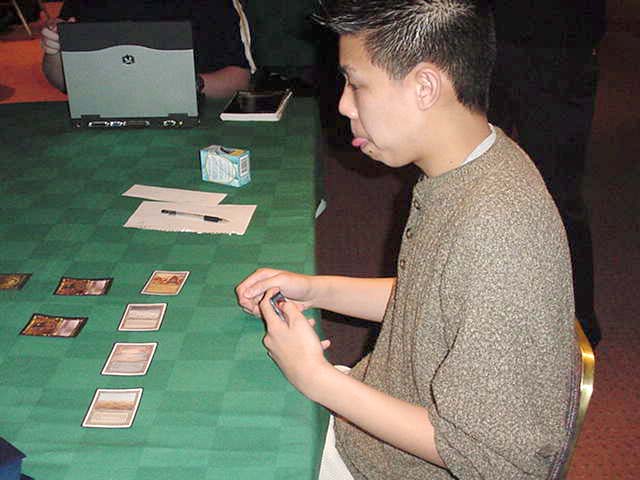 Neither player made any changes to their Sideboards for the last game, and Huey chose to play first. He cast a Brainstorm during Ken's end step, and then cast an Oath of Druids on his 2nd turn, which Ken Force of Willed, removing Meddling Mage from the game. Ho then cast a Crystalline Sliver on his 2nd turn, which Huey let resolve, and attempted a Muscle Sliver the following turn, but Huey Counterspelled it. Ho then cast a 2nd Muscle Sliver and a 3rd Muscle Sliver on his 4th turn, and Huey let them both resolve. Facing 10 points of damage the next turn, Huey Intuitioned for 3 Oath of Druids, and cast the Oath on his main step, and Huey took 10 points of damage to go to 4 life. Ho also cast another Crystalline Sliver, but Huey had a Pyroblast for it. Facing a very difficult situation, Huey commented "I've seen worse", and activated the Oath on his upkeep, getting a Morphling. The Oath activation placed 2 Accumulated Knowledges in the graveyard, so when Huey cast a Knowledge for 3, Ken used his 1 card in hand to Counterspell. Ho then attacked with the 2 Muscle Slivers and 1 Crystalline Sliver, but Huey blocked the Crystalline with the Morphling, pumped it to a 5/1, and after damage was on the stack, he Plowed his own Morphling, gaining 5 and taking 6 from the 2 Muscle Slivers, going to 3. Ken had drawn a Crystalline Sliver on his turn, however, and that spelled doom for Huey, as there was nothing he could Oath up to save him.

2 Seal of Cleansing 4 Swords to Plowshares

2 Winged Sliver 4 Counterspell 4 Force of Will