Round 9: Brian Kibler vs. Robert Maher 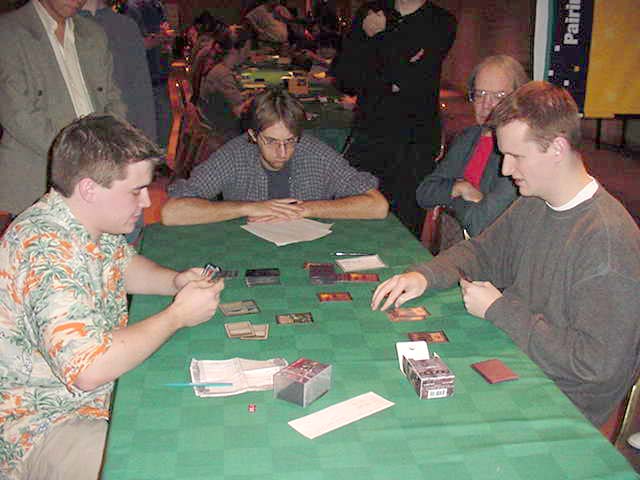 Maher is one of the games most successful pros. He was player of the year in 1999 when he became what must be considered the master of extended that year. He won the extended PT and an extended GP with the Oath of Druids deck he made famous.

Kibler is one of the internet's most popular writers. His "Top-notch Tech" is copied by internet magic junkies worldwide. Kibler is well known for his deckbuilding talents. Usually almost half of the name American pros will be piloting one of his constructions at a given constructed GP.

Top-notch tech this time is a Rubin/Kibler modified version of Comer's now immensely popular Miracle Grow deck. It seems like everybody chose the deck for this GP. The Rubin/Kibler version has several innovative modifications. Mainly the inclusion of white for the environment defining Swords to Plowshares and the grossly undercosted beatstick that is Mystic Enforcer.

Maher has chucked his Oath deck out the window. Even he won't beat a dead horse this long. Instead he decided to follow in his father's footsteps from GP Vegas by playing that classic hit, the Sligh deck. 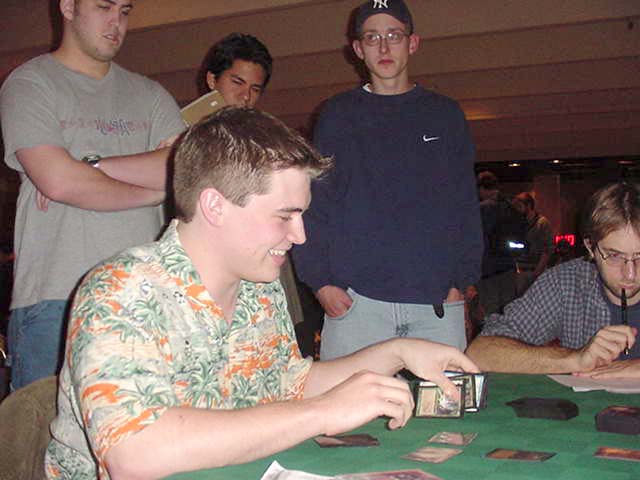 Maher had just finished getting thrashed by Rubin the round before. I watched the whole thing. It wasn't pretty. He actually tested the matchup with Kibler and admitted to getting destroyed. Kibler actually called out this pairing between rounds.

Kibler won the die roll and went first. Maher got a first turn Pup and Kibler dropped a Winter Orb. This is actually a very bad thing for the Sligh deck. Despite being a deck with many low casting cost spells, it must rely on its Ball Lightnings and Incinerates to win the race. The Grow deck is more efficient and should usually win the race.

The Orb didn't bother Bob that much since he was stuck on one land. He got out two Mogg Fanatics. Kibler's draw lacked creatures. He plowed the Pup, but then got beaten down to 9 life by the fanatics and random burn. Then he got a Mystic Enforcer out though, and this halted the attack. Maher seemed optimistic that he could trade 2 damage for 6 at this point, but Brian dropped Werebears on the next two turns.

It seemed Maher was out of the game, but he went for the win anyway. He got a Ball Lightning and a Fireblast countered. Maher's Firebolt on the next turn resolved, dropping Kibler to six. With Maher at only ten life, Kibler swung for 14. Maher chumped with his two Fanatics and this knocked both players to 4. When Kibler tried to Gush for cards to lock up the game though, Bob played Fireblast in response and Kibler was unable to counter. 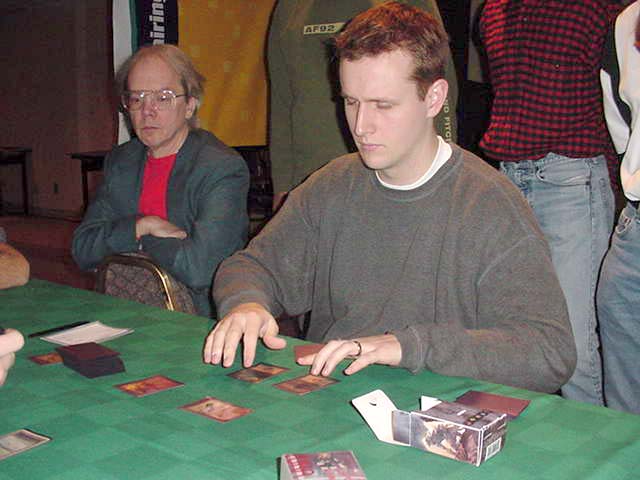 The next game seemed out of Maher's reach too. He spent the entire game dealing with Kibler's gigantic creatures. He stopped the Quirion Dryad easily enough with a Mogg Fanatic. Kibler's fourth turn Werebear with threshold on the other hand seemed to be more of a problem. Maher traded his Incinerate and Seal of Fire for it.

Kibler dropped a 6/6 Enforcer two turns later and Maher was forced to Fireblast and Seal it. Next up on the fatty list for Kibler was another 4/4 Werebear. It knocked Maher down to 9 before Bob was able to use Firebolt and Barbarian Ring to kill it. The only creature that Kibler could get out after this was a Quirion Dryad that he could only grow to a 2/2. This seemed to be doing the job, knocking Bob down to 3. Kibler, however at a mere 15 had no counters to stop a Price of Progress for 10 and a pair of Fireblasts.