Rules Are Also Made To Be Followed

efore I begin, an apology is in order. While I feel that this column has been extremely valuable and has done a great job at doing most of the things that Scott Johns and I set out to do it is indisputable that the error rate has been unacceptable. When I write one of these columns, I open up all of my thinking about the situation in question to close examination, and that means I need to catch all of my mistakes at every stage of the process. (Scott helps with the actual writing, but when it comes to strategic or card-based mistakes it's a lot tougher for him to catch them given how much time he has to work on any given article.) Normally the mistakes stem from my focusing on making sure I don't make a mistake in what I consider the heart of the puzzle, causing me to lose focus elsewhere. No matter what the reason, I along with the rest of us at magicthegathering.com recognize that we need to do a professional job and give you a mistake-free column week in and week out. I pledge to you that we will do whatever it takes to make that happen and will continue to experiment with the format to find out what it is and is not capable of.

However, I hope that the challenges I've run into with this column have highlighted just how much goes into playing Magic well. Mike Turian is famous for having once said that he didn't think he'd ever played even one game of Magic perfectly. I'm sure anyone who tried to write this kind of column for even a couple weeks would quickly feel the same! There is sometimes this crazy misconception that once you get to a certain level of skill Magic is mostly luck. I hope what we've done so far in this column combined with the excellent dialogue in the forums has opened some people's eyes to the depth of strategy actually involved. I've played with and against the very best players in the world, and I can tell you with absolute certainty that nobody, nobody, plays perfectly. There's always more to learn, more that could be done better, and though it makes a column like this difficult, it's also why it's so important, and one of the big reasons why Magic is such a great game.

Scott and I will be making some significant changes over the coming weeks and months both in how we put the articles together and also what the scope of the column is, and I feel that the plan in place should make for some big improvements. The beginning of changes should start showing up next week, so any comments in the forums will be appreciated.

Which brings us to this week, which will be the final article written in the current style. A lot of what makes Magic so hard to play is that you don't know which aspects of the game are important and which ones are irrelevant. One of the hardest and most valuable skills of all is figuring out what is going to determine who wins the game and what is worth focusing on. This week the focus is on basic principles, so I'll be using exaggerated, created examples to highlight what we're talking about. The point here isn't how you end up with these kinds of decks, but instead what the situations in question can teach us. 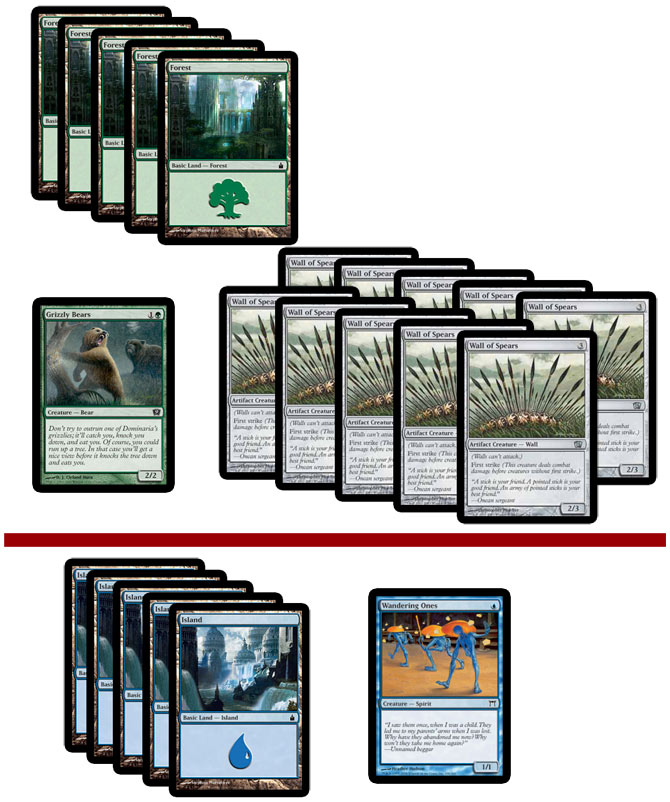 Your opponent attacks with Grizzly Bears.

No, even though you will never be able to attack with Wandering Ones. It's not impossible that you will end up making this block on a future turn but there is no reason to do it now. There are a lot of things that could happen and many of them give you a better use for a 1/1 creature. If a bigger creature comes out, blocking that creature for a turn will stop more damage than you stop by blocking now. If you draw another 1/1 you can use both to kill the Grizzly Bears, or otherwise use the 1/1 to give you the last point of damage to kill an attacker. Take the damage now and if necessary you can block later.

Two. Block only if you would die. If he wants to send you to one you should let him. He has no cards in hand so there isn't even a risk that he'll use a trick to kill you. You should only block in these situations if you feel that not blocking would leave you at a dangerous life total. For example, if your opponent is known to play four copies of Lightning Helix and hadn't played one yet then you could strongly consider blocking to avoid going down to three.

It is your precombat main phase.

(The face down cards in hand are irrelevant for this, so we're skipping them.)

This one is also standard procedure. Your opponent doesn't know that he won't be able to attack back and he doesn't know that he can safely trade off both bears. Right now you're on the offensive and both creatures are identical. He might fear a trick, he might want to trade damage and he might even have an Aura he needs to put on the Grizzly Bear. You play Forest and attack in the hopes of getting in two free damage, but if he blocks you have no problem with that either. After that, you cast Trained Armodon. If you cast Trained Armodon first, you're both making it safe for your opponent to block and letting him know he won't be able to attack you back.

Simple stuff right? A lack of understanding of these principles is one of the first things I look for when trying to assess the strength of an unknown player. Note that I say that I look for a lack of understanding rather than understanding. They can get it right and be terrible, but it's almost impossible to get things like this wrong and still be good. (Read that sentence twice, it's worth it.) When you sit across from a player you want to quickly get a handle on how strong your opponent is in case the answer changes one of your decisions. There is a small list of plays that are almost never correct and that good players reflexively avoid. These are two of the big three: Chump blocking way too early and giving away information. The third is casting a spell that you could have cast later at no cost and then drawing extra cards, rather than drawing the cards first in case seeing those cards makes you decide not to cast the original spell or to cast it with different mana sources. A bell goes off in my brain: Don't take unnecessary risks. This match is yours to lose.

That doesn't mean there are no exceptions. Every now and then the ‘wrong' decision will be the right one. Like anything else complicated, the more you understand the basics the more you'll know when to break the rules of thumb and why. When a player I know isn't bad starts pointing burn at my head on turn two or making what seem to be highly wasteful attacks or blocks it is a huge sign that there is something unusual going on. If he's throwing away creatures to stop damage there's a good chance that something he is about to do is going to wipe the board or otherwise render his creatures irrelevant. If he's burning cards to do relatively small amounts of damage to you then you're probably much closer to zero life than you think you are. The better read you can get on your opponent's skill level, the more weight you can ascribe to his strange-looking actions.

It is your precombat main phase. 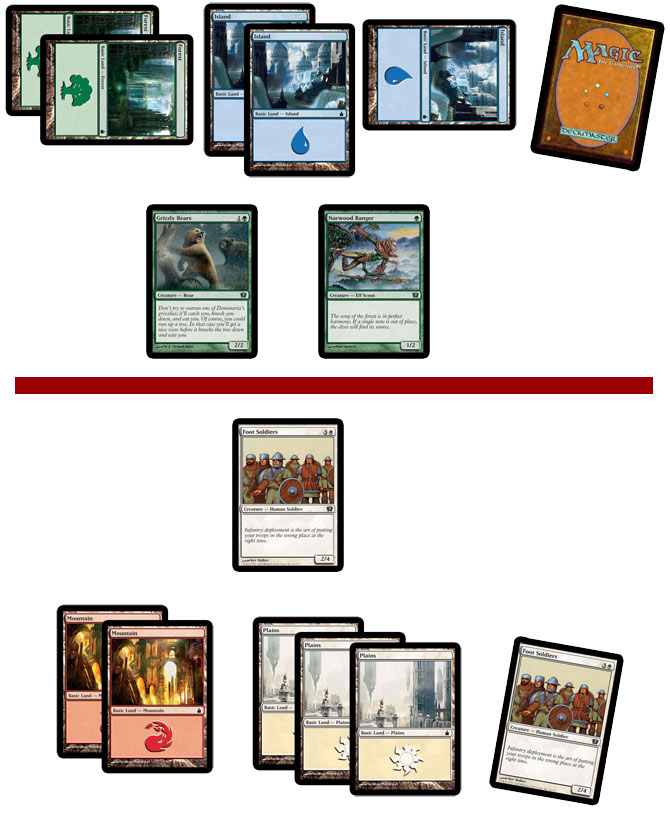 The problem with that is that you are assuming that the primary effect of waiting to cast Foot Soldiers is that you force him to decide whether to block without knowing what is in your hand or whether you can respond. In this case that information is useless to him. There is no card you could have in your hand that would make it correct to block Foot Soldiers. There is no card in their hand that could make it correct to block Foot Soldiers. With the mana he currently has available there's nothing he can cast that would be useful in this combat. At any point in the turn you can attack and your opponent will take two damage.

The danger is that your opponent might have a counterspell in his hand, either Mana Leak or Remove Soul. If he does he will probably counter your Foot Soldiers and if you attack that leaves you without a blocker. You'll be trading two damage for three damage and that's almost certainly a bad deal at this stage of the game. While it is unlikely that you will be punished for attacking first, it is impossible that you will be rewarded. That makes this an easy choice: Cast Foot Soldiers. If he lets you cast it, attack for two. If he counters, pass the turn.

The actual game had different creatures involved, which I changed to their most basic equivalents to avoid unnecessary complications, so that we could laser in on the underlying principles. The player attacked first, and regretted it when he ran into a counter.

In all these situations the key is information, one of the most crucial aspects of the game. Whenever possible you want to get as much information as possible before you make your decisions and deny as much information as you can to your opponent before he makes his decisions. After a while the basic situations become second nature and the key becomes knowing when you need to take the opposite approach. A good first question to ask is: who is making the real choice during combat? If the decision is whether or not to attack in the first place then any extra information you can get from seeing cards or giving your opponent a chance to react to your spells can help you make that decision. If you know you're attacking no matter what, you're better off denying the information to your opponent. Situations like the third scenario are the exception (which is part of why so many players miss them), but the better you understand the basics, the better you'll be able to recognize when to break the rules of thumb.