Ajani: Faces of a Planeswalker

xperience is a sculptor.

The world impinges on us, creates dings and dents in us that mold us into who we are. Life gives our identity shape, and separates our actual path from all the potentials.

The same is true for other planeswalkers, like Ajani. Ajani has gone through some serious life-sculpting lately.

We decided Shards of Alara would be a good time to do a web comic about Ajani, because he's the first planeswalker character to appear on more than one planeswalker card. Flight of the White Cat is the story surrounding the ignition of Ajani's planeswalker spark — in effect, his creation story — and it highlights his connection to Alara. Although we saw him first in the Lorwyn set, Ajani is actually a Nacatl leonin native to Naya, the shard of Alara suffused with red, white, and green mana. As the web comic narrates, after Ajani discovered his brother was killed, Ajani's first planeswalk was to the "adjacent" shard of Jund. On Jund Ajani met the planeswalker Sarkhan Vol, who showed him a new kind of magic (namely, the volcanic, fiery red magic of Jund) that allowed him to open up and externalize his inner rage about his murdered brother. Experience hammered away at Ajani, awakening multiple new character traits in him all at once, creating the ongoing sculpture of his life.

We want to show this kind of progression for many of the planeswalker characters, although not every path will be the same. Some planeswalkers may grow in stature and get more powerful as they learn more and more about different types of magic. Some planeswalkers may shift in color alignment, repudiating some of their past beliefs and adopting new ones in response to dramatic life changes. Others will continue on undaunted, hewing closely to their previous trajectory, forging their own path through life in the absence of experiences sensational enough to warp their perceptions or powers. There are as many possible paths as there are planeswalkers.

So which is which? Between Ajani Vengeant and Ajani Goldmane, which happens first?

Ajani Vengeant, despite its card releasing later, actually represents Ajani as a younger cat-man, just after his spark ignites. He's full of rage and righteous vengeance, letting nothing stand in his way as he discovers who was behind his brother's death (which is still a mystery). Ajani Goldmane actually represents Ajani later in life, a bit calmer and wiser, his magic use perhaps less ostentatious but more devoted toward the development of the souls of others. You can see in Flight of the White Cat how Ajani's early magic, before he was a planeswalker, anticipates this later stage in his life — his healing magic, for example, only helps others, not himself. But it takes many years for life to mold him into that shape — first he has to crash through the emotions of his brother's death.

Check out the art of the two Ajani Vengeant cards. This is the one you saw at prerelease and release events for Shards of Alara: 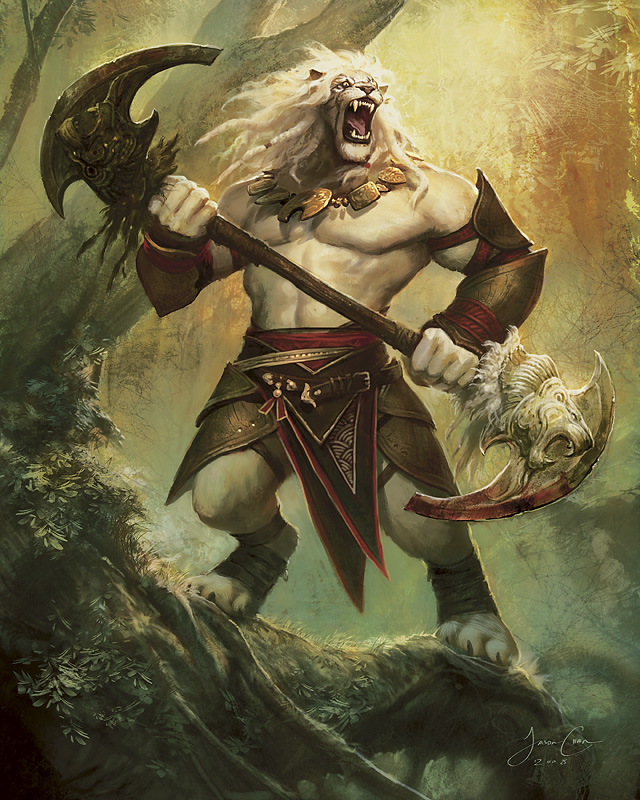 And here's the version you'll find in Shards of Alara booster packs: 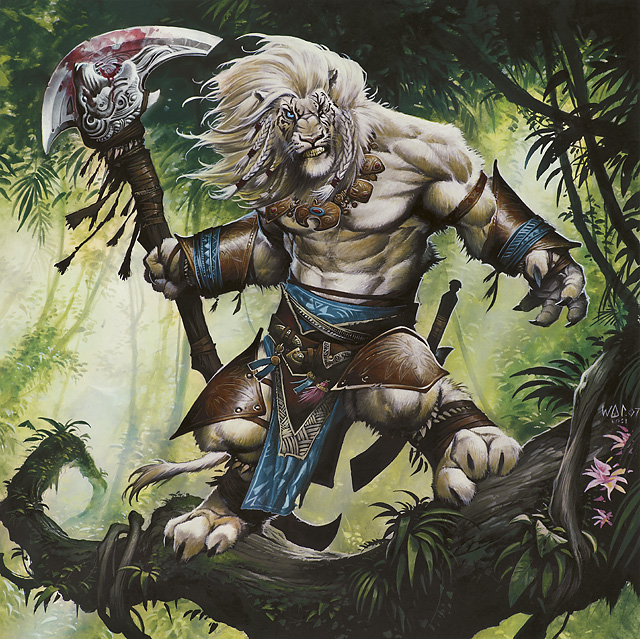 Both of them show Ajani as a young Nacatl leonin, gripped by a seething fury over the death of his brother, Jazal. He looks youthful here, a fierce cat of the jungle, his armor simple and primitive. Compare those to the Ajani Goldmane card art. 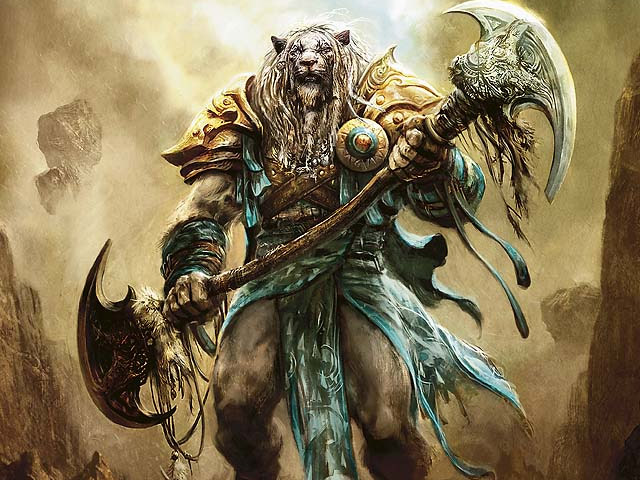 The two cards are meant to represent Ajani in two different stages of his life, and can both be played in the same deck. Yet they're the same person, which the rules about planeswalkers take into account. Ajani Vengeant and Ajani Goldmane both have the same subtype "Ajani," which means if they're ever in play at the same time, they all go away.

If two or more planeswalkers that share a subtype are in play, they're all put into their owners' graveyards as a state-based effect.

It's sort of like the "Legend rule," except that it works based on the subtype, not the card's name. Kamahl, Pit Fighter and Kamahl, Fist of Krosa can both be out on the field of battle at the same time, which is pretty strange flavor-wise since they're supposed to be the same person. Because we knew back during Lorwyn development that we'd want to revisit planeswalker characters in the future, the designers closed this anti-Vorthos loophole.

As the planeswalker characters grow and change, you'll see other planeswalker cards show up in future sets that bear the same subtype as ones you know. Who's next? I have to leave that as a mystery for now, but I can promise that you'll see people come and go as their stories demand.

Note that you'll hear more about Jace Beleren and other planeswalkers in the Agents of Artifice novel by Ari Marmell, releasing in February just in time for Conflux. Jace is off doing his own thing, and his story is largely unrelated to the storyline happening on Alara's shards right now. But that doesn't mean you'll never see a new card for him, or the rest of that first Lorwyn crew, for that matter.

Dear Doug Beyer,
Regarding your article "The Warrior Esthetic":

Remember writing this article? I had to search it up in the archives because it dealt with a very interesting topic: the shape of the plane of Lorwyn. You said in a previous article that the Creative team hadn't given much thought to it because it wasn't important to the story. I'm curious — what work has the Alara team done in regards to the topography of the Shards?

I didn't care much about the shape of Lorwyn because it didn't matter to the worldbuilding, but Alara is another matter altogether. The way the different shards figuratively fit together is the biggest theme of the set—but what about how they *literally* fit? The Planeswalker's Guide more or less states that the individual shards were once physically contiguous before the Sundering. If that's the case, what is the state of their borders now? What will happen at the inevitable Conflux?

You can get away without explaining the shapes of most of the shards, but not all of them. I imagine that the inhabitants of Jund and Naya don't care much about the boundaries of their planes, and the Grixis natives are too concerned with just surviving to go exploring. The people of Bant might care, or maybe they're just interested in ordering the main continent. But Esper! Certainly the bluest of the blue mages would want to know every detail of the shape of their world. When they make expeditions across the ocean, what do they find?

My inner Vorthos cringes at the silence with which this topic has been treated. My hope is that you left it out of the Planeswalker's Guide so that it could be the subject of an extra-detailed article in the future. I'm one of that Vorthosian subset that doesn't care about plot at all but really loves style guide snippets. I want to appreciate up close all the effort that goes into worldbuilding without distorting it through the point of view of any characters. And I know I'm not alone — please don't leave us hanging!

What's a shard shaped like? Part of the reason we've never gotten super-specific on this is because every answer has problems. But we have two main thought-models about it, which I'm happy to share and hear feedback about.

Think of a peeled orange. It's roughly spherical, but it's got sections. The sections are stuck together, so it's all one continuous object. Pretend there are five sections (rather than… eight? I've just realized I have no idea whether all oranges always have the same number of sections, and/or whether that number is eight). Anyway, that's Alara before it shattered into shards. Cover its outsides with terrain, oceans, whatever. All the people live on the surface of the orange, unaware of the Sundering that's about to happen.

Now pull the delicious sections apart into five pieces. The pieces are wedge-shaped, with rounded outsides. Those are your five shards. Each piece used to touch two other adjacent shards, but now floats free all by itself, and the breaking process has caused each wedge to be cut off from two colors of mana that were once available in the whole orange. Now the people live on strips of terrain on the outside of the orange wedge, and the rest is Alara's pulpy middle. Thousands of years later, the once generally-homogeneous orange wedges have changed according to the mana available to them, and are unrecognizable from their former orange selves.

I like this model. It's physical and understandable. It has problems, though, in that it gives rise to sub-planes that have actual cliff-like boundaries. The worlds have big, jagged edges that would give flat-worlders nightmares—or else it would allow people to move all around the wedge, which is just weird, and brings up questions about what Alara's guts were made of, and all sorts of badness. We try not to think of planes as planets—it's a multiverse of magic, not geophysics.

The other model hinges on a liberal use of the word refraction. Think of a spherical Alara again, and imagine yourself looking down at it from above. Think of it as having one huge, Pangaea-like continent where most of the people live.

If you're like me, now you're looking at two Alaras, as your eye-crossing overcomes your stereoscopic vision and separates the input from your two eyes into separate images. You've just done a small version of the Sundering — you've created two sub-planes from Alara, each with its own "copies" of the Pangaea-like continent and all the other features of the original world.

Now imagine you have five eyes, and bam, you’ve got five shards! Not to mention a wicked headache.

On this model, it’s not a physical separation of a spherical world, but a more abstract division. The resulting worlds are physically whole, but filtered when it comes to their mana. Think of light splitting through a complex prism, such that it carved the white light into five sub-rainbows, each with only 3/5ths of the complete light going into the prism.

This model has a lot of advantages. Each world is a regular plane in itself, with no worries about what the core is made of, and all that jazz. The evolution of the shards thereafter is incredibly interesting, as they all start from an almost identical starting point, and change only based on the different mana flowing on them. You would see a kind of Lorwyn-and-Shadowmoor-like mapping of locations to one another, called different names on different shards but originating from the same Alaran landmark.

The Refraction Model is closer to what we believe here on the creative team, but it’s generally a lot harder to explain than the Orange Wedge Model. There are other problems with the Refraction Model that come up later, as well, but let’s wait to explore those. Thanks for your letter, Wes!