The Art of New Phyrexia's Factions

hyrexia has a home plane once more, and their triumph played out in true Phyrexian style: it infected a world, it grew and evolved within its host, and then it metastasized into victory. All the boxes are checked, the ballpoint ichor-etchers are clicked, and the flesh-and-metal clipboards are put away. Operation Turn Mirrodin into New Phyrexia is now concluded. There's cake in the conference room. 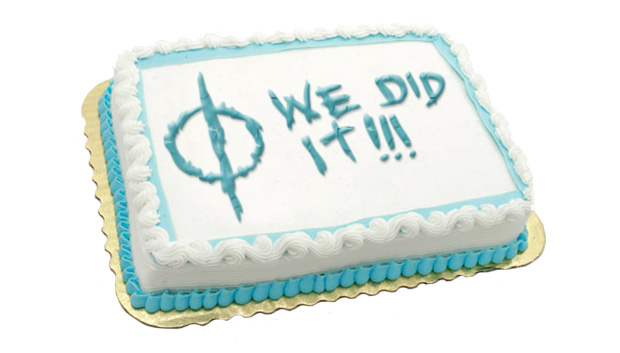 But on our end, it wasn't easy. New Phyrexia represented a peculiar artistic challenge. It's the most Phyrexia-heavy set in Magic—not just in terms of Horror subtype count and poison-counter density, but also in terms of the sheer quantity of Phyrexian imagery. The task before us was to come up with almost an entire setful of Phyrexian illustrations that all the New Phyrexia cards would demand. On the face of it, we on the creative team had all the right tools to do the job—we had a stack of style guides, almost two decades of reference illustrations, and a talented, unsqueamish squad of artists. Still, I wasn't sure it would come together.

Phyrexia has two problems. First, it's grisly. A lot of people are attracted to fantasy art, and to Magic art in particular, because it idealizes reality. We show aesthetically-pleasing people doing awesome things—a lovely escape from the doldrums of real life. Phyrexia, on the other hand, is intentionally off-putting. It preys on our delicate sensibilities. It takes hold of those same desires for beauty and belief that attract us to fantasy and twists the ever-loving bleep out of them. 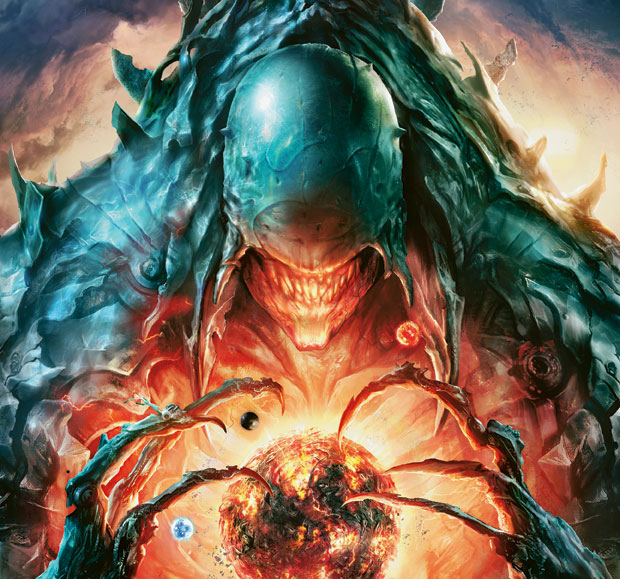 Second, it's consistent. It has a particular look-and-feel. Even though Phyrexians have had many individual creature designs in the past, they all have elements in common. Phyrexians, generally speaking, look like Phyrexians. Why is this a problem? Well, it wasn't, until we set out to do a whole set full of them. A whole set full of Phyrexians after already doing two sets that featured them, too. That could be bad. Too much consistency could lead to visual monotony. Sometimes we talk about "answers" on the Creative Team—as in, when the twentieth or fiftieth or one hundred seventy-fifth card handed over from development asks, "What do I look like?"—we have to have an answer ready. With a look-and-feel that is too consistent, you might run out of answers.

This problem of consistency was solvable. We knew Phyrexia would be branching into five colors this time around, which gave us the opportunity to design a unique look for each color-aligned faction. We could break up that monolithic uniformity and give Phyrexia some welcome variety, and give ourselves concepting "answers" in the process.

The other problem, with the off-putting-ness—well, there wasn't much of a solution for that. We knew there would be elements of Mirrodin still clinging to the edge of survival in New Phyrexia, but we knew that would probably be cold comfort for those seeking a strong heroic element in this set and a "Pure" ending to this year's story. We decided we just had to commit. We would do more Phyrexia than had ever been done before, do total justice to its essence, and just see how it went.

In terms of world-building, the result was what you saw in the Planeswalker's Guide to New Phyrexia.

We were immediately on the hunt for a schtick or a trademark look for each of the five Phyrexian factions. We were considering the look of porcelain, with its cold, polished-bone smoothness and its creepy-doll associations—perfect for an unnerving faction full of twisted religious figures. But it was an offhand comment from a fellow Wizards of the Coast employee outside the team (Mari Kolkowsky, an art director for Dungeons & Dragons) that led to the final look of white-aligned Phyrexia. She mentioned the look of old farm sinks, and how they often have a porcelain covering, but cracked, so that the rusted iron underneath shows through. That was the key that nailed it for us. Concept artist Richard Whitters was off and running, sketching horrors with their noble porcelain covering cracked in places. Occasionally these Phyrexians have black iron showing through, just like old sinks—but sometimes it's raw, red-oozing sinew. Creepshow. 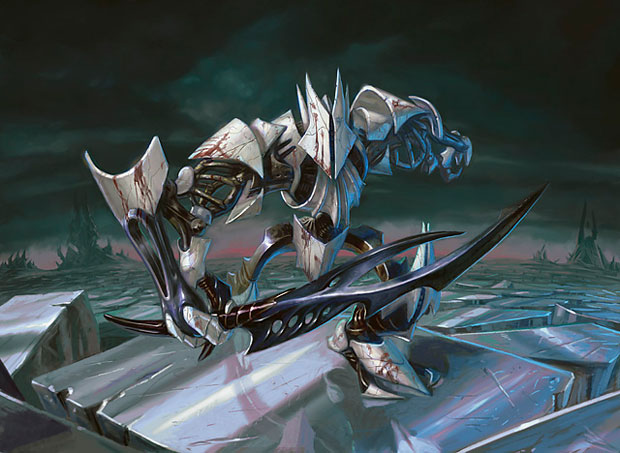 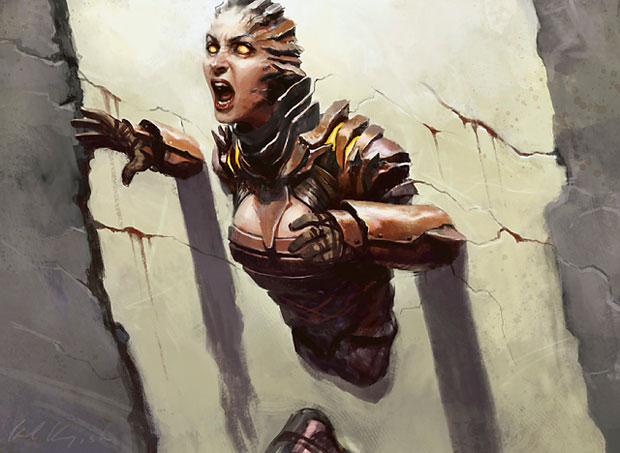 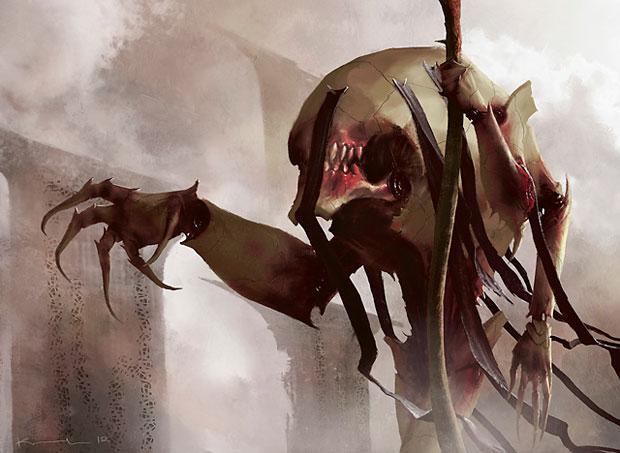 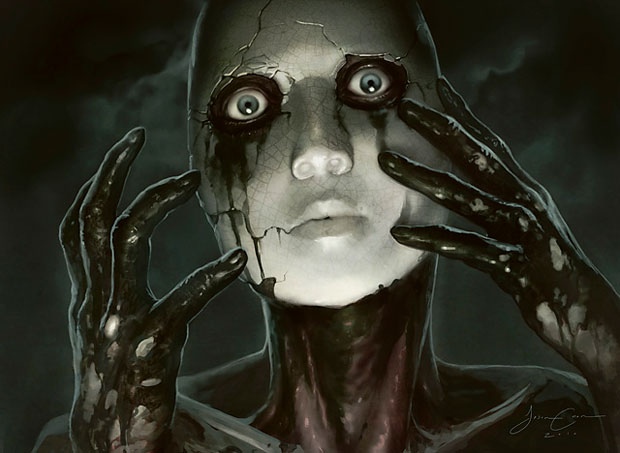 For blue-aligned Phyrexia, we wanted a look consistent with a faction full of analytical, clinical scientists and dissectors. These are the twisted surgeons who want to find perfection with a scalpel. We hit on silvery-bluish chrome as the look for this faction. The Quicksilver Sea already had this association with the color blue in Mirrodin, and we let it carry through for the Phyrexians as well, as it captured all the cold, fearful aspects of visiting the dentist or going under the surgeon's knife. The shiny, polished feel would work nicely with the sinister-looking syringes, scopes, and other pseudo-medical devices, giving the faction the bedside manner of a serial killer. 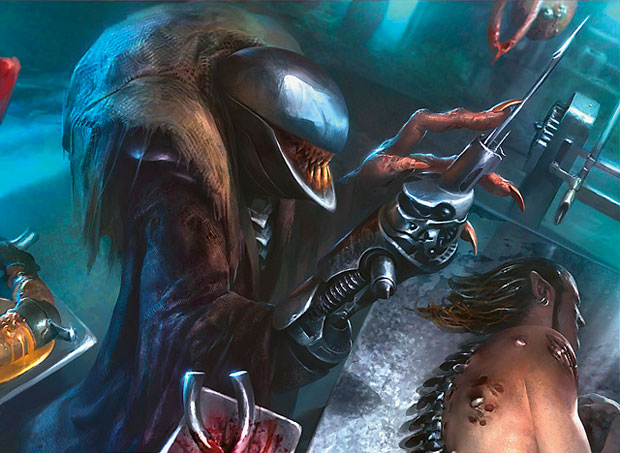 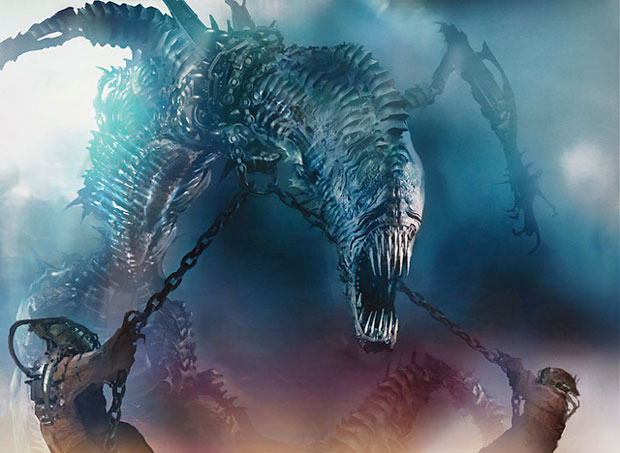 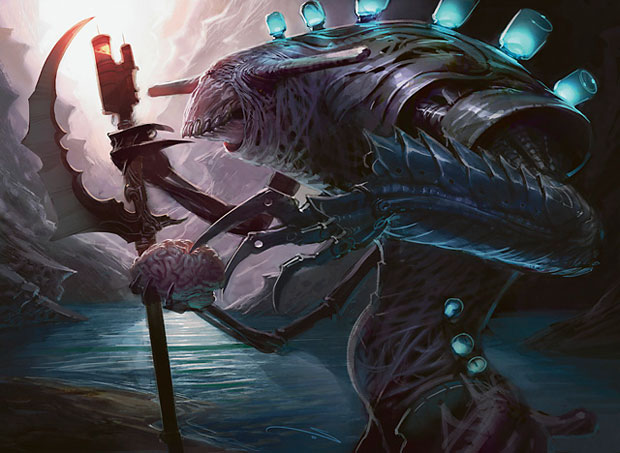 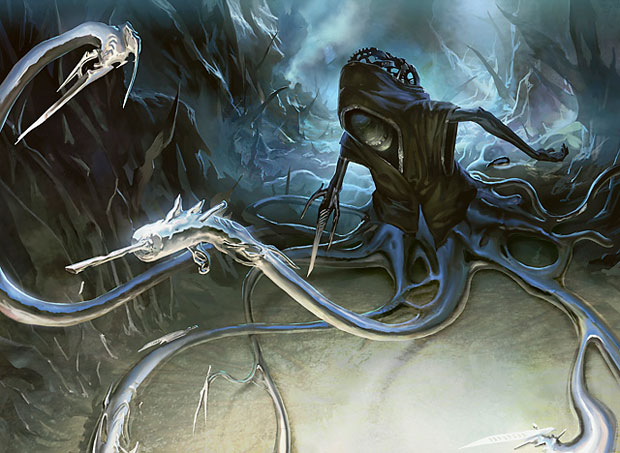 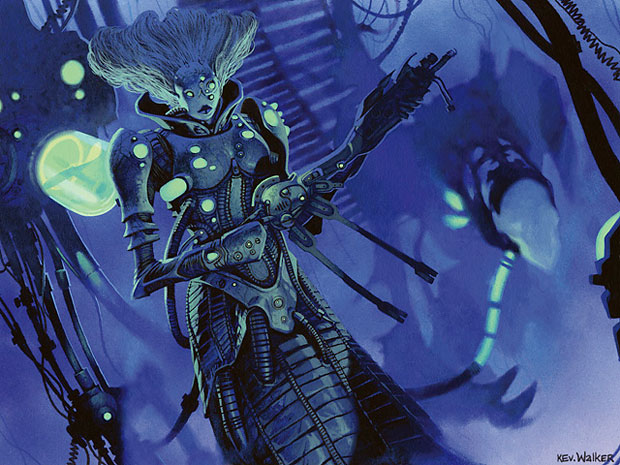 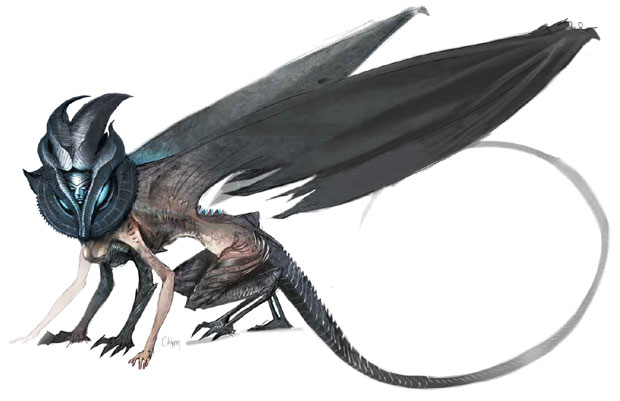 You know the smell of a mechanic's garage? The tang of steel plus the sickly-noxious smell of used oil? The corroded scent of the undercarriage of old cars and the permalayer of ancient grime? That's the smell of black-aligned Phyrexia. Visually, it's charcoal-gray metal (not darksteel, mind you) plus the ever-present black oil. It's corroded jaggy flanges in the shapes of ribcages and eye sockets. It's the shapes of death sculpted from the materials of toxic junk heaps. But it's not junk. It's fearsome and efficient. Black-aligned Phyrexia has the most history behind it—it's all about crashing worlds, corrupting the populace, and seizing power. So even with its corroded metal and oil-stained necrotic tissue, it has a sleekness to it. It's an antagonist that gets it done. It's just super-creepy while it does it. 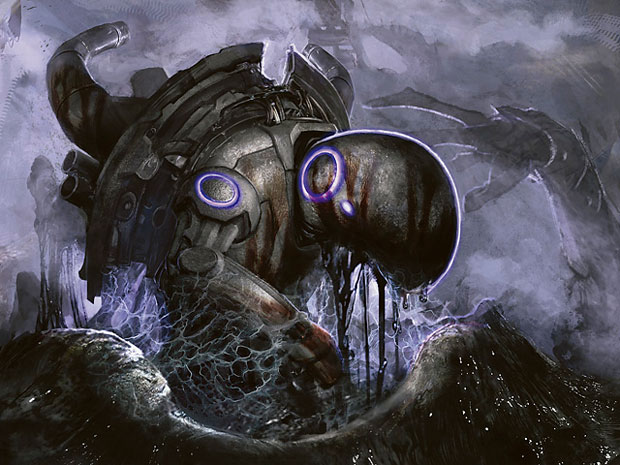 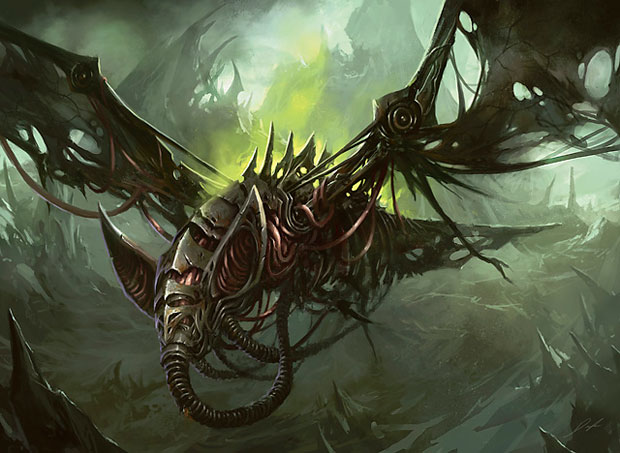 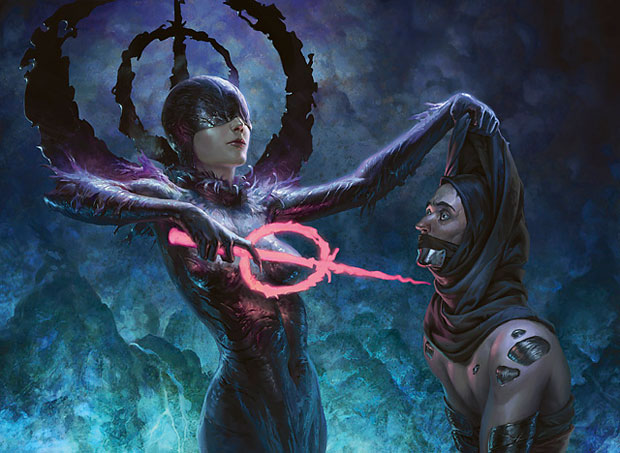 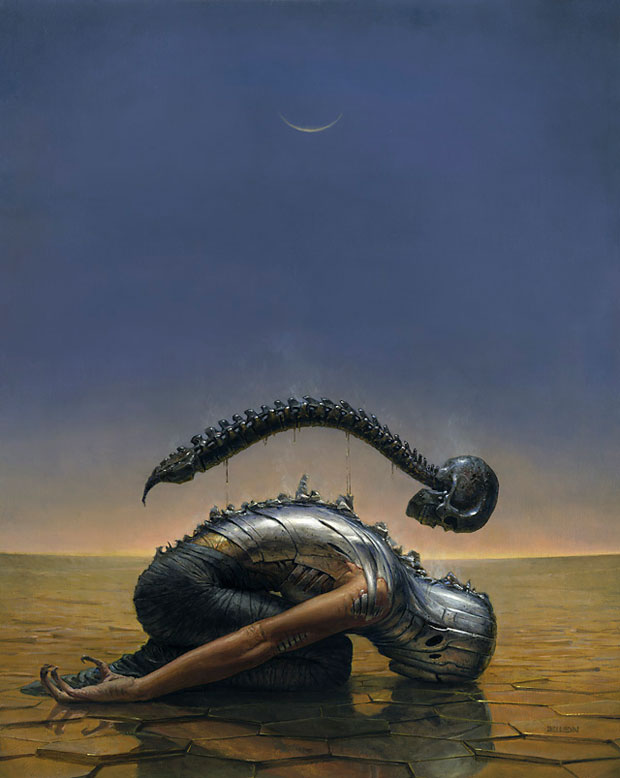 Red-aligned Phyrexia has the closest relationship to the Furnace Layer, Phyrexia's hellish industrial zone where the infrastructure of the Phyrexian system is maintained. So we wanted red-aligned Phyrexians to look like laborers of a sort—menial drudges whose design suits their working purpose. We loved the concept art of a Phyrexianized goblin that artist Chippy came up with that showed the creature's anatomy hollowed out, replaced by metal struts, and filled with a glowing-hot inner core. That led to a lot of other morphologies with a similar theme, and red Phyrexia carries this "metal ribcage and inner glow" look across much of its creatures. If there's a sense in the Quiet Furnace of menial underlings stoking the fires of Phyrexian civilization, that's partly what we were going for. If there's a sense of occasionally freaky, uncaring, rage-driven monsters, we were going for some of that too. 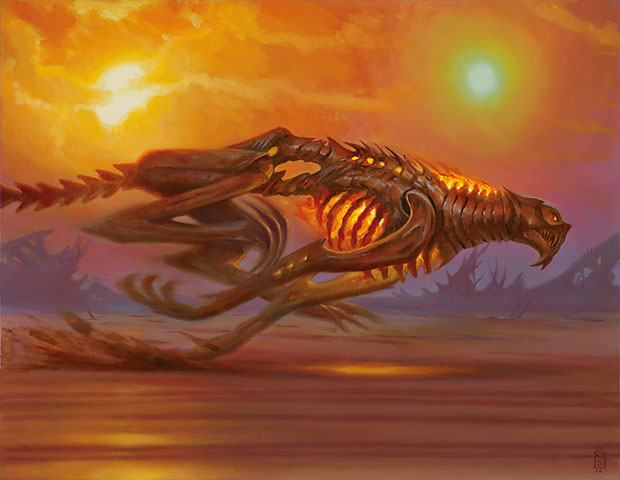 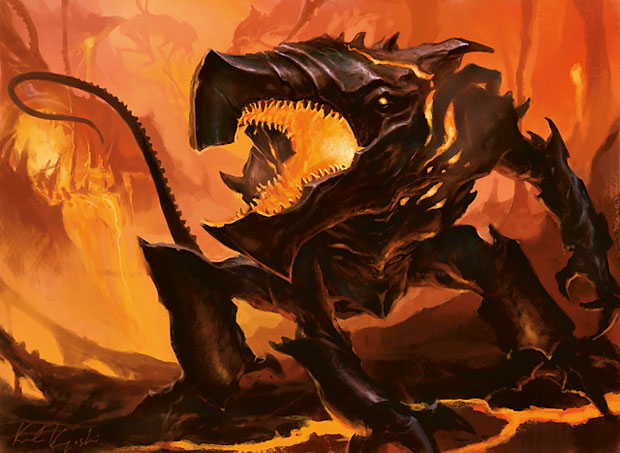 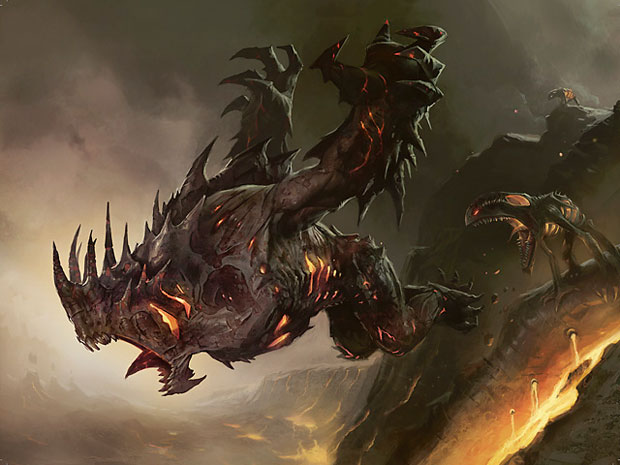 Chancellor of the Forge | Illustration by Chippy 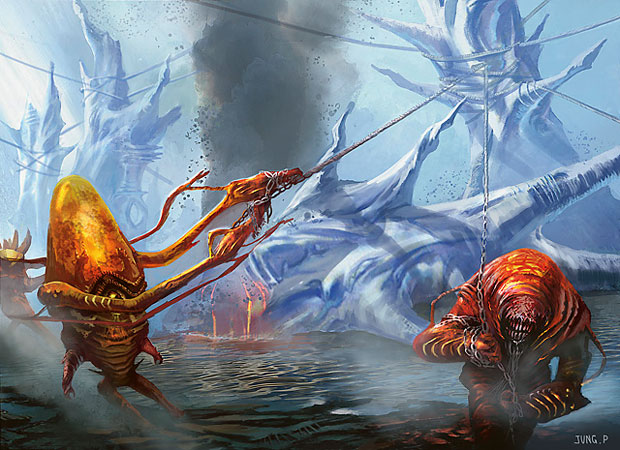 The look of green-aligned Phyrexia was a bit of a puzzle. How should we make green's natural ferocity come across while staying consistent with the mission of machine-obsessed Phyrexia? The materials were pretty clear—Mirrodin's Tangle was already a study in metal-infused beasts roaming a "jungle" of verdigris-stained copper, so we brought over those coppery-green plates into Phyrexia as well. But the creature designs were tougher. How would we make coppery-green Phyrexian beasts distinct enough from several sets' worth of coppery-green Mirran beasts?

In the end it was a combination of skin corrosion, traditional Phyrexian eyelessness, and a healthy application of goo that set these feral Phyrexians apart. Green-aligned Phyrexians often have nature-inspired anatomy—they're snakes or boars or huge pachydermal beasts—but they get that Phyrexian twist by prioritizing grungy, fungal, scalelike metal over the ability to see. They have patches where their scales have flaked away, exposing the coiling metal endoskeleton underneath. They emerge from dripping vats of ooze in a mockery of natural life cycles. 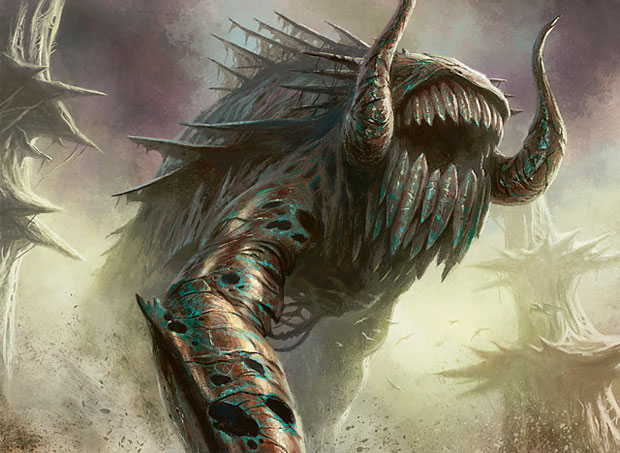 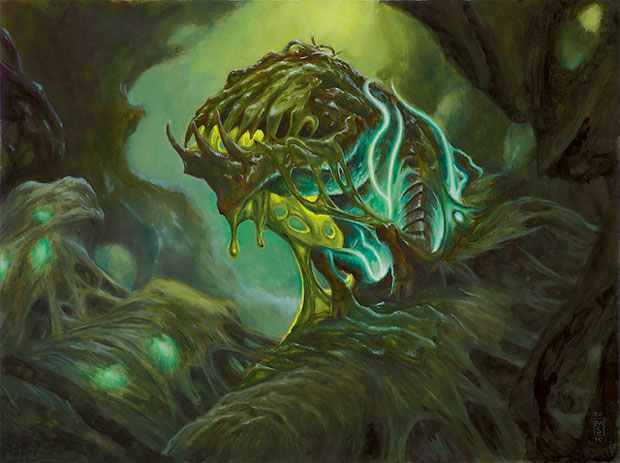 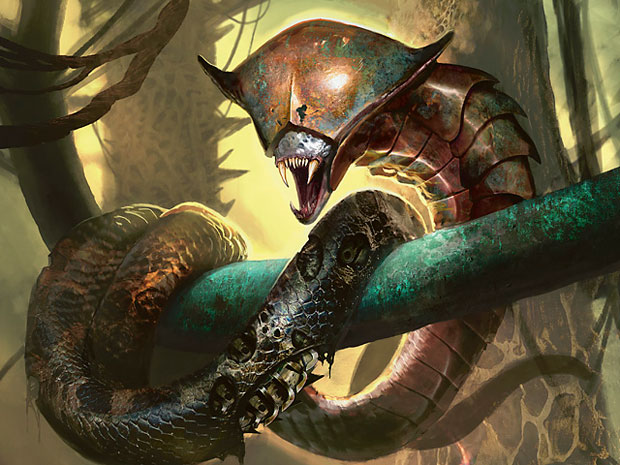 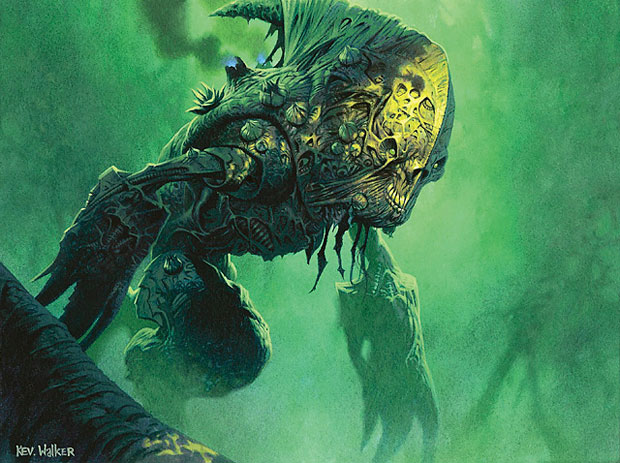 The Look Comes Together

Since New Phyrexia has released, I've heard from a lot of players on how the set turned out. Happily, many people dig the raw, hard-edged villainy of Phyrexia and appreciate the storyline gravitas that Phyrexia represents. I know there are Mirran diehards who were left in the lurch by the way the war turned out, but even some Mirran fans have told me they've enjoyed the look of the set nevertheless. We put a lot of work into turning Phyrexia into a civilization that could support a much broader span of cards and illustrations than it ever had before. Thanks to the pains of our talented concept artists, art director, and illustrators, I'm calling it a success worthy of Phyrexia.

I have been wondering over the past few weeks: what's the fundamental difference between Phyrexia and Grixis that makes it seem like it doesn't care all that much about vis ?

Denizens of Grixis looked really concerned with their world running out of vital energy, and since Phyrexia is kind of about using dead creatures to build biomechanical monstrosities that are not all that alive when you come to think about it.

I can see your answer coming: "Oh well, New Phyrexia has white and green mana, so it's pointless to compare it with Grixis that had only access to blue, black and red mana." It could be a pretty satisfying answer but the original Phyrexia, the one Yawgmoth made, only had access to black mana, and although it was bent on invading other worlds, it looked more like a deliberate act of invasion rather than a desperate move to find more vital energy to keep the machine running.

So, is there a major difference, or is it a shortcoming of the Creative Team? (with which I'd be fine, honesty is a great virtue!)

Very interesting question, MitlaMit—thanks for your letter! The story of Grixis's quest for life energy, or vis, is similar but different from Phyrexia's motivation for invading worlds. Grixis is a shard of the larger plane of Alara that once had access to all five colors of mana. When Alara broke into its five shards, the hunger for those life-oriented colors of mana, white and green, was strongly felt. On the other hand, I don't think Phyrexia ever felt like it lost anything. It was always a machine civilization run on artifacts and the power of black mana, and it was doing just fine—not winding down and cannibalizing itself in the way Grixis turned out. You're right, Phyrexia hasn't invaded in order to refuel or drink from the life energy of other planes; it invades because it really wants to control, convert, and corrupt other worlds. Spreading and proliferating throughout the Multiverse is built right into its core ethos. 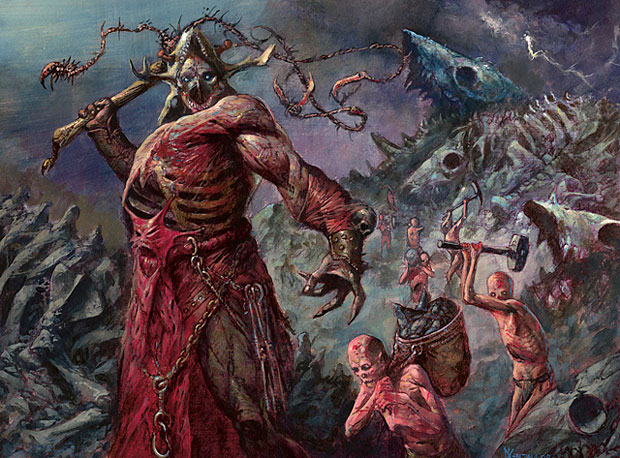 To me the concept of vis as a needed commodity is localized to the plight of Grixis; we didn't think of it as necessarily a universal requirement across the Multiverse. The life on Grixis originally had access to those colors of mana and lost them, which created a need that it suddenly couldn't fulfill—it wasn't intended as a claim that all worlds without white and green will starve for vis like Grixis did. But it's an interesting thought experiment. Maybe Phyrexia has been "starved" for the virtues of four colors all this time, until its victory here on New Phyrexia. Certainly I think New Phyrexia's red faction, the Quiet Furnace, shows how Phyrexia has attained an element of compassion that it has always lacked before. Thanks for your question!