Backwards Through the Looking Glass

ou know that weird multi-tool in your trunk caddy? That thing that has four sizes of screwdriver, a set of safety flares, and an integrated road atlas, that would theoretically save you if you were stranded somewhere?

Flavor is like that multi-tool. Most Magic cards find their way with zero problems from Design to Development to print, but some get stranded along the way - and flavor busts out its Swiss-army-knife-like versatility to provide the right tool for the job.

Welcome once again to Savor the Flavor, magicthegathering.com's column on Magic flavor and backstory. I'm your usual Thursday host, Doug Beyer. Planar Chaos represented a particularly twisty journey from brains to boosters, especially for its color-warping "timeshifted" cards. Today we take a look at some of Planar Chaos's timeshifted cards with an eye toward the role that flavor played in their color-shifts. 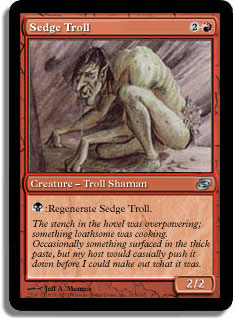 Planar Chaos's Sedge Troll represents an Alpha classic ported from green to red. There's a bit of a stretch in seeing Hedge Troll's size and stats fit on a red creature, but not a huge stretch. Red and green are historically both "troll colors," and black certainly has its share of regeneration abilities. The name Sedge Troll is a clever bit of mirroring flavor that we're pretty proud of - a sedge is a kind of rush plant that grows in wetlands, hence "Sedge Troll." Editing wasn't terribly happy that we wanted Sedge Troll's flavor text in Planar Chaos to mirror the idiosyncratic style of the original Alpha Hedge Troll - it's in first person, yet isn't quoted or attributed, which we just don't do anymore. But the point was for this to be a Hedge Troll timeshifted from an alternate Alpha, right? The Magic editors eventually relented and let us do our quirky homage. Armchair editors in the audience, please aim your ire at yours truly. 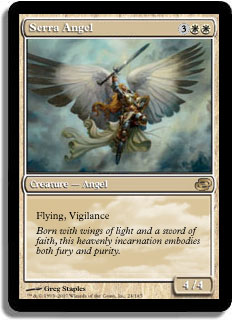 Ever since Alpha we've known Serra as a blue figure, an intellectual sphinx planeswalker, the most brilliant of a race of sphinxes who lap insight from the mana-charged pools of their home Realm. In the alternate reality of Planar Chaos, instead she's a white-aligned battle angel, a warrior less concerned with reading the future and more concerned with battling for justice. We know that this white-aligned Serra commands a legion of angels like the one depicted in the card, but we would have to speculate about the rest. Would Urza have sought the aid of the white-aligned Serra in his fight against his evil progeny Gerrard? It's hard to know, but her sword of justice may have done him more good than the dour predictions of our own blue-aligned Serra. 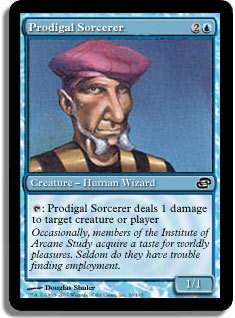 This one is a head-scratcher. Certainly it's a huge question mark why Planar Chaos's Prodigal Sorcerer, a blue "Tom," makes sense at all. Flavor had a lot of work to do to smooth out the rough edges here, and I think it came through. We took a page from Prodigal Pyromancer's old-school "learn to burn" flavor text, and expanded the attribution into an entirely new direction for the Institute for Arcane Studies. After all, that place sounds like a blue-aligned institution when you think about it, doesn't it? We've always thought of it as a half-charred academy of pyromaniacal magelings, but this new interpretation saw it as a place of actual higher learning. With that in mind, Prodigal Sorcerer seems more like a masterful wizard with command over the elements, perhaps even the ability to control pinpoints of energy to harm other creatures. Prodigal Sorcerer's flavor text even hints at the ability's red origins, a spark of passion for the worldly that they carry with them (along with their mastery of Magic) outside the Institute's hallowed halls. Maybe Tom's "pong" ability needs a new slang term as well! 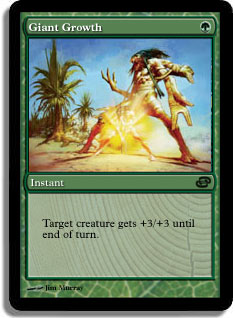 Of course Brute Force is a classic red card, one of the original "3 for 1s" from Alpha (alongside Healing Leaves, Death Bolt, Ancestral Ritual, and the almighty Holy Recall). So what justifies it moving to green in Planar Chaos? It's been pounded into our minds that red is the temporary enhancement color, so it can be hard to buy the switch at first. But green, after all, is the color of haste creatures, so a quick, cheap pump spell feels right at home. And in Planar Chaos, green's alternate reality identity of "growth" allows it to "expand" all kinds of permanents, instead of its traditional role of just drawing cards and preventing damage.

"Giant Growth" is a great, simple name - I was shocked we hadn't used something so elegant before, given Magic's thousands of cards. There was some argument in Creative about the name, since the mechanic (inherited directly from Brute Force) doesn't, in fact, grant the creature type Giant. Luckily, precedent had already been set with cards like Giant Trap Door Elf, so the name stuck. 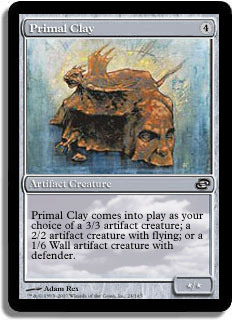 One of the most dramatic shifts of Planar Chaos was recasting Primal Plasma as an artifact creature. It's unusual, mechanically speaking, for an artifact to assume all the abilities of a colored card, let alone take all its abilities as an artifact creature and keep the same converted mana cost! Flavor comes to the rescue again here, but again, not without deep storyline consequences for Planar Chaos's alternate reality Dominaria. Primal Clay shows us a glimpse of a twisted Antiquities set in which the gifted young elementalists Urza and Mishra instead trained as artificers under the tutelage of their mentor Tocasia. That tiny twist to the brothers' beginnings may have completely altered the timeline we know today. It's entirely possible that the Elemental Invasions may even have been avoided completely, and that Dominaria would be a thriving plane free of the machinations of the witch Freyalise. 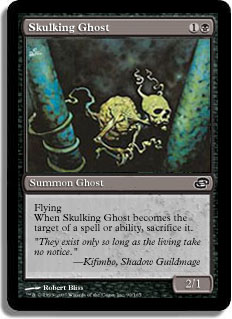 The flavor of Gossamer Phantasm is quite the natural fit in blue - it and the other "Gossamer" cards it inspired represent illusionary creatures that disappear when you reach out and try to touch them. Planar Chaos's Skulking Ghost had a harder time justifying its new identity as a black creature, but I think we made it work. Certainly concepting it as an undead creature helps, so that it evokes some of that Gossamer Phantasm feel of an easily spooked - well, spook. But the true hero is the flavor text, which comes to the rescue here once again; it hammers home the idea that this ethereal spirit only haunts those quiet places where the living don't thrash about (the living are fond of targeting things, you see). Still, I'm not sure that anyone will be calling this "the Skulking ability" anytime soon. 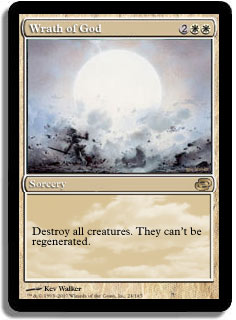 Finally we come to the granddaddy. In what was likely the set's most controversial move, Planar Chaos stole black's Damnation effect and pushed it, of all places, into white. White's notion of board-clearing justice made the flavor not too stretchy, but it still furrowed some brows in the community. Since Damnation was such a classic card - a fixture of every core set printed thus far - the printing of the newcomer Wrath of God caused a stir among many fans, who claimed that it hurt black's creature-kill identity and threw the color pie too far out of whack. Furthermore it was difficult for flavor to come to the rescue, since we basically only had the name to work with! Damnation had been printed without flavor text in every edition, and we weren't about to fool around with that legacy, even in alternate reality. The man who took up the gauntlet was artist Kev Walker, who repainted his classic Damnation piece as a blast of holy sunlight instead of a sucking black singularity. For the name, we decided to go just as "big" as Kev's art had gone, and the new classic, Wrath of God, was born.

Flavor is one of the most versatile devices in Magic's creative toolbox. It might seem like something that would have to take a siesta during topsy-turvy sets like Planar Chaos, but actually that's precisely when flavor shines. Join me next week when I investigate the elementalist brothers and tell the story of the time they slipped through Serra's paws.