The ones from Mirrodin? Coppery tang. Be sure to get them fresh—any signs of Phyrexian corruption and they're not worth eating.

Rabiah? Cook them over dry heat. Kamigawa? Try 'em raw. Lorwyn, where there are no native humans? Less cannibalistic aftertaste!

But if you're truly thirsty for blood, you have to go with the experts in the preparation of planeswalker flesh. Today on The Bloodthirsty Chef: how to get the most out of your appetite for the lifeblood of plane-hopping mages!

Just like your mama taught you, bloodthirst comes from the natural instinct to survive. When blood spills, the senses awaken. Follicles contract. Pupils dilate. We inherit these instincts from predator species of old. The crocodile snaps from energy-conserving lassitude into lightning-quick action when wounded prey nears the water. The bat, sonar-guided hunter of the night, homes in on the vibrations of individual heartbeats from a mage's jugular. Primal nerve clusters kindle at the whiff of adrenaline and horror in the blood trail of the damaged victim. 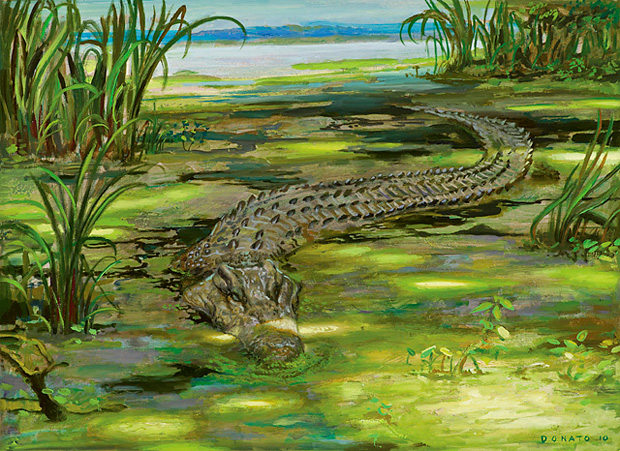 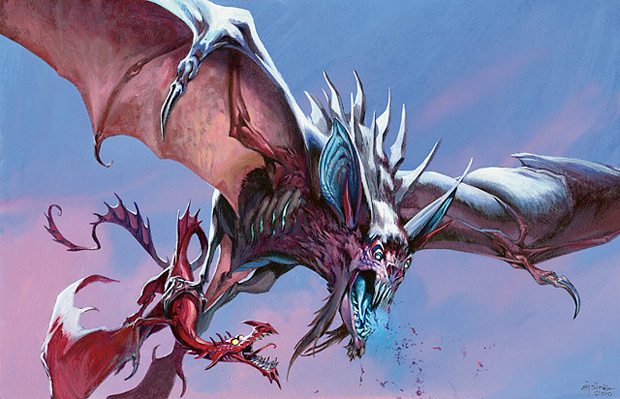 Even at the largest scale, there is no less appreciation for the fine flavors of a good planeswalker. Forest-dwellers make routine animal sacrifices to the insatiable wurm, but some theorize that the largest wurms are only pacified by the taste of spark in their meal. And it takes only a single drop of planeswalker blood anywhere in the plane to appetize the hellkite, every plane's most fearsome draconic adversary, which will burst through miles of igneous crust ready for the main course. 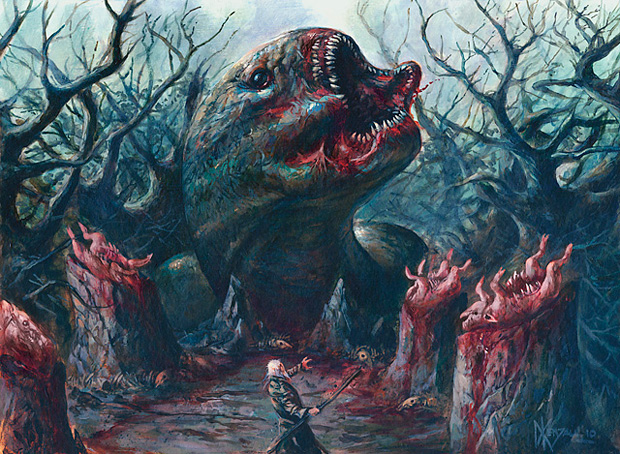 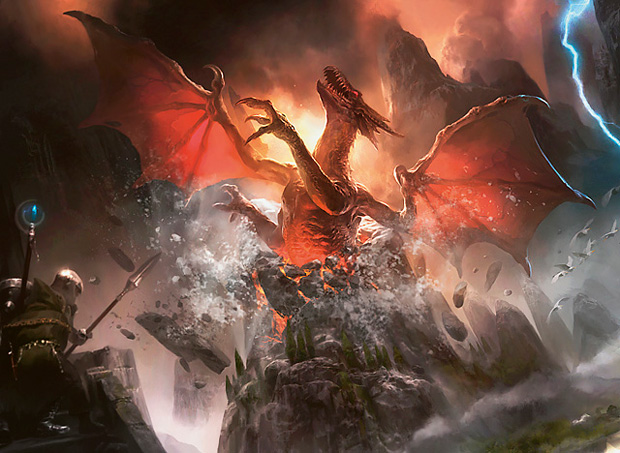 But it's not just primal creatures that are at their best when blood is in the water.

Sentience does not eliminate bloodthirst; in fact, it makes it all the more consuming. A bat or wurm attack a blood source out of instinct. A sentient being lets the hunger consume her, allows the feeling to intermingle with her thoughts, grants herself permission to give in to the urge for slaughter—putting the ancient hunger to work. Battle-rage is nothing but a well-cultivated reaction to the dinner bell. And those whose big brains drive them to war are culinary aesthetes, looking for the perfect mélange of sweet conflict and savory triumph. 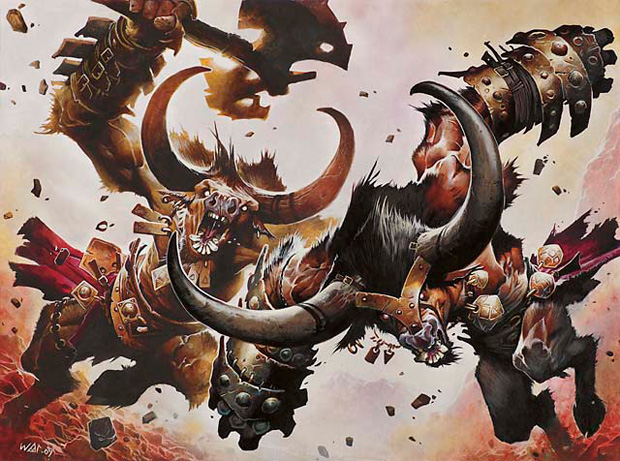 The minotaurs are war machines on hooves. Their race has perfected the art of battle-frenzy, letting the howl of pain sound the call to war. They arrive to the battlefield outfitted and ready, expecting nothing less than a battle-wide stampede over the enemy. 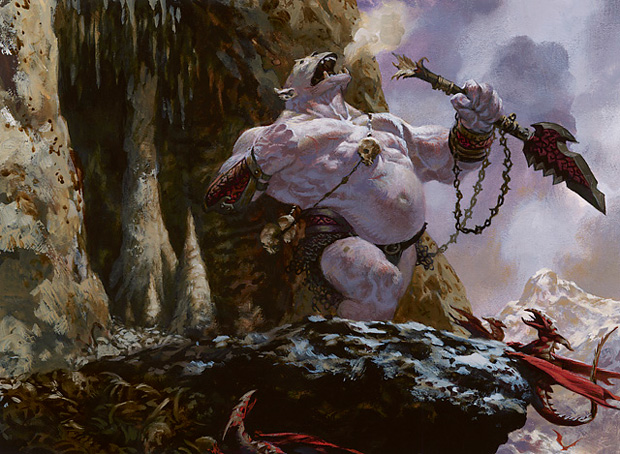 Ogres have never been the greatest of abstract thinkers, but they understand the awkward stumble of the maimed wildebeest or the teeth-gritted wheeze of the wounded planeswalker. They roar forth from their caves with the eagerness of the food critic at a four-star restaurant opening. The Blood Ogre tribes in particular dine in chain reactions, the carcass left over from one feast kindling a neighboring ogre's hunger for the next. 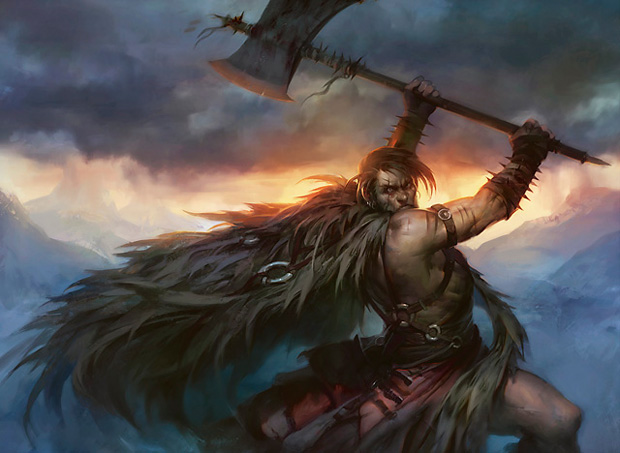 The king of the bloodthirsty humanoid category must be the berserker, for whom blood, war, madness, and "today's agenda" are all mutually synonymous. If berserkers could blog, every post would be tagged "Berserking," "Blood," and "Freaking Out After Somebody Got an Axe in the Face." Berserkers are so eager to dine on the madness of war that it's tough to actually get any blood spilled before they show up for battle.

But if the berserker is the king of bloodthirsty, then there's one more category, one more particular type of creature that must be the High Blood-Emperor of Bloodthirstia.

If any being is the Multiverse's grandmaster of culinary blood-appreciation, it's the vampire. No other type of creature is so well-suited to detect, stalk, procure, devour, and take sustenance from blood— like obsessed oenophiles, they drink nothing else and care for nothing else. So it's the expertise of the vampire we must respect in order to become true Bloodthirsty Chefs. Want to know what a planeswalker tastes like? Ask Sorin Markov. I'll bet he's munched on a couple in his time. 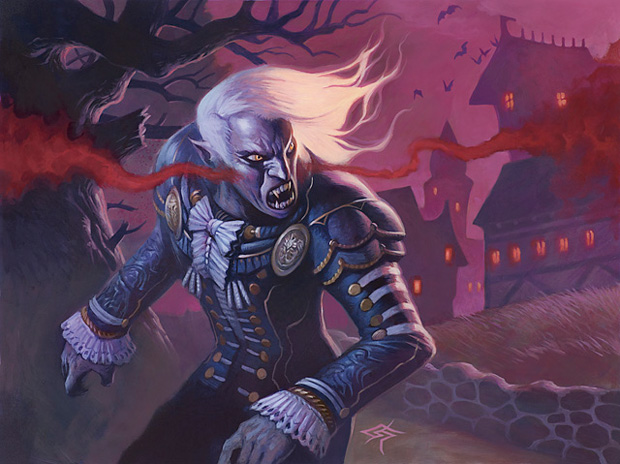 Or ask the vampire whose involuntary fang-baring belies his genteel, noble countenance. Or ask those deranged vampires whose savage thirst has overcome their self-control to such a degree that they have been banished from vampire-controlled manors. 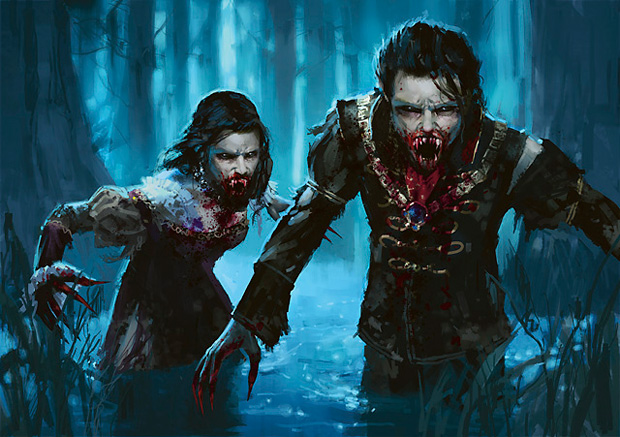 Or ask the gentleman from Vaasgoth, whose ancient thirst is so mighty, so unappeasable, that his legions of vampire minions feel a deeper bloodlust by association. Bloodthirsty Chefs, do your careers a favor. Make a pilgrimage to Vaasgoth and converse with one of the vampires there. Take in their experience with the preparation and appreciation for the sanguine fluid. But of course, for your own safety, go prepared. Arm yourself with some kind of powerful faith, or at least bone up on your flattery, lest your five quarts find their way onto the Bloodlord's menu. 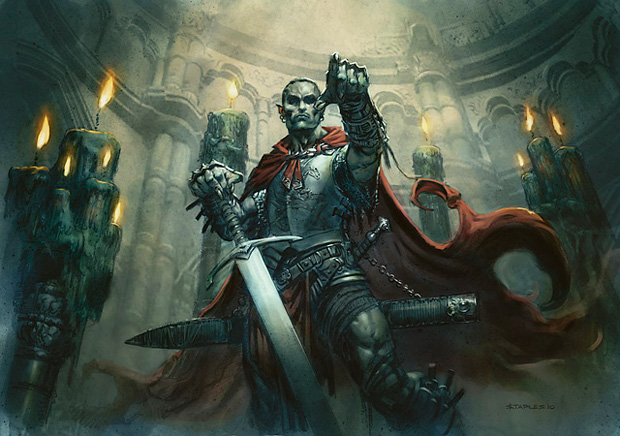 Eating need not be a tedious physiological necessity. By becoming a Bloodthirsty Chef, you too can cartoonishly imagine a planeswalker to resemble a delectable roast turkey leg, and dig in with the best of them!

A couple of quick questions this week.

Dear Doug Beyer,
Regarding your article "M12 from the Inside, Part 2":

Thank you for teaching me this new word - sclera. I can only return the favor by telling you that Sorin's pupils are black just like normal people. Pupil is the black hole at the center of the eye. The colored portion is called "iris", and that is the light colored part in Sorin's pictures.

The pupil is not actually black, it is a hole into the eye's inside, through which light enters. So in order to have a non-black pupil there needs to be some light reflected from the red insides (red eyes due to flash photography), or one must have some sort of light source inside the eye (which is very possible for a being like Sorin with his... erm... unlife essence glimmering through his eyes).
--Kartal T.

Whoops. I was so excited to share the sclera business that I whiffed on the iris/pupil distinction in last week's article. Thanks to Kartal and a few other readers who pointed out my optic gaffe. 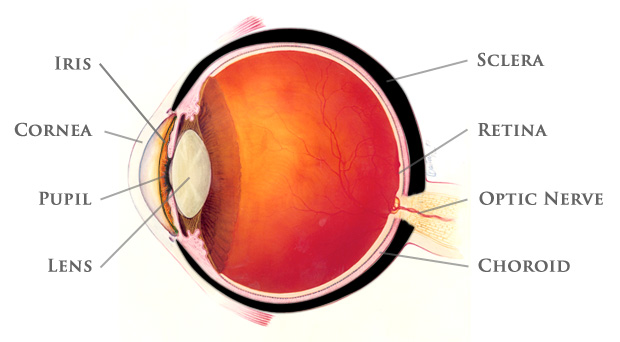 Note that cats and many nocturnal creatures have a reflective layer—the tapetum lucidum—at the back of their eyes, causing their pupils to appear to glow when light shines on them. Sorin has the regular black pupils, indicating that he may not have a tapetum lucidum—or maybe they would glow if anyone used flash photography on him instead of painting the guy all the time. Not sure which method sounds safer.

I was wondering if you could clear up some of the confusion about "basic" versions of planeswalkers? It seems most of the planeswalkers who've gotten cards so far have gotten at some point a "basic" version, which is distinguished by having the card name just be the name of the character -- though as with Elspeth it isn't necessarily the first version that gets printed. I was wondering -- firstly, is this actually deliberate, or is this pattern that I'm noticing spurious? Because if it's real, what's bugging me is, have we seen the basic version of Tezzeret? Because I don't think he has a last name, and there hasn't been a card just called "Tezzeret", but I wonder if maybe Tezzeret the Seeker is intended as his basic version due to you guys not wanting to use a one-word name for a Planeswalker card. (Similarly it seems to me to be obvious that given the circumstances, Nicol Bolas, Planeswalker should count as the basic version of Nicol Bolas... I expect that doesn't apply to Karn, though, due to "Karn Liberated" being a very story-specific name, when he could be e.g. "Karn, Golem Planeswalker". Venser just confuses me and makes me wonder if maybe the pattern really is spurious.)

Thanks for your time,
--Harry

It's a pattern, but perhaps infuriatingly to the pattern-conscious, it is an inconsistent pattern. We definitely wanted to start out by establishing the full names of those original five planeswalkers printed in the Lorwyn set. Their cards could have had more elaborate card names, with epithets like "Death Mage" or "Adept of Flame" or something, but we wanted these characters to be known as themselves first. Subsequent versions of those cards just use the characters' first names. 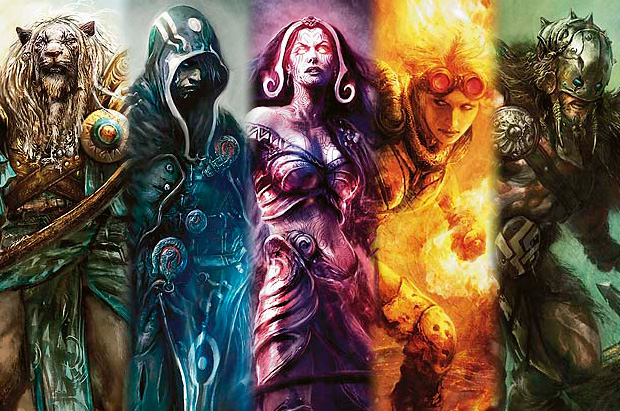 Elspeth didn't follow that pattern; her full name was not the name of her first card. At the time, we thought of her as being more of a secondary character. But we liked her, and players liked her, and when it came time for her to appear in the Scars of Mirrodin storyline, we decided to establish her full name with Elspeth Tirel. Though Elspeth has a lot of competition for the mono-white planeswalker "slot" with Gideon Jura and Ajani Goldmane around, she's a great character and I'm sure we haven't seen the last of her. So I'm glad her surname has been established. Is Elspeth Tirel a more "basic" version of Elspeth than Elspeth, Knight-Errant? It does have a bit of that feel flavorwise. 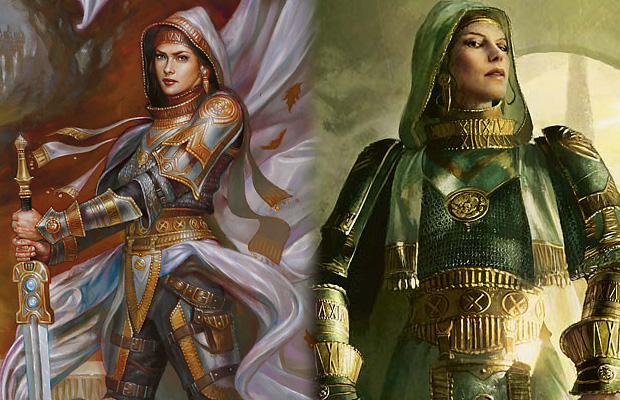 Tezzeret, Koth, Venser, and Karn all lack last names. That single word is their whole name, so there's no real way to print a version of them that fits the "Firstname Lastname" pattern. So if there's such a thing as a "basic version" of any planeswalker, it can't be the presence of a surname that establishes it as such. Tezzeret the Seeker, for example, is how we intended to premiere that character—the essence of Tezzeret—and the blue-black Tezzeret, Agent of Bolas represents an evolution of the career of that metal-bending Esperite. I don't know; maybe someday we'll print a card just called "Tezzeret" that we feel is the truest essence of the character. But I wouldn't worry about the single-named dudes; it's just that we tend to grant planeswalkers a cool epithet in their card name rather than going mononominal, Cher-style. 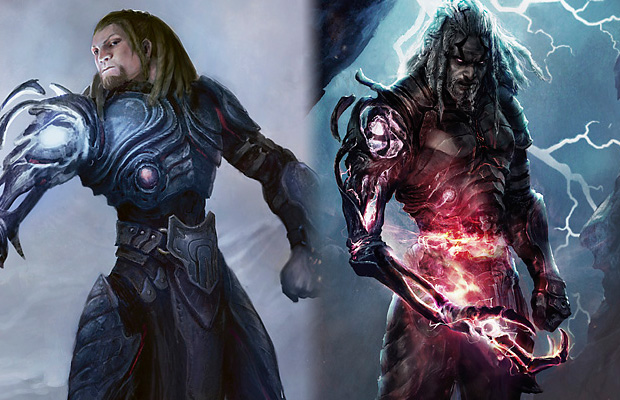 Thanks for the questions, folks! See you next week.