ostume. Noun. A thingy we put on to take the identity of someone else. We don our polyurethane Halloween finery to enter Candy-Seeking Wolverine Mode or to spend the evening subsuming our own identity into that of Sexy Frankenstein. Or whatever. Your mileage may vary. But that's not the only meaning of "costume" I want to talk about today.

In a behind-the-scenes-of-Magic-flavor context—one of my favorite contexts, as contexts go—when we talk about "costume," we mean something more like what a movie studio means. Moviewise, costuming is part of the overall look of the film; it's one part of the production design. It's an element of the set dressing that happens to be stitched onto the actors. Costuming is what communicates the time, place, and detail of the setting in anthropological terms. Costuming is worn culture.

Costuming in Magic art is the same way. It communicates what's going on in the setting just as much as the way the Forests look this year or what phonemes go into the proper names. In fact, you can tell what's up with a world without even looking at anything but la mode. You want a glimpse of the soul of a setting without seeing the Planeswalker's Guide? Check out what people wear there.

The danger-filled, adventure-plane of Zendikar? Exploring gear. Weapons that serve as tools and don't take up a lot of pack space. Durable leather and dirtied, dented bits of plate. 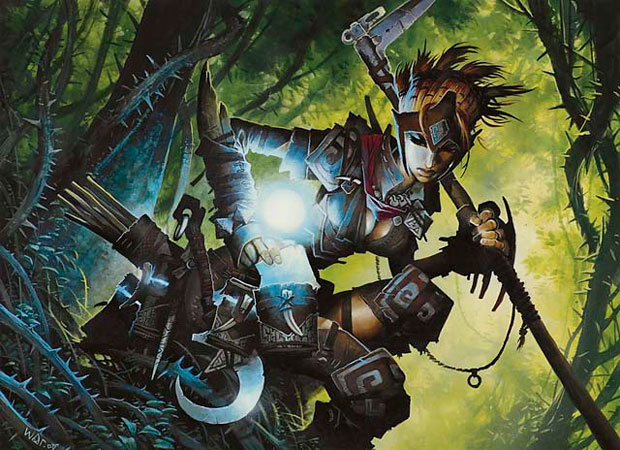 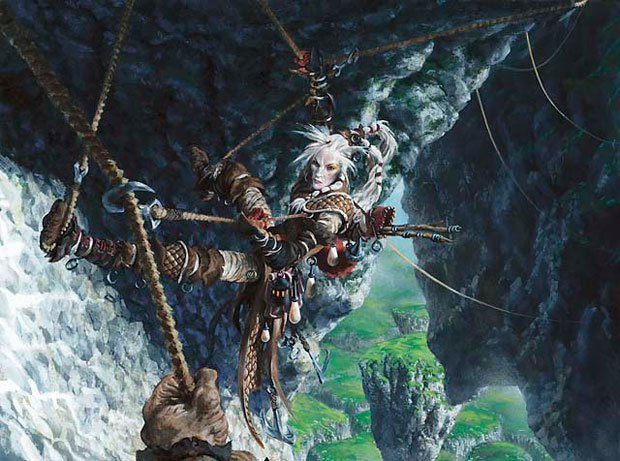 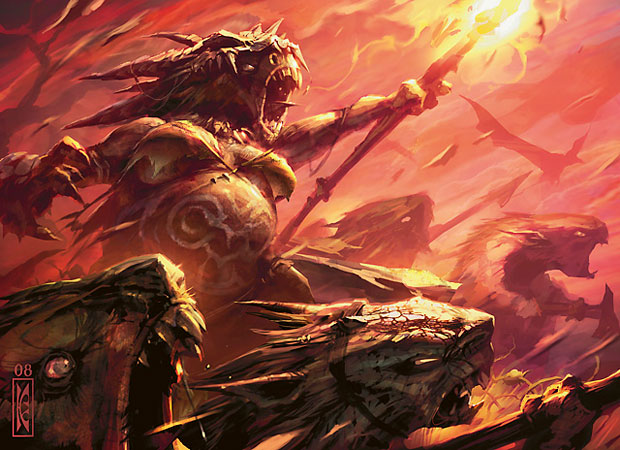 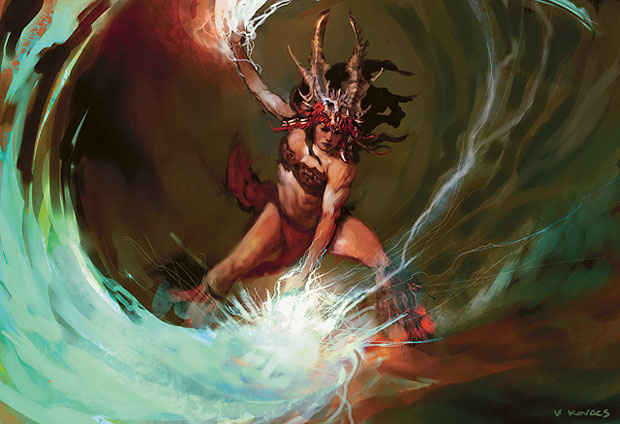 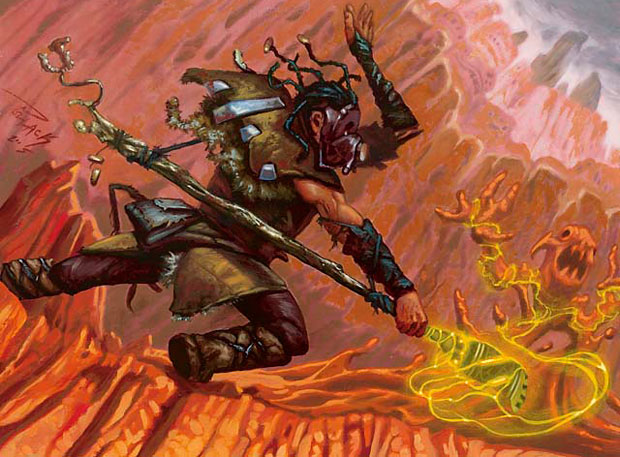 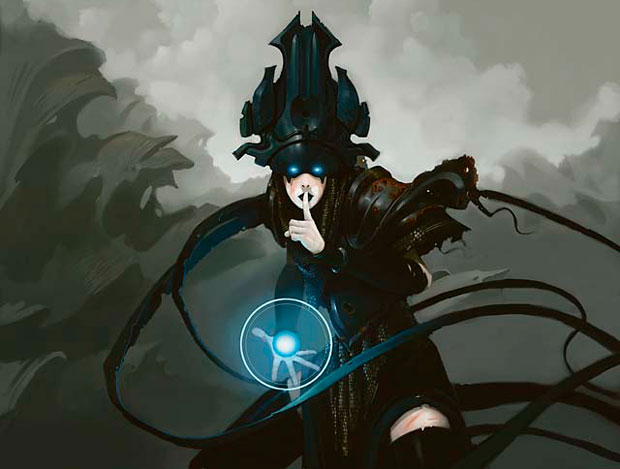 We devote entire pages in our world guides to costuming. In addition to getting to play Slartibartfast as we design a setting's coastlines and continents, we get to play Ngila Dickson or Jean-Paul Gaultier as we craft the worn culture of the plane. We get to think about grommets and coat buttons, collar folds and epaulets. Elbow-length gloves and knee-high boots. Prussian military-inspired armor and Hessian soldier-inspired jackets. Priests' robe-sleeves and vampire slayers' stake-holsters. Corset-reinforced peasant dresses and sleepwear-reminiscent gowns for angels. And hats. If we were going to a gothic horror setting then BY HOLY AVACYN ON HIGH THERE WOULD BE HAAAATS.

This stuff excites us on the Creative Team. The costuming design of a new world is our own personal Project Runway. Although we never actually have to sew or physically construct these looks, we still feel the excitement of outfitting the brave mages, warriors, and common folk who populate Magic's worlds.

So our goal was to evoke the feel of gothic horror tales. To match the setting of traditional vampire or werewolf tales, it should suggest some of the feel of 1790s-to-1800s Western Europe, but we wanted it to have its own identity. We didn't want to exactly match the rainy cobblestones of London, or the dark roads of old Romania, or the chilly evergreens of the Black Forest—but we wanted to evoke elements of all of those. For the costuming of Innistrad's humans, that meant finding clothing designs that could incorporate a range of influences but still look like a cohesive culture. The weather was clearly autumnal—chilly, with damp leaves sticking to your carriage-wheels, and country roads that disappear into drizzly mist. That plus influences like The Cabinet of Dr. Caligari, Nosferatu, and Le pacte des loups meant we'd be seeing a lot of jackets. This is bundling-up weather, which gives our more well-to-do Innistrad humans an excuse to rock some cool leather jackets and strappy belts layered over scarves and cloth tunics, layered over undergarments. 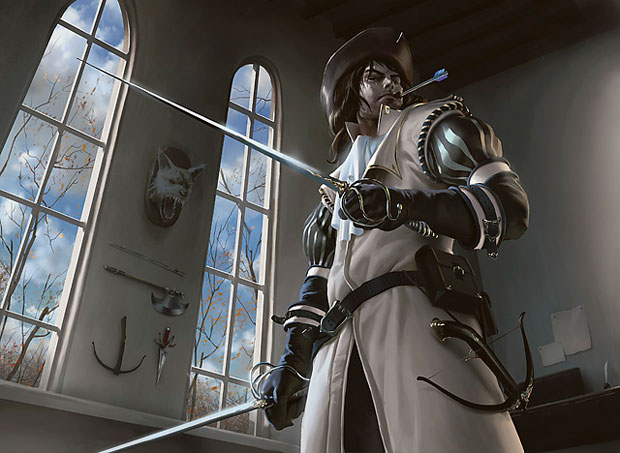 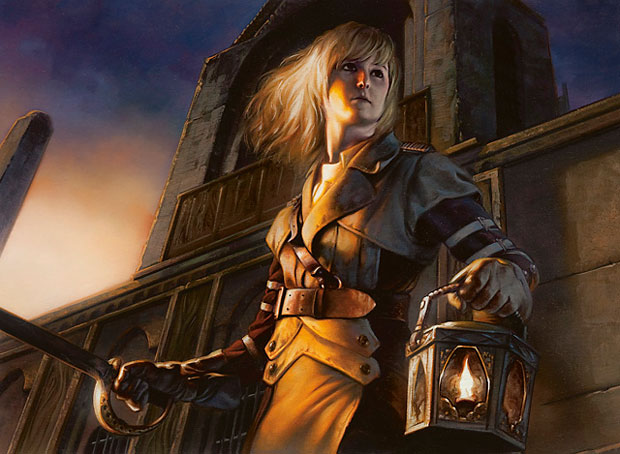 Men and women of the clergy get to wear thick robes with heavy collars and draping sleeves. This does a few things. It protects them from the drafty, see-your-breath weather, certainly. It also keeps their major arteries and delicious flesh-parts out of sight from nasty monsters. But it also reinforces the Victorian standards of modesty common in the haunted tales of the time. 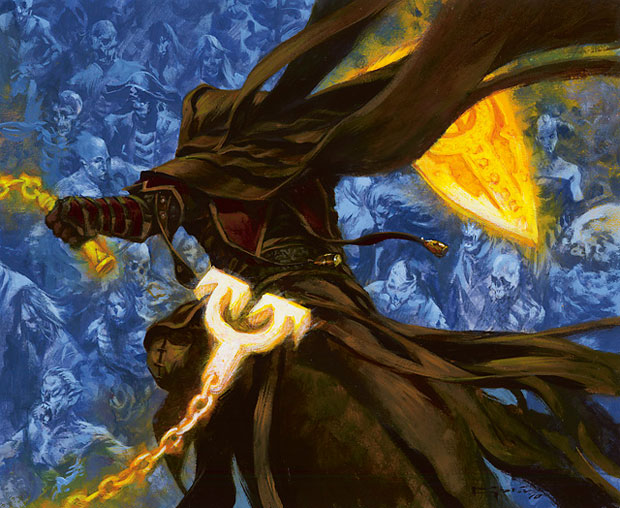 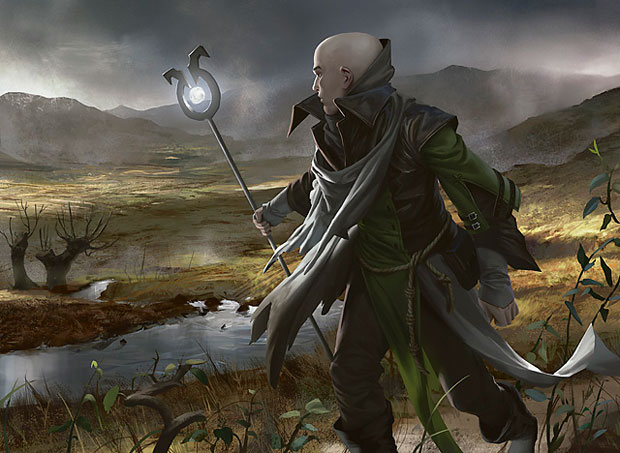 But the commoners get to have their dress-up fun, too. Even simple shepherds, villagers, and farmhands get cool long-coats, hooded cloaks, and maybe even a frilly cravat—in limited quantities—if we're feeling frisky. These are the laborers of this world, but they need not look like they've been in the same mudstained rags since their last sibling died. They get as much design time as the wolf-slayers and the cathar captains. 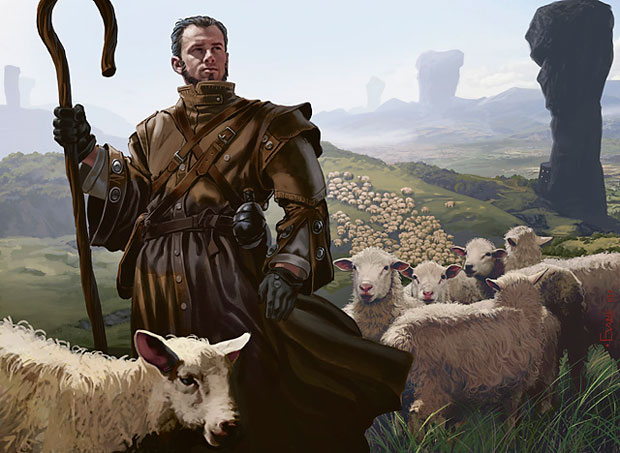 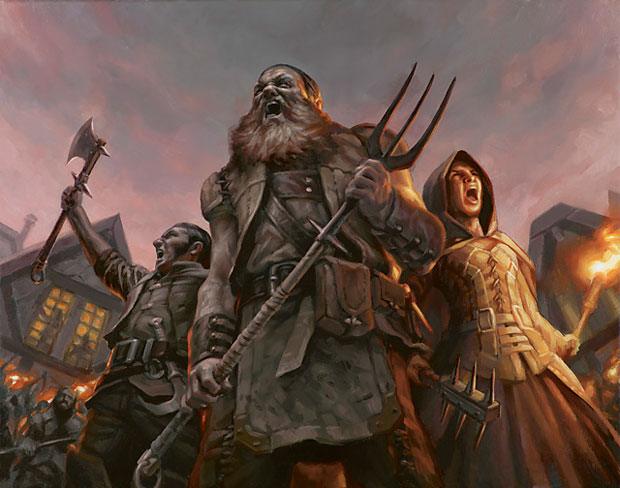 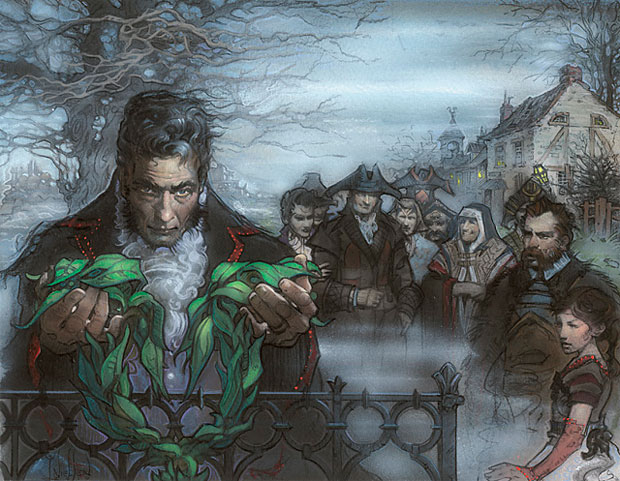 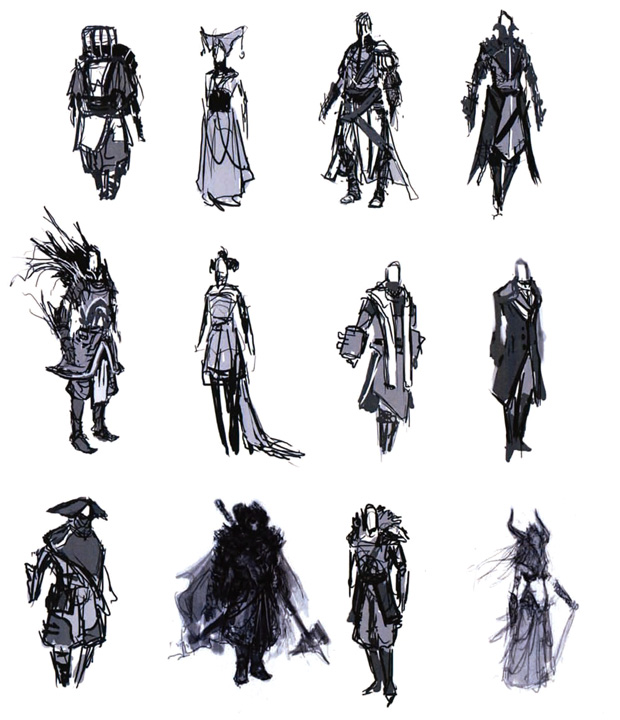 And that's just what the humans wear. We spent a lot of effort nailing down the human costuming. It wasn't just an important way to show the culture and attitude of humanity here, after all. Human costuming is also what a werewolf is shown wearing in its untransformed form, and it's the rags you see lying torn at its feet when it wolfs out. A ragged and dirty version of that human costuming is also what the unhallowed zombies, skaabs, and skeletons of the world wear. 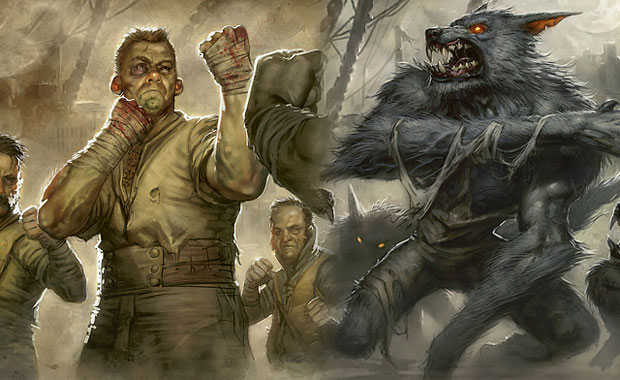 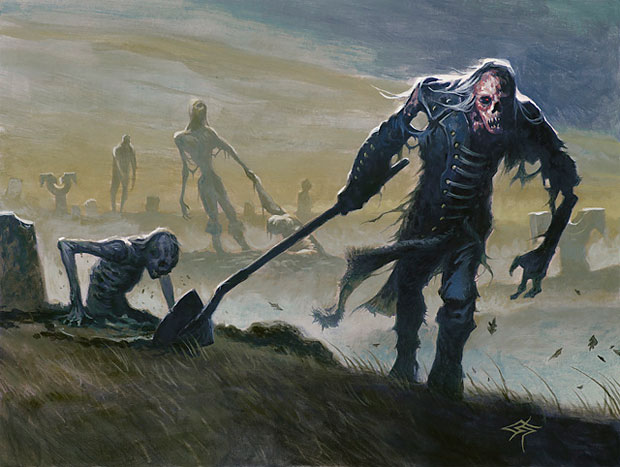 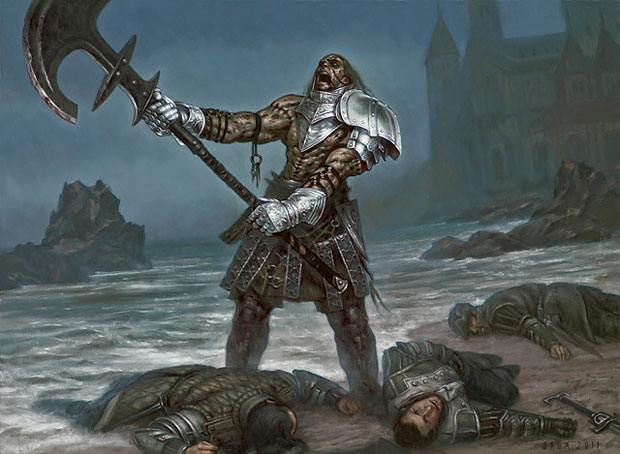 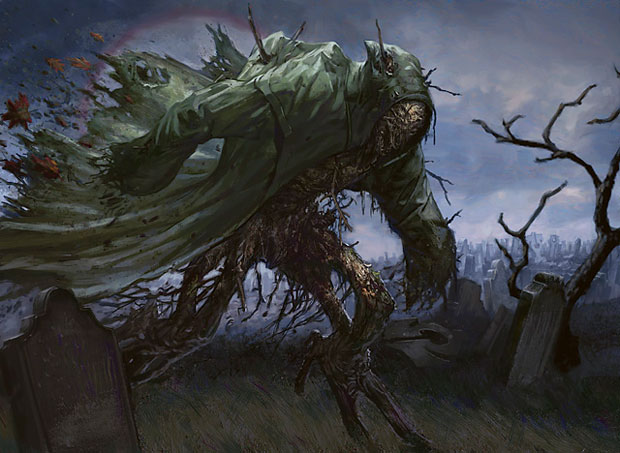 Our next stop on this conveniently timed October costume tour is Vampireville. We knew we wanted Innistrad vampires to be a bit more refined than their Zendikar counterparts; they needed a sense of opulence that would live up to the majestic, shadowy, Gothic castles we wanted them to occupy. We also figured that vampires, in contrast with the Innistrad humans, would not feel the icy air around them, and they wouldn't have to worry about concealing their jugular veins. Consequently they're not afraid to show a bit more of their skin than the humans. 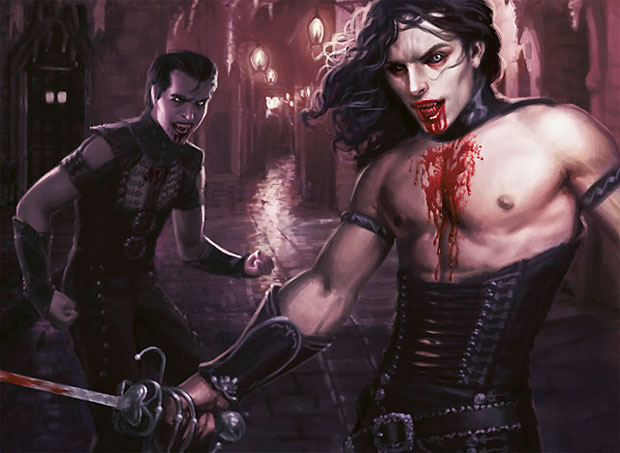 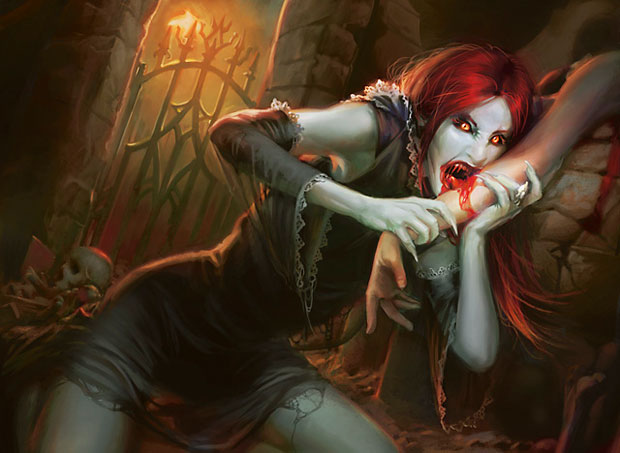 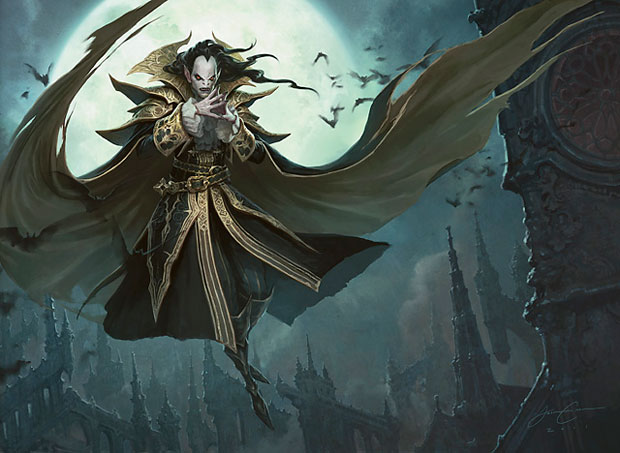 We had fun imagining what "gothic vampire armor" could mean here. Combine the lavish wealth and ennui of the eternal aristocracy with the dark, cobweb-strewn corridors of a gothic horror castle, and you get cool stuff. You'll see more concept art of vampwear when we get to the "Stensia and Vampires" section of the Planeswalker's Guide to Innistrad. 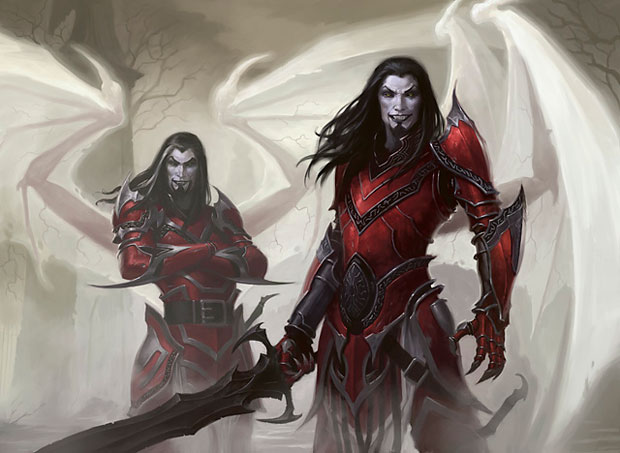 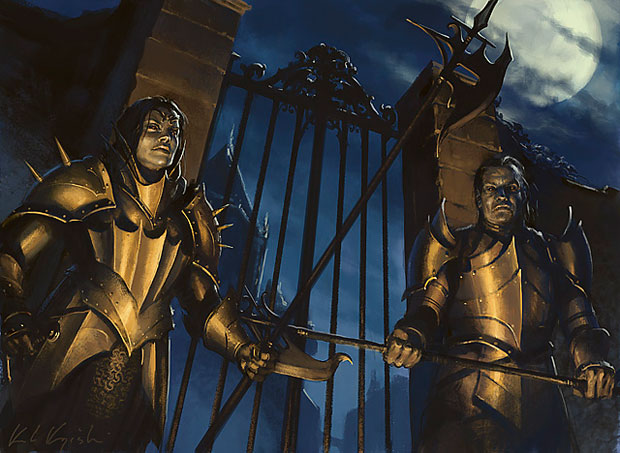 More Than a Sheet with Eyeholes

Innistrad's costuming design extended even to the incorporeal. We knew the Innistrad set would have a good share of Spirits, and we wanted the look of these geists (as we'd come to call them) to make sense in this gothic horror-inspired setting. Chains and drapey, floaty material are represented here, sure; we wanted to deliver on that expectation at least to some degree. But there are also corseted banshees in ragged finery. There are haunting forest bogeymen who lure away children in spectral buttoned jackets. Even in these otherworldly, transparent beings you can see evidence of Innistrad-specific costuming. 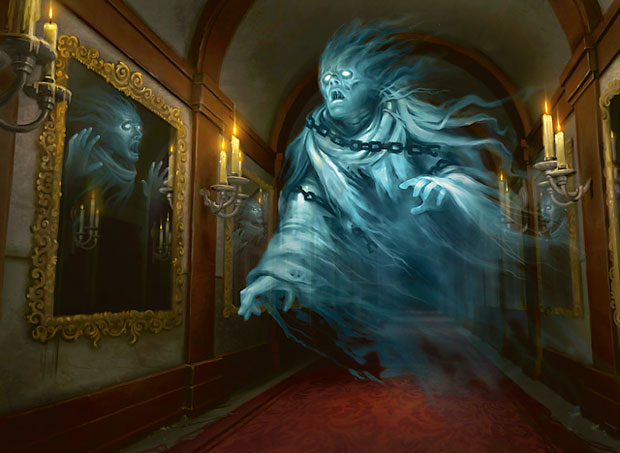 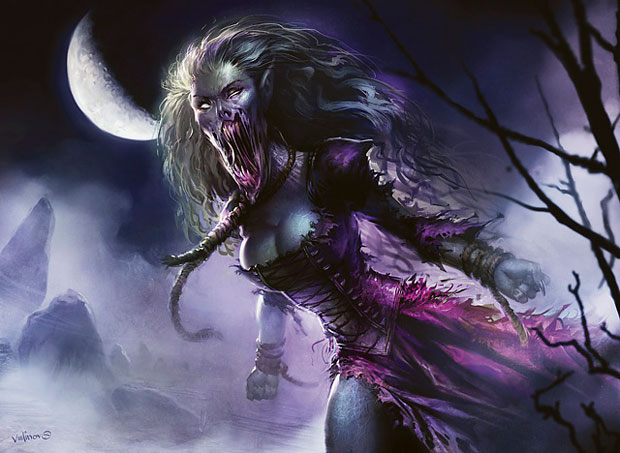 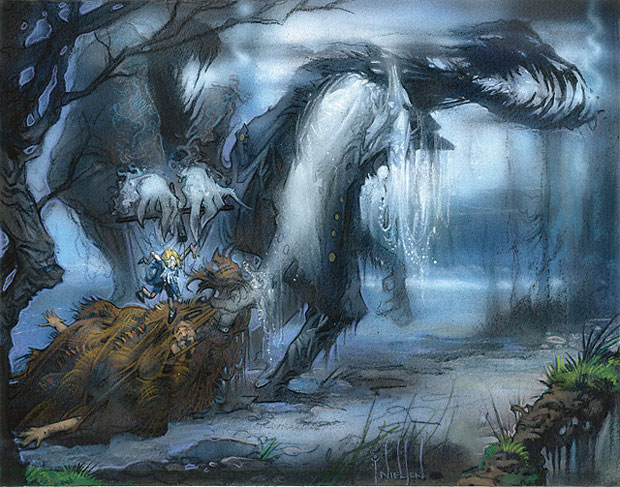 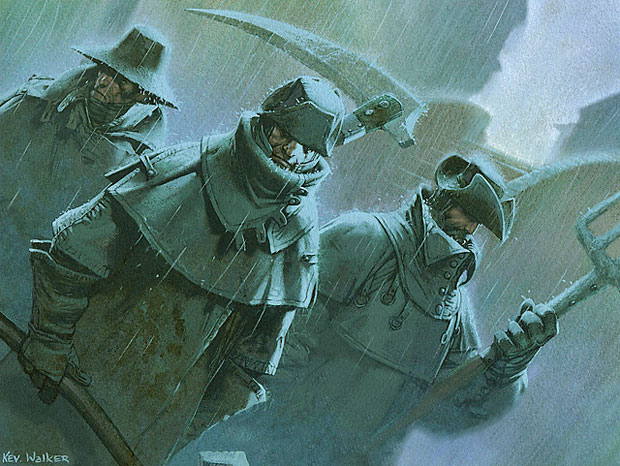 It's October. It's the season for costumes. Are you planning a Magic-themed Halloween costume this month? Do you have photographic evidence of same, or will you procure said evidence this month? If you do, send me a link to your costume photo(s) on Flickr or Tumblr or some other image-hosting device. I'd love to share some of the best ones in this column later this month.

At their height it seems like Avacynian relics were strong against the horrors of Innistrad, if a Planeswalker were to take one of those relics to another plane (let's say Zendikar) and use them against a vampire there, would there be any effect? Or are relics plane-specific regardless of whether the 'monster' is the same on either plane? Likewise, are Planeswalkers like Sorin immune, or at least more resistant, to relics that would repel their non-planeswalker counterparts?

The true source of power for an Avacynian holy symbol or other relic is the faith of the priest or other believer who wields it. The essence of the archangel Avacyn is so strong that an adherent of the Avacynian Church can turn back vampires, banish geists, and blast ghouls to pieces. The holy symbol can serve as a focus to help the cleric concentrate her faith, but it's her own power to channel Avacyn that does the heavy lifting. So if someone were able to bring such a symbol to another plane, as you mention, then it wouldn't make much difference. What you'd really need when facing a Zendikar vampire is the power of Avacyn, and that would have a much harder time transferring. A Zendikar vampire would most likely chuckle at someone like Gideon Jura thrusting forth the symbol of Avacyn—not because the symbol is only respected by the Innistrad strain of vampires, but because Avacyn's power wouldn't be able to make the journey to Zendikar along with Gideon. 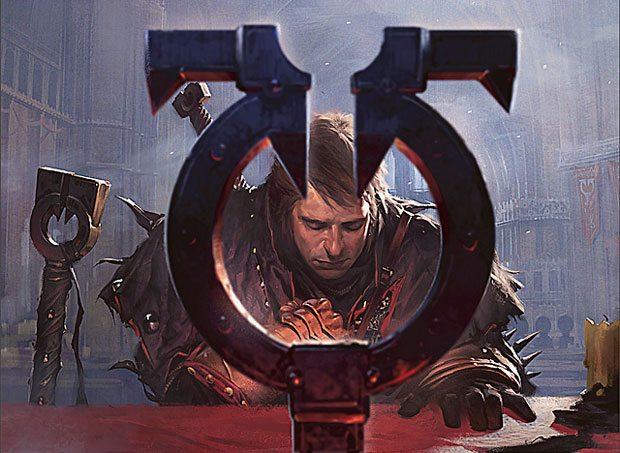 I'd hesitate to make a blanket statement that all planeswalkers are immune to Avacynian faith-magic, but in practice most of them probably are. It's a matter of the relative power of the mages involved. The vampire planeswalker Sorin Markov, with his age, wisdom, and magics drawn from planes all over the Multiverse, is just way more powerful than your average, small-town, one-shot Avacynian cleric—faith in a mighty archangel or no, the battle of wills and the arsenal of magical resources is just really likely to go Sorin's way. (And then so is lunch, shortly thereafter. Om nom.)

Interestingly, there are other reasons why Sorin in particular may have ways to remain unaffected by such magic. We'll get to that later in this block.

Next week: Nephalia and a look at some of the creepier expressions of the Innistrad afterlife. In the meantime, link me your Magic-themed costumes!