ow complex can a Magic set be? Here's a shocker: I believe the answer depends on the flavor.

If you want to talk complexity, you have to think about how brains work. Humans are amazingly good at synchronizing thousands of neurons in a complex neurotransmitter ballet, taking a massive army of individual brain cells and organizing them all to perform a single cognitive task. Another way of saying that is that humans are really bad at multitasking.

At this point in writing this article, my coworkers on the creative team had a discussion about how every episode of "Three's Company" was essentially the same. Then we discussed whether each member of the team could be mapped to a character in the show. I was Janet, the brunette, I think? Maybe that mapping doesn't really work out. Now I have the theme song in my head. Great. 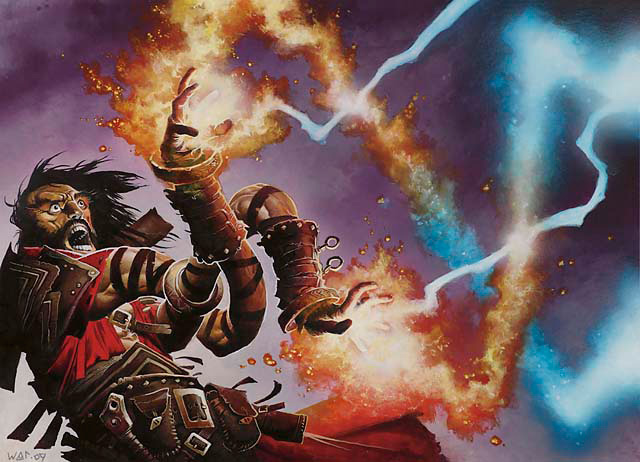 People can switch between tasks pretty well, thank goodness. We have an immensely flexible lump of brain matter that can adapt to a staggering variety of tasks. And it's a good thing, because during a given day, we're assaulted by more than we realize. So if that's true, then why do I say that we're so bad at multitasking? There's good evidence that people are able to learn to switch between tasks more and more quickly, if given enough practice. We can shorten the amount of time it takes to switch gears and therefore we can learn to perform more tasks in a given span of time—say, during a Magic game, or during a work day. But ultimately we're limited by the way the prefrontal cortex works. It processes information a certain way, and that way is (to super-generalize) by focusing on one thing at a time. There are exceptions; in the presence of sufficient rewards, for example, we may be able to process concurrently in a real sense. But generally, we never get all that good at true multitasking—at actually paying attention to two different things at once.

It was at this point that I realized that my assumptions about some web articles coming up in the beginning of 2012 were wrong. I hunted down editor Kelly Digges to talk about those scheduling concerns. Everybody's very busy in the office right now, as it's only a couple of weeks until the holiday break when the Wizards of the Coast offices shut down, so it's a tough time to be moving things around. But Kelly and I were able to clarify the schedule and shuffle some things around to get it all to work. The way we settled it, nobody on the web team should have to be doing editing or markup or illustration work on those articles over the holiday break, which is as Santa Claus intended. I took a moment to stress about the fact that I hadn't started any of my holiday shopping yet. Can't worry about that now. Back to desk. Back to article.

This human limitation on multitasking is one of the things that makes Magic interesting, for example. You're fighting a magical war on multiple cognitive fronts. You're simultaneously keeping track of what's in your hand, how many Zombies or Werewolves or Spirit tokens are on the battlefield, what the life totals are, how many lands you need to draw before you can flash back that Geistflame, what triggers are going to go off during your next upkeep, how loyal that Liliana of the Veil on the other side of the board is getting, whether that bead represents a green 2/2 Wolf or a slightly misplaced +1/+1 counter, whether your library still has answers for Liliana and what the likelihood of drawing them will be, and so on. Magic tests our ability to manage all of those tasks at the same time. The draw step sometimes determines the course of the game; certainly luck has a role in a game of shuffled cards. But your ability to efficiently coordinate the array of the mental tasks in front of you, and your ability to swap them successfully in and out of your conscious attention, determines to a large degree whether you are going to win or lose.

At this point, Creative Team manager Brady Dommermuth asked the team a hypothetical story question, which led to a brief discussion about the role of story in video games. In what ways might a narrative arc be able to enhance—or, if done poorly, detract from—the experience of playing through a digital game? For example, why do people skip past bad video-game dialogue? It's annoying, sure, but what makes it so annoying? Certainly some of it is because the writing is just weak. But we decided that there might be something else going on. The fact that the game experience doesn't depend on what's being said makes it too separate, too unimportant. If that dialogue is skippable, then you naturally get annoyed at having to sit through it. If it doesn't actually affect any of the decisions I make in the game, why is it there at all? We all stroked our chins thoughtfully for a moment, pondering that, and then we flipped around in our chairs and got back to our various tasks. Unbidden, a tune came to my brain. "Come and knock on our door..." Dammit!

For the last few months, as I've been writing to you about Innistrad, we have been hard at work on future Magic products. Some of you guys know how far in the future R&D and the other departments at Wizards have to work to get the cards out the door at the right times. Recently, we've been putting the last editing touches on something for next summer, checking sketches and final pieces of art that are already coming in for a product coming out next fall, evaluating early name and flavor text submissions for another fall product, extending world detail and writing early art descriptions for something coming up in the first months of 2013, brainstorming cool stuff for digital and analog releases that might crop up thereafter, and gearing up to do some concept illustration for something coming up even further out. And that kind of thing doesn't just come up in my job, of course—everybody has to manage school vs. Magic vs. work vs. family vs. social life vs. leisure time vs. TV show theme songs, or some subset thereof. To stay on top of it all is another example of testing the brain's ability to manage multiple tasks. It's not so much simultaneity as it is frequent swapping. So what does this have to do with Magic flavor, and with how complex a set can be?

About now, the team got distracted by watching a video about a porcupine eating corn on the cob. We're only human. I mean, look at that thing. It... it really likes that corn. Is it really that hard to blame the porcupine, though? Doesn't corn's entire evolutionary strategy depend on being delicious to a wide array of omnivores? And doesn't the porcupine's evolutionary strategy depend in part on being able to defend its calorie sources from rivals? ...Super cutely, I guess?

Ultimately I don't think there's a strict number of mechanics or subthemes that a set can support. It's not like we could do a ton of data analysis on every Magic set there has ever been and decide that the context-free, Platonically correct number of keyword mechanics is, like, FOUR. Probably the number ZERO is incorrect, and TWENTY-PLUS is also probably right out (do we agree on this, Future Sight?), but how many is correct in between there depends on your goals. In particular, you have to consider how much you want to test people's ability to swap between tasks. How complex was game play last year, and how complex do we expect it to be next year? How much do we want to swing the pendulum since, say, New Phyrexia, or Magic 2012? What kinds of cards are people gravitating to, and what kinds of decks are being played at kitchen tables and at tournaments? And—super importantly—what effect does the flavor have on the player's ability to learn and grasp those mechanics? How well do the flavor and mechanics merge into one silky, cognitively unified whole?

Another distraction: I have to fill out my end-of-year self-evaluation form. It's where I tell my manager how I think I did at achieving my job goals for this year. It's just another kind of writing, so it shouldn't be that hard to transition into thinking about it. But it is a very different type of writing, both in style and in content. My prefrontal cortex balks at the prospect. I make stress noises. Yay December! 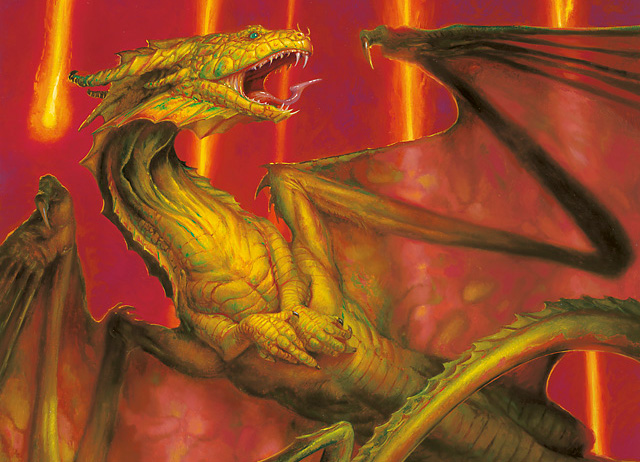 Flavor lets you get away with more because it lets you unify a large number of complex ideas into one familiar category. When a mechanic is flavorful, then rather than memorizing a dry list of everything that the cards do, you can rely on your prior knowledge to guide you. Flavor provides cognitive shorthand. For example, this:

Is a lot easier to hold in your mind than this:

Is that a good place to stop for this week? I'm scanning my brain for what else I wanted to say on the subject.

I need to ask the girlfriend how the meeting with the contractors went, for those renovations we might do to our front porch. I'm concerned about the cost, but the plans look nice; it would really improve the way the entry looks. "Come and knock on our"—DAMMIT.

See you guys next week.