ast Lightning Bolt, and your fingers don't feel crispy afterwards. You get a rush, certainly, and your foe is dead, and you get to deploy its electric harm just as you would the real thing.

A game has rules, and playing the game under those rules can simulate experiences of, or evoke imagery of, elements of the real or imagined worlds. However, the game's rules don't recreate every detail of the imagined world; the game omits or abstracts away many details.

Chess, for instance, involves pieces named things like "bishop" and "knight," and has rules for "attacking" and "castling," evoking the feel of two armies at war—yet it's still very abstract, omitting and simplifying countless details about the actual experience of war. The card game "War" is even more abstract, reducing the fight of two generals down to comparing the card ranks of shuffled decks. 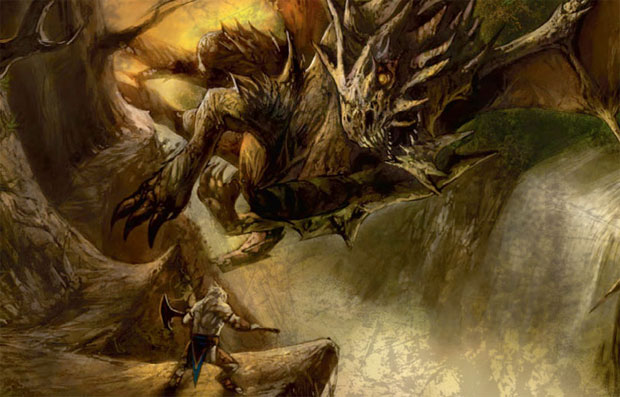 Magic lies farther over toward the detail and simulation end than these two examples. Even if you forget about the art, card names, flavor text (which I do not advise!), the game's rules are permeated with terms and concepts that ply the fantasy metaphor. You cast spells. You attack with creatures. You have a newborn dragon Dragon Broodmother to grow into a massive, scaly adult capable of defeating a planeswalker in a single blow. 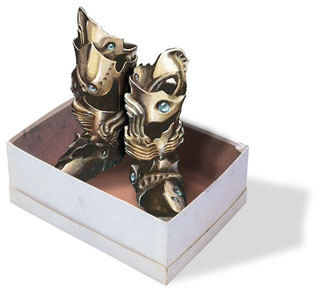 Craw Wurm appreciated the gesture, but wondered how much thought Garruk had put into this year's birthday present.

But abstraction is still built solidly into Magic. For every "You can break your pet spider out of the Ice Cage by hitting it" there's a "cycling Barren Moor causes me to be able to Astral Slide Eternal Witness from the game." For every "Stone Giant can only throw creatures he's strong enough to lift" there's a "my wurm is untargetable because it's Lightning Greaves." There are flavor irregularities that arise from the necessity of making a game that plays smoothly and predictably. And rules that allow for game-play creativity also enable flavor strangeness, especially when multiple cards (that are often flavorful on their own) interact.

You might think I would be on a crusade to "fix" this. Certainly we on the creative team lobby against major flavor violations (humanoids with absurd power/toughnesses, winged creatures not flying, the usual), and I'm happy whenever rules text contributes to Magic's mage-mashing metaphor. But some simplification is good. Some wiggle room between the game and the world behind it is good. The key to a great, flavorful card is the proper balance between playability and verisimilitude.

I have three Magic 2010 preview cards to show you today. I asked for three preview cards because I wanted to showcase M10's top-down and flavor-infused, but also simple and restrained, design sensibilities. (Also I am greedy. The unwritten rules of preview weeks can go suck it.) These spells are powerful but not all that flashy. They just deliver a lot of flavor with just a few lines of text and uncomplicated gameplay, and to me they're works of art. 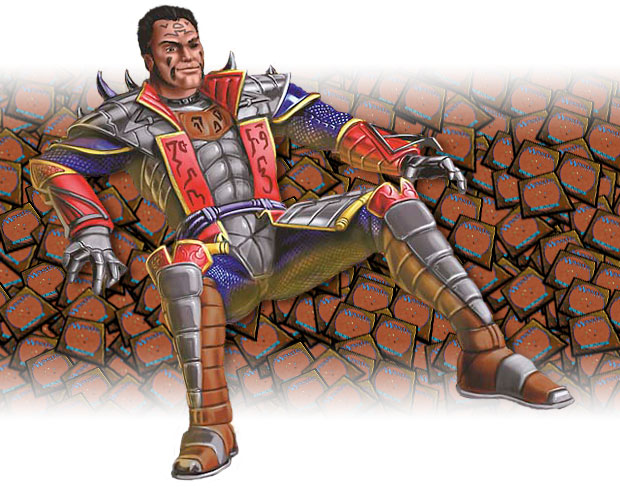 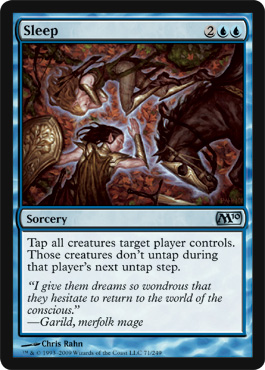 Nighty-night. The process of this card's design was a fascinating delve into people's flavor intuitions. When Sleep was first put into the file, it was an instant, it didn't keep the creatures tapped for a turn, and it didn't affect artifact creatures—sort of a non-robot-hitting Turnabout. Some thought the non-artifact specification didn't pull its weight; it added additional flavor (presumably Masticores and Platinum Angels don't sleep) but at the cost of keeping track of additional characteristics. In the end, it wasn't obvious to everyone that an artificial being wouldn't be affected by sleep magic (according to D&D, it was pointed out, elves aren't affected by sleep magic!), and the nonartifact clause was removed to streamline the card. The card was changed to a sorcery with a "duration" to provide more of the feel of a long, magically-generated nap rather than an end-of-turn trick. 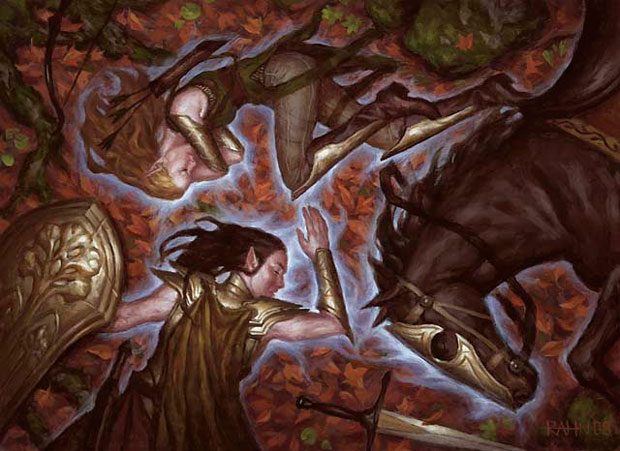 The card is powerful now in both feel and game play. Although I've had many a level 1 D&D wizard cast sleep to mixed results, Magic's Sleep is a brutal game-winner. When your guys are hit by Sleep, you spend a turn casting as many awake blockers as you can, and you just yell at your guys to wake up already, as you are facing not just an alpha strike, but a beta strike as well. I'm excited to see whether the spell can enable some aggressive blue-based decks, not just in M10 Limited, but Constructed as well.

Rise from the Grave

The next card costs more than Zombify, granted. It can reanimate creatures in your opponent's graveyard, so it's more powerful, but mostly it's likely that Zombify is too good. But the thing that always bugged me about Zombify is that, contrary to the name, it doesn't make the creature a Zombie. 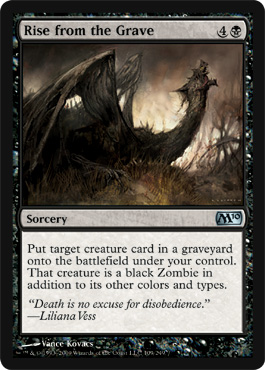 The game-play feel of killing, then reanimating an opponent's creature is satisfyingly devious. And the flavor of making the creature a black Zombie reinforces that sense of necromantic betrayal, whether you cast it or not.

Developer: (watching some M10 Limited matches) Did you play your red? How's that Magma Phoenix playing?
Doug: Oh, it's doing great things—as a Zombie Phoenix on the other side of the board!
Doug's opponent: Heh heh heh. 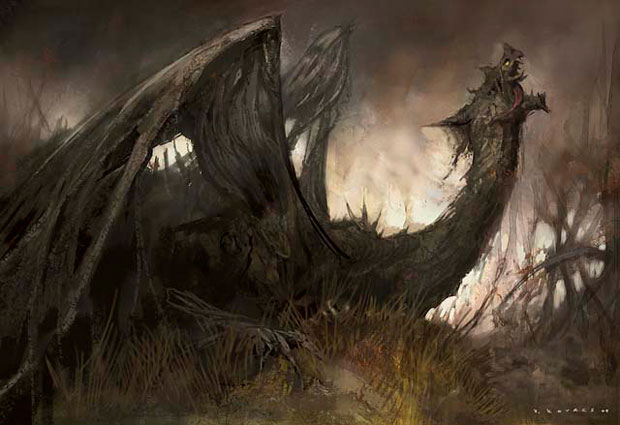 I love the hell out of this card. For me, the enjoyment that the extra black-Zombie line generates more than makes up for the line of text on the card (plus it interacts nicely with cards like Glen Elendra Liege or Cemetery Reaper—I'm just saying). This is the kind of flavor vs. function balance M10 (and Magic in general) seeks—how can the card deliver the maximum amount of flavor fun with just a little bit of added complexity? If another line would make it resonate only a tiny bit more with the addition of lots of text, it's probably not worth adding. If the extra text actively creates headaches during game play, it's almost certainly not worth adding. But if, like this, the text adds major joy, and probably lines up with people's expectations of what the spell does anyway, then it's absolutely worth a few more words. 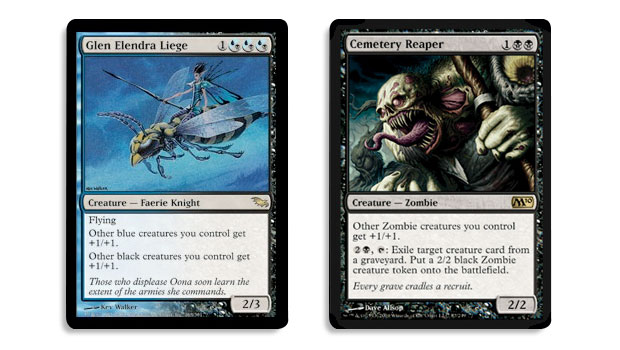 FAQ Entry for Rise from the Grave

Rise from the Grave
{4}{B}
Sorcery
Put target creature card in a graveyard onto the battlefield under your control. That creature is a black Zombie in addition to its other colors and types.

* Rise from the Grave doesn't overwrite any previous colors or types. Rather, it adds another color and another subtype.
* If the targeted creature is normally colorless, it will simply become black. It won't be both black and colorless.
* A later effect that changes the affected creature's colors will overwrite that part of Rise from the Grave effect; the creature will be just the new color. The same is true about an effect that changes the affected creature's types or subtypes.

My last card today is called Gargoyle Castle. The concept is straightforward—it's a place guarded by an ominous, inanimate stone gargoyle. When conditions become dire, the gargoyle wakes up (wrecking part of the castle structure along with it) and comes after you. 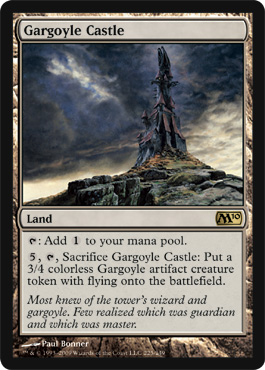 It's a simple card; it's easy to read, straightforward to play, and there's not even a FAQ entry for it. But it feels like an Alpha card. It feels natural, like a Thicket Basilisk turning a creature to stone or a Fireball torching three grouped-up creatures. This is what a castle guarded by a gargoyle is supposed to feel like.

And there's quite a feel. It's a late-game threat, but it delivers a powerful sense of lurking menace long before it's activated. "Oh great, she's got a turn-two Gargoyle Castle. I've got to get some defenses up, because that thing's going to wake up and come eat my face before too long." The gargoyle doesn't mess around. 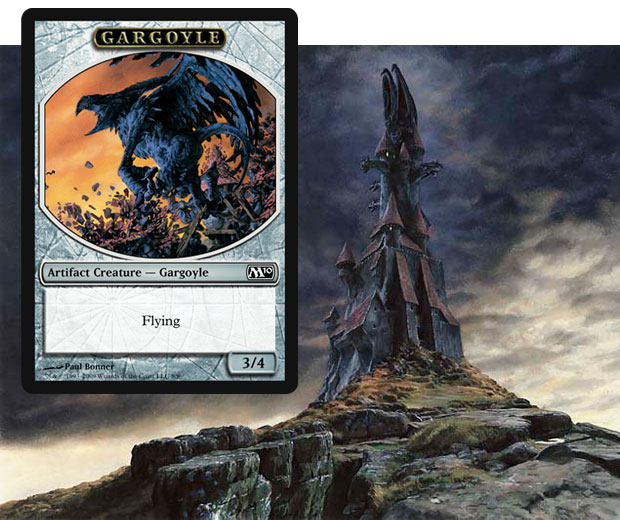 And it's all because of top-down, a commitment to flavor from the get-go rather than an assembly-line concepting pass after the words are already on the card. Rather than using flavor to give an attempt at explaining what's going on with the rules text, it puts the flavor first, and builds a (pretty darned powerful) card around it. That's the message of M10, and of more and more of Magic going forward.

The next planeswalker novel, The Purifying Fire, starring Chandra Nalaar, hit shelves yesterday! As a reminder, author Laura Resnick is on a blog tour this week. Find out more about her at these sites!

Letter of the ... Go to the Prerelease!

This week's letter comes from my editor Kelly, who asks, "Where's your article?" My answer is to finish this article and get a move on turning it in. But I want to take a moment to urge you to go this weekend's Magic 2010 Prerelease to get a sense firsthand of the feel of these cards. The set is a renaissance of simple, powerful flavor, a return to the game's Garfieldian roots.

And if it isn't obvious, there's never been a better time to bring a friend along to the Prerelease. Bring someone who's never played Magic before but who would enjoy the fantasy metaphor, even if they just ride shotgun to watch you cast Sleep and turn your foes' guys into Zombie Dragons. This set uses flavor to make the game as close to self-explanatory as it's ever been, so use that on your side to introduce someone to the game this weekend.

And, of course, enjoy a little spell-slinging yourself.