isten up, troops. You are Magic's elite force of fighting Vorthoses. You've survived Magic's not-quite-one-year intensive training course, the Alara Elite Flavor Officer Trials—or "Shard Camp" as some of you planestompers call it—and you've become the world's experts on the flora, fauna, and folklore of those five collided dirt-sacks we call the plane of Alara. Through careful study of the cards of the Shards of Alara block, A Planeswalker's Guide to Alara, Savor the Flavor, Magic Arcana, and other voluminous venues of Vorthosian verse, and through your own plane-traipsing journeys and imaginations, you have attained an unsurpassed level of excellence in flavor knowledge and planeswalking preparedness.

Today I will bestow on you the rank of Vorthos General, First Class. But before I do, you must take this graduation day exam, a final test of your Vorthosian expertise. Should you prove your merit, you will go down in history as one of the multiverse's most knowledgeable planeswalkers. Should you miss, say, three or more of these, you get to scrub all the gargoyles on the Shard Camp officer's tower. The high ones.

The word "coatl" is from the real-world language Nahuatl, language of the Aztecs, still spoken today in Central America. What does coatl mean in English? 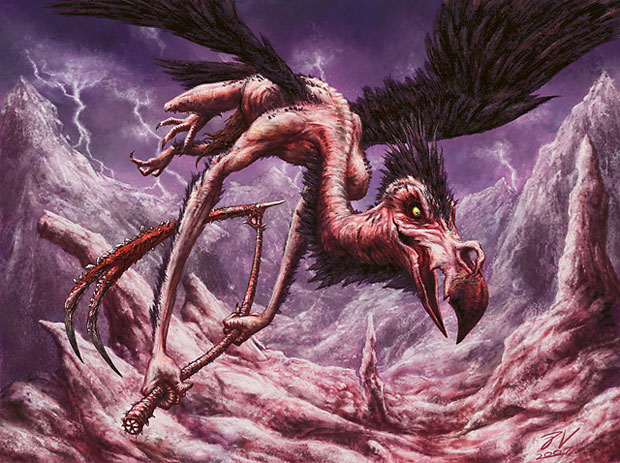 The kathari are a race of buzzard-like bird humanoids that scavenge the death-choked realms of Grixis. The kathari's name was inspired by the Greek word katharos—meaning what? 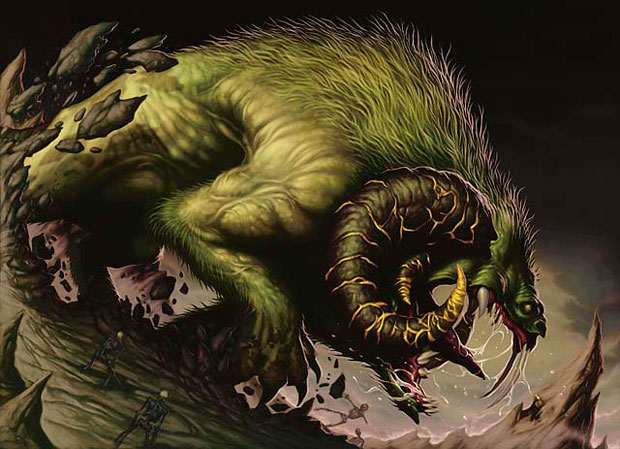 Every shard of Alara is a haven for many types of strange and exotic creatures. Which of these lists correctly matches five Alaran creatures to their native shards?

Which of these is not a social caste on the shard of Bant?

Etherium is the æther-infused metal used on Esper to perfect the inherent flaws of organic life. Who invented etherium?

The flavor text of Volcanic Submersion refers to a phenomenon that occurs at the end of the lives of Jund dragons, although it does not refer to this final act by name.

A dragon's death is almost as feared as its life. Old, dying dragons throw themselves into volcanoes, causing massive upheaval and widespread disaster. 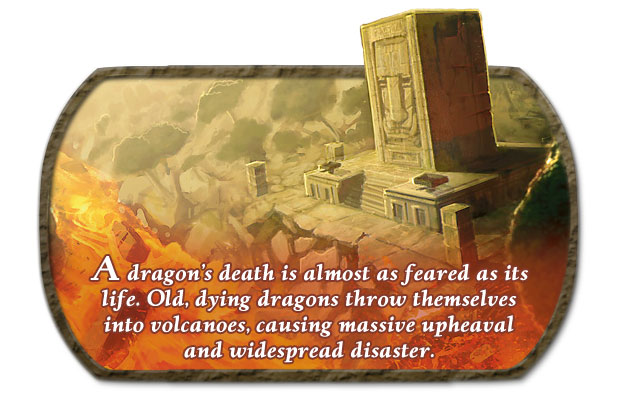 What is the name of this drastic, draconic phenomenon?

Villages, cities, countries, and landmarks dot the shard-realms. Which of these lists correctly matches five Alaran locations to their shards?

Rhoxes are a proud, reverent race of burly rhino-humanoids. Before we saw them in Bant, on what world did we see the first rhox creature? (Corrected!)

Beings throughout Alara have served as the eyes and ears of Nicol Bolas on the five shards, often unknowingly committing acts that would advance his schemes. Which of these people or groups is not secretly serving Bolas?

How did you fare, troops? I know I'll see some of you with your wire brushes, up on the officer's tower, scrubbin' granite. Those of you who scored well—congratulations! I'll see you around the multiverse.

I want to return to an earlier topic discussed in this Savor the Flavor. Alexander, clearly a master of the color wheel, has insights about villainy and the color green.

Dear Doug Beyer,
Regarding your article "Insights from the Inbox":

Alright, so I've been combing through your back catalogue, and came across your thoughts regarding Green as a hard color to have as a villain.

I agree it's hard to have a Green -villain- in the sense of a single person up to no good and creating conflict. It's hard to make Green evil without throwing in another color. Those eco-terrorists for example would almost certainly be green black (as soon as your means becomes 'any means necessary', that's pretty solid Black turf). But while Green is a tough villain, I think it's an easy and good antagonist.

Because Green is just about natural growth and instinct, it can't be reasoned with. That gives it a level of horror a sentient villain can't match. The thallids in Fallen Empires aren't evil per se, for example, they're just really fast growing fungi. They're just doing their thing without a care in the world -growing really quickly - it's just that that happens to conflict with other, non-fungus creatures around them. But the thallids aren't after power, knowledge, fairness or fun, they're just growing. They have zero malice, or even motive. Antagonists of any other color presumably have some goal or reasoning that makes their villains understandable, but an out of control infestation of deadly plants (for example) doesn't have an agenda, end goal or even sentience. But they can still be pretty terrifying for the protagonist.

So, know I'm pretty late on the uptake here, but wanted to share my thoughts anywho.
--Alexander

Alexander's letter is a great and well-stated angle for green's variety of villainy. Although malicious, premeditated evil is generally out of flavor for green, green is home to some of the most large-scale and petrifying antagonists possible, which could certainly serve as the adversary in Magic stories. In a way, a mass of thallids or a rampant Mycoloth is a scarier antagonist than a sentient villain, like a scheming vampire lord, say. A vampire you could theoretically bargain with—you could appeal to his power-lust to buy him off in some way, do favors for him to get your loved ones safely out of his sights, or appeal to his vanity to trick him somehow. But none of those things work on a classic green monster, any more than they could work on a virus or a tornado. ("Hey, Mr. Tornado—lookin' good today. I mean it, man—you're crushing it today. Hey, ah, speaking of crushing things—mind doing me a favor?") I'm still on the hunt for how green can be a true villain, but Alexander's got a good grasp on green's potential for agenda-free terrorization.