It's Not a Discard Pile

mean, it is a discard pile. You strip away the layers of flavor and imaginative relabeling and the graveyard is a place where your cards simply get dissed. It's no different from the already-played, one-and-done discard pile in any other card game. Functionally the graveyard is simply an arbitrarily assigned area of your table where you chuck the not-currently-important cards. 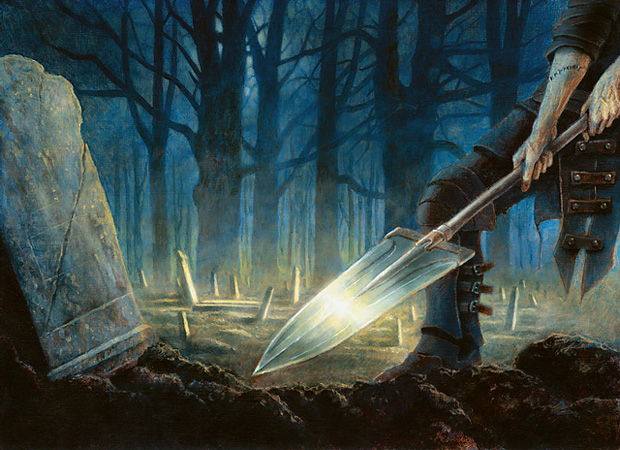 But here's the thesis for the day: add a touch of flavor and you get worlds of possibilities.

Discard pile? Sure. Got it. Card game concept. Like in gin rummy. Fine.

That's what I love about working on the flavor aspects of a card game. Mundane game terms get all lore-deep and epic-clad. Numbers become edged steel and hammered plate. All it takes is a word.

Magic has been embracing its flavor roots a lot lately. The in-play zone has become the battlefield. The removed-from-the-game zone (*Vorthos cringe*) is now the mysterious exile (ahh). The core set and classic mainstays of fantasy are up in a tree, making out and spelling "kissing" one letter at a time. And then there's Innistrad—kind of the love child of graveyard-matters and Magic's trend of getting its flavor groove on. Ever since Odyssey had us discarding and thresholding and back-flashing but did not cart us off to a world soaked in horror flavor, Innistrad has been lurking in the corridors of possibility. And now, finally, the graveyard is getting its proper flavor due. 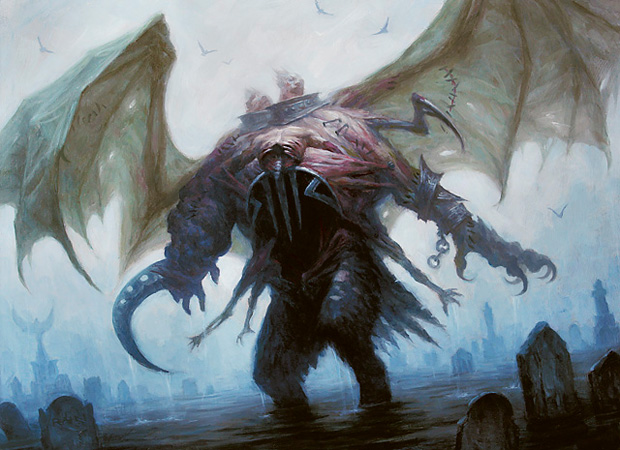 All thanks to naming it something other than "the discard pile."

Without that word "graveyard," an entire wing of creepy fantasy tropes might have been lost to us. The color black would have lost a lot of its flavor; you don't sign diabolic contracts and don bone-woven robes in order to gain the power to manipulate some ol' discard pile. Innistrad's morbid mechanic, the new (but very commonsensical) rules term "dies," the blue zombies that require dead bodies to summon—those are all enabled by the identification of the discard pile as a graveyard.

That's what flavor does: it takes a necessary game-mechanical component and clothes it in the metaphor behind the game. In general, the addition of a strong flavor element does two apparently contradictory things, both of which are good for the game:

It Opens Up Card Designs

In a very mechanical game, new mechanics often come from manipulating existing mechanics. The game branches out by combining and tweaking those already extant mechanical things to do. That is an okay way for a game to grow, and Magic has certainly done its share; mechanics such as cycling and kicker are generic and abstract mechanics that are largely just ways of manipulating abstract resources and moving cards around from zone to zone.

But when you clothe those zones in flavor, suddenly new mechanics occur to you that were not apparent from just tweaking the nonrepresentational card-manipulation mechanics. The flavor of the graveyard allows a door to creak open to new ways of thinking about those cards, ways that focus on particular types of card manipulations and might even be inelegant to express in the rules. The flavor of the graveyard, for its part, has given rise to abilities like unearth, recover, flashback, delve, soulshift, and more indirectly, to haunt, retrace, offering, and madness.

The flavor helps extend the designer's brain past what's simple or obvious to do within the rules. Sometimes it even forces rules text into strange contortions in order to fit the flavor intended. For example, haunt, the Orzhov guild's keyword ability in Guildpact, is not exactly easy to represent in rules terms (although its reminder text is much cleaner these days given the advent of "dies" and "exile"). But haunt's flavor of dead creatures haunting the living is nicely graspable, and it adds a cool, spectral angle to a guild led by a council of ghosts.

Innistrad takes this to its Vorthosian extreme. The Innistrad designers took the graveyard as their flavor inspiration and let that flavor lead them into the chilly, moonlit woods of 1790s European horror tales.

Strangely enough, while flavor can unlock new avenues of card designs and inspire block themes, it can simultaneously create constraints for the design of new cards. The macabre, coffiny flavor of the graveyard gives it a solid identity, which locks in what themes and mechanics make sense with it and what don't. This can make it tricky to design white cards in graveyard-matters sets, for example, when a more flavor-neutral term ("discard pile") might not rope off potential designs. 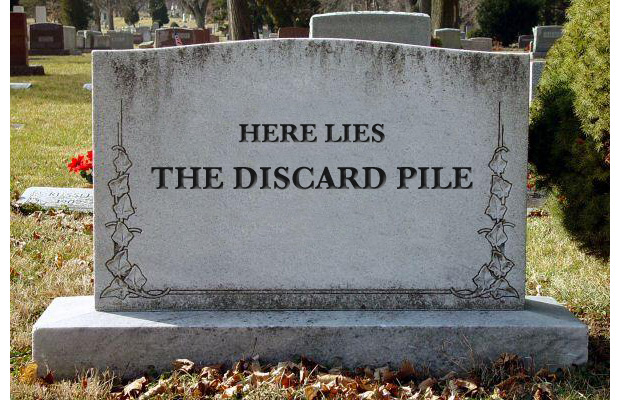 Ultimately this constraint-generation is a good thing, though. Thanks to the strong flavor identity of the graveyard, each of the five colors has its own distinct relationship to that zone, which prevents the colors from seeming too similar to each other.

Cards that don't fit these flavor-based constraints tend not to get made. But this differentiation helps define the colors and helps give Magic its depth.

But What Is the Graveyard?

We're starting to touch on the issue at hand: in flavor terms, what is this zone? Let me paste a handy letter from reader Fabio, which we'll call today's Letter of the Week:

Bonus question? OK, thanks! Having loyalty counters instead of toughness, shouldn't planeswalkers *not* end up in the graveyard?

Just like a living thing, spells have a life cycle. They pass from zone to zone as they live their way through their lifespan. Under normal circumstances, spells move from your library, to your hand, to the stack, to the battlefield, and eventually to the graveyard (and sometimes to exile). As you mention, Fabio, the flavor of the graveyard runs together two distinct ideas into one functional unit. If you'll allow me to quote myself briefly, from a 2008 article called "The Flavor of Zones" (which I wrote, incidentally, during a time when we were pondering changing some of our zone terminology over to "battlefield" and "exile"):

The graveyard is where creatures—and artifacts, and enchantments, and even one-shot spells like instants and sorceries—go to die. In some ways, the flavor of Magic regards the graveyard as a literal place where corpses take a dirt nap, interacting with the zone as if it were a literal cemetery littered with the bodies of chump blockers and Terror victims of bygone planeswalker exchanges. In other ways, the flavor of Magic regards the graveyard as a more conceptual past, a "place" where Memory Plunder or Sins of the Past can reignite forgotten magics, or the underworld of insanity whence Glimpse the Unthinkable sends your precious brain matter. In this way, the graveyard is no more a physical place than history is. Where does a brilliant double-play go after the inning is over? It doesn't go to any place. It happened, and now it's done, so it's in the past. The graveyard is the representation of that past.

I've found that these two types of flavor—the graveyard as literal bonepile and the graveyard as metaphysical "past"—encompass most of the graveyard-relevant cards you'll see in Magic, and explain most of the kinds of Vorthos scenarios we think of in our heads. You cast a Disentomb in order to raise and re-summon an Avacynian Priest who valiantly gave her life in battle? A straight-up case of literal graveyard flavor. You Recollect that Disentomb spell in order to cast it on something else? Now it's magic that is reaching into the past, recalling your ability to cast that Disentomb spell. 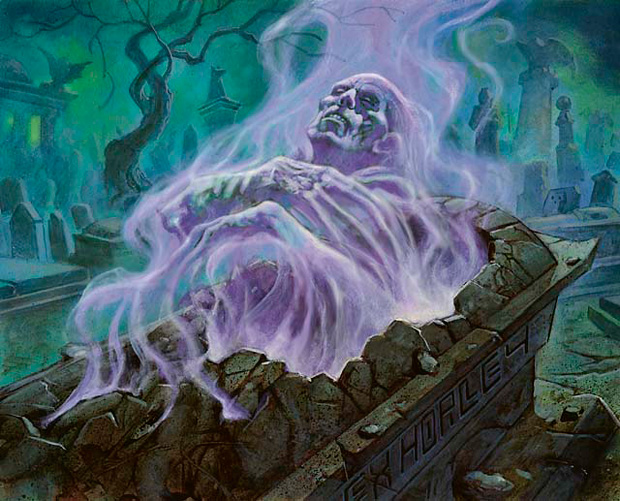 What about your bonus question, Fabio? What's the deal with planeswalker cards? In some ways, since they represent people who are unique in the Multiverse, planeswalker cards have the same flavor tension with the graveyard as legendary creature cards. When you kill them, why can you still have copies of them in your hand or library? When Garruk Wildspeaker and Ezuri, Renegade Leader are both in your graveyard and in your hand, are they dead or aren't they? If they died to an Incinerate or a Planar Cleansing, how is it possible to summon them again without getting out a shovel first? Flavorwise, my answer is generally that those cards in your hand, library, or graveyard are the spell that summon that creature or planeswalker. You can have multiple copies of the knowledge of how to summon them hanging around, but you can only summon one of them (actually put one of them onto the battlefield) at a time.

It's never going to be cut-and-dried, because frankly we as players hop between the two flavors of the graveyard as the situation suits. We talk about "killing your Garruk" while at the same time getting ready to cast our own. As the story guy I have vested interest in the idea that when Garruk is in your graveyard, that's a memory, not a body—Garruk has a lot of story work to do in the future, so I don't really want him killed off in hundreds of games of Standard! But as a player, when I send my horde of zombies over to attack your Garruk, I'm certainly intending to get him dead. We try to keep the difference clear by calling them loyalty counters instead of life points or whatever; the official story is more about planeswalkers zooming off to some other plane as soon as they run out of loyalty. But the pull of that more literal graveyard flavor is strong. 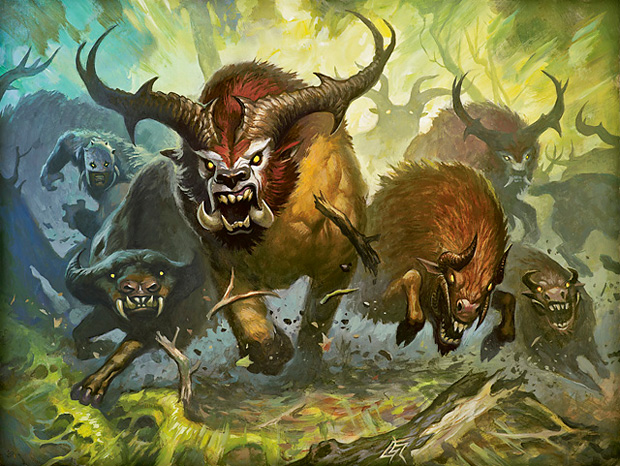 Maybe you're on to something, Fabio, about planeswalkers and the graveyard—maybe planeswalkers that are out of loyalty should go to exile, or get shuffled into your library, or something. I suspect the rules have them end up in the graveyard because that's where almost everything else goes. It's just easier bookkeeping to put everything in the same—well, yeah, I'll say it—discard pile.

Hope you enjoy the rest of Graveyard Week! Next week, if all goes according to plan, my colleague Adam Lee will be filling in to give you some more Postcards from Innistrad.