A Linguistic Look at Besieged

Just as you are what you devour, Magic cards are nourished by the words they contain, so it's always worth checking on the authenticity of the words therein. We checked in back in October with some of the odder words that make up Scars of Mirrodin. Now that the Prerelease is behind us and the Visual Spoiler is conveniently filled out, it's time to investigate the words and wordcraft contained in ye olde Mirrodin Besieged. 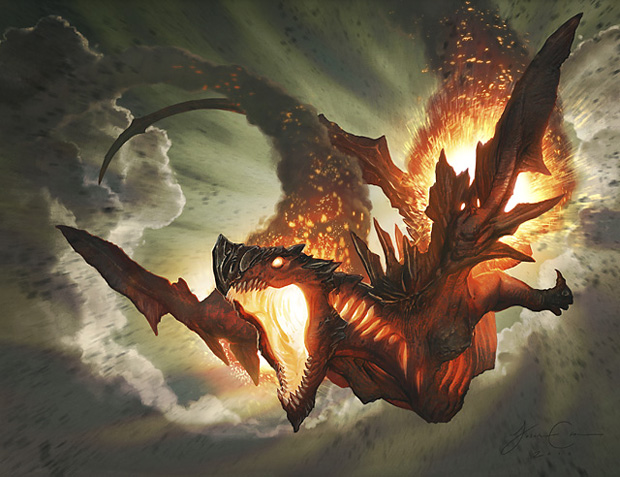 But this time, a twist! I will not didactically heave this lore upon you—no. Instead you'll get the chance to guess about each word's origins before I reveal the answer! We are gamers here, and we enjoy the gaming—and anyway I am not keeping score, and even if I were I would probably only judge you a little. Before we begin, though, let's have a refresher on the rules of Okra-Twinkie-Tofu.

I'll give you a word that's used somewhere on a Mirrodin Besieged card, either in a card name or in flavor text. You'll categorize each word we examine as either Okra, Twinkie, or Tofu. We define these terms as follows:

Okra words are words that are actually real but may seem fake, such as obscure and archaic English words or words borrowed from other languages.

Twinkie words are completely fake and not of this world—fantastic neologisms made up to fit a particular purpose in the setting.

Tofu words are made up of real stuff but may seem bizarre and alien, such as newly-created compound words or alterations of real words.

For each word, make your guess, then click for the answer. In that order, cheatybones! Let's begin.

So how did you do? Out of these twelve Mirrodin Besieged terms, how many did you categorize correctly? How many did you disagree with me on, cursing my name in rage with your fist shaking toward that dramatic ceiling camera? Well, life goes on.

Judging by my inbox, there's a whole lot of curiosity and speculation out there—you want to know who's winning this war between the Mirrans and the Phyrexians, how the internal organization of Phyrexia is structured, who the five central Praetors are, and what's up with Karn's fragmented, Phyrexia-influenced mind. All of those questions and more will be answered in good time. Many of them have to wait until the "Action" set is announced once and for all, as either Mirrodin Pure or New Phyrexia. But that is not known yet. For now I can tell you this: each of the five main Phyrexian Praetors is quoted in the flavor text of Mirrodin Besieged, but only four of them were quoted in Scars of Mirrodin flavor text.

Dear Doug Beyer,
Regarding your article "Phyrexia: The Strong and the Scattered":

We're witnessing the return of Phyrexia, but I haven't seen the Phyrexian mask on any of their cards. Has it been discarded as a symbol? (It would be a shame, it looked really cool)

To answer your question ambiguously, Phaseshifter, the mask isn't back, but it sort of is.

We take that mask to be more emblematic of Yawgmoth, Phyrexia's former leader, than of the whole Phyrexian civilization. So since Yawgmoth is no longer with us, the mask iconography hasn't shown up explicitly in Scars of Mirrodin block. The Phyrexian symbol, on the other hand, represents Phyrexia as a whole, and has shown up plenty: see the art of cards like Blight Mamba, Banishment Decree, Priests of Norn, and Horrifying Revelation—not to mention in the watermark of every Phyrexia-aligned card in the block.

But the mask of Yawgmoth design, with its ichor-streaked eyes and its hollow, wailing jaw, has made a subtler impact on the art of this block. Take a close look at the art of Viridian Emissary. See how its eyes are full of black fluid, and how the ichor runs down its cheeks? That's a common trait to a lot of Phyrexianized humanoids (also seen on Tel-Jilad Fallen as I mentioned in this article), and it's directly inspired by the look of the mask of Yawgmoth. A similar motif played out in the art of the Phyrexia-scarred Time Spiral block. And check out Karn in his Phyrexian throne in the art of Corrupted Conscience—the big silver golem was already kind of grimly mask-faced, but now his darkened eyes and gloomy countenance are more reminiscent of that mask of the previous Father of Machines. 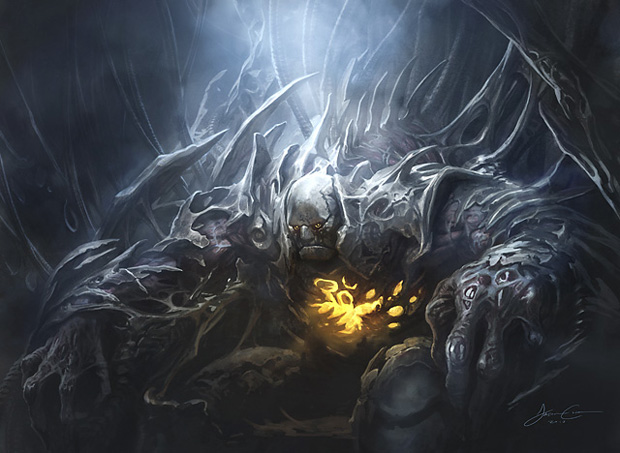 Hope you all had your-chosen-enemy-smashing good times at the Prerelease. Next week we crash headlong into BATTLE. 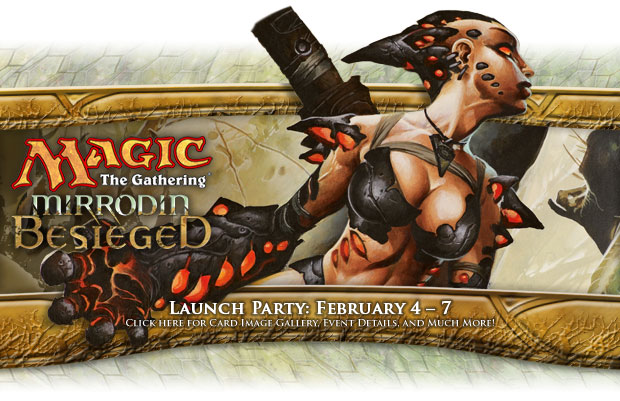