fortnight ago, we were nibbling on the freshly-baked batch of cards from the Magic 2012 Core Set, and I was opening up my recipe box to tell you the tales of what went into each one. Today we complete our review of this year's core set from the point of view of a flavor-obsessed M12 designer .

Did you know that Sorin has a sword? You can see it in the original art of his planeswalker card. It's an ornate longsword that hangs at his side. How exactly is that fair? He's a vampire who's untold thousands of years old—old enough to have seen the Eldrazi rise and threaten Zendikar the first time out. He's a blood-sucker without peer. And yet he has a sword? Sorin's Vengeance depicts him ramming said blade into the heart of a victim—a would-be swordsperson himself—and causing the victim's blood to flow up the blade and into his own body.

The art of Sorin's Vengeance is a good close-up of Sorin's eyes; note that unlike many vampires, Sorin has light-colored pupils and black scleras (the sclera is the outer covering of the eye, often called the "white" of the eye, except Sorin's are black). It's an easy detail for our artists to miss, so every time Sorin gets illustrated, we have to do a "sclera check" when the art comes in. "Sclera check"? Sounds like a police detective on a hard-boiled cop show. "Where is Sclera check? I'll have his badge, that no-good Sclera check! Sclera check—your ass, my office, NOW!" In other news: sclera check.

Speaking of bloodsuckers, this aristocratic vampire warlord commands a legion of other vampiric thralls in a benighted land known as Vaasgoth. Vaasgoth is a region, not a plane—it's one of those locations, like the kingdom of Thune or the uncivilized forests of Kalonia, that is presumed to lie somewhere on one of the infinite planes of the Multiverse. It may turn out that more than one of these far-flung core set locations happen to occur on the same world—that's yet to be seen.

In the meantime, take my advice: don't stay the night in Vaasgoth. Your horses can rest in the morning. If you value and enjoy the way your blood stays inside your own veins on a typical evening, just keep going until you leave the borders of Vaasgoth. That's all I'm saying.

Goblins loves rocks. Rocks heavy. Rocks dent skull. Rocks renewable resource. Not have arrow? Not have crossbow bolt? Not have problem. Rocks plentiful. Bend down, get weapon. Easy. What better than rocks? Nothing. You think so. But get ready to blow mind. Rock on fire. Yes. Put in sling. Hit head with fire rock. Crunch skull and burn face. Effective. Get blood on ground. Ogre smell, get hungry. But careful. Sometimes fire rock hit self. Fate fickle mistress. Sometimes fire rock burn other goblin, too. Kind of funny. But don't do too much. Aim at human. Hit skull. Win battle. Rock not good. Rock best.

The Minotaur creature type is part of a personal crusade of mine—call it the "3/3 zone."

But Hill Giant and War Mammoth are from another era of Magic, back when truly huge creatures (5/5s and 4/7s and 8/6s and on up) were few and far between, and many of the largest creatures were given debilitating drawbacks because they were seen as terribly overpowered. Nowadays very large creatures are a more commonplace part of Magic (which I personally find excellent). But that creates a creative issue. To me, the greater numbers of huge critters means that the Hill Giant precedent has become problematic. I still don't want human beings to be 3/3 or bigger (unless they're legends, and certainly you can find some other exceptions). But starting giants at 3/3 just doesn't leave enough room for large-but-not-super-huge creatures. To me, giant-sized creatures, creatures that can stomp you flat underneath their man-sized feet, should be up in the 4/4 and up zone. Magic's 5/5s and 8/8s and 11/11s should be our creatures that are known for their neck-craning size—not 3/3s.

That leaves us with the 3/3 zone. What excites me about putting some space between giant-sized creatures and humanoid-sized creatures is that we get a zone right around 3/3 or 3/4 that is a great spot for large humanoids—fantasy races that are known to be big and tough, but not realm-striding giants. Loxodon Hierarch. Barrage Ogre. Rhox War Monk. Cudgel Troll.

And Gorehorn Minotaurs. This middle tier of creature size is still somewhat loose—especially with the variable sizes of bloodthirst creatures muddling the message, and with plenty of counterexamples throughout Magic's history—but I strive to carve out this medium-size 3/3-ish zone for the benefit of those large-but-not-huge critters. Hill Giant? Meet Canyon Minotaur.

All colors have their own particular strengths, but green's main strength is STRENGTH. It is not about countering your spells. It is not about death magic that rots away your minions. It's about being bigger than you. I want core set players to see how green can be clever, but to me green should be clever by being HUGE. Green's cleverness should be about being the mage who has the monstrous creatures and for piling on the Monstrous Growths. Hunter's Insight is that style of card. It takes green's mighty hugeness and turns it into delicious cards. The bigger your monster, the more the cards. That's my kind of card-drawing spell. (Pro tip: Cast it on Crumbling Colossus. You'll think you had a golem made of Christmas.)

Skinshifter is a form of beastmaster, a nature mage who can alter his appearance and become one of the living creatures belonging to the forest he reveres. He's a kind of wild-man who can become a wild beast. We played with various creature types and power/toughness combinations—this one felt like a pleasing range of options. Creature types are a powerful means of delivering flavor, and when a card can get multiple creature types into its text box, it can tell quite a pleasing story. 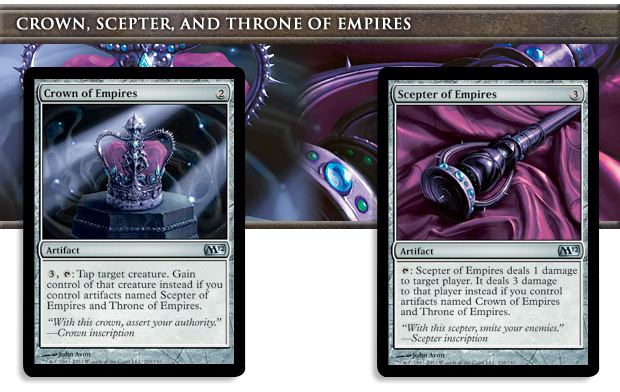 M12 lead designer Mark Globus was looking for "multiple-card tropes" for the set, by which he meant connected ideas from fantasy stories, something with multiple elements that could be split across more than one card. White Knight and Black Knight, the classic "good knight vs. evil knight," are a multi-card trope in this sense—they're two sworn enemies who, despite never actually fighting their epic duel, forever conjure up this familiar feel of linked opposites. Griffin Rider from M12 is another idea like this—two elements (rider and mount) that are linked in both flavor and mechanics. The Empires artifacts followed in this same trend, a set of artifacts spread across three cards. It's flavorful that these icons of authority would give you autocratic abilities, but you get to feel even more flavor when all three are assembled and you have the full powers of the emperor. 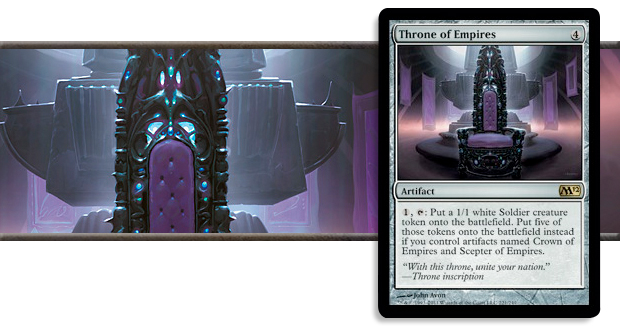 This is a card that has been submitted for multiple sets. I'm happy it found a home in M12, giving a "lord" to all of those creature types that haven't had a creature to lead them into battle. I'm excited to hear what nutty tribes you build decks around thanks to this universal soldier. We asked artist Igor Kieryluk to paint a humanoid construct that had seams and interlocking pieces, suggesting that it could rearrange its metallic plates to take another form and become the leader of some other race or creature type. Its eyes, nose, and mouth are all on different moving pieces—I just dig that. It's the Mr. Potato Head of magically animated military constructs. #sentencesthathaveneverbeensaidbefore

I had always wanted a card to emulate a "bag of tricks," where you get some random trinket every time you go rooting around in it. But interestingly, the rules of Magic have precious few methods that can generate a random-ish result. The rules allow a player to flip a coin, such as on cards like Goblin Bangchuckers. Some cards call for rolling a die, but so far that's been restricted to silver-bordered Un- sets—at this point we don't actually require any dice to play with any tournament-legal cards. (Although many people use d20s or other dice to track life totals, to determine who goes first, or to keep track of counters, those things can all be done without dice.)

But there's another way to randomize a result, and it's built into a card game such as Magic. It's to use the shuffled deck of cards that's sitting right there in front of you. Flip up the top card and use some property about it (in this case, its card type), and you can create a surprise result. Druidic Satchel is designed more in the vein of Coiling Oracle or Augury Adept than Lurking Predators or Sorcerer's Strongbox, in that it always generates something positive, but which reward you get is a surprise. Of course, with some clever deckbuilding or effects that manipulate the top card of your library, you can control what you pull from the Druidic Satchel and get exactly the trick you want. Otherwise, it's just fun to reach in and see what you get.

We like it when sets have nonbasic lands that do interesting little utility tricks beyond just supplying mana. Plus there's tremendous flavor in lands—we could easily design a handful of new lands in every core set and not run out of fantasy-resonant locations worth showcasing. So we set out to try some new land designs. Development thought it was important to keep M10's Glacial Fortress cycle around for Standard's sake, so we only had room to add Buried Ruin. Buried Ruin is an archaeological dig site that takes a little digging to reveal its treasures—a kind of bridge between the flavor of Zendikar and the artifact-laden mechanical identity of Mirrodin.

How does the Creative team work, and how much influence do you have over the card-designing-process?

Do you go over each card in a new set and find creative flaws, or are you completely indifferent to what the card actually does and only write art descriptions and come up with names? Do you fight with the design teams over how mechanics work, or do you not?

Thank you for your answer
-- Isak W.

No, thank you, Isak. This question is a huge one, and I could spend many articles going through Creative's role in the card creation process. But let me give you the gist.

The answer is: it depends. For most sets, Creative gets involved at many points along the process. We get involved when the ideas for the new block is just being pitched, long before any cards have been designed; lead designers discuss their plans with us, we yay or nay certain parts of the idea, and we contribute thoughts about where else those setting or story ideas could lead. We also get involved when the cards are most-of-the-way designed and playtested, and yes, we come up with art descriptions during the concepting process to get the cards illustrated. But there are occasions where we step in during the design of the cards, especially for sets like M12. Here are some of the scenarios where we get involved in the card-by-card decisions:

Thanks for the question, Isak. Catch you all next week.