his time on Milk & Cookies we have a special treat: not one Magic artist, but TWO. Today we're joined by the fabulous Deutschland Duo, Jana Schirmer & Johannes Voss.

Jana and Johannes are fairly new to Magic, with just five cards in released sets, but they've done another seventeen in upcoming ones (including the just-announced New Phyrexia). They work as a team, much like Batman and Robin... except they both get to be Batman, because both have great talents (I don't want to start a fight between them about who gets to be Batman, either).

Now, with the brief introduction out of the way, let's start the interrogation, shall we?

How long have you two been working together?

Magic is the first job we worked on together, but we've been collaborating for years! We met at a book fair in 2008 and since we're both interested in pretty much the same stuff, we started hanging out. It's great—we are not just a team, but also close friends. We did a lot of paintings together without even thinking about doing it professionally, just because it was fun to develop ideas and merge styles. Then after a while we started looking for jobs because sushi and ice cream needs to be paid for. Since painting together is so enjoyable, collaborating on the job seemed like the obvious choice. 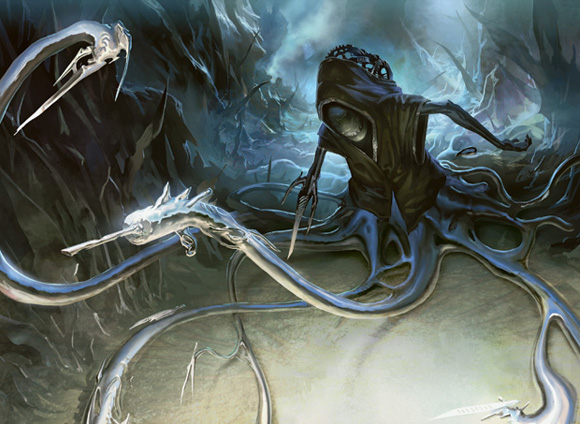 We both come from an anime and manga influenced background, and both used to play videogames as kids—and Magic! :D That's the kind of stuff that really stays with you all your life and shapes your interest. Illustration is an awesome field because you get to tell stories and do design and play with color and poses—all in a single painting. You get to show worlds and people that are similar to our reality and at the same time very different. 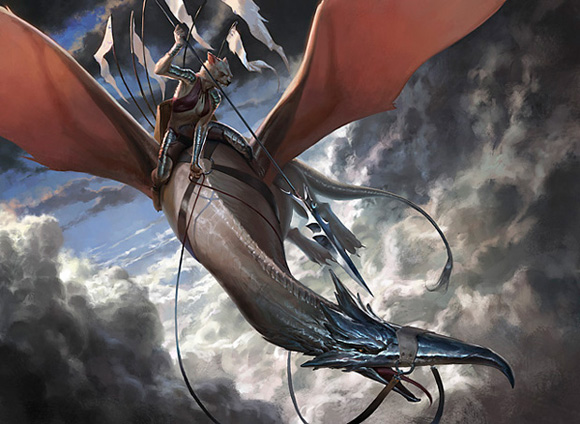 How long have you been working as fantasy artists?

Jana's been professional for years already, but for Hannes Magic was actually the first job.

So Johannes, does this mean Jana is Batman and you are Robin? (OK, I shouldn't have said that—now you'll argue).

Ahaha, well, from the height, Jana would be Robin. But your argument is reasonable too, so maybe Hannes is Robin. So maybe we're both Robin. No Batman. 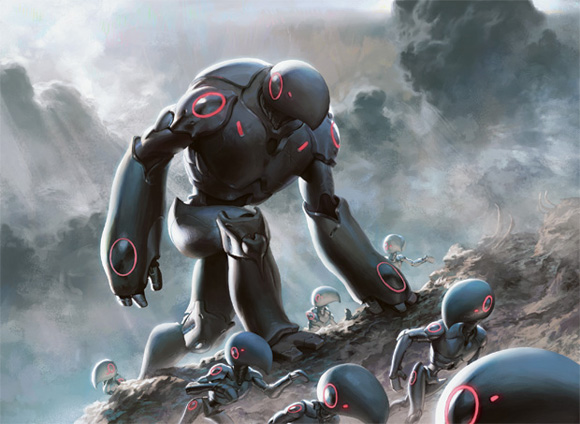 Who are you artistic influences?

There are a lot of artists we admire, from all eras and fields. We both like wildly different artists, but our common favorite by far is Craig Mullins. No doubt about that—he's a living legend! We love his Magic illustrations and at one point we went into a comic store to dig through the heaps of loose cards to find Craig Mullins cards and buy them just for the paintings. 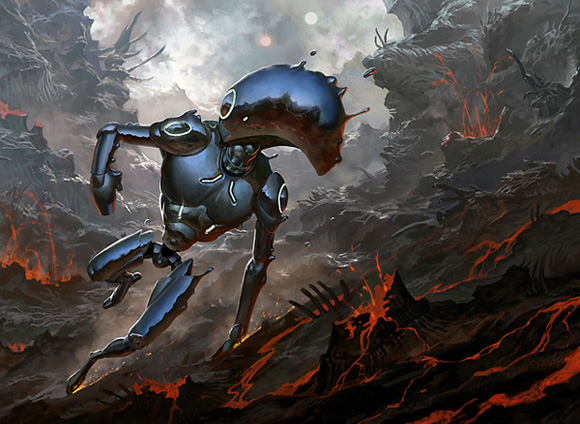 We have been working on Magic since Scars of Mirrodin. That was pretty cool because Hannes had been playing back in school when the first Mirrodin block came out, and with Mirrodin being his first job, it was like a return to an already known world. That was nice extra motivation! 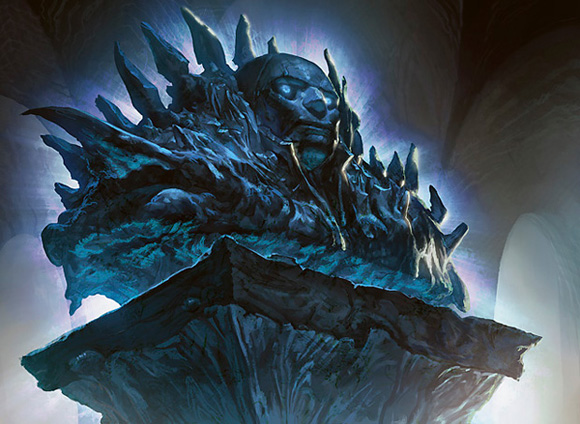 Chrome Steed, or "Chrome Custodian" as it was called in the art description, and Throne of Geth. Both are cards that we really like to use when playing nowadays. It's always so much fun to kill off an opponent with a card you have illustrated yourself! *evil smile* 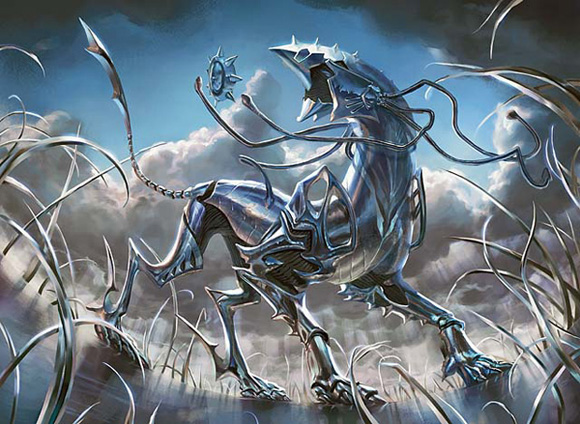 Not at all, actually! We'd been friends with David Rapoza long before any of us had worked for Wizards, and then he had started doing stuff for D&D and Magic and just gave us the email address of Jon Schindehette, who's the senior art director on D&D. So we just sent a mail with some of our pictures, expecting to maybe get the chance to work on D&D, but instead he forwarded us to Jeremy Jarvis! That was fantastic. Then it only took a couple of emails for the contracts and bam, the next day we were working on our first two cards!

Ah yes, Jon Schindehette, my old bodyguard. Sounds like he saw your potential right out of the gates. That must have been exciting!

Well, we did have to hit him over the head a couple of times, but after that they were all quite nice to us. Outnumbering your enemy is always an advantage! 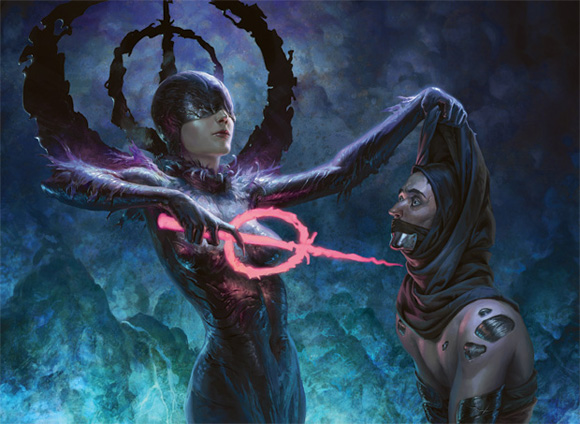 Well, there's a couple that we really like that haven't been released so far, and of course the new stuff tends to get better because, since each illustration is a new challenge, you always learn a lot! Of the ones that are out already, Sheoldred is probably the one we like most. We're happy with the result because it works even though it's fairly simple; it doesn't even really have a background and puts all the focus on the character.

There's nothing quite like illustrating the big nasty ones, huh?

Yeah, but the downside is that you never get them in the boosters! 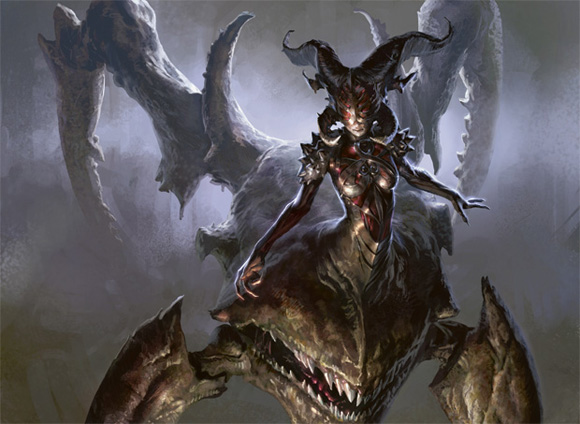 I hope you all enjoyed it!