Monument to a Lost Age

ebbles tend to roll the wrong way around here. It's how you know you're getting close. There's an anticipation in the air, an electric sense of dread in your stomach, and absolutely no sound except for the muffled coursing of blood through the veins of your ears, and those pebbles grinding and crawling their way up the jagged granite slopes of Akoum. 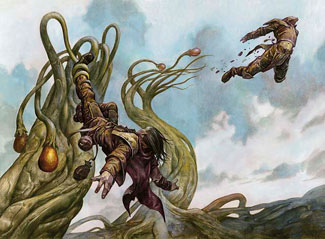 The stones don't move fast, nor consistently. The gravitic shift is rarely so pronounced that you feel your pack dragged upward into the air, nice as that would be in the middle of a long expedition into the Teeth of Akoum—and besides, by the time you'd adjust to the sensation and mark its location in your dad's old journal, the Roil would sweep across the landscape and invalidate everything you wrote. Still, you've seen drakes snagged in the centers of gravitational traps, flapping their scaly wings in a futile attempt to drag themselves out of some invisible, midair vortex of forces, looking like flies stuck fast to an unseen spider's web. And you've seen the sea rise and twist in ways the tides could never account for, and you've seen sky-high trees whose woody roots arced around giant spheres that weren't there, and you've seen a man die.

The sounds change now: the leathery stretch of your ropes. Your climbing partner is on the move somewhere above you, pulling at the ropes, stretching them taut against the granite shelf that lies between you and him. He must have found a way forward, a way up, a way closer to the array of ancient, floating stone cubes that hide your true goal.

You yank on the rope to signal your partner, but the line stays tight—no answering tug. A breeze picks up suddenly; the kor might call it the "caress of Kamsa," the wind goddess that the merfolk call Emeria—but that's not your style. You're concerned the change in weather might be due to an oncoming gravity shift, or a churn of the Roil about to strike the area.

Zendikar is full of forgotten ruins, centuries-unplumbed catacombs, and timelost artifacts—but it's no archaeologist's playground. The land protects itself, if you believe in that kind of thing. To your mind, there's nothing conscious about it—although danger abounds, nothing goes on that couldn't be dismissed as accidents and random acts of nature, unless you believe the nomad's tales and bard's songs. It's just a dangerous world, just like your father said.

But when you feel that anticipation in the air, and the lightning storm in your belly, and you think about years ago, when you saw him slip quietly over the edge into a mile of nothingness—

"Come on up!" It's your climbing partner, calling down to you. Finally. "The stone is too hard to spike here, but I've tied us off on a, uh, a thing. Come up, you're definitely going to want to see this."

In a matter of a few hundred feet of elevation, through a blanket of fog, the landscape has changed completely. The sharp granite shelves of Akoum have given way to a bizarre grid of huge, floating, cubical stone slabs, large enough to stand and climb on. They hang in the air, rigid as rock, inscrutable carvings tumbled across on their surface like a frozen moment from a madman's dreams. Pebbles float by impertinently, drifting on the breeze.

This is it. This is what you and your father were trying to find. You've made it. You're standing on the largest field of floating ruins in Akoum, perhaps in all of Zendikar. The carved blocks extend as far as the eye can see, converging at the horizon like the rows of some eldritch crop. Your blood pumps, your fists clench, and you allow yourself a shout of triumph. You feel more alive than you've ever felt, as if you could take on anything this world could throw at you.

"What's that thing?" asks your climbing partner after a time. You follow his gaze.

You almost drop your journal into the emptiness below. That—that wasn't on the maps. You'd better climb over there to get a closer look, you tell him. 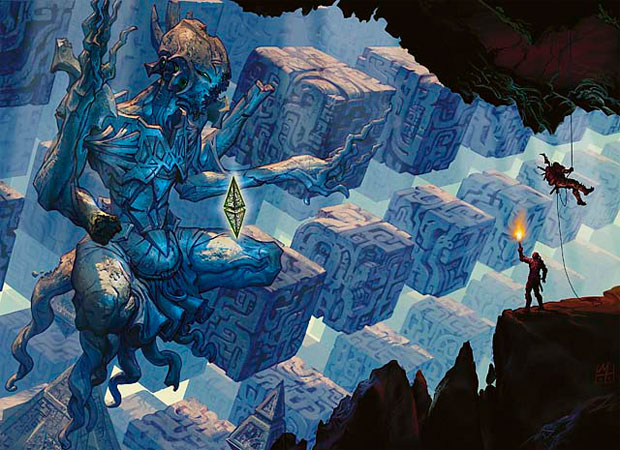 Today we take a look at a strange and powerful artifact, one of those priceless treasures guarded by Zendikar's deadly perils. It's designed to work with creatures, and yet is totally unfriendly to them as well. Not everything comes easy on Zendikar—prices must be paid. 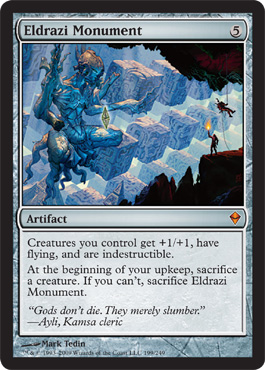 Zendikar is subtle at times, full of secrets and mysteries. You know, mysteries like "How did I just win?" Just stare at that thing for a while. Imagine some scenarios.

The mere presence of this strange statue makes your creatures into near-perfect beings, incomparable fighters and defenders, an unstoppable force. But the statue exacts an infernal price. If it's going to stick around, it needs to feed.

Odd—you're flooded with power, yet the guy next to you keels over? Um ... hmm. Unsettling.

The care and feeding of your Eldrazi Monument is easy. Option one: don't worry about the upkeep; just cast it when you've got a nice, sizeable army of monsters, and attack for a lot. Don't worry about them—they'll be fine. They'll fly over most of your opponent's defenses, and they'll be indestructible in case any actual battle does occur. If you time it right, your opponent should be dead before you even need to read that upkeep line. Shiny.

But say you want to keep that Monument around for a while, even permanently. Option two is to build around the sacrifice. Think back to every time you've thrown a Breeding Pit at Lord of the Pit or an Ant Queen at Xathrid Demon. Eldrazi Monument has a similar style, and better—it will make your sacrificial lambs nice and powered-up in the meantime. Planeswalkers such as Elspeth, Knight-Errant, Garruk Wildspeaker, or Nissa Revane (oooh) can provide a steady stream of creatures, as can Mycoloth, Rakka Mar, or even Puppet Conjurer. Use creatures with unearth to get a double bang out of your sacrificed creatures, or use creatures that enjoy death, such as Sprouting Thrinax, Hissing Iguanar, Worldheart Phoenix, or Mycoid Shepherd. With a little cleverness, you can keep your Eldrazi Monument nice and well fed, yet keep it around for long enough to win even an hours-long multiplayer game.

There are other options, too. Use Nature's Spiral or Sanctum Gargoyle to return a lost Monument back from the dead. Use Sharuum the Hegemon or Open the Vaults to pop that sucker right back onto the battlefield, ready to stage your next attack, possibly alongside an artifact creature army. And you can always just toss your smallest fighter at the Monument, allowing two huge attacks for the price of one measly utility dude.

Of course, it would have been a flying, indestructible utility dude. But sometimes you've got to pay the price.

The statue is ancient, cracked, and missing a few key features. It's not of any race or creature you've ever seen—just the inventive visions of some primeval, probably mad, sculptor. It's not unlike a few others you've seen sketched in tattered travel diaries, so it's far from unique—but you're convinced it's the most important thing you've ever seen.

The wind and gravity are strong up here, both whipping at your travel gear—a goddess's caress or no, you definitely feel the presence of forces you should not be toying with. You wonder what your father would have said today. You should probably head out.

You turn to your climbing partner. Irrationally, he's unclipping his safety line. Before you can say anything, you watch him step off the edge of the stone ruin, his eyes turned to you in that last moment, sad and strangely lucid, almost communicating an apology as he slips soundlessly into oblivion.

Justin brings up an important point about planeswalking and Zendikar.

Given how absurdly perilous it is to traverse Zendikar, let alone explore it, why don't planeswalkers use inter-planar travel to reach their destinations on the plane instead?

Say you're a planeswalker, and there's a treasure you simply must have on Zendikar. You know where it is, and you know the expedition is suicide.

Suppose you know about a plane adjacent to Zendikar called Roadsnica. Why wouldn't you planeswalk back and forth to Roadsnica to find a relationship between where you end up on plane B when you planeswalk from point P on plane A, and vice versa? Understanding such a thing would be invaluable in your quest to loot Zendikar. Furthermore, you could sell your services to other planeswalkers seeking Zendikar's treasures for a large price.

If you're willing to bet your expiration date on this treasure in an expedition, surely you'd be willing to take a few days, months, or years' study to train your planeswalking abilities and your knowledge of multiversal adjacencies instead. It seemed from the webcomics that Garruk was good enough at planeswalking to specific locations that he could meet Jace on Ravnica at will. Has no Planeswalker before attempted to map out Zendikar in this fashion? If so, why not?
--Justin 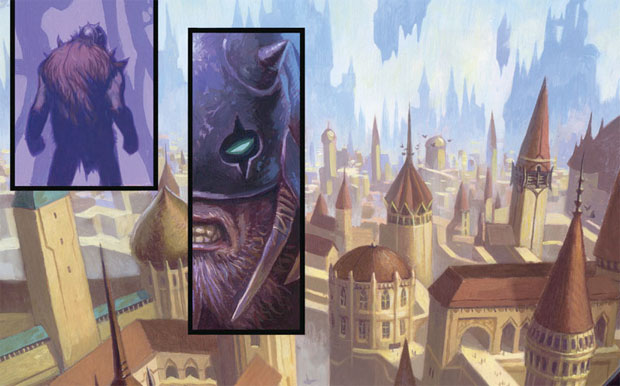 It's a clever plan, Justin, but unfortunately, it's just not that easy. The Blind Eternities are not a modern superhighway, allowing easy and consistent access to and fro from plane to plane and location to location. Some planeswalkers have developed an intimate enough relationship with certain planes that they can reliably show up in certain areas without too much fear of being mislaid, but in most cases, there is risk. Every planeswalk is an adventure, an expedition in itself through the very fibers of reality, and it takes huge effort and power to push through the chaotic void at all, let alone end up sitting comfortably on a pile of dragon's gold on your destination plane. (Note that Garruk was able to planeswalk to Ravnica, but still had to smash his way through guards and wards to get to Jace's chamber.) Furthermore, Zendikar in particular seems to have it out for explorers of all kinds, including planeswalkers. It may be even harder to pinpoint locations here than other places, leading many planeswalkers to arrive in Zendikar's few huddled outposts of humanoid civilization rather than the ruins-draped wilderness.

The most important point might be that a force called the Roil, which we'll hear more about as we go along, changes Zendikar constantly. Heraclitus once said that you can never step in the same river twice—the river's waters and borders change, so the river is not the same when you step into it again. Similarly, you can never visit the same Zendikar twice. The older your map, the wronger it is.