ho doesn't love a myr? So wholesome! So huggable in their single-minded, autonomous devotion to duty! So what if they were creations of Memnarch, the control-freakish former overseer of Mirrodin who went mad and tried to Leveler everybody. That's not the myr's fault! They're little metal automatons who carry out tasks. You summon them and they do what they're told. 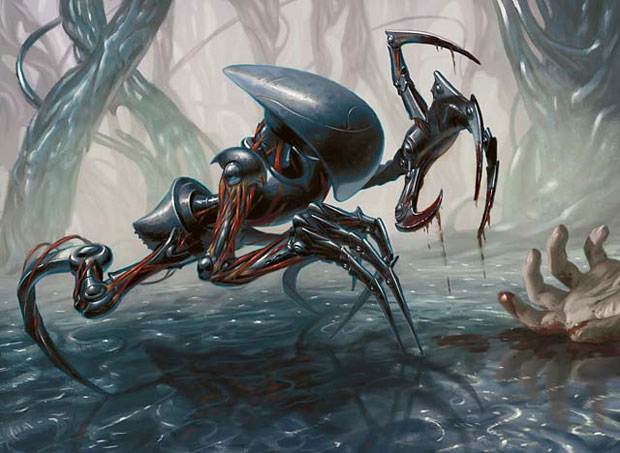 Okay, fine. Maybe not all of them are so wholesome. The Phyrexians have taken and altered some of the myr. Sinew grafts. Implanted ichor reservoirs. A decidedly anti-Mirran tilt to their priority matrix.

(That's Phyrexia for you—unsportsmanlike. Like the kind of unsportsmanlike where you find new phalanges grafted onto you, and you're gnawing on chunks of your former allies. Uncouth!)

But most of the myr are dedicated Myr Servitor. Since the defeat of Memnarch, they have gained new purposes, devoting their metallic little lives to doing what needs doing. That's the essence of being a myr: doing the duty it was built for.

Some of them channel mana from the lands and suns of Mirrodin.

Some of them rouse and empower their fellow myr. 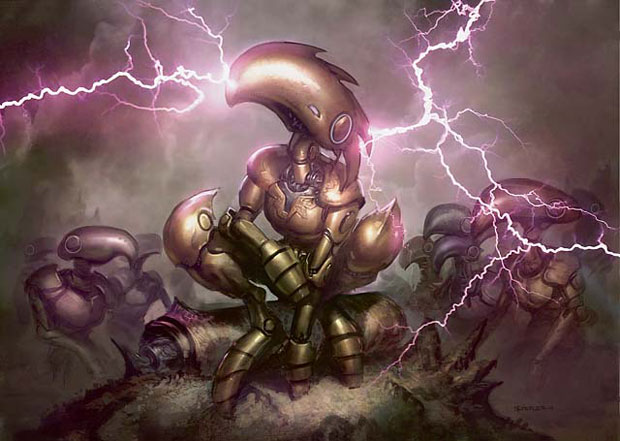 Some of them ball up into mighty BATTLESPHERES. 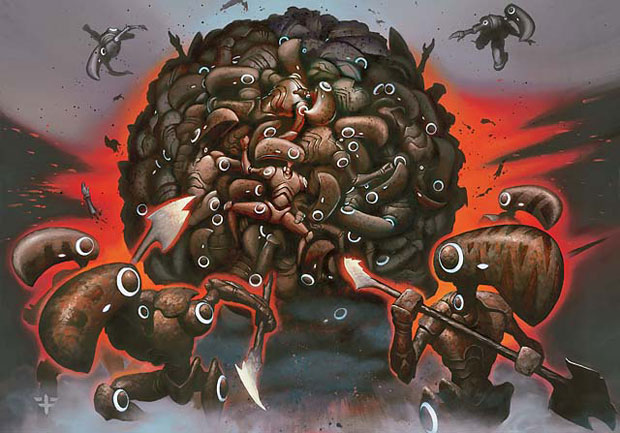 (Note: If you ever had a problem demonstrating your wholesomeness, just show your detractors your Myr Battlesphere deck. They shall be summarily convinced. No one can be unwholesome who has a deck involving Myr Battlesphere. It's a rule.)

Sometimes myr also blow up, spreading deadly sprays of necrogen everywhere. Again, this one might point the needle somewhere in the not-so-wholesome zone. And again, blame the Phyrexians for this particular death piñata. 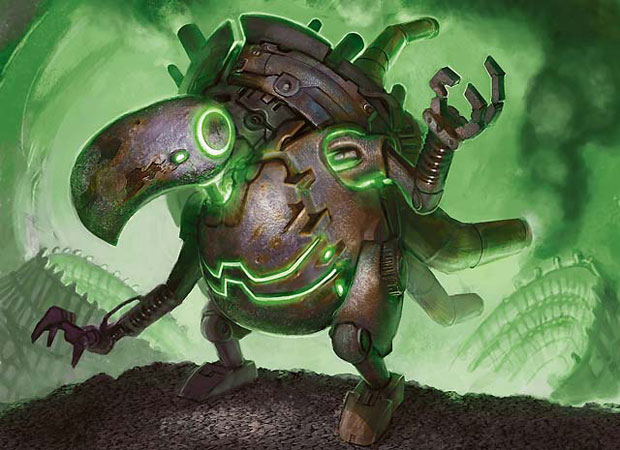 But the myr are mostly pleasant. I promise. They vary in appearance just as they do in function, but they tend to have that characteristic myr head shape, that swooping "beak," jointed limbs, and smooth metallic complexion. It's the trademark design of modest Mirran industriousness.

The first Mirrodin block provided a rich variety of myr designs. But that wasn't enough for our purposes in this new block. We wanted an even Richard variety—that is, a variety of designs conjured up by our concept illustrator Richard Whitters. 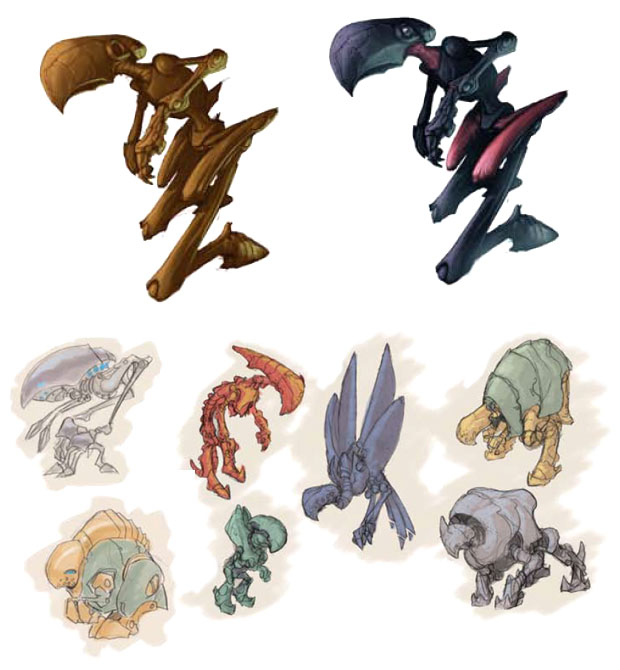 The myr are like quicksilver: malleable in function and adaptable in form. – Silver Myr

What the myr are missing in Scars of Mirrodin is a home base. A safehouse. A factory. A ... cemetery? 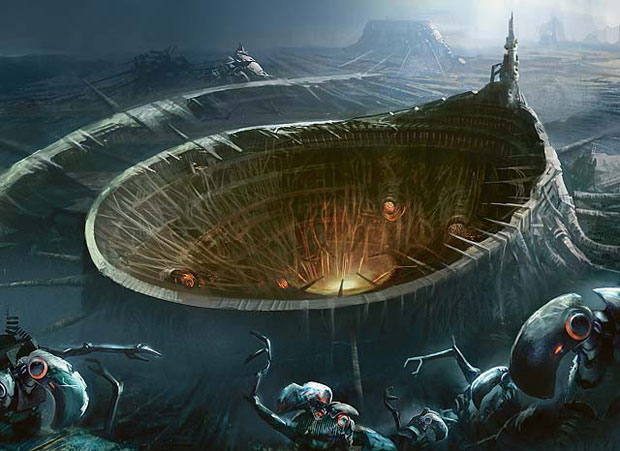 These "myr reservoirs" appear all across the metal surface of Mirrodin. Each reservoir looks like an artificial crater, its high walls flared up around a metallic opening that leads down into the depths of the plane. The aperture provides occasional flares of mana, not unlike the five huge lacunae from which the five mana-suns emerged. Unlike the lacunae, though, the mana is distinctly myr-oriented, flavored with the tang of metal. Their ebbing mana-flows are naturally suited to the creation of myr-like designs.

Each reservoir is surrounded with a kind of accretion disk of defunct myr husks. Although the reservoir doesn't itself bring new myr into the world, it is fertile with the raw materials for the construction of myr, and is often used by artificers and industrious myr alike to build myr legions.

Myr Reservoir obviously belongs in a deck that can take advantage of the Myr creature type, and the Scars of Mirrodin block has plenty of goodies for such a creation. Darksteel had Myr Matrix, but besides that, the previous Mirrodin block didn't offer much else to reward you for building the dedicated Myr deck. Myr Reservoir is the first gear in a new machine involving these wholesome artifact creatures. It helps the industrious little tribe-that-could in two ways—it helps you build critical mass of Myr fast, and then it helps you rebuild your army when they run into removal or deadly blockers. 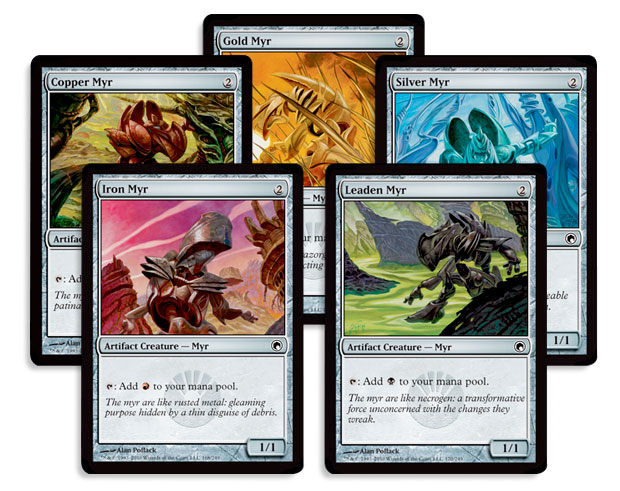 Myr Reservoir's mana-generation is the first side of the coin. It becomes a powerful turn-three play for the Myr deck, as you can drop a mana-Myr (such as Leaden Myr) turn two, then go Myr Reservoir, tap it for another mana-Myr (such as Copper Myr) the next turn. The Myr deck builds mana fast, blossoming out into an artifact army in no time. The Reservoir can even accelerate you to more expensive Myr creatures, such as the noble Myr Battlesphere. 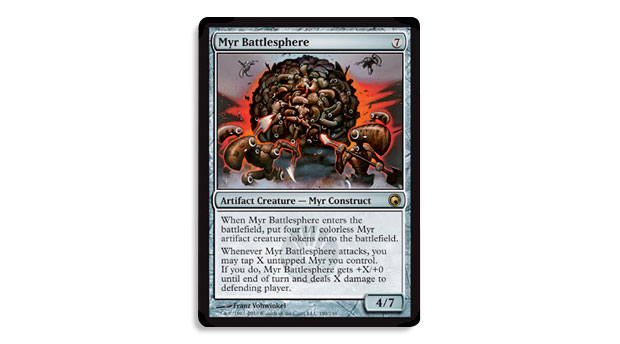 Once your metallic army is in force, slam down a Myr Galvanizer and put your Myr into attack mode, swarming over for gobs of hurt. Some of your Myr may die in the exchange, but hey, their defunct bodies will soon find their way to the Reservoir.

The other side of the coin kicks in—Myr Reservoir's second ability. Use your boatload of mana (possibly aided by your surviving Myr and Myr Galvanizer's mass-untapping ability) to use Myr Reservoir to Disentomb your best Myr and recast them. You'll have an unkillable cycle of Myr continually returning to the battlefield, continually walloping your opponent (and, I'm told by some Mirrans, continually humming a wholesome, cheerful tune).

There's another Myr creature in Scars of Mirrodin that can help you crank out a hefty Myr swarm, but it hasn't been previewed yet. I'll just say this: it has a bit of mana in its activation cost, and it can be a little fragile. Just note that Myr Reservoir helps with both those things.

(If today is Wednesday, September 15th, 2010, then check out another Myr preview on Tom LaPille's Twitter feed sometime today!) 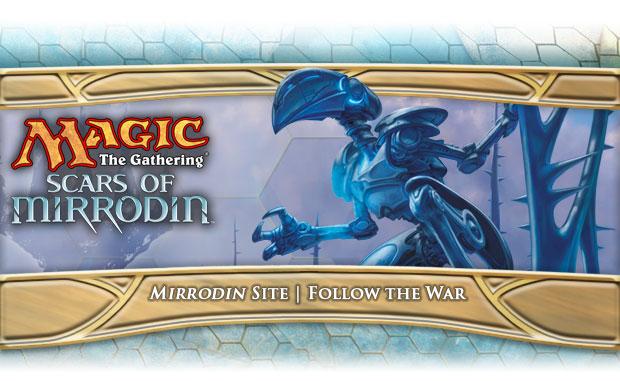 If you haven't checked it out yet, be sure to go explore Mirrodin for clues about the upcoming set. Scour the five environments of Mirrodin—the Razor Fields, the Quicksilver Sea, the Mephidross, the Oxidda Chain, and the Tangle. Discover downloadables, such as art, desktop wallpapers and profile pics. Read snippets of flavor text, card names, character narratives, the Orb of Insight, and preview cards from Scars of Mirrodin. This site updates several times a week, so keep checking back periodically for more of the inside scoop from the metal world.

I was wondering if you could answer a question or three for me about the five suns of Mirrodin.

From the art available in both the previous block and the new set, it is apparent that the suns move about the plane of Mirrodin and can be seen in various configurations at any given time.

As someone very interested in cosmology I began thinking about how these suns interact with each other and the plane itself. I realise that the multiverse has different rules to ours, but it would seem that some of the same basic scientific principles apply.

1. Do the suns exert gravitational influence over each other and the plane?

2. Could the suns ever collide? Are their orbits equipotential?

3. Do the suns ever set and rise? Is it ever night somewhere on the plane?

Great questions, Levi. Let me see if I can answer them.

The first thing to point out is that while Mirrodin is a spherical world, Mirrodin's suns are not stars. They are enormous orbs of mana, not balls of space plasma. As celestial objects go, they obey rules of magic rather than the physics we understand.

For example, no, the mana suns don't exert gravitation. They don't cause tides in the Quicksilver Sea (a sea full of a unique liquid metal—not actually mercury), and if they alter each other's orbits at all, it's not because of gravity. There may be some kind of attractive or relational force that binds the suns to Mirrodin, but that's a matter for the thaumaturgical theorists. 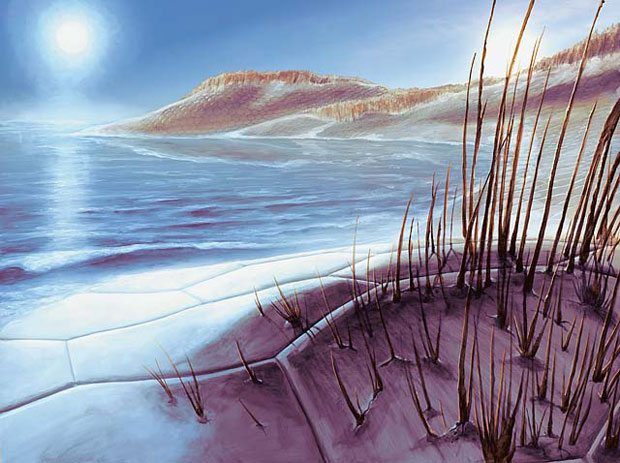 Mirrodin's suns do have orbits, however, or at least they have motion behavior that you could compare to orbiting. They move through Mirrodin's sky like our sun does through ours, or like the suns might relative to a planet in a multiple star system. (I'm not sure if an Earth-like planet is even possible in such a star system, but remember, we're in magical territory here anyway.) 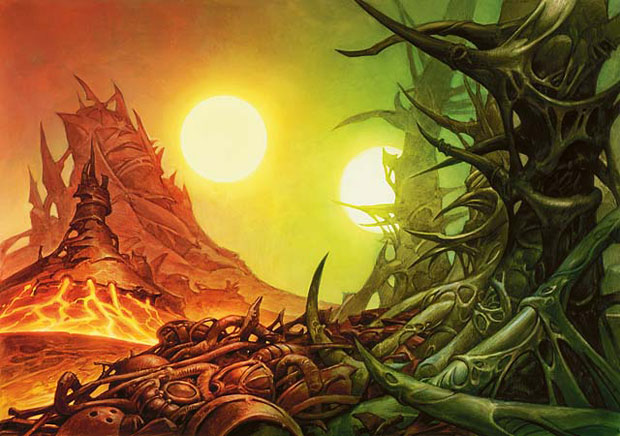 Their motions through the sky are the subject of great interest to Mirrans. The goblins, for example, attribute great mystical import to the red sun, which they call the Sky Tyrant, and celebrate with wild festivals when the Sky Tyrant is directly above Kuldotha, the Great Furnace. The new green sun (the fifth mana orb that is behind the Fifth Dawn set) has brought unprecedented amounts of light streaming into the dense, copper-treed Tangle forest. The elves refer to it as the True Sun, as it's the only one that passes directly over certain parts of the Tangle. 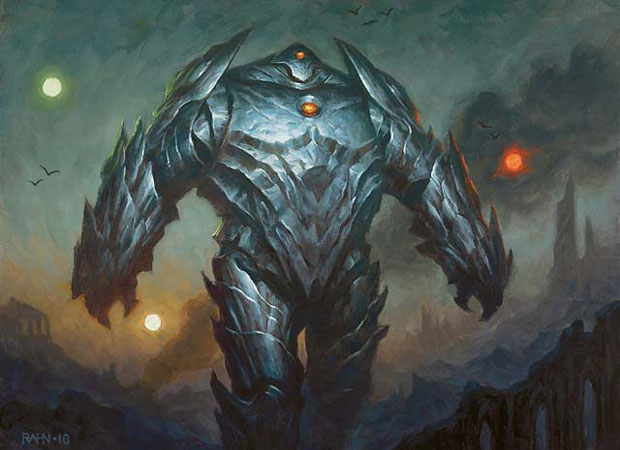 The suns probably do not have strictly elliptical "orbits." From any given vantage point, they appear to rise, and eventually they set. But their movements across the sky and their positions relative to one another differ day by day. There may be a model that makes sense of it, but if there is, it probably involves a significant amount of mystical weirdness, and isn't buildable with some wires and rubber balls.

We haven't ever talked about whether the suns can collide, but they haven't yet, so—probably not? I'm not sure anyone knows what two huge mana-suns would even do, even if they did come close to each other. Harmlessly phase through each other like holograms? Mingle and disrupt, and start shining hybrid mana? Maybe a certain silver golem knows.

Is it ever night on Mirrodin? In some spots, and for short periods, I believe the answer is yes. There are certainly areas of shade, such as the deepest valleys of the Oxidda Chain and the densest groves of the Tangle. But there are probably some rare spots and rare times at which, from that location, all five suns appear to be hidden, and true night falls. The vast majority of the time, though, one sun or another is visible in the sky, and often more than one. By and large, shade is night on Mirrodin. (As a light-sensitive sleeper, I would probably live with the leonin in one of their dens, or else in the Tangle, where at least it's sometimes dim enough not to get melanoma during a nap.)

Because we're so used to our own planetary system (and because we stretch words like "sun" to refer to Mirrodin's mana-satellites), we naturally compare Mirrodin's cosmology to our own. But thanks to magic, the differences are actually many. We have dozens of artists illustrating the Scars of Mirrodin block, Levi, and we have tons of precedent set in the art of the original Mirrodin block and in the Mirrodin block novels. Given any simple orbital or gravitational model, there will be contradictions with art or narrative canon. But there's a force more powerful than gravity. It's Magic.