Phyrexia: The Strong and the Scattered

f the Mirrans had known of the evil that was incubating inside their planar core, they may have had a chance to thwart it before it took even a single Mirran life. They might have been able to send teams of specialists down into the core, protected by a halo of summoned creatures and shielding spells, on the path to hunt the source of the corruption and wipe it out once and for all. 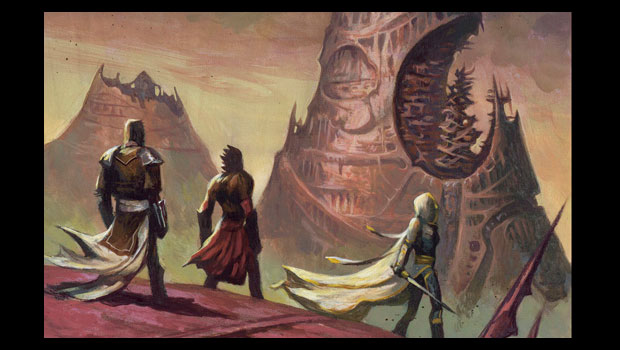 In fact, that's what Koth, Elspeth, and Venser thought they could do. Koth learned of the danger to his home world of Mirrodin when the Mephidross began spreading beyond its borders, and sought other-planar help to put a stop to it. Elspeth had first-hand exposure to the evil of Phyrexia in her childhood, when it ravaged her home plane; it left wounds on her psyche that still plague her today. And Venser grew up in Urborg, a place that will be forever recovering from the scars of the Phyrexian invasion of Dominaria—and he had a personal connection to Mirrodin, in the form of his former mentor, the silver golem Karn, Mirrodin's creator. All three of these planeswalkers knew the potential danger to Mirrodin. And all three of them believed they could track the Phyrexian corruption to its source, do a little magical dueling zap bang k'pow, and with any luck, wipe this force off the plane once and for all.

As it turned out, it was way too late for that. 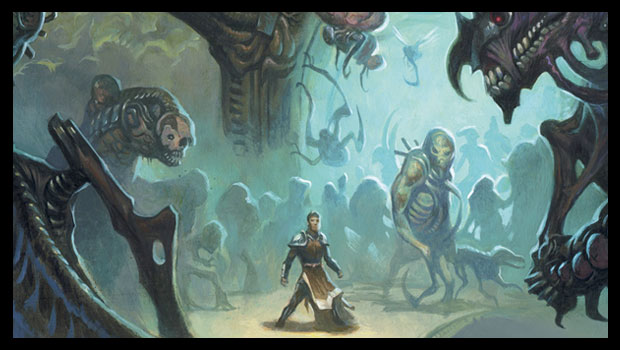 The eradication of Phyrexia is tricky. It's not just the resilient nature of the Phyrexian oil, which carries the seed of corruption within every drop. It's not just the slippery-slope "zombie math" of any enemy that recruits its victims, which can turn any terrible battlefield victory into a doubly terrible mass Corrupted Conscience. It's also, strangely enough, the element of surprise. Phyrexia always seems to startle its victims, even when it hasn't had the advantage of cozily nesting within the mana-rich core of Mirrodin and then popping out at a crucial time, after battling Memnarch has already taken its toll on the populace. It's as if Phyrexia's ruthlessness and hunger is too vast to fit well into innocent brains; people just never anticipate the extent of the danger. Nothing could want to wage war on entire ecosystems, they think. No force could want to supplant our entire way of life with their own twisted version, using our component parts as raw materials in their vat factories. No civilization could be founded on the fervently-held idea that perfection somehow lies in the synthesis of necrotic tissue and oil-stained metal.

It's an advantage to be continuously underestimated. And it's that advantage that has allowed Phyrexia to gain a foothold on Mirrodin, not just as a niggling infection, but as a full-fledged pandemic. Phyrexia has flown under the radar—deep, deep under the radar—and it took advantage of that quiet time to establish itself. Even when it appeared on Mirrodin's surface, in those first encounters with nim, vedalken, elves, or the odd Mirran vermin, Phyrexia exploited its mystery. Phyrexian creatures played on the Mirrans' tendency to write off their encounters as isolated attacks or ordinary Mirran phenomena. 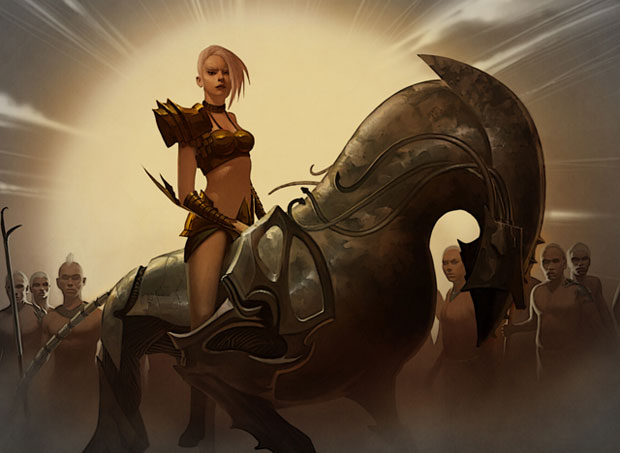 Interestingly, a similar pattern holds for the Phyrexians, but in reverse. While Mirrans are unifying, the Phyrexians are diversifying.

During the Phyrexian invasion of Dominaria, Urza's planeswalker allies devastated the plane of Phyrexia, leaving Phyrexia's home all but destroyed. However, that insidious colonization weapon, the Phyrexian oil, ensured that Phyrexia would endure nevertheless. All it needed was a new plane to accommodate it, a new host organism to infect, and it would rise again. 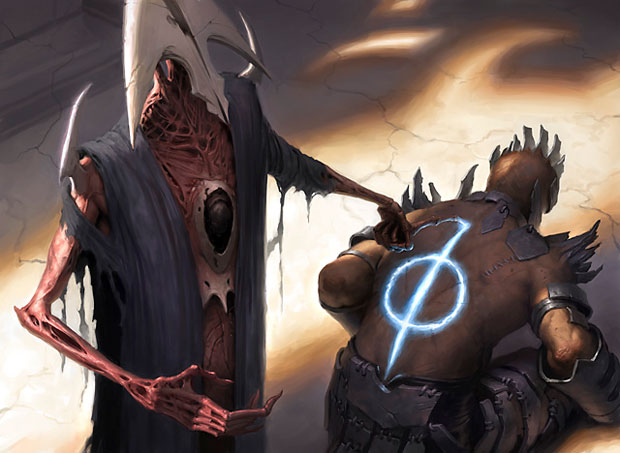 But its new would-be home has changed it. Phyrexia always adapts to its surroundings in whatever manner will allow it to thrive. In its original system, Phyrexia only had access to black mana, so it grew as a black-aligned, necromechanical force. Here on Mirrodin, Phyrexia has evolved along all five colors of mana. (You'll see Phyrexia branch into new colors at the Mirrodin Besieged Prerelease.)

This new form has made Phyrexia both stronger and weaker. It has spread into five color-aligned wings, allowing it to diversify and adapt more than ever before—giving it unprecedented strength and resilience in the fight versus the Mirrans. But this change has also introduced schisms in Phyrexia's core. What was once a monolithic threat united under Yawgmoth is now five distinct subfactions. Each bloc is Phyrexian through and through, but each has organized around a slightly different philosophy.

Each of the five Phyrexian factions is led by its Praetor. Each Praetor is a cunning Phyrexian ruler that sets its faction's agenda and embodies its principles. Each Praetor has its own policy about how best to wage war against the Mirrans. Each has its own opinions about the potential success or uselessness of the other Phyrexian factions. And each Praetor has its own agenda regarding Karn, the silver golem whose fractured mind many hope will forge a victory for Phyrexia. For his part, Karn has been vacillating between polar opposite mental states, sometimes raging against his imprisonment in the Phyrexia-controlled core, sometimes embracing his throne (as it, indeed, has embraced him) and acting as the new Father of Machines. The Praetors offer him self-serving counsel, hoping to "Wormtongue" their way into his new regime and/or exploit his frequent losses of sense. But they all agree—whether by unity, experimentation, enslavement, industry, or predation, Phyrexia will ascend as the dominant power on Mirrodin, indulging no free species. 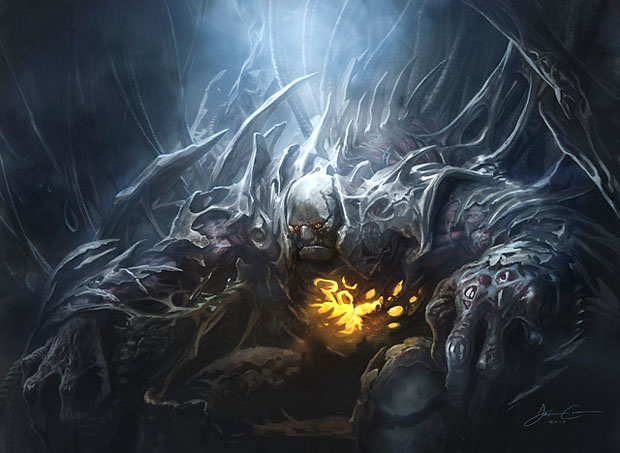 Phyrexia's diversification is at once its greatest strength and its greatest weakness. It has reworked itself to take the greatest advantage of the world around it, and it has picked up new forms and new, brutal magics—but it has gained this at the cost of unity of purpose. The Mirrans may be overwhelmed by Phyrexia's new expressions that attack it from every angle—or the Mirrans may find a way to use the chinks in Phyrexia's newly factionalized structure to bring the whole thing tumbling down. War will tell. 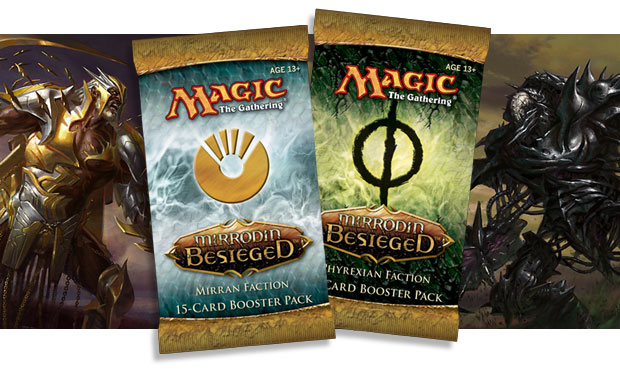 I wanted to get to the Letter of the Week today to expand a bit more on what's going on within Phyrexia. I've held on to this letter from reader Christian for a while, since a time before Mirrodin Besieged previews began, intending to get to it when I could give a more complete answer. Now I can, so now I am. I'll answer Christian's letter in pieces.

After checking out Magic Arcana and seeing the preview card for "Glissa the Traitor" I am intrigued, alarmed, baffled and bamboozled. Since preview week is coming up, I was hoping you'd answer some questions about Phyrexia's major players.

After freeing Mirrodin from Memnarch's clutches, why did Glissa choose to side with Phyrexia? I say "choose to side" oppose to "corrupted by" based on her being called "The Traitor," since presumably Mirrans know about the corrupting nature of Phyrexian oil, they probably wouldn't call their greatest hero a traitor unless they were really mad.

Glissa's story involves misconstrued evidence, undeserved blame, geographical misfortune, and ultimately, yes, a betrayal—but perhaps not in the way you might think.

Glissa Sunseeker was the hero of the original Mirrodin block. She was once the finest hunter in the Tangle, but her destiny led her to be the target of Memnarch, the one-time guardian of the plane. Memnarch believed he could use Glissa to gain a planeswalker spark for himself, and would stop at nothing to engineer that eventuality. Glissa managed to thwart Memnarch's plans at the end of the Mirrodin block—but then she disappeared without a trace. 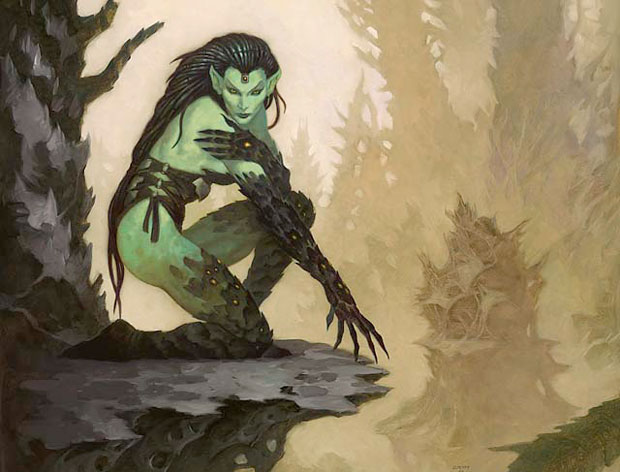 Meanwhile, Glissa's former allies, the other elves of the Tangle, believed she played a role in Memnarch's attacks on the Tangle and the destruction at the Radix (that's the misconstrued evidence part). With Glissa gone, they were unable to hear her side of those misfortunes, and her good name became sullied. Over time, the elves took to blaming more and more of their misfortunes on the absent Glissa. When Memnarch's soul traps activated, most of those who knew of Glissa's heroism disappeared (including all the trolls but one), and the elves had yet another catastrophe to blame on the former hero (that's the undeserved blame). They called her Glissa the Traitor, and the name stuck.

Glissa retreated back into Mirrodin's core. There she encountered a small army of tiny constructs, and they carried her down into the core's depths. The machines kept her safe and sound—but unconscious.

Meanwhile, the Phyrexian oil within the core of Mirrodin grew and spread (this is the geographical misfortune). Glissa's presence in the core caused her to be corrupted along with everything else with which the oil came into contact. The Praetor Vorinclex compleated the former elf hero, taking her as a powerful ally in the siege to come. When the time was right, she would be unleashed. 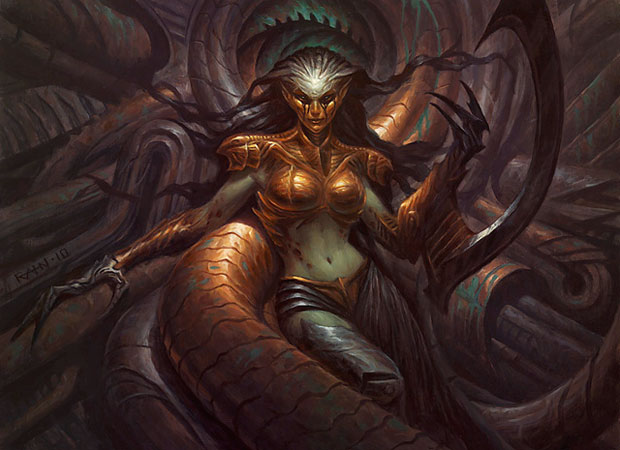 At the tone, the time to unleash Glissa will be ... now. The savior of the plane, who was once misleadingly called Glissa the Traitor, is now genuinely a traitor to her former principles (that's her true betrayal). She has become a powerful arm of Phyrexia's green-aligned faction, but with a cruel, selfish twist. She once saved this world; as it turned out, she seems to have saved it for her new, darkly ambitious incarnation—or for her new masters. 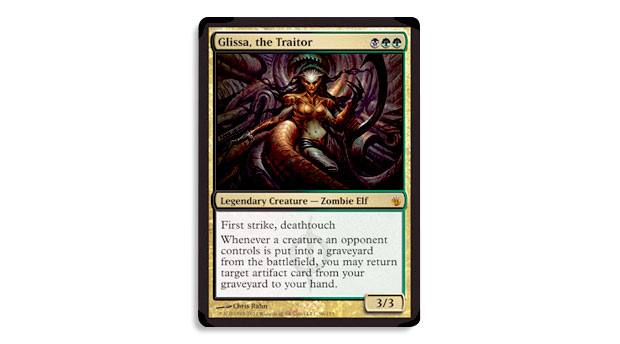 How did Karn get Phyrexified? Or Tezzeret? Is Karn imprisoned in Mirrodin's Core, left to rot as the oil seeps into his mind or has he already switched sides, and is working to complete his imperfect world? 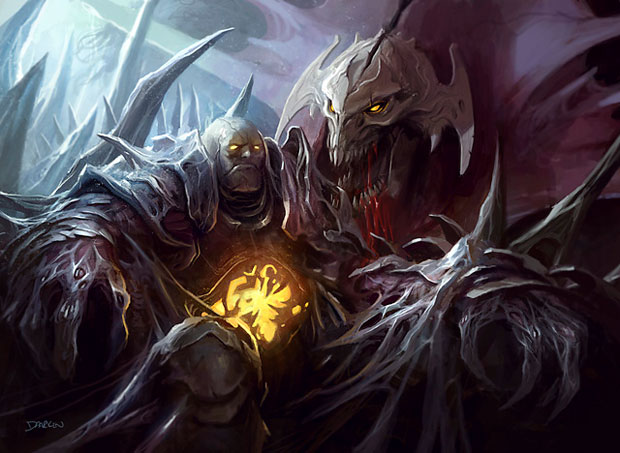 Karn is indeed imprisoned in the core. As you may have read in this story by my colleague Jenna Helland, Karn is conflicted, torn between the corrupting Phyrexian influence around him and his devotion to the world he created and the innocent Mirrans who live there. If he can't combat Phyrexia's influence, he may accept the reins of leadership of Phyrexia and unify its purpose. 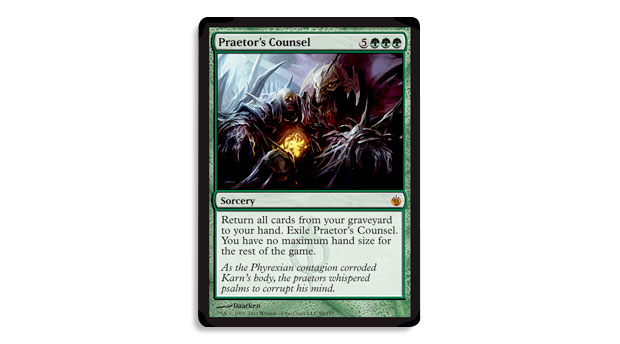 Is Tezzeret working with Phyrexia out of convenience, or is he trying to find a way to rid himself of the divine message? Or is he truly dedicated to the Father of Machines? 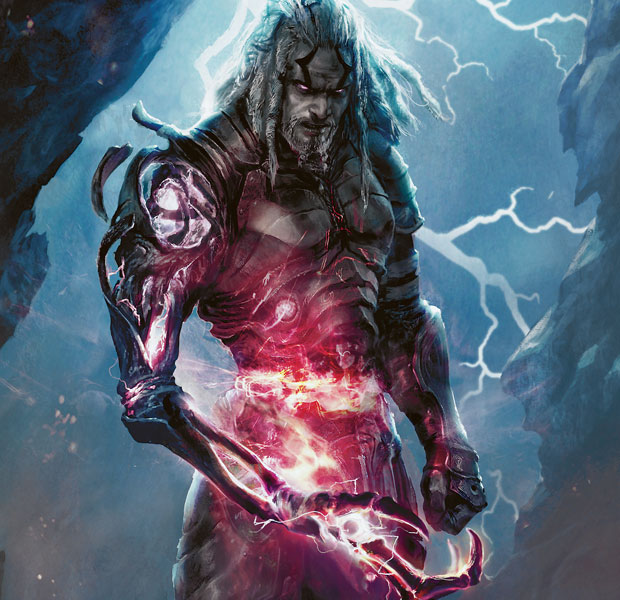 While Tezzeret is fascinated with the machine civilization of Phyrexia and interested in the potential of the metal world of Mirrodin, he is actually on neither side—or rather, he's playing both sides against each other. (Like the other planeswalker cards in this block, his card does not bear a watermark.) Tezzeret is on a mission here—he serves as the eyes and ears of one who has great interest in how the war on Mirrodin turns out. 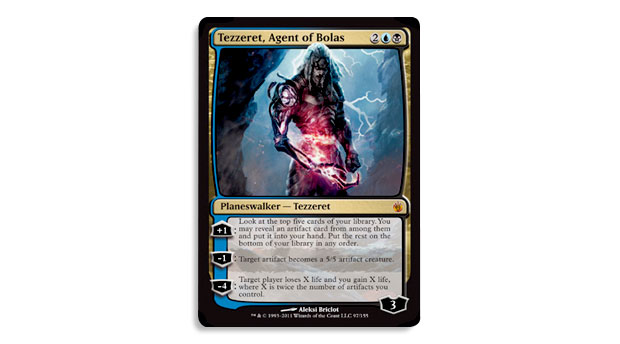 One last thought, who is Sheoldred?

Sheoldred is one of the Phyrexian Praetors, and you can hear her quoted here and there in the flavor text of Scars of Mirrodin and Mirrodin Besieged cards. In the war between the Mirrans and the Phyrexians, she definitely serves as one of the major generals on the Phyrexian side. 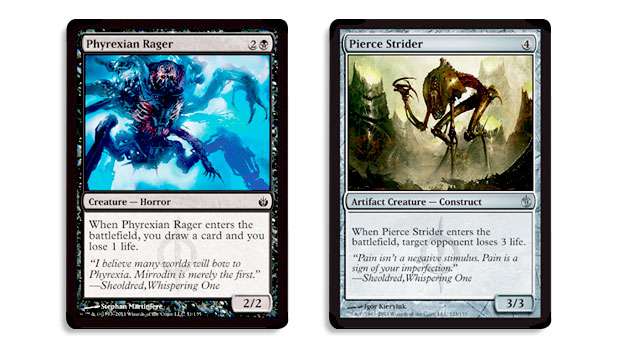 Thanks for your questions, Christian!

You have the opportunity this weekend to choose and fight for your favorite side in this war. Don't miss the Prerelease for the day to declare your allegiance!