Guul Draz is a humid continent, with tangled jungles and waterways that twist and spread into vast marshes and lagoons. Guul Draz is home to more ruin sites than other continents, and it's rife with poisonous creatures and diseases. Despite the overall sense of decay, and the foreboding nature of the ruins that jut up out of the swamps, Guul Draz has thriving cultures.

The merfolk move freely along the rivers that make the best highways throughout Guul Draz. The land is overgrown with trees and roots, or is unsound and glutinous, but the water is smooth and easily traversed on barges, or below the surface. Humans have carved out several settlements along the edges of the continent and can be found living in small villages along every major waterway and plying the river trade, which is very profitable, despite the great risks.

Humans and merfolk do great business on the waters, and at the center of it all, the vampires thrive. This is the vampire's homeland. Whereas in other continents vampires tend to live discreetly amongst other living creatures, in Guul Draz they live openly. They are dangerous, sometimes turning on the merfolk and humans that live amongst them, sometimes infiltrating and feeding on the merfolk and humans that attempt to live apart. Despite this, Guul Draz has a significant number of visitors. Although there is risk walking among the vampires, there's also promise of dark power and wealth. 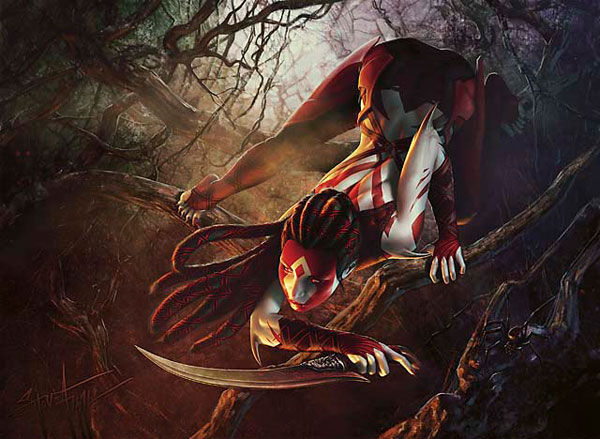 Nimble Alema—that's what we called her as a child. She is an exceptional trapfinder: quick eyes, clever fingers, can even cast a spell or two. She warned me that she'd die young. But I can't leave her on this wretched continent, trapped in a demon's lair or as a vampire's pet. If there's a chance she lives, I will find her. If not, I will carry her bones back to Tazeem.
—Anbecan of Tazeem

Malakir is the most well-developed city on Zendikar, although still small and simple compared to metropolises on other planes. It is built amongst the swampy lands near a massive ruin known as the Hagra Cistern. It has a reputation for debauchery and decadence, as befits the hedonistic ways of the vampires. The city is divided into five districts, each named after the vampire family that controls it:

Ghet District is a currently impoverished. The family Ghet suffered a major setback in political fighting that resulted in Emevera diverting water around their dykes and flooding Ghet. Ghet has built temporary dams, but the damage to their holdings was significant. 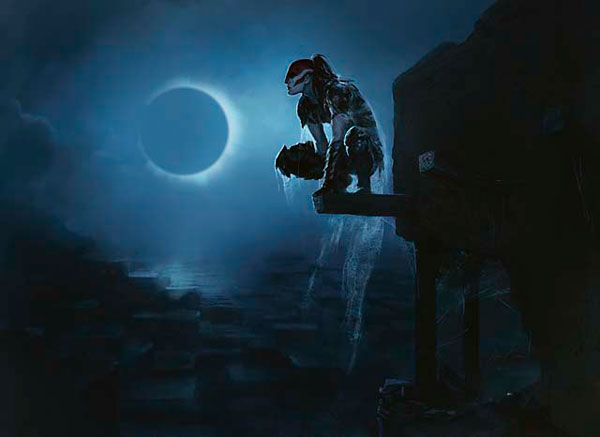 The Nirkana are cutthroats who run about the swamps like drooling animals. The Ghet are no better than gutter rats. The Emevera are so common they couldn't appreciate a fine meal if it died on their doorstep. The Urnaav are obsequious idiots who think we are too stupid to see their machinations. They would all be Kalastria if they could, and who could blame them?
—Lyandis, family Kalastria

The Free City of Nimana

A coastal city built by humans, the Free City is ironically named, because it is the major port where slavers arrive and sell their wares. The most hardened denizens of Guul Draz, mostly vampires but also lowlifes of other races, purchase slaves in huge lots to work in their industries, and in the case of the vampires, to provide new food and sport. Likewise Nimana is the major export center for the mercantile products of Guul Draz that are sent to other lands for trade. As such, nearly every vampire that is heading out to infiltrate the rest of the world passes through Nimana.

Family Ghet has been using their alliance to gain access to the inner decision-making apparatus of Nimana, and are actively converting influential members of the town to their cause. Their plan is to eventually seize outright control of the city and integrate the city into their holdings, raising their own prestige and power.

A vast region of limestone gullies, sinkholes, rises, and caves, the Pelakka Karst is actually the shattered remnants of a filtration system that fed the waters around the Hagra Cistern, an ancient structure, vast and mysterious in purpose. An area of badlands encircling the Cistern, the karst is so treacherous to navigate that even the merfolk will travel long distances to avoid crossing it. The karst is home to some of the largest river predators in all of Zendikar. Humans will sometimes venture through the Karst, mostly bandits who will risk the dangers to avoid the river patrols, but few survive the unpredictable currents and the vast whirlpools that can form unexpectedly whenever a sinkhole forms and sucks down the waters. In addition, much of the Karst shifts regularly, and some of the caves are actually monstrous mouths. Travel down the wrong channel and you can find yourself ground to a paste by the rapidly moving walls.

Tribes of ogres make their home in the Hagra ruins. Cruel as vampires, they place no value on life. It's like their lungs are filled with the foul breath of the underworld. I always hire one, though, because they can slaughter undead better than anyone else.
—Ferth, Nimana expedition leader

A form of reverse sinkhole, a 'filth burst' is a massive eruption of oily black toxic sludge that bursts out of the ground unexpectedly. Throughout Guul Draz, there are patches of ground that look solid, but in reality are a thin crust over a tumulus of compressed waste. The slightest damage to the crust can allow the tumulus to explode from the ground, engulfing whatever had the misfortune to step on it. Filth bursts are highly toxic, both physically and magically. They can poison and kill whatever they engulf, or even worse, mutate and derange it, spawning a filth beast. 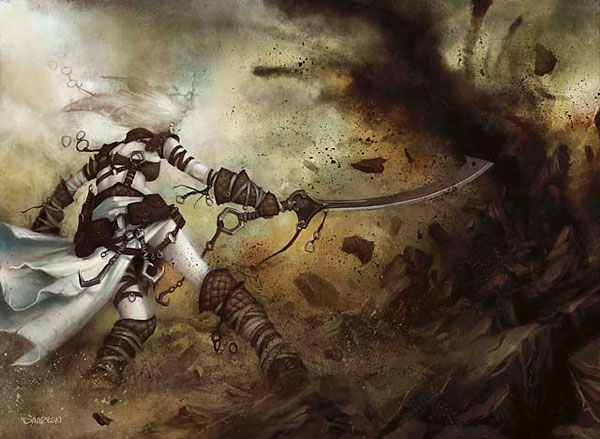 The Hanging Swamp is north of the Hagra Cistern, home to several tribes of humans. The Hanging Swamp is a giant sinkhole, 20 miles in diameter, with a floating swamp suspended above it in a glittering arc of water blobs connected by reeds. The entire mass is shot through with roots and creepers, anchoring the whole soggy mass to the ground below. The Hanging Swamp is a maze of floating water globules, and once you enter, it takes an expert guide to find the way back out. Because of a standing effect of The Roil, the entire swamp is in constant motion, the vines twisting and coiling, and the water globules flowing from one location to another. This constant motion means that the path an adventurer followed into the Hanging Swamp is not reversible — the way out is constantly shifting and changing. 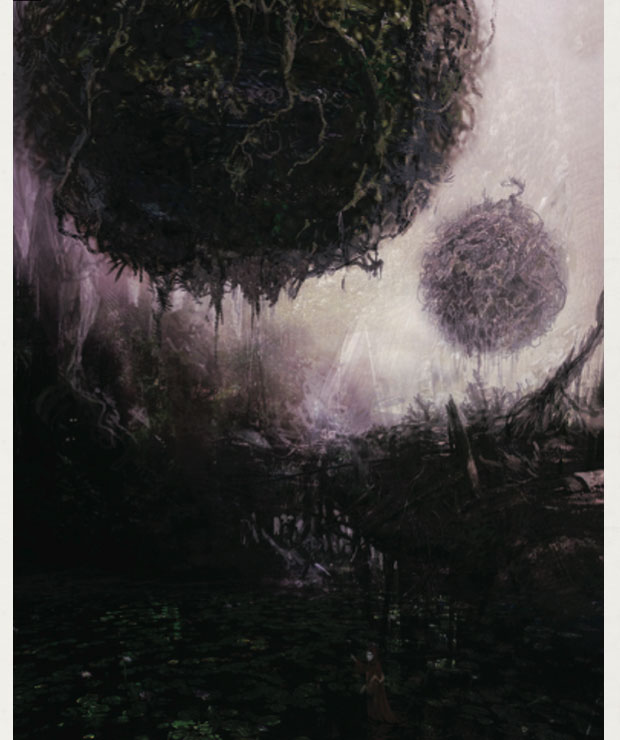 The Hanging Swamp is filled with predators that use the terrain to mask their own presence and trap prey. Giant amphibians and insects abound, mixing fluidly with the vines and creepers that make up the "solid" terrain. Many are too small to be a threat to intelligent creatures, hunting smaller prey, but the swamp is home to the deadly Guul Draz Python, which is more than happy to consume man-sized or larger prey. 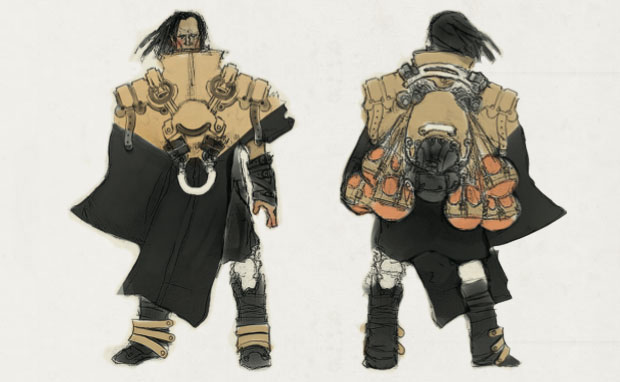 The vampires of Zendikar feed off of the energies in the blood of living creatures—energies that are particularly strong in times of terror and pain. Their skin feels cold to the touch, and they are consumed with dark passions and blood hunger. Vampires are long-lived—around two hundred years on average. 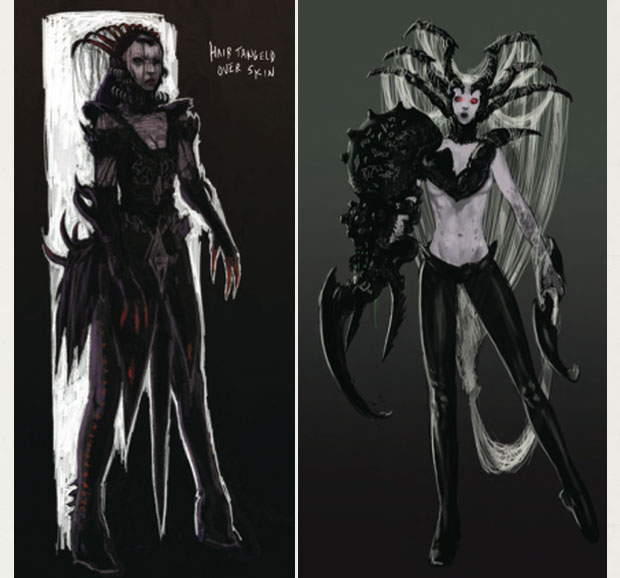 The vampires dress themselves in leather and insect carapaces ornamented with silks and gauzes. They often decorate their skin with paint made from blood and minerals. Complex layered clothing appeals to them, and they long ago adopted almost aristocratic styles of costuming. Because they aren't warm-blooded, they suffer no discomfort wearing heavy outfits in even the fetid air of Guul Draz.

The pretentious Kalastria pretend that only human blood will satisfy them. Fattened weaklings. They never know how it feels to run through the jungles in pursuit of a bloodscent. The tang and pulse of feral blood has no equal."
—Nirkana Lacerator

Vampire settlements are perhaps the most cultured places on Zendikar. Many vampires value art, ritual, and even primitive theater, and their sense of macabre ornamentation has a dark appeal even to some non-vampires (although other races tend to admire from a distance). Each of the powerful families is under the rule of a different Bloodchief, and any visitor to their lands is well advised to have the protection and patronage of a family, especially if they intend to attempt to live amongst the vampires.

The Bloodchiefs are ancient vampires, the progenitors of their race. They tend toward neurotic insanity, though a handful could be considered good, relatively speaking. Vampires are sired by Bloodchiefs, and the tastes and passions of the Bloodchief tend to be imprinted the vampires he or she creates. When a Bloodchief drains enough blood from sentient creature, that creature becomes a vampire. But only Bloodchiefs can do this. When another vampire drains enough blood from a sentient creature, it becomes a null, not a true vampire. 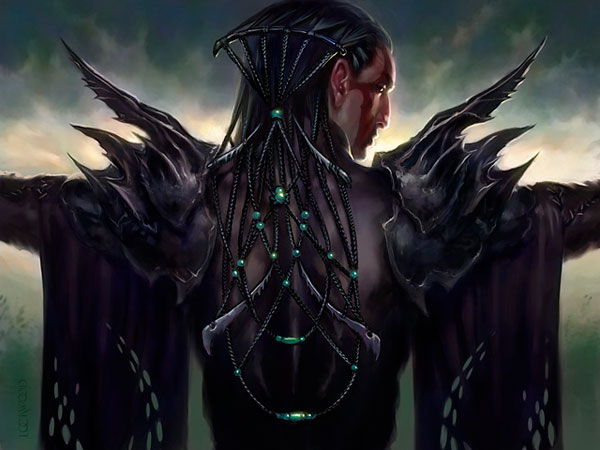 The vampire nulls are faceless undead thralls, a sort of high-speed zombie. They are easily commanded by other vampires, though if they are left without orders they will hunt and kill whatever living things that they can find. When a vampire fully drains the blood of a living creature without destroying the husk (a common problem for the more violent and sadistic vampire), a vampire Null is created from the body. The victim withers into a gaunt form, its skin goes completely pale, and its facial features vanish except for the mouth, leaving its face a smooth ovoid with teeth. Megalomaniacal, evil vampires lead armies of nulls, using them to sow terror. 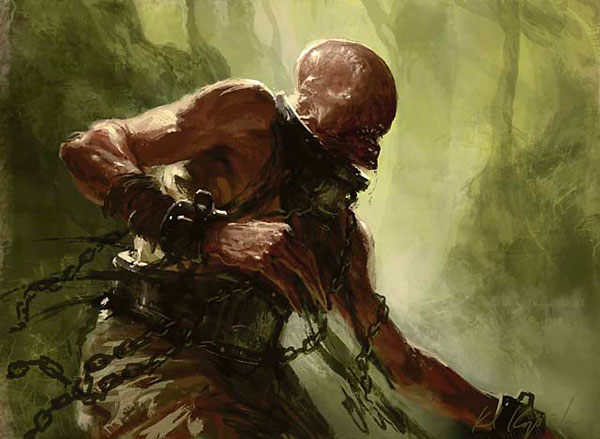