Rise of the Inbox

ise of the Eldrazi is just days from hitting the shelves, and frankly I'm not certain that the shelves are structurally capable of handling it. Here's hoping.

The set has been generating a lot of great, thoughtful mail. I thought about printing them all out and building a giant printer-paper Kozilek, Butcher of Truth, in hopes that the discussion of Rise of the Eldrazi would cause it to lurch to life just like the Golem of legend, but I figured that was too likely to work, causing catastrophic harm to the world until I could build a giant paper Eye of Ugin and a kajillion origami hedrons, so I decided just to do a mailbag column instead.

Dear Doug Beyer,
I know that the Eldrazi are not connected to any colors...but they do seem to have an affinity for certain colors, if only thematically.

Like I see a lot of Black/Green themes in Ulamog, the Infinite Gyre's description.
--Nathan

The Eldrazi themselves have no color affiliation, being strange astral beings from the Blind Eternities. Even when they materialized into Zendikar, their bizarre forms still had no particular resonance with any of the five colors; their magic, as seen on All Is Dust or Not of This World, remains as colorless as artifacts. 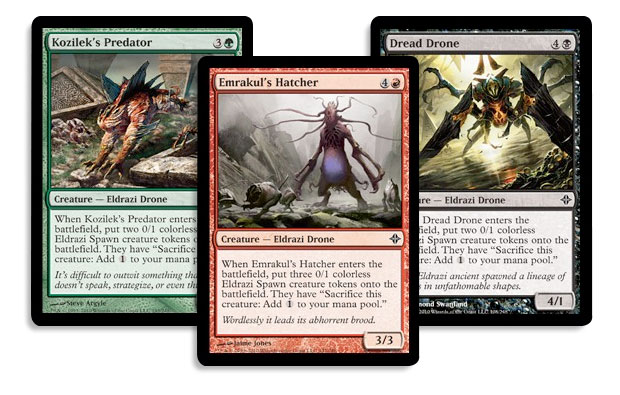 However, the brood lineages—the races of Eldrazi Drones and Eldrazi Spawn that sprang up around the three legendary Eldrazi titans—do tend to gravitate to particular colors. You'll notice that, in the set, Eldrazi Spawn are only created by black, red, and green cards (plus, of course, some colorless cards). Each of the three brood lineages—the Emrakul, the Aeons Torn lineage, the Ulamog, the Infinite Gyre lineage, and the Kozilek, Butcher of Truth lineage—mystically "inherited" bizarre traits from their leader, but also took on some traits from Zendikar's mana, making some of them colored creatures. In particular each lineage tended to focus on two colors—if you recognize the patterns of physical traits of each linage, you can figure out which is which.

Next week we'll get into that more when we look at gobs of high-res Eldrazi art.

Dear Doug Beyer,
After viewing the visual spoiler for ROE I'm disappointed that Ghostfire is not reprinted in this set. It seemed like a shoe-in flavor wise. With 5+ other burn spells in the set, why doesn't flavor win?
--Brian

It's true that the Future Sight colorless burn spell Ghostfire, and its flavor text, were the inspiration for the backstory of the Eye of Ugin. Chandra gains the ability to wield colorless fire in order to unlock the Eye of Ugin in the Awakenings comic—in fact we thought of her as becoming "Ghostfire Chandra" there. So why wasn't Ghostfire in the set?

We knew early on that Rise of the Eldrazi would feature strange colorless creatures and spells, and we looked to Ghostfire as the example of similar magic in Magic's history. We spun a mythology about the spirit dragon Ugin and how his strange "sheer fire" would be the key to bringing the Eldrazi (at least temporarily) under control.

As the set design progressed (bravo to lead designer Brian Tinsman), the implementation of colorless spells became solidified, and the result was pretty far from what Ghostfire was doing. Instead of being spells with colored mana in their costs that had the rules text "CARDNAME is colorless," the Eldrazi had spells with colorless costs. We created new, glasslike card frames for the Eldrazi cards that were very different from the Future Sight Ghostfire frame.

We began to think of Ghostfire as the magic of Ugin, the Spirit Dragon, rather than Eldrazi magic—both colorless, but for different reasons. Ugin's breath was red magic that he learned to make colorless (presumably to set fire to annoying pro-red dudes). Eldrazi magic, on the other hand, was natively colorless, an otherworldly type of sorcery that was rooted in the Eldrazi's colorless nature.

The creative team could have pressed for Ghostfire to appear in the set, since it played such an interesting role in the backstory. But in the end it was not Ugin's set, but the Eldrazi's set to shine, and we let Ugin come up in other ways (such as the legendary land in Worldwake). Still, to us, Ghostfire did exactly what we hoped Future Sight would be able to do in a few instances—provide enough hints about some other worlds, characters, and magic that we could build future (and past) stories around them.

Dear Doug Beyer,
I have a serious flavor issue with Rise of the Eldrazi. According to the story, it took 3 Planeswalkers a great deal of effort to imprison them, and another 3 Planeswalkers and a Ghostfire to free them. But yet I, a lone "common" Planeswalker, can summon the mightiest of them and order them to do my bidding for a mere 15 mana? It just doesn't seem... right.
--Jim

Powerful things happen during a game of Magic, Jim, and the fact that we've put the Eldrazi in your hands means we're trusting you with some of the most reality-tearing, untamed forces of the Multiverse. It means we don't see you as a "common" Planeswalker at all. Frankly, if you can muster fifteen mana during a game, you're a force to be reckoned with—right up there with Chandra and Sorin and all the rest. Sure, there are ways to "cheat" out an Eldrazi—but it's not easy, and not everyone can do it. No matter how you do it, if you can get one of those massive Eldrazi under your control, you have commanded potent magic, and you deserve to have them walking by your side. People win games of Magic all the time with ragtag bands of goblins, but you put an annihilator trigger on the stack? You're winning with style.

On the other hand, summoning Emrakul, the Aeons Torn is not the same as luring the Eldrazi titans out of the aether and binding them to a world for thousands of years. That is a feat that would probably take you and two of your Planeswalker buddies. The same with freeing the Eldrazi—it took a once-in-a-generation feat of fire magic for Chandra to intuit the spell necessary to "unlock" the magic of the Eye of Ugin.

Now, the kind of "monster invasion" story that Rise of the Eldrazi represents presupposes a certain level of invincibility on the part of the monsters. Magic is an extremely interactive game, and it has plenty of ways to summon, destroy, exile, manipulate, and gain control of Eldrazi (well, in the case of Emrakul, the Aeons Torn, maybe not plenty of ways)—that interactivity is just how the game stays fun. If we make too much of a deal of those means of interaction with the Eldrazi, then the story doesn't have the same punch. Godzilla wouldn't be as interesting if the guns and missiles of the Japanese armed forces actually did anything to it—the whole idea of Godzilla is that it's an unstoppable force, beyond human power to stop.

My point is that what's fun in the game is not always fun in the course of the story, and vice versa. So the denizens of Zendikar can't end their Eldrazi troubles with a quick Day of Judgment followed by a Mind Control or two. And on the other side of the coin, you get to summon Eldrazi (or, for that matter, beings such as Nicol Bolas, Planeswalker) to your side for "merely" fifteen mana. It still feels like you're commanding immense, preternatural forces of destruction, I promise. You should try it!

I really like Ondu Giant, from Rise of the Eldrazi. It's my favourite common in the whole set. There have been monogreen giants before, but there has never been a giant druid. Druidry does not seem to be a profession that giants take to very often in Magic (perhaps because the 'green man' legends exist in a different form in Magic - Maro).

At first I wondered why Ondu Giant was a druid, when the land-fetchers that I've come across or used (Wood Elves, Borderland Ranger and Frontier Guide) are scouts. Then, whilst searching through cards online, I came across Farhaven Elf, an elf druid from Shadowmoor that does the same thing as Ondu Giant. Ondu Giant is a, well, giant version of Farhaven Elf.

So that might be its origins in the game of Magic. But what are is the origin of the Ondu Giants in the world of Zendikar? There are four other giants. Two are the white hurdas used by the Goma Fada caravan. But hurdas look bestial, and they are not very intelligent (according to the nomads who work with them, at least). The other two giants are Shatterskull Giant, which hails from Murasa, and Akoum Boulderfoot, from Akoum. These two look a lot more like the Ondu Giant, apart from their faces being twisted into scowls of rage. So, I'm wondering, are the three non-hurda giants all from the same gigantic race that has been scattered across the continents of Zendikar? And what makes Ondu Giants interested in growing things rather than stomping on them?

I would be grateful if you could answer either of these questions. 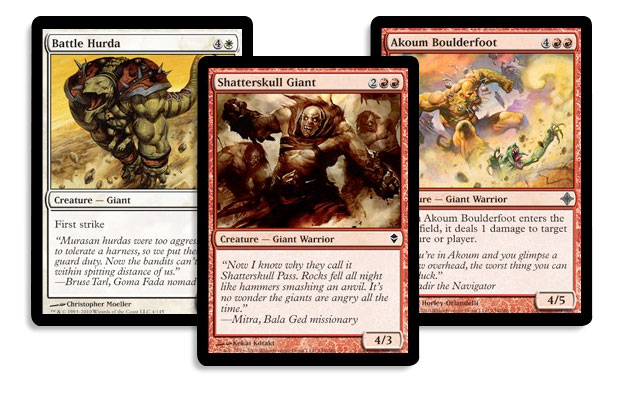 Zendikar represents a bit of a departure on that score, as its preponderance of explorers led us to concept many cards as world-tromping Scouts rather than nature-attuned Druids. 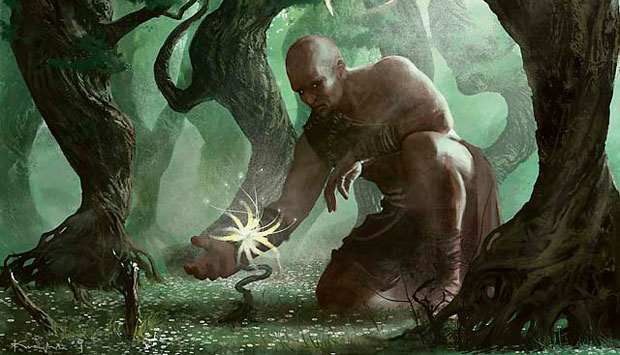 But Ondu Giant is old-school. In many ways, Ondu Giant is an exception. As you noted, Zendikar has two branches of giantkind, the bestial pack-animal race of hurdas and the more traditional "really tall angry person" type giant. Ondu Giant is a member of the latter, although being green, it's one of only a handful. Green doesn't get many Giants in Magic, as their aggressive, step-on-first-ask-questions-later nature fits better in red than in green. But the Turntimber Forest of the continent of Ondu is an ancient wood, full of feral species and strange throwbacks, and a race of giants has persisted there under its twining trunks for centuries. Perhaps the giants appreciate the tall trees hiding them from treasure-seeking adventurers, and nurture the forest to give back to their home. Perhaps they sense the strong mana growing here, and are drawn to its potent pull. Or maybe, just maybe, these giants were descended from different stock. Perhaps they were Druids first and Giants only after years of living among the twisted trees, having attained enormous stature from the power of Turntimber Grove itself.

Thanks for everyone's questions! Next week for our first Rise theme week we talk—what else—Eldrazi.