The Season for Costumes

The clothes make the adventurer, and nowhere is that more true than Zendikar. You don't see ill-prepared people here on this world, style-hounds who favor panache over practicality, because they're dead already. Fashion victims, you might say. Well-dressed corpses.

And there's no better time than Halloween to talk about well-dressed corpses and other, more appropriately costumed explorers of Zendikar, so today it's all about the gear. 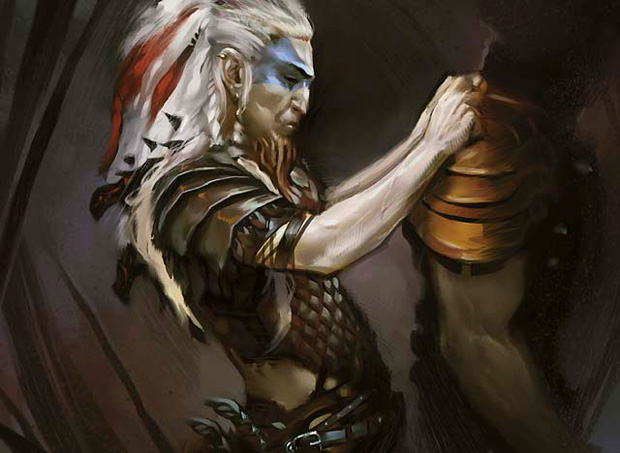 Zendikar is a world that protects its own power. The route to the dread Hagra Cistern of Guul Draz is as deadly as a series of snakebites. The last time anyone whispered the location of the renowned Eternity Vessel, it was with their dying breath. There's incredible value to be plundered here, but you'd better be ready for some extreme bodily harm. That means your choice of attire here involves more than choosing with which obscure local band or clever internet meme to festoon your t-shirt today. It means armor that can come between you and the javelinlike stinger of the Heartstabber Mosquito without making you too slow to outrun a Territorial Baloth; it means a good weapon, wicked enough to deal a well-timed and fatal blow when the Plated Geopede's defenses are down, yet light enough to haul all the way from the flophouse at Kabira Crossroads; and it means the proper gear, to fill in all those impossible-yet-crucial-to-foresee gaps of living need that fall somewhere between offense and defense.

Zendikarians of different races, cultures, and career roles costume themselves in different ways. Warrior and soldier armor is layered with tough yet supple leather jerkins, heavy pauldrons that double as weapon mounts, arrays of cargo sheaths, climbing harnesses and pulley rings, and knapsack chestplates. Every item must serve a double or triple purpose and be accessible at a moment's notice, or else it's not worth the weight on the journey. You'll even see weaponry with sections cut out of the blades, both to reduce its pack-weight and to provide eyehooks for rope attachments. 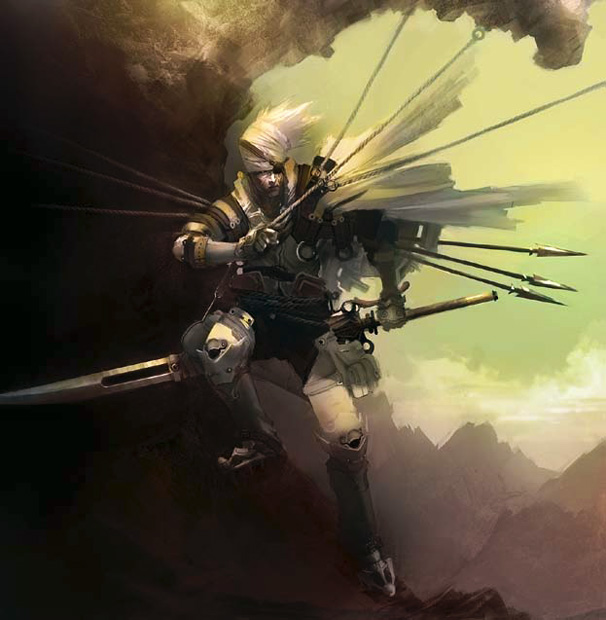 Mage costuming is armor-inspired and magic-infused, often integrating pathway stones—small, rune-etched stone cubes chipped from the ancient hedrons—into their designs. Some mages prepare elaborate mystic devices, from back-slung, spell-filled orbs to arm-mounted, flame-gushing staves, relying on their knowledge and arcane lore gained from previous explorations to equip them for the next. 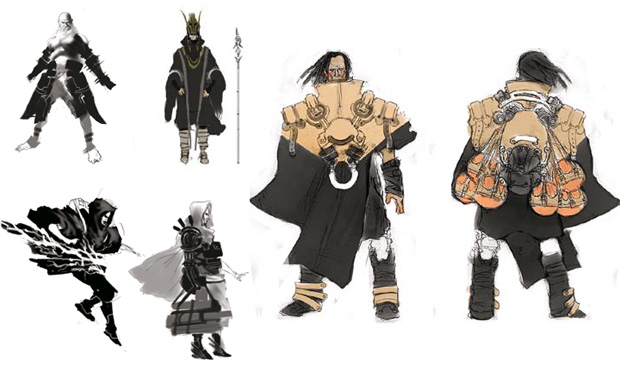 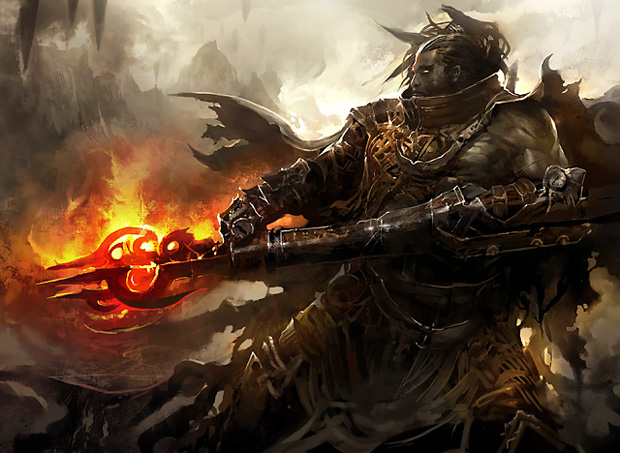 The kor are known for their gear-savvy; for them, practical preparedness is a spiritual duty. Their entire culture is founded on the principles of interconnectedness and nomadism, symbolized and enabled by their reliance on hooks, ropes, and lines. Kor arms and armor tend to be rather lighter than human warriors', a requirement of their eternally traveling nature, but almost no kor is found without his or her trusty hook. The grappling hook is the perfect blend of weapon and tool, an ally of rope and iron in a world where it can be hard to find those of flesh and blood. 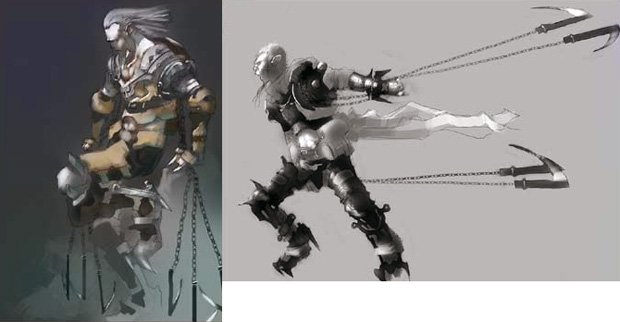 Merfolk armor is streamlined, as intricate as coral, and revealing, as they need good mobility in the water (good thing they have toned swimmer's bodies!). Their clothing and metal rings serve more than a decorative purpose; they can be used to bind up the loose fins on their forearms and calves when out of water. Merfolk wizards and non-wizards alike tend to favor staves, spears, and javelins, preferring weaponry that can hit the mark both underwater and above. Some merfolk master travelers accumulate a veritable reef of accreted artifacts, gems, and other magical discoveries, and almost every merfolk is a storehouse of information. Their dedication to the art of writing is unmatched among the races of Zendikar; their written language is highly developed pictorial system, thickly layered with meaning, so scrolls of tanned hide are commonly found on their person. 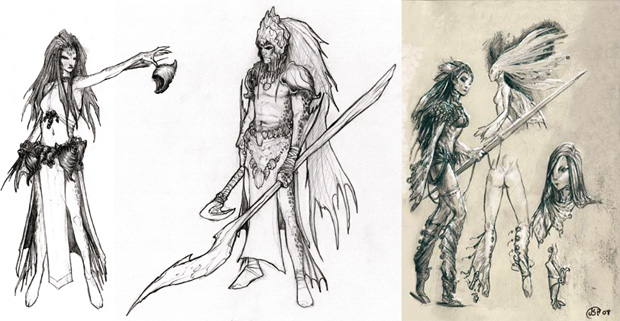 The costuming of Zendikar's vampires brings together the same contrast that embodies the race itself: elegance and brutality. Their armor is made from the shiny black carapaces of giant beetles and other swamp-native arthropods; their long black hair is done up in elaborate braids and wound around steel hoops and bone looms; their faces are painted with blood-red dyes and inks. Their attire is at once aristocratic and decayed, worn with the grace of a fading empire and the fatalism of a warrior tribe. Their weapons are long, fanglike double blades that cut wounds as elegant as the wielders themselves. It hardly needs to be said that nulls, the mindless monsters created by lesser vampires, are clad only hunger and in the rags of their former lives. 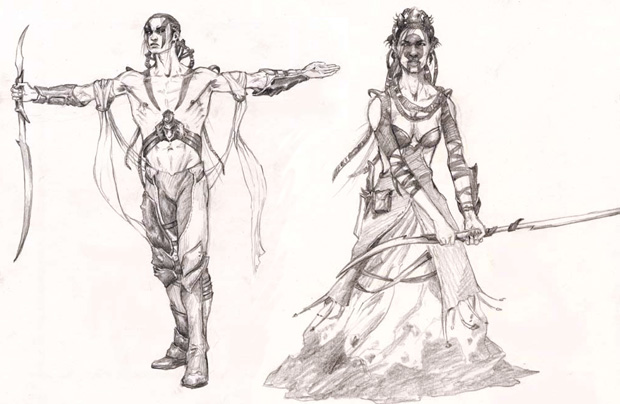 Goblins, bless 'em, appear in various states of preparedness on Zendikar, from the relatively organized Tuktuk Grunts or Goblin Shortcutter to the frankly hopeless Goblin Guide or Torch Slinger. The state of goblin exploration is the adventuring equivalent of a million monkeys with a million typewriters; eventually, one of them lives long enough to discover something worthwhile, as their reproduction rate outstrips even Zendikar's ability to eradicate them. Goblin guides and navigators—chosen more for their disposability than their accuracy—have a fondness for pathway stones, whether they realize the hedron-chips' value in direction-finding or not. 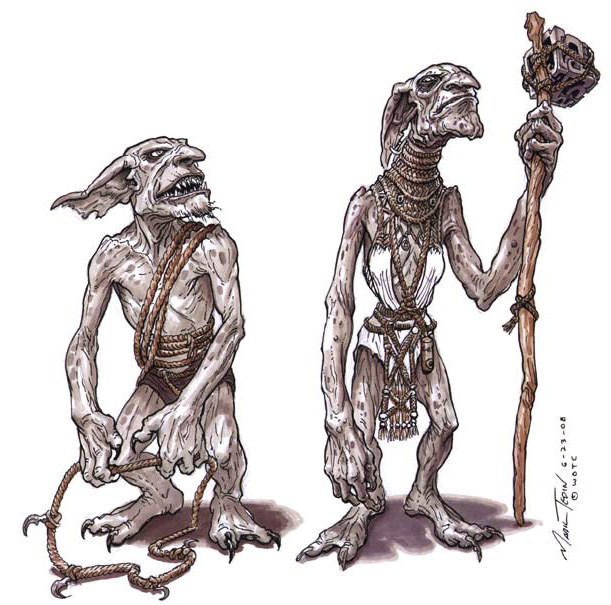 Elvish garb is utilitarian, made from natural materials such as leather and hide, and designed not to interfere with their natural dexterity. Elves are adept climbers, building their dwellings in and around the limbs of mighty trees, and their skill in using climbing gear is well-known. Unlike the exotic-fish coloration of the merfolk or the blood-dyed majesty of the vampires, elves tend to wear drab browns and greens, allowing them to blend in with their wooded surroundings. The one exception is the Mul Daya nation, whose ghost-white facepaint, skull-like eyesockets, full-body tattooing, and fiery red-dyed hair make them stand out like ghouls of the forest. 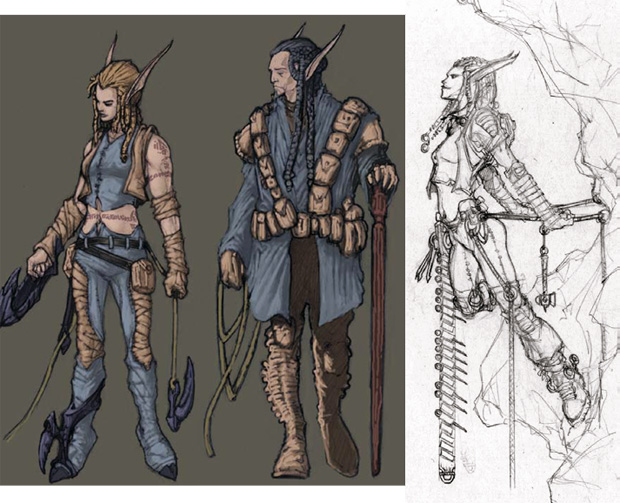 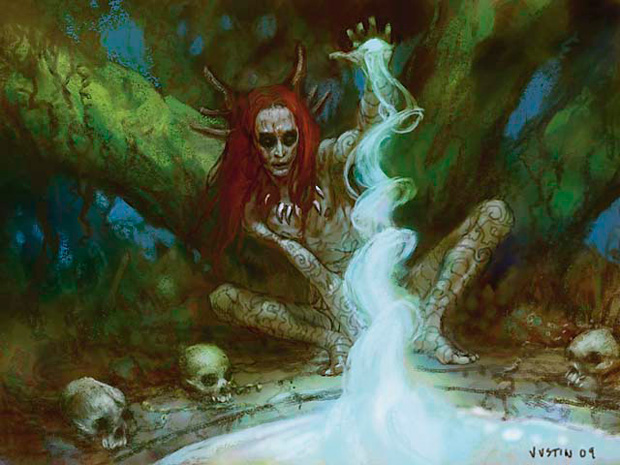 Costuming is one of our key tools for communicating the themes of a setting. We've seen goblins and elves change their physical shape, sometimes radically, from setting to setting, but it's tougher to change the physiology of, say, humans (although we've done that too). From the lush, bone-adorned attire of the drumhunter warriors of Naya, to the salvaged gas masks of the gaunt barbarians of timerift-era Dominaria, to the opalescent Neurok serum-tank helmets of Mirrodin, costuming communicates a world's meaning loud and clear.

A couple of quickies this time.

Regarding your article "The Journal of Javad Nasrin": I understand Zendikar has many dangers, and that adventurers have access to gear to help them. I find it so interesting that the equipment parallels the adventurer's tools. The Blazing Torch is just full of flavor, scaring off vampires and zombies. Most of the other equipment attempts to reflect what it is or is used for, which is neat. When I see Trusty Machete, I feel it would have made sense to give the creature protection from Plants, or interact with Plants in some way. It would have been a small impact in game terms, but create an even greater "feel" to the flavor of the card. After equipping the Machete you could just imagine your creature cutting through any vines, brambles, and roots to get to his destination. I just feel you missed a great opportunity for flavor that is all.

Noted! A little interaction with the Plant subtype would indeed have been pretty adorable.

So I think it's pretty cool that vampires are getting a little tribal love. And Bloodghast is clearly a nutty good card. But what's happening from a flavor perspective here?

It's a vampire, so presumably when your opponent is bleeding (i.e. down to 10 life) it goes into a kill frenzy (i.e. has haste).

And obviously it's a spirit, so it can come back from the grave...

The landfall trigger has me troubled though... Why would creating a new mana bond or finding a new land cause it to rise from the grave? Is it the same Bloodghast recurring over and over again, chasing your opponent even if he flees to new lands? Or is each recurrence a different vampire's ghost, rising from the dead as your enemy stumbles across the dangerous lands of Zendikar trying to evade you?

I hadn't considered your explanation of finding new vampiric ghosts every time you explore a new place—that's a neat one. You finally manage to banish one bloodsucker's restless soul, and poof, there's a new one in the next county over. Man, these marsh areas are lousy with ghost-vamps! No, I thought of it as the same Bloodghast popping up again and again, but admittedly that makes the flavor a little less clear. I think of it as a ghost that moves to haunt a new region every time it's vanquished. You kill ol' Ghasty and he just heads off into the wilderness, setting up to make yet another ectoplasmic ambush. When you explore the next region of Zendikar, there he is again, ready (sometimes really ready) to emerge once more and drink the blood of the living. Also, he can't block he's so enraged by the pain of his ghostly torment—or maybe for development reasons.