Seven on the Seven

shuffled my brain for a while, and now I am fanning out seven things before me, the seven things I have to tell you about opening hands.

Let's say your deck is comprised of sixty distinct cards. How many different opening hands are possible?

Keep going. You're not even close yet.

By your tone I should probably skip an order of magnitude, but—ten million?!

There are over three hundred million different opening hands of a 60-card (singleton) deck. (Assume different basic lands count differently. Maybe you got them all signed by their respective artists.)

This is a big number. If you saw one new possible hand flashed at you every second, it would take you over twelve years of nonstop hand-flashing to see them all.

Kinda wish ... I had decided all those years ago ... to run Gideon over Baneslayer ...

If you had every man, woman, and child in the United States write one of those possible hands on their foreheads, you would (at this writing) still need another few dozen million people from other countries to lend a writing surface.

If you had a dollar for every one of those opening hands, lunch would be on you.

When we build worlds from scratch to play host to Magic blocks, we come up with piles of detail. Artists and writers work for months to forge all the detail of the world. The Scars of Mirrodin style guide has over eighty pages of concept illustrations and over 15,000 words of text. That's a lot to take in.

In fact, it's too much to take in. If we were to introduce you to the world by starting you on page one of the style guide text, you'd be overwhelmed. There'd be no surface to get your brain hooked into. You need to edge into something like that, let your mind absorb a bit of it at a time, and move through it as you build a contextual framework for it. 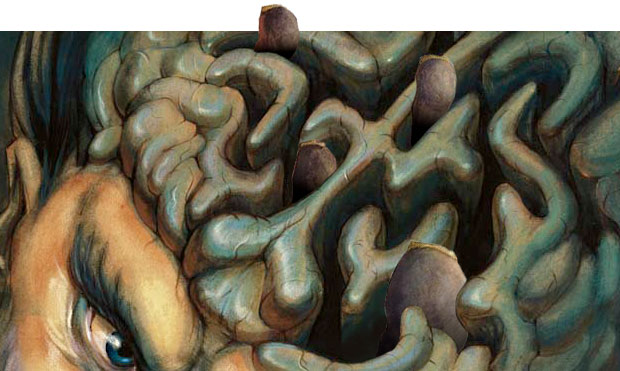 Learning a new deck is the same way. Sixty cards (or seventy-five, or a hundred, or 250) makes for a lot of combinations (see the first section of this article).

I think of the opening hand as a kind of funnel. (Aw yeah, I'm hot on metaphors today.) It's a way to experience a deck or a setting through a restrictive window (woo), letting you dip your mind-toes (nailed it) into the uncertain waters. You get to group the contents of your opening hand together however it feels right to you—lands over here and spells over there, maybe, or grouped by color, or sorted by mana cost, or in some sort of storyline-based chronologic all your own—and you can begin to own it.

THREE: Other Kinds of Openers

I've talked about how, in flavor terms, the hand is your conscious attention, the collection of spells and mana-bonds you have in your short-term memory at a given moment. It's your mental storehouse of spellcraft, the arsenal you have at the tip of your tongue.

The opening hand is the first seven items that occur to you when you begin a duel with a planeswalker (or a mass melee with several planeswalkers). That has interesting implications for flavor. 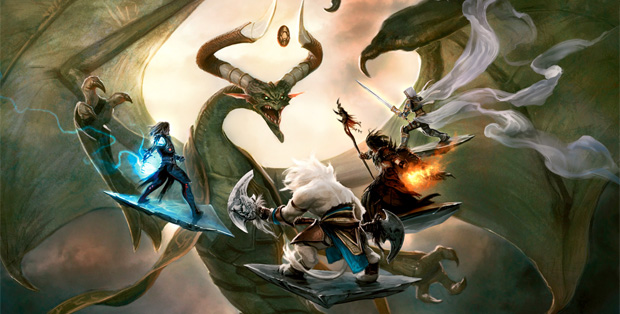 It means that typical Magic games represent a certain kind of planeswalker duel. In a Magic game you start with a naked battlefield and a randomized subset of your library in mind. And this might represent a common way for planeswalkers to fight; in the heat of the moment, planeswalkers probably would only have time to call up a random assortment of spell knowledge before the fight started, and planeswalkers often travel light (meaning they don't generally have a bunch of pre-summoned drakes and elementals and Wild Evocations lying around). But there must be many more possible ways for two mages to have a knock-down-drag-out. There could be unfair fights where one fully-prepared mage attacks one who just wandered out of his sanctum. There could be huge clashes where two mages had already summoned legions of creatures and meet on a fully-loaded battlefield. There could be carefully-crafted battles of wits in which the mages prepare specially-selected seven-card arsenals just for the occasion.

And we could certainly construct Magic play variants that mimic these other types of planeswalker battles. When we play regular-style (i.e., generally the most fair and fun type of) Magic, we're simulating a particular type of duel in the Multiverse.

Stories are sequential. They rely on events playing out in a particular order so that actions have consequences, tension and action can climb the plot mountain, and the ending can happen before the beginning.

Cards—in opening hands, for example, or in booster packs—are randomized. There's no control over what card you experience first, or what other cards are thrown in alongside it. When you see a particular card, there's no way for us to guarantee that you've read a novel, or seen our website, or checked out our comics, or kept current with the planeswalker characters.

That's why we believe that chronological stories don't play out well on cards. They don't have space to establish context, and we can't guarantee that you already know what needs to be known for an ongoing story to make sense. 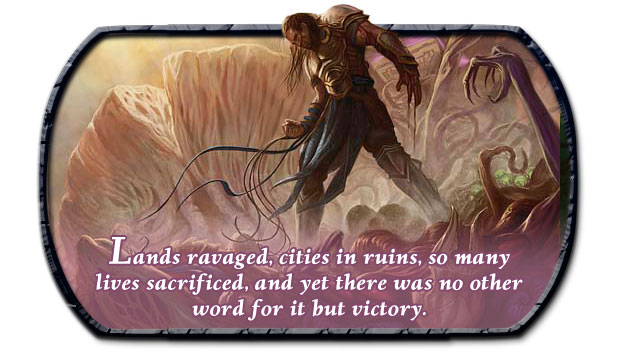 But that doesn't mean that no story content works on cards. Snapshots work better: a piece of flavor text or a piece of art that captures a dramatic, self-contained moment in the story is a great, flavorful feature of a card. It's our challenge to deliver, when appropriate, a satisfying chunk of lore that's perfectly tailored to the card-sized, randomly-sorted medium.

When I woke up this morning, my head was a jumble of useless garbage. It was snippets of thoughts, including some sleepy (and wrong) math on how many hours I had slept, some lame joke I heard on Chelsea Lately the previous night, and part of a stress dream about a cat. That was not a particularly useful frame of mind.

In order to get organized for my day, I had to shake these stray neuro-patterns and replace them with grown-up thoughts. Shower. Make breakfast. Commute. Write Savor the Flavor. 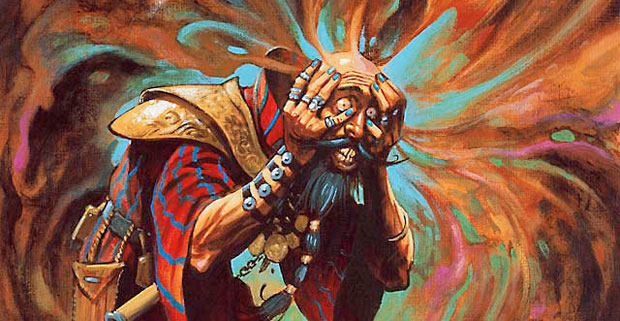 Doug has a case of the Mondays.

The mulligan is the game equivalent of this cobweb-clearing head shake. When a planeswalker duel breaks out, and the starting gun goes off, you don't always have a reasonable combination of thoughts in your head. You might recall a few mana-bonds (lands) that don't actually match up to the colors of the spells you have in mind, or maybe mana-bonds are all you can think about. Before the action starts, you need to wipe that weirdly fixated mind of yours clean and grab a new brain-full, hoping that it's better than the first one.

Shuffle your deck. I don't care which one—just whatever one you have lying around.

Now focus on a question. It should be some issue about the future that you're unsure about. Through the power of prophecy, your deck will tell you the answer (actual cards from the Prophecy set not required). Will I get that job I want? How should I ask that person out? What does a sample hand of this deck look like? That sort of thing. 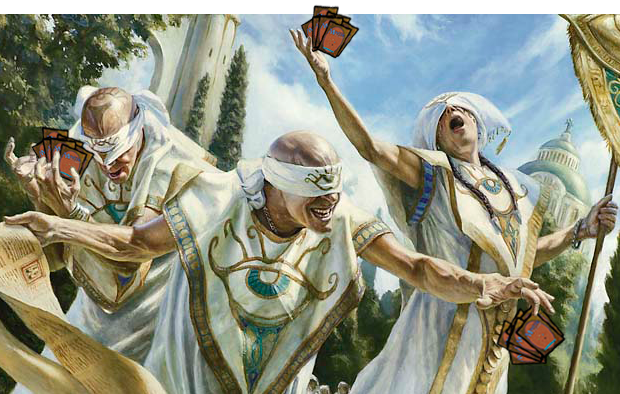 Flip the top seven cards up one at a time. Remember, they have powerful meaning! Focus on each one carefully, using the art, card concept, name, and everything else about the card to guide your thoughts and help you unlock the mysteries of the world. I find it helps to hum the theme to Three's Company as you turn over the cards.

There you go. Issue resolved, question answered—through the power of a Magic opening hand.

Note: actual prophetic power not guaranteed. But if this actually does something for you, click the email link below and let me know.

Back in my web developer days, I wrote the Sample Hand Generator, a little AJAX web app that shows you randomized opening hands from magicthegathering.com deck lists. I suggest you take a stroll through the Daily Decks archive, and whenever you find a deck that interests you, click the icon in the upper right that looks like this:

Go; click. Generate some opening hands. Draw a few more cards off the top with the "draw card" button. Explore one of those three hundred million or so possible combinations. Enjoy the feeling of the freshly-fanned opening hand.

I got an entertaining number of cuss-outs about Sorcerer's Strongbox, as I revealed last week that it was my design and invited scorn for those who had missed flips or disliked coin-flipping cards. A representative sample:

YOU are the one responsible for Sorcerer's Strongbox??? Curse your name for the eternities!! There should be NO coin flipping in Magic! This isn't [a card game for kids]. Curse you!
Flip a coin: Heads, you win the game, Tails you lose the game. NOT FUN
--Kyle 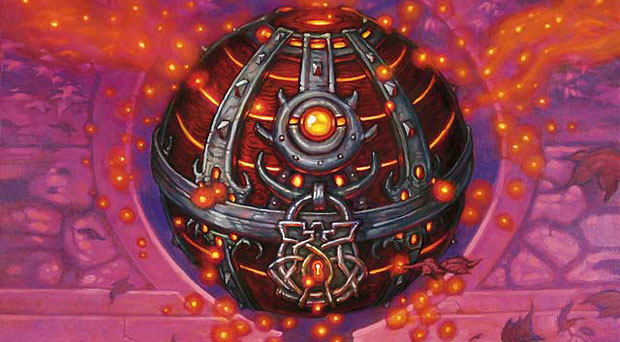 Thanks, Kyle and the rest of you, for those curses! I love a bit of randomness now and again, especially when the frustration is flavorful, and I love impassioned feedback.

"This allows you to pump [Gaea's Revenge] with green magic if you want--but it's a nature elemental, so it disdains picking up a piece of Equipment."

Well, except for Behemoth Sledge. I guess it's an elemental elephant :)

When a character on a card has been concepted as a female, its art is female, and the flavor text is female, and yet some players refer to the card with male pronouns, does it bother you?
--Abe

I'm cool with it—on the surface. Inside, I boil with the heat of a thousand volcanic infernos. Yeah, it kinda bugs me. Noble Hierarch is female, people! I've even heard Chandra or Elspeth referred to with masculine pronouns. "Lightning Bolt you, redirect the damage to him." Sigh. I try to gently correct those people, but without being a jerk about it. Lead by example, my fellow Vorthoses (and even accuracy-obsessed Melvins)—the others will learn eventually! 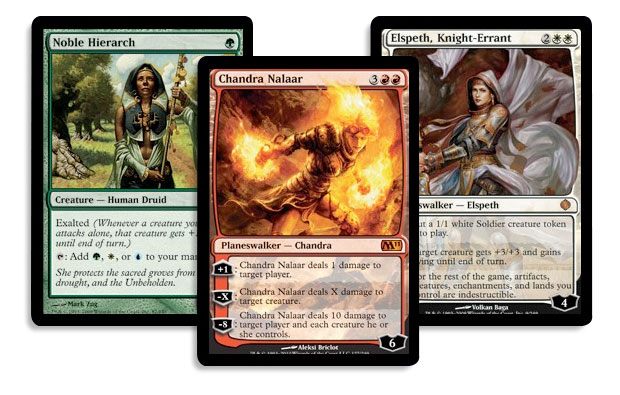 Tune in next week for (if all goes according to plan) an article from my Creative teammate Adam Lee!