Six Secrets Behind the Sets

ard art can provide snapshots of the visual aspects of a setting, but. Card names and flavor text can let you in on the language of a world, but. Articles can explore the design stories behind the creation of the set, but. There's always a "but," because there are always limits to the world detail that rectangular pieces of cardstock are able to communicate, even with the aid of web columnists filling you in every week.

Beyond Mephidross Vampire, the first Mirrodin block didn't highlight the vampires of Mirrodin much. When we returned to the plane with Scars of Mirrodin, we had an opportunity to revisit Mirrodin vampires and we were able to spend more time giving the bloodsuckers a more robust, consistent look. 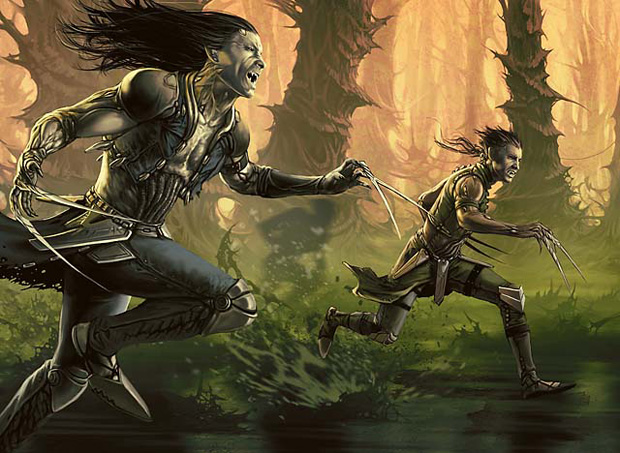 Mirrodin vampires have slightly fanged canines, but their fangs are not their primary means of ingesting blood. These vamps' middle and ring fingers have elongated metallic spines that they use to puncture their victims and drain blood. You can see these syringe digits on cards such as Bleak Coven Vampires and Go for the Throat. 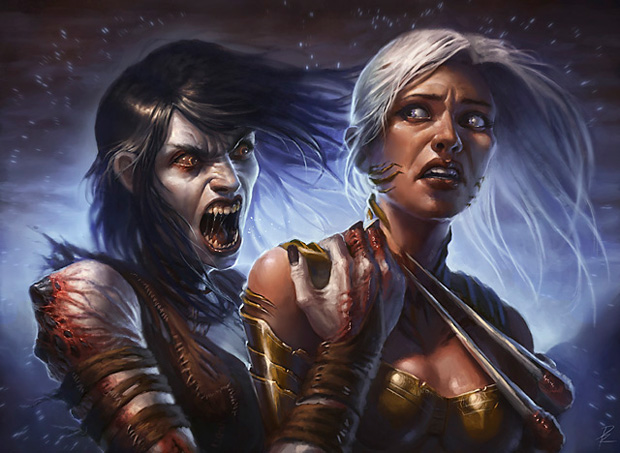 Go for the Throat | Illustration by David Rapoza

In this concept art (and in the art of Bleak Coven Vampires) you can also see some of the metallic "ductwork" that replaces the vampires' digestive system. A system of blood conduits inside the vampire's body channels and distributes blood from the entry point of the syringe digits to the rest of the body. 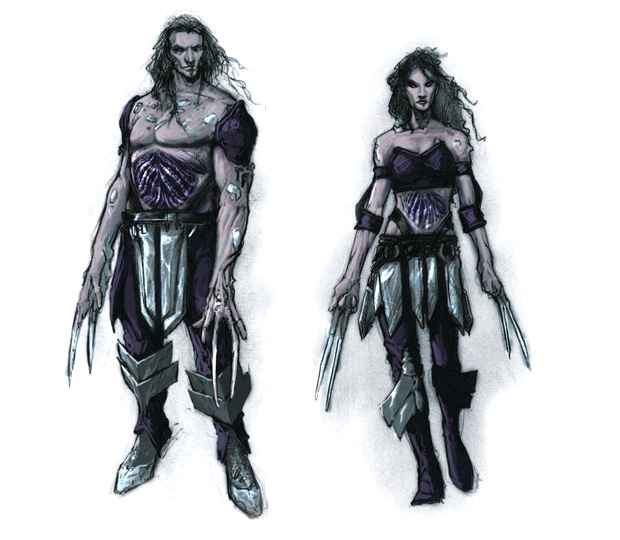 The second set in a block uses the first set's basic lands—that's a rule. Here's another rule—we enjoy breaking the rules. Mirrodin Besieged doesn't follow the usual basic land trend; booster packs of Besieged feature newly illustrated basic lands that are unique to Besieged. Why? The quick answer is: to show the changes to the landscape between Scars and Besieged.

Basic lands are in front of you almost all the time you're playing Magic, and land art is one of the best ways to show change in a setting on a mass scale. We love to use basic lands as an ever-present, rich venue to reflect what's going on in the story and hint at how it's affecting the setting itself. The art of the Scars of Mirrodin basic lands already creates a four-land panorama for each basic land type (the four different Scars Plains line up together, as do the four Scars Islands, etc.). And the basic lands of Mirrodin Besieged take it up to six.

You may have seen on the Mirrodin site how the Mirrodin Besieged basic lands take the original panoramas even further. (Use your mouse to scan far to the right and left.) We asked the same artists to extend their four-land panoramas by two additional pieces. We also asked them to show how Mirrodin's lands have changed as Phyrexia's influence has spread. You can see how the two James Paick Plains in Mirrodin Besieged are gloomier and shot through with rotting cracks, with blackened razorgrass obscured by a smoky haze. Tomasz Jedruszek's Mirrodin Besieged Mountains have become pitted and spiny, revealing ichor-stained pillars and riblike curves of iron. The effect when you open a pack of Mirrodin Besieged is subtle, but it contributes to the feel of a major advancement of Phyrexian corruption.

Each of the five Scars of Mirrodin Trigons is an artifact that comes with three charge counters. Each has an ability that requires those charge counters and an ability to fuel them back up with colored mana. For the art of all five, we commissioned art that shows a humanoid hand holding a three-sided object—you can see the claws or paws of Trigon of Mending, Trigon of Thought, Trigon of Corruption, Trigon of Rage, and Trigon of Infestation. 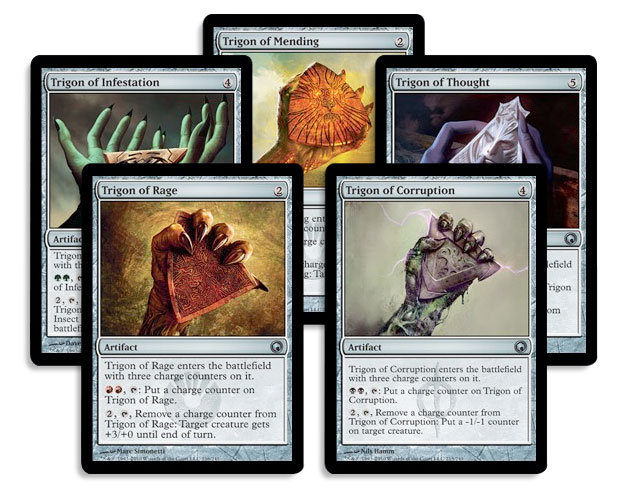 But we commissioned one more—a sixth piece, depicting a "colorless" three-sided artifact in the hand of a metallic golem. That was the art for Tumble Magnet. Although the Scars designers didn't consider Tumble Magnet the "colorless" member of the Trigon cycle, it did have a few properties in common—three charge counters, and a use for those counters—and so we linked it up creatively. Ultimately, though, Tumble Magnet was seen as different enough that it would be misleading to call it a member of the Trigon cycle (it was common instead of uncommon, and didn't have a "charge up" ability). So its "Trigon" badge was revoked and it became Tumble Magnet instead. 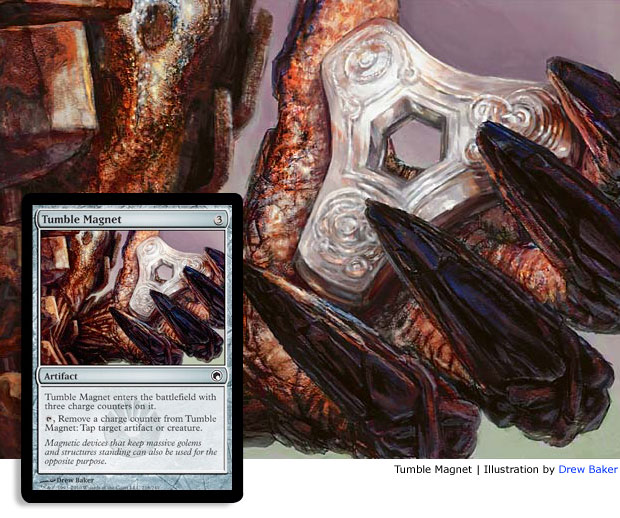 Marc Simonetti's art for the Mirrodin Besieged card Viridian Claw depicts a Viridian elf native to the Tangle wielding an ornate, clawlike, copper-bladed hand weapon. The art was actually commissioned during Scars of Mirrodin, with the intention of putting it on an Elf creature card rather than an Equipment. But then Scars of Mirrodin didn't have a home for Simonetti's piece; many of the elves in Scars needed to have a Phyrexianized look, or otherwise had some mechanical hook that didn't fit with the piece. So the piece chilled out for a bit while we searched for a place for it to inhabit. 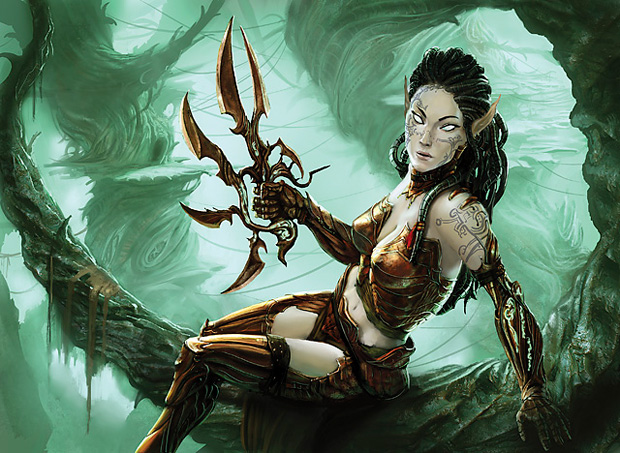 It turned out that a "+1/+0 and first strike" Equipment from Besieged was the best place for the art to make its home. Although the art mainly depicts a Mirran elf, her claw weapon is prominently showcased in the piece, and it fit the "swift, small weapon" feel of the mechanic nicely.

Someone on the Phyrexian side must have been tired of getting attacked by a huge green Beast—but the Fifth Dawn kind, not the Scars of Mirrodin Alpha variety. The art of Spread the Sickness depicts the corpse of a slain Tyrranax, its body leaking black ichor. 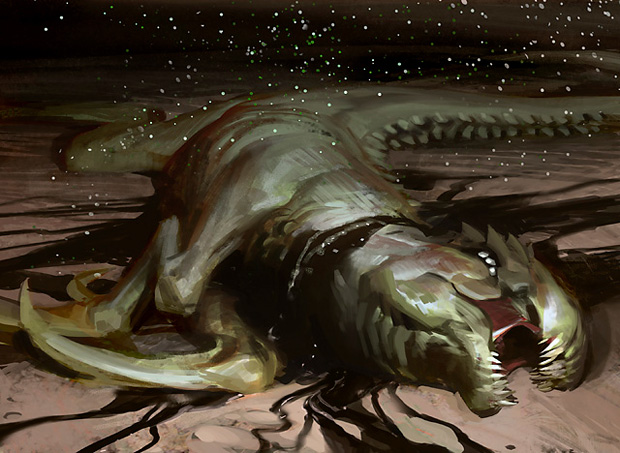 The front limbs of the slain Tyrranax are more like those shown on the Tyrranax. Scars of Mirrodin's 6/5 monster Alpha Tyrranax has similar arm bone structure, but its arm ends in an actual articulated claw with one downturned blade rather than a single scythelike appendage.

The tiny dots in the art of Spread the Sickness are actually pistus flies, which (as I explained in an earlier article) are mosquito-like insect-things. Pistus flies spread the Phyrexian contagion by feeding on infected hosts, which indeed (thanks to the proliferate mechanic) is what's happening here.

The spells of the Mirrodin Besieged Zenith cycle are reminiscent of the cycle of Fifth Dawn Beacons; they're all powerful sorceries and instants that get shuffled back into your library instead of trundling off to your graveyard. But there's also a flavor connection. Where the five Beacons depict the eruption of mana at the five lacunae, the five Zeniths each show one of Mirrodin's suns cresting above a prominent Mirrodin landmark, and each of those landmarks are in turn depicted on the cycle of Mirrodin artifact lands. Finally, the lacunae in the Beacons are housed inside the structures shown on the artifact lands. Here's the breakdown in detail:

The White Sun's Zenith is shown over Taj-Nar, the capital of leonin culture, originally depicted on Ancient Den. 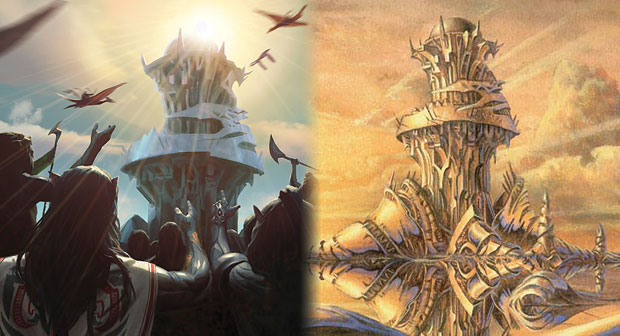 The Blue Sun's Zenith is shown over Lumengrid, the city in the Quicksilver Sea occupied by vedalken and Neurok humans, originally depicted on Seat of the Synod. 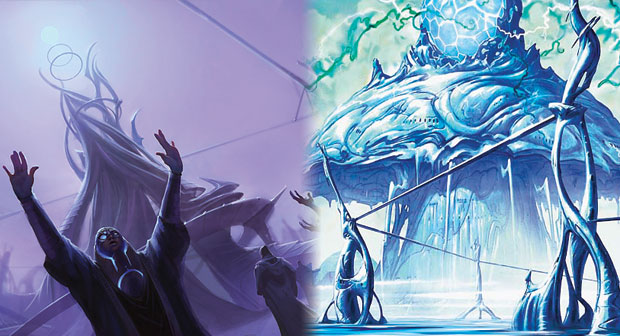 Seat of the Synod | Illustration by John Avon

The Black Sun's Zenith is shown over Ish-Sah, hub of the Mephidross and stronghold of Geth, originally depicted on Vault of Whispers. 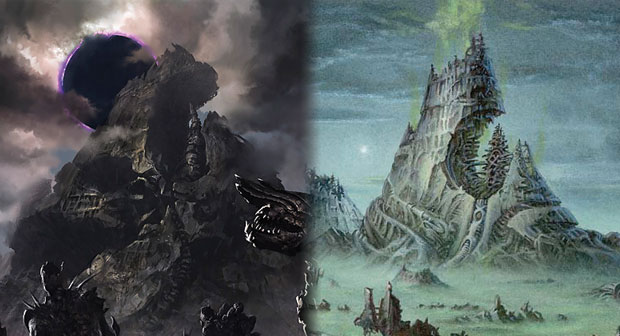 The Red Sun's Zenith is shown over Kuldotha, a forgelike city sacred to Mirran goblins, originally depicted on Great Furnace. 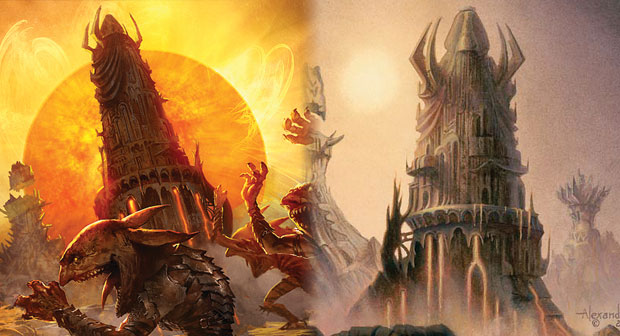 The Green Sun's Zenith is shown over Tel-Jilad, a huge copper "tree" in the Tangle that is inscribed with Mirrodin's history, originally depicted on Tree of Tales. 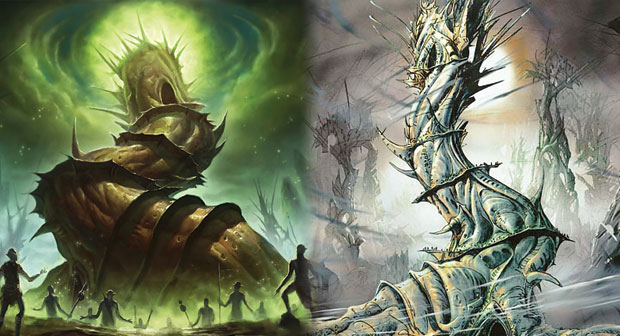 That does it for today's six secrets behind Scars of Mirrodin and Mirrodin Besieged. But obviously the block's not over—there are a few secrets still to unveil.

Today's letter comes from Jon, concerning the art of Flayer Husk and the size of germs in general.

I never noticed Flayer Husk was a hand before! This begs the question, how big are these germs, how big is the hand? Obviously Bonehoard is quite large, or at least can become so after consuming or adding to itself dead matter. So, how big are the germs, and how big is the actual hand that the germ is in, in Flayer Husk? It seems like it could either be a hand like for a Blightsteel Colossus or for a Flensermite.
--Jon

As you point out, Jon, the art of the living weapon artifacts lack sufficient size reference for us to be able to determine the scale of those creepy little Phyrexian embryos known as Germs. Flayer Husk might be a humanoid-sized hand, meaning that Germs are dinky little tykes, but without being able to compare Flayer Husk to a creature of known size, it might well be a massive, giant-sized claw. Furthermore, it's not clear that all Germs are the same size as each other; one removed from incubation to be inserted into the wrist socket of a Flayer Husk might be smaller than a Germ that's destined to be bound into a Strandwalker. 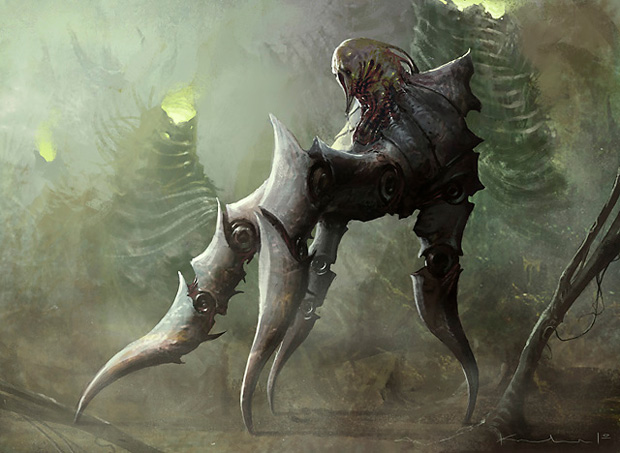 However, you might want to check out the wallpaper of Elesh Norn, Grand Cenobite that has cropped up on the Mirrodin site recently. Head to the Phyrexian side of the Plains, and scroll to the right. Find the hotspot for Elesh Norn, open up the wallpaper, and check out her hands. Interesting. The artist for both pieces was the same—Igor Kieryluk—and the jointed structure of the hand is almost identical. Does this indicate some body-part standardization by the Phyrexians? If so, is Elesh Norn human-sized, or is she the size of a giant, indicating that Flayer Husks are quite large? Is she wearing a pair of Flayer Husks, or are Flayer Husk living weapons made from pieces of beings like her? To Phyrexia, are those questions interchangeable? 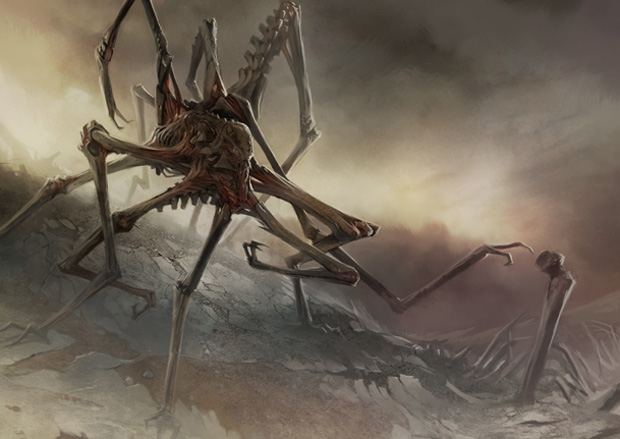 It may well be that Germs are different in scale from one another—after all, the artists who painted the various living weapon artifacts only had a few sentences of description to go on. Besides, the Phyrexians aren't assembly-line workers; they're creating (what they see as) perfect forms. They create body parts (and Germs) to specifications. But still, even in the absence of height information for Elesh Norn, I suspect that Germs tend to be larger than Flayer Husk might suggest. Check out Bonehoard, and compare the Germ's face to the size of the femur it's reaching for. If that femur is humanoid or even goblin-sized, then Germs might come in sizes as big as a human skull. So Flayer Husk is probably a good bit larger than a human hand. If you saw it skittering toward you, you'd likely score a hefty number on the Freakometer.