ntire mortal lifetimes have flitted by since the last time Sorin Markov returned to the world of his birth. He has spent bemused centuries roaming the Multiverse, stopping by Innistrad only when it suited his whims, his thirst for world-spanning travel enabled by his vampiric longevity.

But now he returns to find his homeworld devouring itself. An angel's disappearance has not only endangered the humans of Innistrad, it has smashed a carefully-constructed balance between humanity and the creatures of the night. Sorin knew never to expect peace and harmony on this shadowed world, but he thought he had arranged a kind of effective equilibrium, a set of safety measures designed to keep one side of the scale from tipping too far. 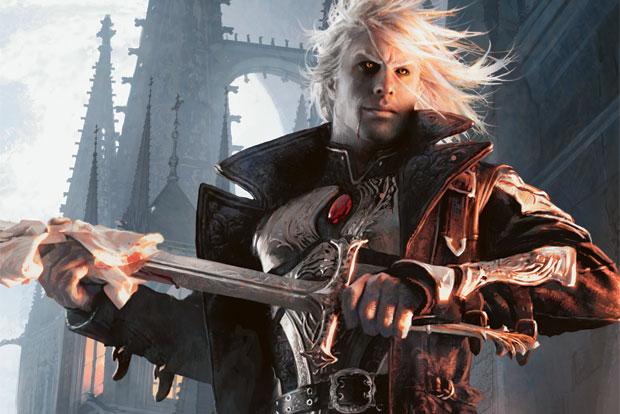 But the prodigal vampire returns to witness his blood-feeding kin killing humans at will, werewolf howlpacks preying on the priests and cathars meant to ward them off, and rotting ghouls mounting a siege on the very walls of Thraben. The balance has been lost. Old memories resurface, and the ancient vampire draws his sword under the light of a grim moon. All this was not meant to be.

Centuries ago, Innistrad faced a similar crisis. With a single act of magic, Sorin created a safeguard, a rallying symbol that would struggle to govern the balance between Innistrad's monstrous forces and its humans. He made sure that most humans would have a weapon against the werewolf's curse and wards against the hauntings of geists. His safeguard would ensure the undead ghouls and skaabs would not overwhelm the world. He even betrayed his own vampire brethren to make sure the blood-feeders would never hunt humans to extinction and the demon lords would never triumph over the plane. 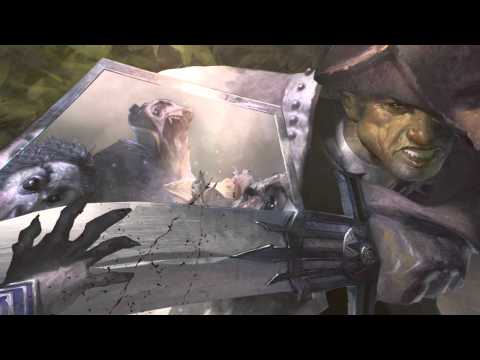 This paragon of protection would be Sorin's weapon against an undying darkness, an eternal judge who would fight for the meek and work to sustain life on Innistrad. .

The vampire Sorin Markov, the self-serving aristocrat who was once drenched in privilege in his role as the favored lord of Markov Manor, created Avacyn, the angelic champion of the meek and divine source of the protective power on Innistrad.

How did this come to be? 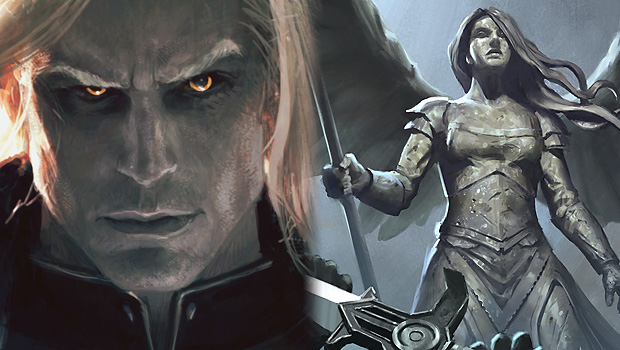 To understand that, we have to learn about another member of the Markov family—Edgar Markov, Sorin's grandfather.

Thousands of years ago, before there were vampires on Innistrad, Edgar Markov was an alchemist in the land that would become Stensia. Famine was sweeping the land, and the old alchemist Edgar searched for a solution that could help the starving families feed themselves. The answer was a brutal one: to undergo a blood ritual that would cause some of the people to feed on blood. It would provide sustenance to those few, reducing demand for the failing crops, but it would also cull the overall population, reducing the number of hungry mouths to feed.

Thus were vampires born on Innistrad. 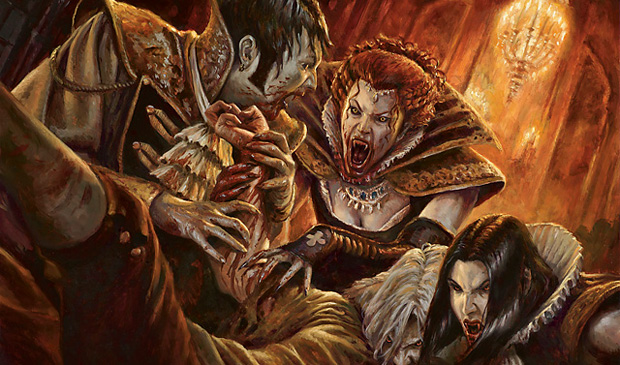 But Edgar Markov's chilling tale has an even darker truth behind it. The famine was an expedient excuse for Edgar's blood magic, but in truth the aging alchemist was experimenting with ways to achieve agelessness for himself and his only grandson, Sorin. A demon called Shilgengar preyed on Edgar's ambition and whispered secrets that would point the way toward Edgar's blood-feeding experiment. Shilgengar also helped the old man overcome his squeamishness at what must be done. Still, Edgar needed prodding for him to go through with the ritual to create the blood-feeders.

And that's when the famine put him over the edge.

Either way, it was the genesis of this world's vampires. With his blood magic experiment, Edgar succeeded at finding a way to extend his own life. He anointed Sorin with the same vampiric state—and shockingly, his grandson disappeared.

The trauma of the transformation had caused Sorin's planeswalker spark to ignite.

Sorin was a planeswalker now, but he was also the grandson of the honored progenitor of the entire vampiric race back on his home plane. As the Markov bloodline spawned other bloodlines, Edgar remained the prestigious forefather of all vampires, and Sorin's "life" became like that of a royal.

Over the centuries, as vampires spread further into human lands, Sorin spent more and more time away from his homeworld, sometimes disappearing for years at a time. Vampires became disdainful of the race from which they had spawned, hunting mortal humans more and more boldly, and Sorin became distant from his own vampire-kind.

But Sorin always kept watch on Innistrad. From his world-hopping perspective, he could see the changes on the world of his birth. He saw that as vampires gained in power, the human villages were dwindling. Although he was no longer human himself, he saw the curse his grandfather had brought to the humanity of their world, and he saw that in time, they would be wiped out by the blood-feeders. 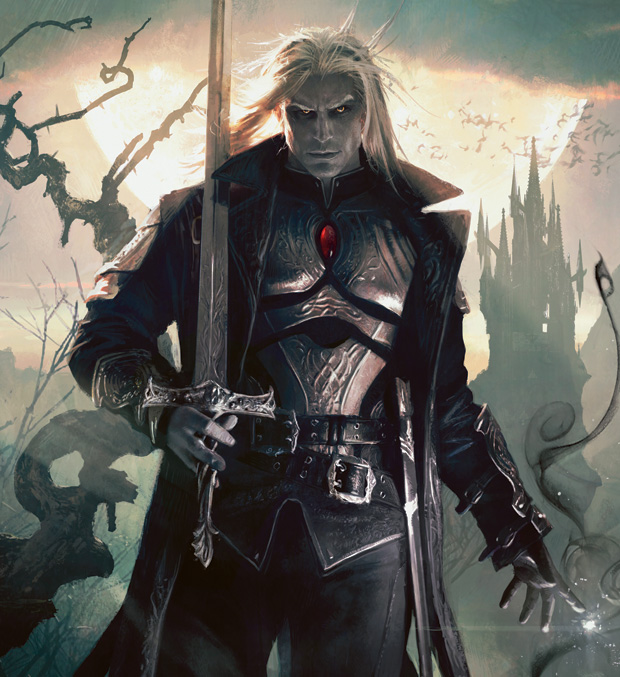 Sorin borrowed from long-held beliefs about the moon and the afterlife, forging a warrior who could hold back vampires and other monstrous forces that would extinguish life on Innistrad. He created an angel he named Avacyn and tasked her with protecting the plane. Through her, the magic of faith would create true power to fend off the darkness. The Church of Avacyn grew up around the power Sorin invested in her.

Some of the vampires understood Sorin's act, but most reviled him as a traitor. Edgar still lives in Markov Manor to this day, and to this day Sorin is not welcome there. Avacyn was Sorin's gift to his home, but she was also his betrayal of his own people.

But now Avacyn has disappeared from Innistrad. How could this have happened? Sorin has always had a dark edge to him, and he has never hesitated to destroy anyone who got in the way of his ambitions. But at the same time, he never meant these shadows to rise over the world of his birth. Sorin might be his grandfather's creation, but Sorin's own creation was meant to preserve a way for humans to survive Edgar's crime.

And now, after Sorin's long absence, it is the disappearance of that creation that has called him home again.

Ready for the new Sorin that you can find in booster packs of Dark Ascension? It's time to reveal this prodigal Markov step by step.

Quite the stirring name. The name is a nod to Sorin's past on this world and to his influence over its history. Despite his being cast out of Markov Manor, Sorin still bears the title of "lord" whenever he returns to Innistrad, his childhood home. These days, few would recognize his claim to rule much of anything. He's been an absentee lord, a once-promising vampiric aristocrat who has passed into memory as his planeswalker nature became more important than his planebound duties.

But even though Sorin has spent much of the last few millennia exploring the Multiverse on his own whims, Sorin still feels the tug of—something—when he considers his home plane. It's not exactly responsibility. It's not exactly a sense of community. Those terms tend to become meaningless to a millennia-old creature capable of traipsing at will between the planes of existence. But when he sees what's become of his first plane without his creation Avacyn, a feeling rises in Sorin that is akin to regret, which bears a family resemblance to something we might call duty.

Sorin is white-black in this set, representing this sense of conflicted obligation. Sorin is still a vampire, and still would be regarded as a monster to any Innistrad human. He still pursues his own ends without a care for the ephemeral institutions of any world or society. But when he's here on Innistrad, he feels the weight of the pain and bloodshed his family has caused, and he still stands by his ages-old decision to aid humanity. He's a privileged lord of Innistrad, but his position of power is bounded by a certain unwillingness. He refuses to let the shadows overwhelm the people of this world, to leave his home without protection from his own kind. 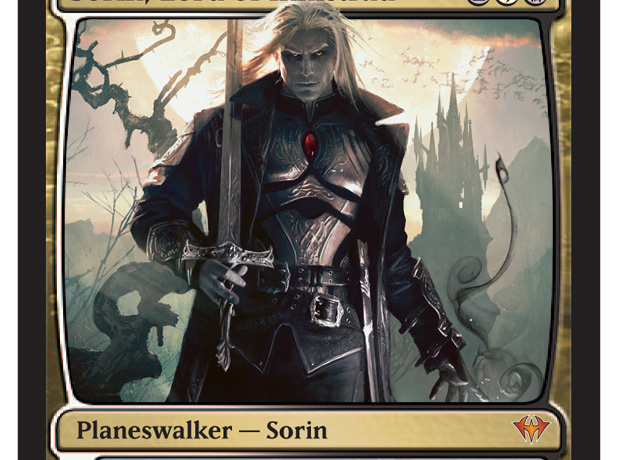 To that end, Sorin is not afraid to take up arms. His weapons in this battle are those he was graced with as a vampire thousands of years ago: an aura of authority and position, which he uses to gather vassals and inspire servitude; irresistible charisma, which he uses to reinforce those under his sway; and, what is perhaps his most potent weapon, the ability to sire new subservient vampires, which is often Sorin's preferred method of dealing with his enemies.

Sorin gathers vampiric minions as his +1 ability. This is the first planeswalker in Magic that creates a lifelink token, and the effect can be powerful. If Sorin is under siege, you can have him protect himself with his army of Vampire tokens. If not, you can shift into offensive mode with a force that is very good at racing, especially in great numbers or while wielding equipment. They get even better when you consider Sorin's second ability.

In his battle against the predatory forces of Innistrad, Sorin drops emblems that act like anthems. That trickle of Vampire tokens can turn into a scary, lifelinking force with this unending, undisenchantable +1/+0 tacked on. Those emblems can give weenie or token-swarm decks a way to create massive life swings whether or not Sorin himself sticks around. When a Lord of Innistrad gives the order to charge, creatures charge.

What's truly shocking is Sorin's ultimate. Want to see Sorin use those fangs to extend the Markov bloodline?

I'm warning you. This is Sorin when he is in .

There you have it. This new white-black Sorin is back to his home plane and he's looking to take the fight to the streets. With growing ranks of blood-feeders at his command, he'll battle back the shadowy forces rising around Innistrad. If he can't solve the mystery of what happened to his archangel creation, or perhaps even if he can, I'd wager a lot of people are going to meet swift ends.

All that remains is the mystery of Avacyn's vanishing. Tune in next week, fellow flavor fans, and we'll unlock some secrets about just that.