The Tale of Tuktuk

he Eldrazi have recently risen, but their presence has affected Zendikar in subtle ways for thousands of years. Tendrils of their incomprehensible energies have slunk into certain dark crannies of the world, making the plane even more dangerous than the savage tales would have you believe. Long before they blotted out the sky with their mighty forms, the Eldrazi cast a shadow that spread upward from below.

Zendikar is scattered with ruins, many of which have become tainted by the slumbering Eldrazi. Dark catacombs twist under the earth, leading down into realms never touched by light. Vaults rimmed with jagged stairs spiral down into maddening, song-whispering depths. Diamond-shaped hedrons, the magical "bars" of the Eldrazi's planebound prison, pepper the plane in Roil-flung disarray.

Before the rise of the Eldrazi, few of the denizens of Zendikar had managed to learn much about the mysterious hedrons. Tomb robbers looted and sold them as treasure. Goblins chipped away at them, trying to crack open the purported goodies inside (but usually finding Runeflare Traps instead). Even Hedron Crab gathered them to decorate their shells.

Although the hedrons were created to trap the Eldrazi, over the millennia a peculiar bond developed between monstrosity and stone. As the Eldrazi tested the bars of their prison, the hedrons took on some of the dread energies of the Eldrazi themselves, like statues worn bright by oily hands. Today, many hedrons have an intimate connection with the Eldrazi monstrosities and their brood lineages of Eldrazi drones and spawn. Sometimes hedrons deep in underground ruins resonate so strongly with Eldrazi magic that some sensitive souls report hearing cryptic whispers from the stones.

One of these sensitive souls was a goblin called Tuktuk.

The Tale of Tuktuk

Zendikar's three main goblin warrens are the Grotag, the Lavastep, and the Tuktuk. The Tuktuk are a young tribe, having formed around fifty years ago when their leader returned, in a manner of speaking, from a life-altering expedition.

Thing is, the Tuktuk tribe's leader is not exactly a goblin. For the goblin who was called Tuktuk is long dead.

Tuktuk the Explorer was an adventurous goblin, brave for his kind and curious, always willing to venture deep into the vaults and chasms where Zendikar kept its best shinies. He wasn't a particularly remarkable fighter or a particularly charismatic leader, but his curiosity burned like pure flame. He was also very, very dumb.

Tuktuk knew the only way he would earn respect in his tribe was to capture a treasure like no other ever found. Vowing to return with the most amazing artifact goblinkind had ever seen, he ventured into an unknown, famously dangerous ruin—because remember, he was very, very dumb. 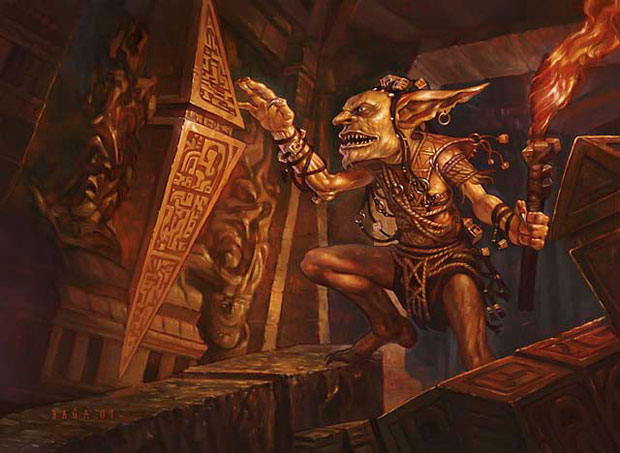 The ruin Tuktuk chose had been polluted by thousands of years of Eldrazi influence. The walls were crusted with unnatural rock formations that mimicked the carvings of hedrons, and the air was sodden with the soundless utterances of ancient monstrosities. Tuktuk was afraid, but he trundled on, his bravery reinforced by his tragic stupidness.

As soon as he found his prize, Tuktuk was promptly killed. He discovered a massive, profoundly powerful hedron fused into the cavern wall (unluckily), touched it (stupidly), and triggered an ancient rune-trap (inevitably). The trap exploded with dark energies, rupturing his skin and fragmenting his bones—but also setting free a measure of Eldrazi magic. And what happened next was most strange.

The mystical hedron trap, designed to protect the integrity of the ruins, struggled to replace what had just been lost. The Eldrazi-soaked magic drew stone from the walls of the ancient chamber, fusing it together and forming it into a roughly humanoid shape. What resulted was massive and powerful like a stone golem, but bore a strange resemblance to the dead goblin interloper. Although Tuktuk's guts were splattered around the cavern, his mind and memories became trapped within the stone, giving it goblinoid form—and mingling Tuktuk's mind with ancient Eldrazi magic.

The stone creature that resulted was not Tuktuk. But in a way, somehow, it was. 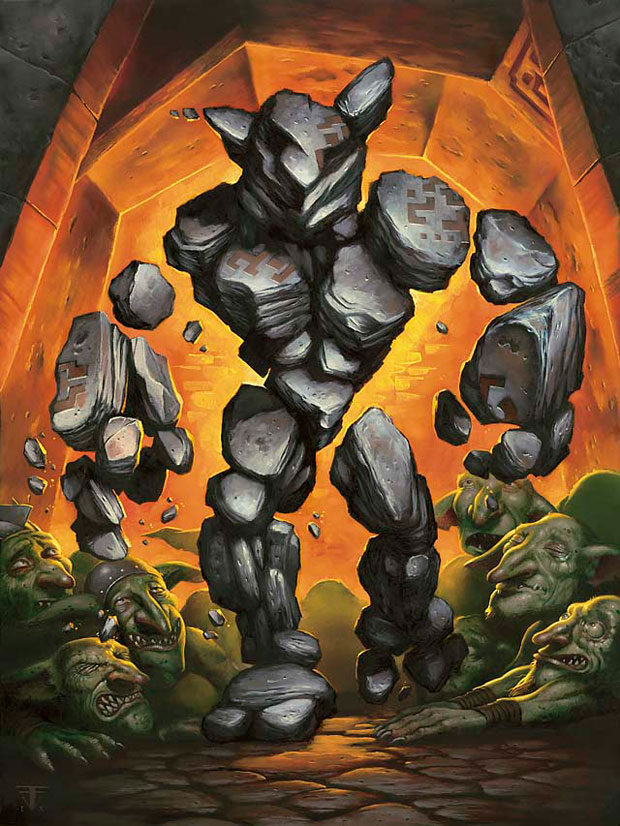 When the golem-goblin emerged from the ruin, his new, daunting form amazed and enthralled his tribe-mates. They marveled at his formidable form, his dauntless bravery, his muscles made of pretty stone artifacts. They dubbed him Tuktuk the Returned, and he became the most famous of his people. That very day he was made chief of the clan, which went on to be called the Tuktuk tribe.

Now you can relive that fateful day. 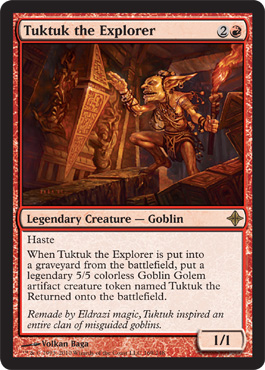 Tuktuk the Explorer is a curious little guy—an eager, three-mana 1/1 with a weighty destiny. He truly embodies his haste ability—whatever he does, he does boldly and without forethought, plunging into danger with the recklessness of a wind-up toy. As you can see, his destiny is to become transformed into that glorious goblinoid golem, Tuktuk the Returned. But you can only help him achieve that destiny by combining him with a particular kind of effect. So, to get the most out of Tuktuk, go ahead.

Combine him with death.

Tuktuk the Returned can be a three-mana 5/5, a hulk of stone that will serve as an impressive roadblock or as a threat to put quickly lethal dents into your opponent's life total. But Tuktuk the Explorer has to go on his little adventure first. And the more dangerous, the better.

The easiest thing to do is simply attack. Tuktuk, you'll find, lives a charmed life, able to sail past your opponents' defenses miraculously unkilled. Fortune favors those who turn into 5/5s when they die, as the saying goes. And when Tuktuk finally gets into a fight, he'll almost certainly lose and get on the with the business of fulfilling his stony destiny.

Or you can force the issue—and I love me an issue-forcing, especially when it results in a cheap 5/5 dream-wrecker. Build your deck around cards with demise-encouraging sacrifice abilities like Bone Splinters, Vampire Aristocrat (or a new two-mana Vampire in Rise of the Eldrazi), Skirk Prospector, or Siege-Gang Commander. Use them to off your Tuktuk on command, throwing him to an early grave for Golem-sized benefit. Or toss Tuktuk into the center of some mass removal like a Day of Judgment, a Pyroclasm, or an Earthquake, letting his Golem form rise from the ashes. If you want to build some kind of 5/5 creature token theme, you can even take advantage of Tuktuk's premature passing by carving another notch in your Quest for the Gravelord. Or you can get a double dose of counters for your Quest for the Goblin Lord (since both forms of Tuktuk are Goblins entering the battlefield). 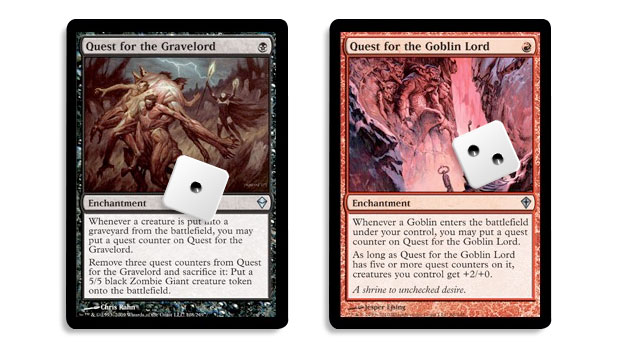 Despite his brash hastiness, Tuktuk actually makes a fine blocker. Your opponent will not want to blunder into combat with that destiny-brimming 1/1 untapped on your side. This might even ward off the most recently risen of threats—if a rampaging Eldrazi should come at you, annihilator ability a-blazin', and you are forced to choose something to sacrifice—Tuktuk the Explorer will be your hapless man. Or use Tuktuk as a delaying tactic, letting him hold the fort while you build up mana for Eldrazi of your own. For more Eldrazi-themed adventures, try the upkeep cost of an Eldrazi Monument—in lovely, story-consistent fashion, Tuktuk can be reborn by the dread power of an Eldrazi artifact.

But wouldn't I also be remiss if I didn't suggest... the middle ability of my last preview card? Sarkhan summons dragons aplenty, and dragons love eating goblins, I hear. 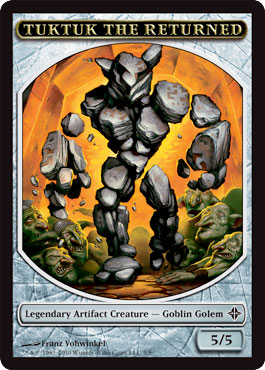 The leader of the Tuktuk tribe aside, the Eldrazi are making a massive impact on the landscape of Zendikar. It's not just that their all-devouring personages are leaving a swath of dusty wasteland behind them. There's also some weird goings-on vis-à-vis the hedrons. The dead stone has risen along with the Eldrazi, activating and forming bizarre floating superstructures in the air. Some hedrons have transformed, bristling with strange new angles and shapes, thrumming with unknown new functions. 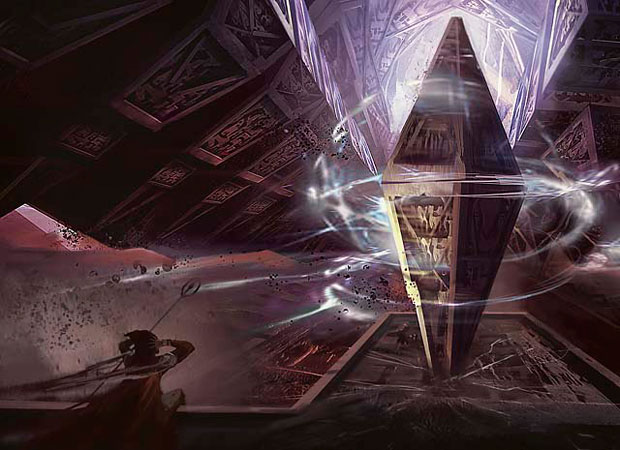 The best way to see that is to check out any Rise of the Eldrazi basic land. The art of the four Rise Islands, for example, forms a panorama that shows the mysterious structures the hedrons have formed.

What this means for the plane is not known. Have the events at the Eye of Ugin caused the planar prison to fail entirely? The Eldrazi are free to roam Zendikar—can they actually leave to devour other worlds as well? Unclear at this time. But perhaps you'd like to read the story of exactly what happens during Zendikar's most desperate days?

Zendikar: In the Teeth of Akoum Hits Shelves!

The release date for the Zendikar block novel, Zendikar: In the Teeth of Akoum by author Robert Wintermute, is April 6—a date many of you know as yesterday! By that I mean the book is procurable right now. Grab a copy and read a tale of Sorin Markov and Nissa Revane, of imprisonment and oppression, and of the monstrous Eldrazi titans and the fate of Zendikar. 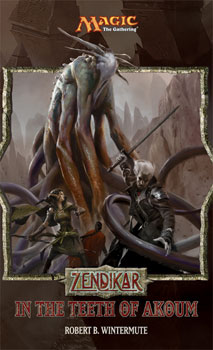 Lurking in the space between the æther and the physical planes, there is a great evil waiting to emerge ....

Zendikar is a land of danger and adventure, a world of deadly risks and priceless rewards. It is also a prison to one of the most deadly threats the Multiverse has ever known: the dreaded Eldrazi.

Nissa Revane, a planeswalker and proud elf warrior, is witness to what they can do when she stumbles into a vanguard wave of the monstrous brood. What she doesn't know is that the brood are but pale reflection of the titans that are still imprisoned.

But the ancient vampire planeswalker Sorin Markov knows all too well the power of the ancient Eldrazi titans. He was among the original jailers of the ancient scourge and he has returned to Zendikar to make sure they do not escape.

Both have their own ideas about what is to be done, but neither knows what's in store as they set out across the land in search of the source of the Eldrazi uprising.

Author Bio: Robert Wintermute
Robert B. Wintermute was born and raised in the Badlands of South Dakota. A writer by decree, a philosopher by design, and an engineer by decision, Wintermute has spent much of his adult life contemplating Bentham's Panopticon as a model for modern society. Early investigations into orgone energy have given Wintermute a peculiar insight into the nature of mana. Experience raising a son and daughter with his wife in Madison, Wisconsin has given him a peculiar glimpse into the nature of being. Zendikar: In the Teeth of Akoum is his first novel.

See you next week—the final week of previews before the Rise of the Eldrazi Prerelease!—when I'll be talking about the angels of Zendikar.