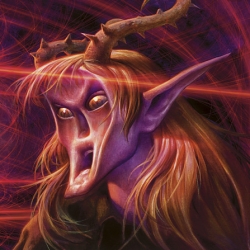 planeswalker's face is one of his or her most cherished possessions.

It's the preferred location for one's eyeballs, for example, among several other useful sensory organs. It houses the mouth, without which certain oaths against one's enemies may not be intoned. Where would the planeswalker be without the face?

Trouble is, so many magical spells and effects are designed to do ill to that precious face. Burn spells, discard effects, and Vengeful Archons, oh my! Milling effects, edicts, Act of Treason! Alluring Sirens and Gideon Juras! Anathemancers and Blightnings! Bojuka Bogs, Searing Blazes, and Ob Nixilis, the Fallen activations! Fateseals from Jace, the Mind Sculptors and pings of Chandra Nalaars! Naya Charms, Tar Fiends, and the spell-pillaging of Wrexial, the Risen Deep!

All designed to compromise facial integrity—to mar your perfect face. What's a planeswalker to do? Fashionable mask-wear? Omnipresent tower shield? Entourage of cosmetic reconstruction surgeons? Practiced agoraphobia? All impractical! You can rock the mask, though, if it's fashionable enough.

It's the targeting that's the problem. It's the fact that your opponents get to target that magely mug of yours that allows such harm to come to it. Leyline of Sanctity stops the targeting and stops the face breakage. All for the low, low price of free—as long as you draw your Leyline in your opening seven.

You may have noticed that Noel previewed another Leyline last week. As he suspected (and as I suspected you suspected), there is a cycle of leylines in Magic 2011, all with the "If this is in your opening hand, you may begin the game with it on the battlefield" ability, just like the first set back in Guildpact. The black one of the Magic 2011 cycle is a reprint from Guildpact—Leyline of the Void, the leyline which saw the most tournament play from that original group, and which may make an impact again. The rest, like Leyline of Sanctity, are new.

Leyline of Sanctity, though, is the only one that prevents face breakage.

Spark Without a Fire

Note that planeswalkers of all sorts can appreciate a Leyline of Sanctity. It's not just you, the planeswalker with the library; it also safeguards the Garruk Wildspeakers and the Jace Belerens and the Ajani Vengeants of the world from certain types of loyalty loss. If you can't be targeted by a Lavalanche or a Lightning Bolt, then the damage from such fire and lightning can't be assigned to your recently-summoned Sorin Markov. Your face is the actual target of the burn spell, so Leyline stops that from happening (to both of you). Guard your own face, and you generously guard their little faces as well. (Maelstrom Pulses and other effects that target them directly still, of course, crushinate them.)

Leyline of Sanctity can also come in handy in multiplayer situations where your head has a big, red target painted over it. Ever been the Archenemy, for example? You tend to get picked on. Ditto if you're the emperor in a game of Emperor. Start the game with a firm statement to those numerous foes: "My face is not a bull's eye."

The flavor of leylines comes from a real-world term. Outside of Magic, a leyline is usually spelled as two words: "ley line" (but note the Mercadian Masques card Ley Line—interestingly also a four-mana enchantment). In the 1920s, amateur archaeologist Alfred Watkins observed that ancient monoliths and other archaeological features in the British countryside appeared to be laid out along a few straight lines. As these lines tended to cross grassy meadows, he called them ley lines; a "ley" or "lea" is a field or grassland, or a pasture used for grazing animals.

Watkins was a science-minded, rational guy, and did not regard these patterns as anything but data to be investigated (and indeed, as it turned out, there are so many ancient features in Britain that it's easy to find straight lines that connect several of them, as can be found in any sufficiently large, random arrangement of points). But others took Watkins's observation and built upon it, claiming that ley lines were streams of natural energy or that they were responsible for other mystical or psychic phenomena. 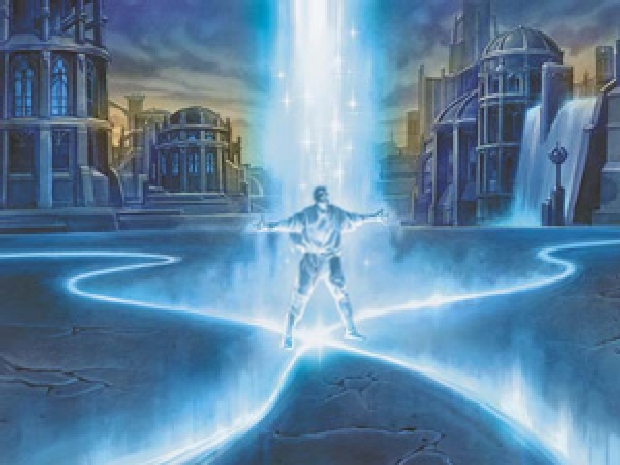 In Magic, leylines are ancient tributaries of magical energy that flow and crisscross each other across a given landscape. They're a kind of enchantment that occurs naturally in many environments, even in the urban byways of Ravnica, but only those mages who can detect them can make use of their power.

Leylines have two main practical properties as far as spellcasters are concerned:

First, like most enchantments, leylines alter the nature of the environment around them. Some strengthen living creatures; others do weird things to the dying. Mages who utilize leylines must take care that they test their effects before tampering with these primordial energies.

Second, unlike most spells, they are often found rather than cast. Leylines are deep patterns inherent in the world, and where they occur, they have been subtly altering their surroundings long before any particular mages' squabble. Correspondingly, these enchantments often begin the game already there, independent of whether the mages can even take advantage of them during the duel. Mages journey far and wide to discover these energy lines, and use them to supplement their own magics in synergistic ways.

The Ley of the Land

Leylines are enchanted patterns of the landscape; let's see if you can detect a pattern yourself. Here's the art of Leyline of Sanctity. 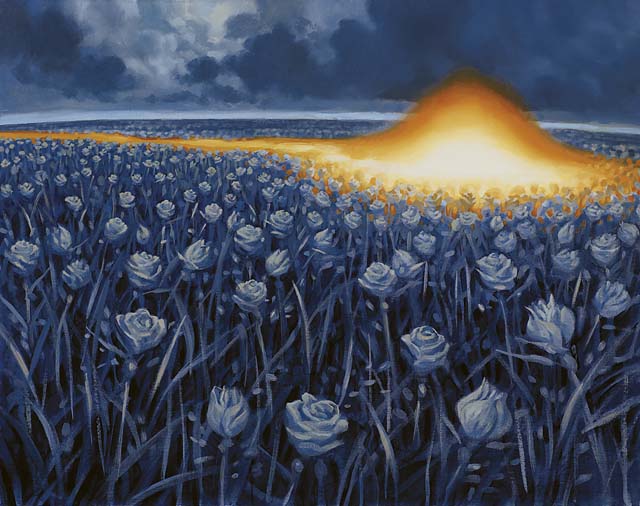 See anything interesting? Ponder it for a while. Let your mind be open to subtle patterns, just like if you were a mage trying to detect a primordial leyline.

Let's do another one. Here's the art of Leyline of Anticipation. 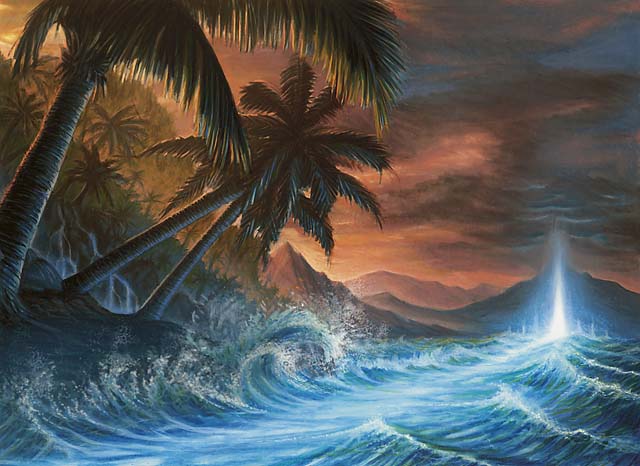 Let's do Leyline of the Void next. 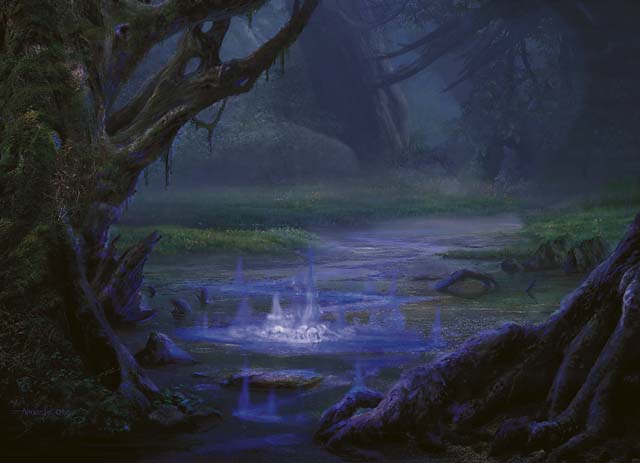 Leyline of the Void | Art by Rob Alexander

In each case, the Leyline art corresponds to the art of one of the basic lands.

Did you see it? Cool. Let's just blow them all out here:

Look around you—Magic is everywhere. May you find yourself a Leyline at the Prerelease, and may you not find yourself in Facelessville! 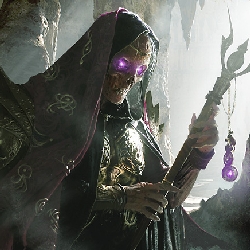 Today a letter from a concerned ... er, citizen!

Dear Doug Beyer,
Regarding your article "The Lich Get Licher":

"... unholy stigmas"
... No guarantee of acceptance"
... expulsion from, any ideological, mystical, and/or religious institutions, societies, or organizations."

At least two lines from your article detailing the legalistic prose of a lich covenant represent misinterpretations, false impressions, or downright slanderous lies characteristic of a livingist bias. This language carries the danger of setting back zombie rights for years, and perpetuating negative stereotypes of the negative-energy-aligned.

As an advocate for rights for all life-challenged Americans at home, and believer in human rights at all stages of life and after abroad, I cannot sit idle while words, indeed trends, this dangerous grow among wizardly society, threatening to spill over into society at large, which I can aver already has a negative enough disposition against my clientèle, charge and cause thank you very much.

I can count on one remaining necrotic hand the instances of positive representations, good role models, and beneficial images your society has brought forth into the public sphere. Contrast this with an unending litany of images of slavering-mouthed, mindless, depraved, brain-eating savages spewing forth from the vaults of wizard society's propaganda centers. Even the most progressive examples of zombie representations from within Wizards' walls serve to vilify life-challenged citizens, and I shall oppose every one.

Should a zombie pay for the crimes that ended his life in the first place? Should the protections under the law cease with the drawing of your breath? Should a citizen give up all he is just because he is life-challenged?

I have every faith that mankind will come to accept their zombie siblings in time. You cannot stop the movement of those who refuse to stop moving. Deceased Americans have been elected to Senate office, collected federal salaries, published popular music tracks, and served as spiritual guide to the living. Suffrage is due these long-suffering (in some cases very long-suffering) people.

I implore you to apologize publicly for your scathing words, and issue a statement that makes your positive stance on life-challenged citizens clear.

And if you do join the deceased, look me up, for I shall represent you.
--Kaz

Thank you, Kaz, for your stirring words on behalf of those who cannot muster breath for themselves! Such deathless prose! Such ... restlessly shuffling language! Although the terms of the contract in my last article may offend some, it should be known that it was legal boilerplate, nothing more—in fact I think it was literally copied from a plate bolted to a boiler, in which the souls of the damned boil for eternity. I personally would never make light of our dark undead brethren, nor ever discredit their place in a wholesome, unlife-aware society. Legal contracts of this nature must of course guard against all forms of indemnification of those shadowy hell-beings who grant lichdom, as their powers of jurisprudence are formidable—so the language may, in places, tread on culturally sensitive areas.

Thank you for the opportunity to discuss this delicate issue further, while my jaw is still attached to my skull and while my vocal cords retain their fleshy animation. 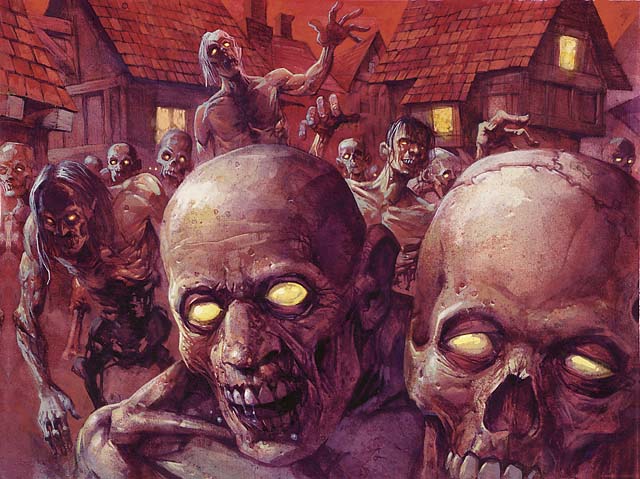 Time for our assignments. My assignment, for next Wednesday: The story behind Magic 2011's planeswalker "signature spells." You, this weekend? Prerelease.