got this email from reader Josie that really got my gears turning. Those gears that began turning happened to be attached to huge, heavy floodgates I generally use to keep myself from blabbing forever about worldbuilding and everything we do to create settings for Magic. So if today's article contains too much hyperspecific sausage-factory detail for you, blame Josie and her gear-turning letter!

I asked my husband the other day, if you could create a plane for the next Magic set, what would it be like? How do you folks at Wizards determine what worlds to create? How do you all decide between the ideas? What do you think is the most critical aspect or detail of creating a plane, and how far in the future do you develop the ideas?

Josie has opened the floodgates, so it's time for the flood. I'm going to answer all of Josie's questions, but I'm mixing up the order so as to answer them in the best way I can. I'm going to start with the last one. Are you ready?

How far in the future do you develop Magic worlds? 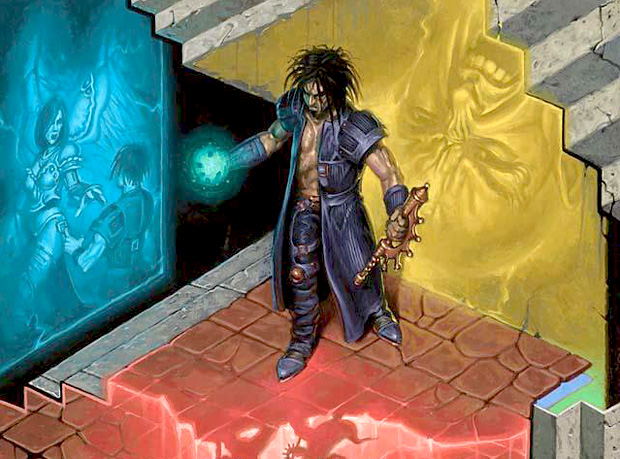 Meanwhile, during that same time frame, we've also already begun making preparations and early explorations for the next setting after that. Straddling settings like this can be a challenge; it is an exercise in permanent secrecy and routine mental compartmentalization. While R&D members are discussing Innistrad and Dark Ascension on this website, our brains are already plump with information about the freaking cool settings for the next couple of years. It's a Twilight-Zone-worthy scenario: we have all the advantages of time travelers from the future, except that we can't actually discuss anything we know—which is basically all of the advantages of being time travelers from the future—and everything we can talk about publicly, the cards and worlds that are out now, is all work that occurred two years in our past. Suffice it to say: Cool stuff! Is coming! And we'll talk about it later!

Beyond the two next settings that are constantly under way, we usually have a few fragile inklings about what might be coming along even further out than that, based on what flavor or mechanical themes are in plan for the future. Beyond a couple of years out, though, things are very tentative and are subject to change. We know those far-future plans could be radically altered or completely scrapped at any time, but it's still useful to let those ideas percolate for when the time comes. Having an idea of what might be coming down the road later can help you make aesthetic decisions about what you're working on presently, to help make sure that settings feel sufficiently different from each other. For example, we gave vampires on Mirrodin a very particular visual shtick (syringe fingers) because we knew we would want to distinguish them from, more importantly, the look of vampires of Innistrad (Sorin-inspired dark scleras).

But that only tells us the timing and scheduling stuff, the when of building the world. Now we turn to the hows and the whys.

How do you folks determine what worlds to create?

This is the meat of Josie's letter. What makes us come up with a particular setting and not another one? The answer is that we're guided by the theme of the block.

The engine that leads to a block of Magic sets is neither pure flavor nor pure mechanics, but something that comes before and gives rise to both: a theme. By "theme" I mean whatever subject matter the block is going to emphasize for the year. A theme can be mostly mechanical (for example, "this year we're going to blow out tribal mechanics") or heavily flavorful ("we're doing cards inspired by tales of Gothic horror"), or something in between ("Phyrexia is going to wage war on a world full of artifacts"). There are a lot of different kind of imaginative seeds that can blossom into a Magic block—the point is that the theme is some big idea that guides the creation of the block. 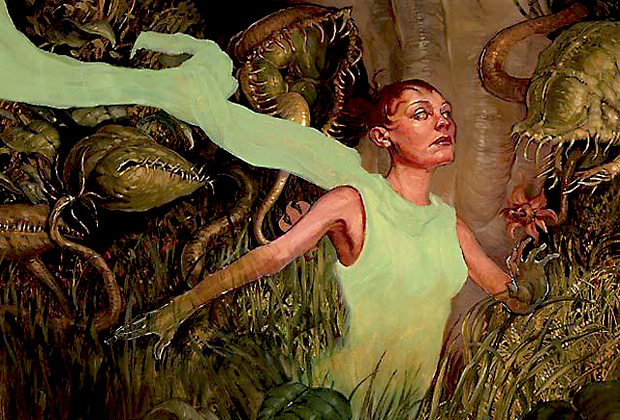 After the theme is determined and agreed upon (with input from wise representatives from design, development, creative, and brand), designers can begin making cards that correspond to that theme, and we in creative can begin spinning ideas for a world that can bring that theme to life. Design and creative work roughly concurrently for a given block, each team keeping their eyes on what the other is working on, so they can stay in synch with each other and get inspired by each other's ideas.

How do we turn a theme into a world? The path can be rocky and full of switchbacks or it can be relatively straightforward—but either way, it involves a lot of work. Innistrad's theme, for example, implied a particular world from the get-go—we knew we wanted a block based around Gothic horror stories, so the main idea was already in place. But there was still work to be done to populate that world, create the look of the werewolves and geists and vampires and the various flavors of zombies, design the architecture and weaponry and equipment of the local populace, fill the world guide with concept illustrations to serve as reference for card artists, devise hundreds of proper names for provinces and villages and castles and vampire families and whatnot, and round it all out with pages and pages of text describing everything we could think of that might come up in creating the block's cards. Almost everything comes back to that theme.

Deriving the world from the theme is not usually as straightforward as Innistrad, however. Zendikar's initial theme was "land matters"—a set based around mechanics involving lands. That didn't immediately suggest a setting, but after mulling it over and discussing it over quite a few creative team meetings, we began to think of Zendikar as a high-adventure world of daring explorers and exotic locales. That adventure-world flavor then fed back into the mechanical design of the cards, leading to card designs that evoke traps and quests and exploring gear, on top of the land-matters mechanics that had already spawned from the "land matters" theme. 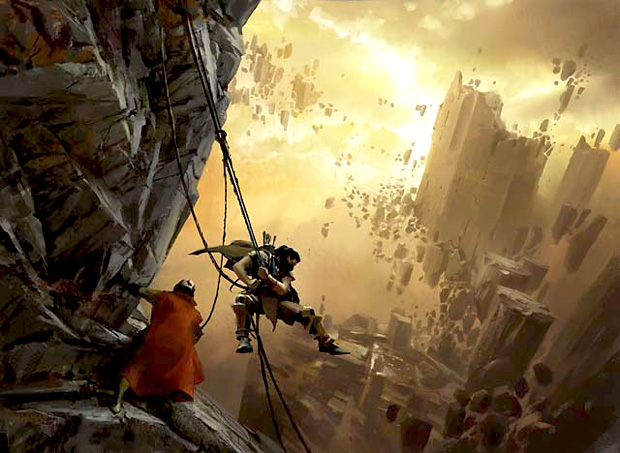 The theme is the driving force that defines the scope and overall character of the setting. But when it comes down to individual details, we rely on something else.

How do you all decide between the ideas?

As I've mentioned, for high-level decisions about building a plane, we rely on the theme of the block. We decided Innistrad should seem ambiguously European, for example, with elements of Jack the Ripper's cobblestone London, archetypical Transylvanian manor houses and gravestone-dotted moors, word constructions that sounded vaguely Germanic and vaguely Slavic and maybe a touch Scandinavian, and human peasant dress that looked appropriate for a chilly autumn in 1790. All of this came to be because of the guiding star of the Gothic horror theme. Innistrad materialized that way, with the broad strokes guided by that consistent set of source material of Gothic horror tales. 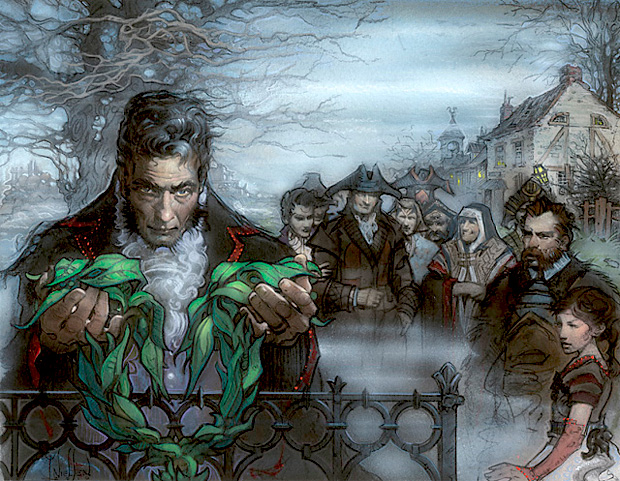 But what about lower-level decisions? What happens when you get past the broad strokes, some vampires here and some creepy castles there? For decisions that get too specific for the theme, the answer is that we decide by our own sense of excitement. We play around with the phonetic properties of the name of a particular Kessig village, or with the design of the symbol of Avacyn, and we go with our own sense of what feels cool. The high-level theme of the block isn't specific enough to adjudicate what the anatomy of a werewolf's thumb, or whatever, should be—we just have to do a bunch of concept sketches of them and look at them. There's no math problem you can crunch to determine the path there, and the general block theme will be satisfied whether werewolves have humanlike palm-mounted thumbs or long, wolflike, wrist-mounted digits; all the Gothic horror theme cares about is that there are werewolves at all. Those day-to-day judgment calls come down to plain old aesthetic sense.

We make these detail-level decisions the same way you undertake any creative endeavor: 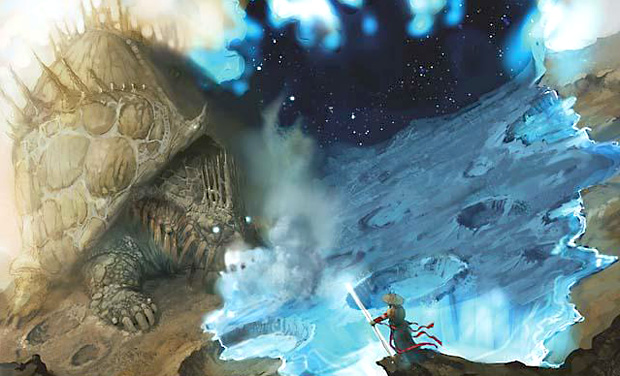 The creative team comes from a variety of backgrounds in art, writing, journalism, philosophy, theatre, history, science, and even management. We throw everything we've got at the plane, every stray scrap of education or experience or inspiration we can muster, and let details accumulate. We slather on piles of crazy particulars, then give it all a shake to let the loose bits fall off. Once we overbuild with all the ideas we can think of, we then attack it and attack it and attack it until what's left feels rich and alive and odd, like a world. When it comes down to those case-by-case micro-assessments, your own thirst for detail and hunger for beauty kicks in, and you become your own guiding star.

What is the most critical aspect or detail of creating a plane?

Know your purpose. The theme-first process might sound different than you expected, Josie; I know I've talked to some Magic players who have assumed the creative team spends its time generating planes speculatively, so card designers can come along later and design card sets around them. We do play with far-out ideas, but the fact is, most of Magic's worldbuilding is done with a specific purpose in mind. The setting is not just there for kicks. It has a job to do. It has a goal it is trying to satisfy.

The Multiverse is infinite and fueled by the uncountable possibilities of magic-wielding planeswalkers. There are so many possibilities that you have to name a target to help aim your creative cannons. So start with an off-the-wall premise, a "what if" that can narrow down the possibilities and guide your decisions. Start with a map, if you like, with cool geography that underlies the guiding principle of your world. Negate one of the normal foundational assumptions of Magic planes, maybe, or crank some background element up by a factor of a thousand. Take a favorite fiction genre or some oddball element of an Earth culture, grab it firmly, give it a hard 180-degree twist, and use that as a starting point for the plane. Or dream up a mechanical motif you'd like to explore, a new aspect of the rules to highlight or a new twist on earlier Magic mechanics, and investigate the implications of that theme as they play themselves out in a setting. The crucial thing is: have a guidepost out there, a sturdy tower or pole star that can help keep you on track as you do your wandering.

That purpose does two good things for you. One, it gives you a theme you can use as a yardstick, a way to measure whether you're succeeding or failing at the task. Two, it lets you pick a new destination next time, so you can do it again and again and it always feel as exciting as the first time.

Thanks so much for your questions, Josie! See you guys next week.