hat's the opposite of a theme? Explosives, maybe. Instead of a unifying element to draw all the parts of a column together, today I set a bunch of trinitrotoluene in the middle of Savor the Flavor and elbow the plunger. Put on your safety goggles and step behind the explosion-proof screen, friends, because here come a bunch of random flavor-related stories from Shards of Alara and beyond.

Ranger of Eos, the Invitational card designed by Antoine Ruel, has been given the nickname "Bantoine Ruel" by players. The Ranger is indeed a Bant creature, a principled beastmaster in majestic full plate armor. But for a short time during development, the card had another nickname. As the Shards of Alara development team tweaked Ranger of Eos's cost and stats to try to get it just right, it was a little more expensive than its current 3W, but a little bigger at 3/3. But we in the creative team consider 3/3 to be too big for a single human being. Even many mounted knights in Magic are only 2/2, and the art had already been commissioned as the way you see it now. The creative team spoke up, and the card was reduced to its current stats of 3/2—still a powerful hulk of a man, but at least smaller than the hefty frames of a Hill Giant or Trained Armodon. Referencing his temporary 3/3 status, Brady Dommermuth dubbed him "Antoine Ruelephant."

I often get asked why a card got the flavor it got, in particular the art or the card's name. Why do we sometimes do odd card concepts or convoluted card names? Why do we end up with strange pieces of art like Dream Fracture or obscure, setting-invoking name references like Hisoka's Defiance? Here's why:

That's a list of just about all the cards that, in some way, counter a spell. (I didn't click through all of them—I may have gotten some false positives here—but you get the idea.) There are a lot of Magic cards. Sometimes it's fine to go for the one-word transitive verb counterspell name—stuff like Disrupt, Hinder, and the nice newcomer Negate—but those one-worders are a precious resource. There are still some good ones left, believe me. But I don't throw them around, and I wouldn't mind getting some of those on that list back in my hip pocket, to tell you the truth. I love me some good transitive verbs, and if you ask me, some of them were—yeah, I'll say it—squandered.

I think about these things late at night as ferries drift by on the black mirror of Puget Sound. Their mournful foghorns sound like counterspell names to me. "Thwarrrrrrt," they say. "Daaaaaze." "Laquatus's Disdaaaaaain." Wait, what?

When the 2/2 flyer known as Welkin Guide entered Shards of Alara during design, it had the same mechanic you see on it today in booster packs. To give white a harder-hitting flier for Limited, however, it changed—it became a slightly simpler 3/3 flyer, full stop. But the art was pretty closely tied to the "give a creature a boost" mechanic. The whole piece was concepted (forgive me for using "concept" as a verb—I know that grates on some people's grammar lobes—it's just how we talk around here) around the idea that the aven (bird-folk) was helping out the human soldier, giving him a temporary aerial advantage over the battlefield.

If it had stayed a 3/3 flyer without a comes-into-play ability, the art would have represented a somewhat inexplicable aven-plus-soldier combo. "Why," we thought to ourselves, "would this 3/3 aven be carrying around this gentleman? Does the combination of their fighting prowess represent their 3/3ness? Is the aven a human collector of sorts? Or is this the Bant equivalent of a paratrooper, a soldier with a bird-person strapped to his back?" I couldn't get over the fact that this art made no sense without the aerial-accompaniment mechanic.

A few people mentioned how much they liked the previous ability, and we in the creative team beseeched the developers to consider the mechanical implications of the art. And happily, the card was restored. To this day I'm glad of it, using the nice Bant aven to lift up my mean Naya behemoths. Fly over and bash you for 7?

The Great Swappage of Alara

Sometimes development teams make changes that can't be helped, even after all the art for the set has been commissioned. We do our best in the creative team to make sure that the cards' flavor still makes sense despite the card changes. Sometimes that means art swaps: changing what art goes on what card.

Sometimes it comes down to a simple one-for-one swap. For example, did you know that the art of Sighted-Caste Sorcerer was commissioned for the card that would become Outrider of Jhess, and vice versa? Of course you didn't! But the wheels are turning now, aren't they? You're curious about the more involved series of swaps that this section of the article is probably about, aren't you? Of course you are! And how bad could that be? I heard a saying about curiosity once—something about a cat that I can't remember—but I'm sure it's safe.

The most dramatic art swap in Shards of Alara started with a card whose playtest name was Armageddon Man. You now know this land-swallowing behemoth as Realm Razer. Originally, that card had this art: 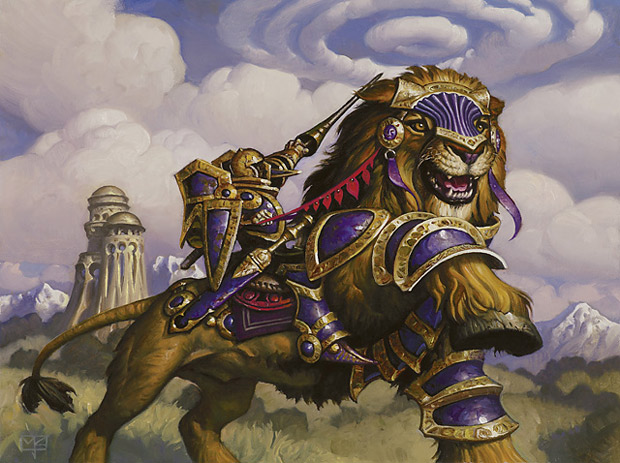 That's because it was originally a 2/2 that cost 4WW, and its art description was for a Bant knight. See how it's pointing up into the clouds, causing a rumbling storm that would eventually wipe out all the lands? That's what we thought at the time, anyway.

All those Banty plans changed when the card's cost became 3RGW. See, those are Naya colors, which meant the Bant knight-on-leotau was right out. This wasn't a simple matter of changing into some other Bant art. This was a shard-changer. Hoo boy.

To start the chain of art dependencies, we gave the newly Naya-fied critter this art. 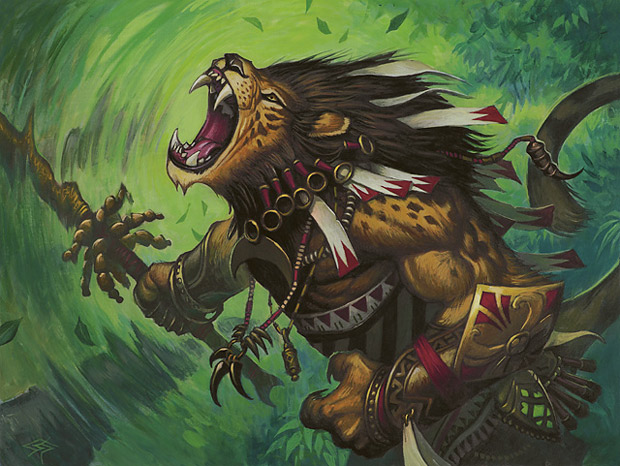 This Nacatl warrior art had been hanging out on a fierce 3-color vanilla critter. The Nacatl warrior that had this art, meanwhile, had been getting larger and larger, and eventually became so large it needed other, more beastly art. To remedy this, it got this piece swapped onto it: 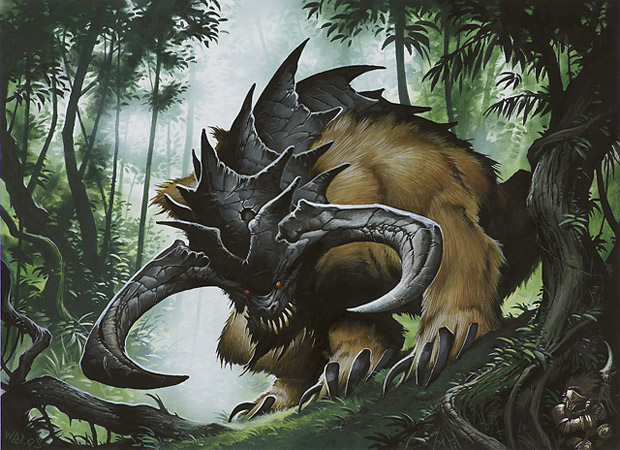 That piece came from a mono-green monster that was actually getting smaller and smaller. It was now a 2/2 vanilla, a Grizzly Bear, a simple card which was a big help with mana curves and mana bases in complex Shards of Alara Limited play.

But now we had a problem. The "Grizzly Bear" creature that once had the Thoctar art now lacked art, and we had an extra Bant piece, the mounted knight with the lance shown above. There was no way that that knight was a 2/2 monogreen creature. So the swap continued. 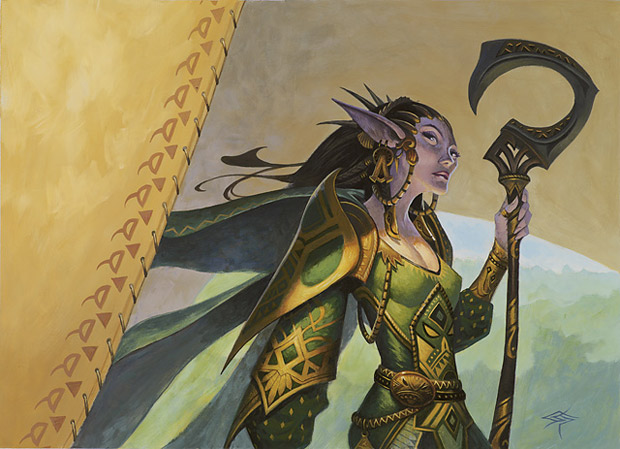 She was originally concepted for the card that is now Steward of Valeron. She looks like a vigilant mana-creator, doesn't she? She's up there in her sunsail tents in Naya's canopy, watching over the valley of Progenitus, making mana and not tapping to attack. That swap is perhaps the saddest part of this huge swapportunity, I think, since she really fits that mechanic. But since the 4WW Armageddon-critter changed from Bant to Naya, we needed some card to go back the other way, from Naya to Bant.

The elf in the sunsail tents moved into the 2/2 Grizzly Bear slot. But now we had a 2/2 vigilance mana-maker for GW. We filled that slot with this art: 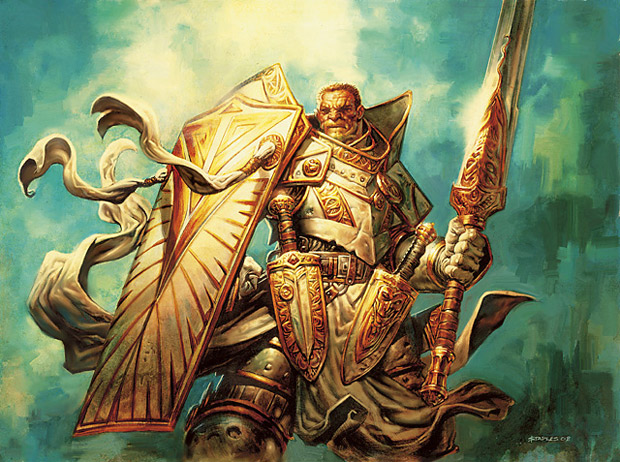 That was the art that was originally on the 2/2 knight that fetched a plains, the card now known as Knight of the White Orchid! The knight on leotau-back, with his lance pointed up into the air, became the plains-fetcher (I actually like him better there) and this mighty knight on the greenish background became our vigilant mana-maker. "Human Druid Knight" is a little forced, I admit. But Valeron is home to the famous Sun-Dappled Court, a grove of twelve time-honored trees, which definitely has a green mana connection. With much soul-searching, I decided it was best that this 2/2 for GW be the fellow who "crossed shards" from Naya into Bant, and put the staunch, green-hued knight art above onto him, dubbing him Steward of Valeron.

This huge art-swap tale was nearing its end. The only detail was that Armageddon Man, who was now a Cat Shaman, had become 4/3 or thereabouts, which was a little bit too large for your average leonin shaman. Meanwhile, the art of the cycling Giant Growth spell, now known as Resounding Roar, had come back looking more like a critter and less like a spell. It looked thusly: 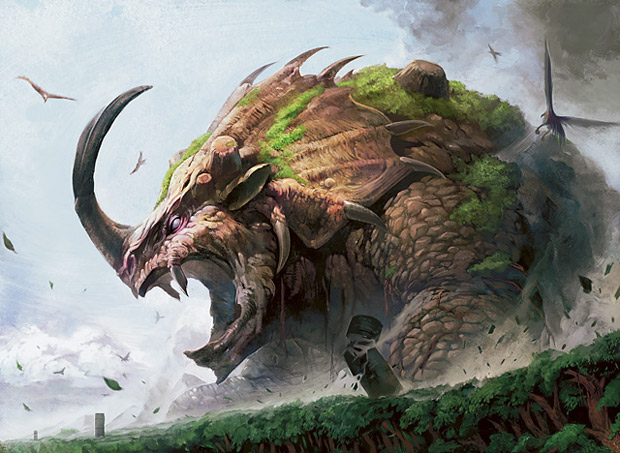 So we made that final swap. We took the Nacatl warrior art and put it on Resounding Roar (which totally fits in my opinion—of course, the name helped) and put this enormous horned beastie onto Armageddon Man. Development wanted to make Armageddon Man smaller again (since it's important to be able to easily kill a critter that eats everybody's lands—and indeed, I don't know how many times I've floated mana to Magma Spray that thing) but I pleaded for it to stay bigger than the 2/2 humanoid range. Ultimately it stayed at 4/2 to justify remaining a land-stomping Beast, and the swap was finally complete.

Subject: Who are you?
Dear Doug Beyer,

Ok, I didn't literally mean who are you. But what I wanted to know is...
1) What is your fave type of mana?
2) What is your fave card of all time?
3) What current deck are you using?
4) Can you give us a deck list of the names?
5) Do you have a myspace? facebook, youtube, etc...?
6) Do you do the column for a living?
7) If not, what do you do right now? And what did you want you want to do? And did you go to college? What were you trying to major in?

Thanks for the time reading this!

It feels unnervingly vain for me to answer these questions, but hey, Troy's curious. So what am I supposed to do? Feign modesty while talking about myself? Sold! (If you aren't Troy and you don't give a rat's whisker about my answers to these questions, then I don't blame you for clicking away at this point.)

Thanks for letting me blab about myself, Troy!

See you next week, when we talk etherium.