Unsung Heroes of the Core Set

ver since two Junes ago, when Magic 2010 parachuted into the center of our Gaming Reality, flavor has been reigning master of the Core Set. As you're a person who has been known to enjoy la saveur from time to time, this may please you. You appreciate the evocative aroma of a freshly baked Phylactery Lich. You dip your biscotti into a hot cup of Ancient Hellkite. You nod, eyes closed, at the melty mouth-feel of an exquisitely prepared Mitotic Slime. Fabulous. 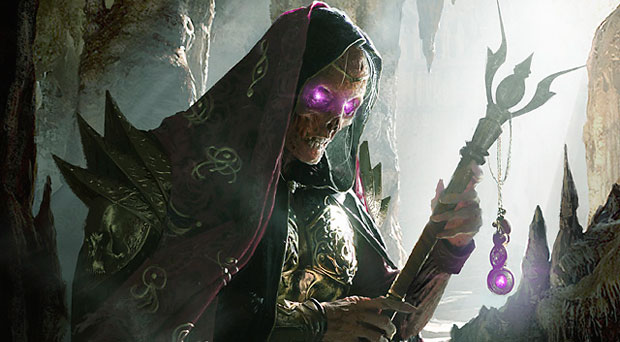 These are the big flavor hits, sure—the crowd-pleasing top-down designs that get advertised on the blackboard outside the boutique café, to pull people in off the street and get them to check out the menu. But there's another level of flavor in the Core Set—one I get extremely excited about. They're the unassuming little nuggets of flavor that don't hog the spotlight, but just quietly round out the set with flavorful designs. These are cards that are in the set not because they are flashy, high-profile tropes of fantasy, but because they deliver flavor. They build a bridge between the fantastic worlds of the Multiverse and the mechanics of the game. They throw our expectations into a cauldron—along with the fun of a new game piece, and the surprise of an unseen twist—and brew up something delicious. Those are my favorite kinds of cards. The Ice Cage that you can chip your way out of, or the Sacred Wolf that you're not allowed to cast spells upon. The Necrotic Plague that gets spread from creature to creature, or the Manic Vandal who breaks stuff.

This type of top-down card deserves more love than it gets. These unassuming little flavor victories are the unsung heroes of the Core Set and of Magic in general. They provide the welcome mat that draws your mind into the rules of the game. They use the scaffolding of your preexisting mental structures to help erect a solid understanding of Magic. Plus they're just pleasant. So today, I want to sing the unsung.

Magic 2012 releases this weekend, and it is bursting at the seams with flavorful cards like this—tiny triumphs over the mind-reeling complexity that clouds the mind of the new player. My preview card is one of these. It's not the flashiest—but if you're like me, it will bring a smile when you read it. It is not the most jaw-dropping—although if you get hit by it, you will feel it. I am happy it's part of Magic 2012, because it helps me shine a light on it and its brethren, the hidden flavor gems of the set.

To introduce the card, I'd like to share its art description with you first (which is the text we send to the card's illustrator to tell them what to illustrate). Here's what we asked for from artist Michael C. Hayes. As you read, try to picture it in your head:

Color: None (artifact creature)
Location: Up to you; perhaps a high-ceilinged dungeon chamber
Action: This is a tall (about 15 feet / 5m tall) golem/statue made of dry, cracked stone. It's incredibly top-heavy, with a huge chest and arms, and it looks like it's beginning to crack near its midsection and tip forward (toward the viewer).
Focus: The teetering, crumbling colossus
Mood: In about one second, we're going to be smashed under a building's worth of stone.

Got the image in your mind? Did that image look something like ?

It's off to a blazing start—now it's time to wrap this guy in some rules text. I could imagine a range of ways to design this card. But I should mention that this card is an uncommon, and that that means it should have a certain level of simplicity. There are some kooky lines of text that we would only try on a rare or mythic rare that we would hesitate to put on an uncommon. For example, I could envision lines of text like: "It becomes a Golem artifact creature, and its power becomes equal to the number of stone counters on it," or "And then after it falls on your opponent, this creature turns into a Pile-of-Rubble token creature. Uh, somehow." (My templating skills rule.) But if we can get across the essence of this Crumbling Colossus with just a few clever lines of text, that'd be simpler to understand and a better Core Set uncommon for everybody.

Plus it would become exactly the kind of card that could live in that cozy little café in my Vorthosian heart.

So what if it were something more :

There you have it—a big stone statue that crumbles and falls over on your opponent. It's top-heavy and its legs barely support its weight, so it can't walk around and come beat you up. But if you come fight it in range of its arms (i.e., you attack into it), you're getting a beating. Finally, its ace in the hole is that, if push must needs come to shove, it can execute one overwhelming, self-destructive attack—and when it does, it hits like a buildingful of tramply bricks.

That's the kind of unsung hero I mean. They're flavorful, fun little cards that, if we're doing our jobs right, make up most of the rank and file of the Core Set. Their abilities are not just jumbles of technically mechanically legal rules text, and their names are not Graxiplon-like shrugs of resignation. All the elements of the card—the name, the rules text, the art, and the flavor text (if there's room after the trample reminder text)—cohere into a single idea. Even if the result is not a splashy Constructed angel or a Multiverse-traipsing Planeswalker or a fire-breathing dragon with proven appeal, it's a card that delivers on its flavor—and it deserves some love.

So welcome to Magic 2012, well designed and flavorful artifact creature. And welcome to the affection-chamber in my chest, Crumbling Colossus.

There's room in my heart for more than this gravid Golem. I was on the design team for Mark Globus's M12 design team just as I was for Aaron Forsythe's M11 team, and we worked hard to create a full lineup of flavorful designs. A lot of them are already among the M12 cards that you've seen so far in the Card Image Gallery on the Magic 2012 Mini-Site. There's the Illusion theme of Phantasmal Bear and friends in blue and the one-two punch of Griffin Rider and her various flight-enabling mounts. There's the creature-munching Devouring Swarm and the icy (and Frost-Titan-referencing) instant Frost Breath. There's the sharp-eyed guy who mans the bipod-mounted Heavy Arbalest—Arbalest Elite. There's Dungrove Elder, the Treefolk that is so intimately, elegantly connected to the Forests around him. There's the two-for-one deal of basic fantasy gear in Greatsword and Kite Shield. 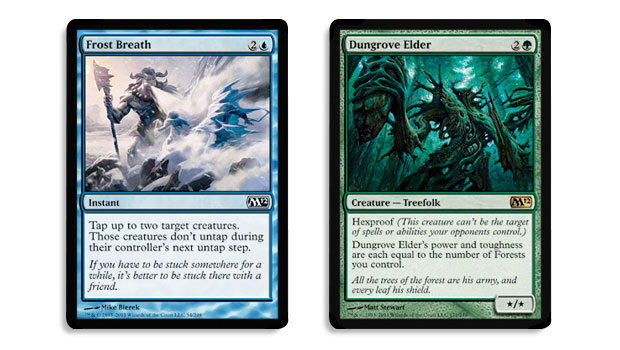 A personal project of mine was to create a cycle of five "mages" that would showcase the look and flavor of mages in Magic. Spellcasters are the heart and soul of Magic, from the lowliest one-shot task mage to the most powerful, world-spanning Planeswalker. I felt that the Core Set would be a great place to show unequivocally how dynamic and resourceful mages are in our game, and to show how the prism of the five Magic colors transforms the basic Human Wizard into a unique, color-aligned mage. I loved how the Ravnica guildmages perfectly expressed the ethos of their respective guilds, so I hoped for a similar direction for these mono-mages. Happily, M12 lead designer Mark Globus supported this project, and we worked on many designs that ultimately became the cycle of Alabaster Mage and friends (one of which has yet to be revealed). They're mages that are each able to "cast a spell"—like a basic task mage—and thanks to artist Izzy, they all look cool doing it.

Check out the cycle of Mages in the M12 Card Image Gallery.

I hope you enjoy Magic 2012 at the Prerelease. Drop a Crumbling Colossus on someone—I can personally guarantee that it's fun. (Or Act of Treason your opponent's. Oh man. Never has there been a more treasonous Act.) And look for some flavorful cards that put a little glow in your chest.

This week's letter comes from Joe.

I was wondering what you consider the flavor to be for a spell that creates a token. There is a design question as to whether a spell such as Phyrexian Rebirth should be a 6 CMC sorcery that creates a token or a 6 CMC creature with an Enters-the-Battlefield ability and Power and Toughness as X/X, but how can this be explained from a Flavor perspective?
--Joe

Interesting question, Joe. Before we get to the "movie in our heads" flavor of what's going on, let's consider the two types of card first. Let's run down the various parts of the card and see how they're affected by being one or the other. We could imagine two very simple cards, one that's a "vanilla" creature and one that's a spell that creates an effectively-the-same "vanilla" token creature. For example, these two cards from Future Sight are pretty close. Pretend Pact of the Titan was a

sorcery without all that worrisome "losing the game" business:

So what are the differences between these types of cards?

But your question is about the in-world flavor of those differences. Honestly, a TV show that showed a mage summoning a red 4/4 Giant would probably show exactly the same special effect sequence, whether it was trying to represent a sorcery card or a creature card. In the game there's an often-significant game-play difference in the feel of a token card—it seems more likely to "evaporate" when it dies or gets bounced or whatever. So although token creatures truly are creatures in the in-world sense, perhaps they have a less-stable connection to the world into which they are summoned, so they're more apt to dissolve into the æther whence they came. If the token-generating spell had any other flavor details about it that would make it different from your basic creature summons, then that could also affect the feel of the spellcasting act. I mean, a spell called Wurmcalling is more than just "I cast Craw Wurm." It's got more of a ritual sound to it, and art that shows off the relationship of summoner and summoned. Plus the buyback mechanic gives it this sense of an unending druidic chant that occasionally rips larger and larger Wurms out of the æther. It's those subtle flavor differences in those token-creating sorceries and instants that I think reflects how differently they appear in the Multiverse.