Ice Cage is, to most people, flavorful. Emrakul, the Aeons Torn oozes with flavor, too. So does the sanity-degenerating Sarkhan the Mad. So does the head-regenerating Protean Hydra. What do all these flavorful cards have in common?

Defining things is not what I am normally about. Despite the fact that I spent several long years earning a couple of philosophy degrees, or more accurately because of same, I no longer enjoy the following sort of discussion:

Doug: That new law is totally unjust.
Chatty McDefineypants: Ooh, that's interesting. What do you mean by that? What is justice?
Doug: *involuntary groan* Um, listen, I suddenly remembered that I left the iron in the... bathtub.
Chatty McDefineypants: Wait! We have to define our terms!
Doug (while speed-walking away): You define annoying.

I'm not against terms having good definitions, really. It's just that I know where those conversations go. Somebody proposes a definition, counterexamples swarm out of nowhere like ants at a picnic, and the whole thing devolves into a shouting match that convinces no one and leaves picnics in the area ruined.

I would be happy to leave that kind of thing behind me.

But I can't leave it behind—not completely. I'm fooling nobody with my appliance-related excuses. Like it or not, definin' is written on my soul in permanent marker, with two underlines. So we're going to get into it today. If you're averse to the systematic formulation of abstract terms, feel free to plead some alibi and speed-walk away starting ... nnnNOW.

What we call "flavor" is constructive simulation.

Kindly remain in awe throughout your reading of this article.

Flavor is a kind of simulation. In the abstract, simulation is when something is being imitated or reenacted. It's an act of pretending, a re-creation with the goal of coming up with a likeness or model. It's the replication of a set of characteristics in some form.

Most Magic flavor simulates, broadly speaking, the fantasy genre. (All simulation is simulation of something. All the concepts behind simulation—imitation, reenactment, modeling—imply a referent, the thing being simulated. For example, meteorological models simulate the weather.) Fantasy is heroic, magic-suffused storytelling, inherited most prominently from Tolkien, but built on a foundation of myths and adventures that date to the earliest scraps of human written history. The big, obvious themes of fantasy are adventuring heroes, magic, exotic lands, and wondrous creatures. Magic flavor recreates these aspects in its art, creative text, rules, and card design. 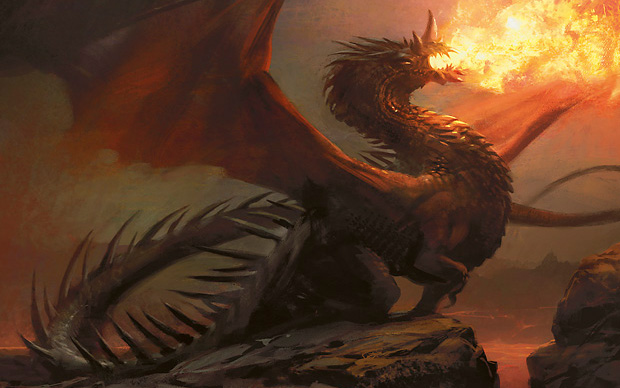 When it comes to games, there's pleasure inherent in simulation, because simulation meets expectations. It takes what already seized our imaginations, what was already built into our intuitions about a genre, and throws more of it at us. You expect a dragon to be huge and fierce, to fly, and to breathe fire, and voila—there's Flameblast Dragon simulating all those aspects of your idea of dragonhood. You expect a White Knight to wield a lance, ride a valiant steed, and abide by a code of honor. You expect a Crypt of Agadeem to be a creepy place that houses the dead. You have expectations about goblins and mana and pegasus and enchantments and liches and the way a Fireball works, and Magic simulates all of those things. It's fun to have those expectations satisfied. It's fun to anticipate finding something and then find it, so we simulate aspects of fantasy that people expect.

Of course, since expectations vary, what counts as good simulation can vary from person to person. Some question the details of Ice Cage. Others wonder about whether Form of the Dragon really captures the transformation into dragonhood. That's okay. We have an unlimited number of cards in which to try to nail that simulation of the perfect fantasy basilisk or unicorn or ouphe.

But simulation, I contend, is only part of what flavor does. If we were just simulating what had gone before in fantasy, only rehashing the (surprisingly limited number of) classic fantasy tropes, we wouldn't be Magic. We might be Pretty Good Fantasy Card Game, but not Magic. The other part of flavor is construction.

We don't only crave the familiar—we also crave the original. I call flavor constructive simulation because a necessary component is not only to recreate the old, but to invent the new. Flavor is creative, in the sense that means "productive" or "additive." It tweaks and twists and reforms the expected.

The constructive aspect of flavor mixes the pleasure of surprise and novelty into the pleasure of satisfied expectation. Its job is to expand the boundaries of the inherited traditions of fantasy, giving the same feeling of adventure and wonder we enjoy from fantasy while taking the mind somewhere entirely new.

Some construction is minor, like a tweak to a well-known race; some is major, like an entirely new world founded on wild assumptions. The faeries of Lorwyn have insect-like wings and legs—that's a new angle, but a minor one in the grand scheme of things. Mirrodin is a plane made of metal, suffused with artifacts, born from a golem creator and orbited by a handful of mana suns—a much more challenging departure from fantasy, but still grounded in fantasy roots, and wholly Magic's own.

Interestingly, flavor construction of this kind can actually generate new expectations that can be satisfied—simulated—later. The color themes from Magic's first set, for example, are still guiding card designs today; generally speaking, goblins and giants are still red and elves and basilisks are still green. Time Spiral block built on nostalgia for Magic's early flavor, revisiting sights, sounds, and mechanics of the much-explored plane of Dominaria.

So flavor is constructive simulation. It creates a fantasy facsimile to let you walk down a familiar path, but with new twists and turns to vary up the journey.

There's your definition, straight from the Sharpie on my soul. But other than "do what we've been doing," that doesn't really tell us particulars of how we should create flavor. What constitutes good constructive simulation?

It's a tricky balance, and we learn new things about it every set. If a game relies too much on simulation of the known, it's dull. If it's too wildly constructive, it's unrelatable. The mix is not easy to nail; it's a collection of rules of thumb, none of which are necessary and none of which, on their own, are sufficient. For example, we try to include Magic's iconic creatures—dragons, angels, vampires, demons, wurms, drakes, zombies, elves, goblins, sphinxes, those guys—in just about every set. That helps satisfy both angles—it allows us to present relatable fantasy concepts while showing off how wurms or goblins look new and different this year. Many blocks feature a mix of old and new planeswalker characters. Every set has some cards that are designed top-down (Pestilence Demon) and some that are bizarre new oddities that challenge the imagination and aren't intended to mimic anything in traditional fantasy (Jaddi Lifestrider). We fill a world with fantasy tropes (knights and castles, say) but give it our own twist (sigil-adorned knights of Bant who ride hooved lions). It's a balance. 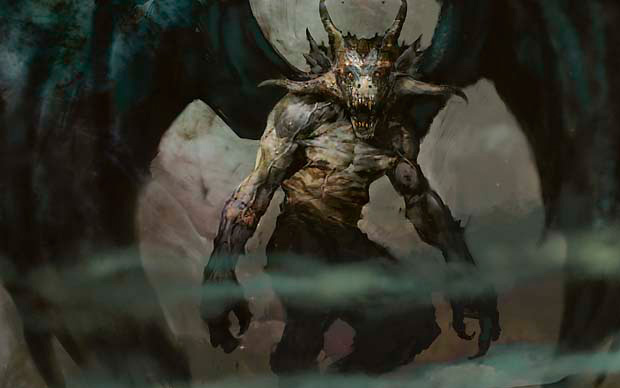 Also: pendulums. (If you're playing the magicthegathering.com drinking game, you must now drink.) Some sets and settings are built to be more resonant than others, and over time you'll see some flavor that is more additive, more inventive, and some that is more of a direct simulation.

Please note that the "more constructive" vs. "more simulation" axis is different from the "more flavorful" vs. "less flavorful" axis. Settings, cards, and mechanics can represent different points on the construction vs. simulation axis and still be perfectly flavorful, just as Ice Cage and Emrakul, the Aeons Torn are both full of flavor. To my mind, being more flavorful means more of both, and being less flavorful means less of both. 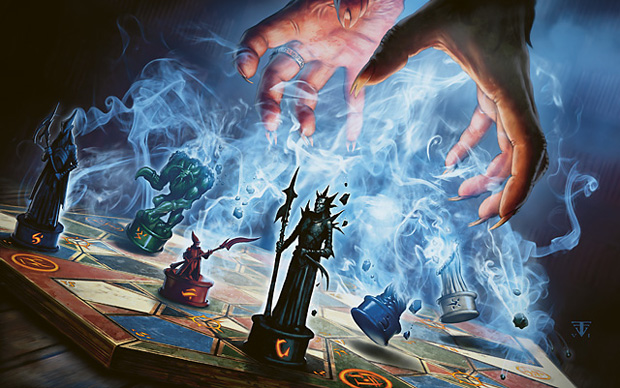 Chess, for example, is less flavorful than Magic, meaning it's a less direct simulation and it's less constructive. Chess is a more abstract game; its rules are a less direct simulation of its referent (warring armies on a battlefield) than Magic is of the fantasy genre. It also expands very little on its referent; there are no unique creatures or legendary heroes in chess. (That doesn't make it a bad game—just a less flavorful one.)

While it's crammed with flavor, Magic also has a few elements that are unflavorful, usually by being very loose simulations of the fantasy referent. Rebound, for example, is pretty mechanical (which is why Kelly freed me up from sticking to the theme this week). I enjoy taking this column to build creative elements around mechanical procedures (rebound is magic with an aftershock, like an earthquake that has a secondary temblor that mimics the initial shock), but some game mechanics are just that.

You and I, we're flavor fans—or to satisfy Chatty McDefineypants, we're fans of both construction and simulation. We work to keep Magic rich in both.

I would like to ask in response to your article about a particular Planeswalker known as Nicol Bolas. Now, as you mentioned the current Planeswalkers are all going through changes, what with Sarkhan Vol descending into madness and Jace Beleren sculpting the minds of others, but what of a key player known as Nicol Bolas. We have just found out, as of recently, he has survived his ordeal in Alara and absorbed the Maelstrom, but has he gone through a change as well? I am wondering this because as the current planeswalker exists I cannot see him getting any bigger without reaching Eldrazi status. He was already considered a god among the new planeswalkers and his ability to shatter the minds of others simply by touch alone was enough to make any mortal quake with fear; so the question is how can a God become more Godly? And if Bolas did or did not go through a transformation will he even be considered for being reprinted? It would just be a shame if Nicol Bolas came back to the game for one romp and rotated out along with other planeswalkers when "Lights" comes out. In any case thank you in advance for any and all information on the matter and do take care.
Sincerely,
Wil 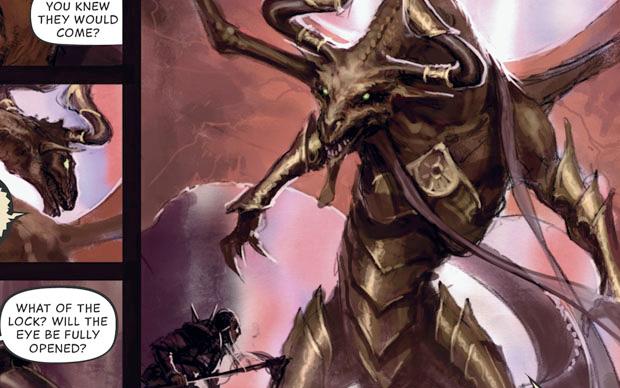 Ah, Wil, a fan of the constructive side of flavor I see. By feeding on the power of Alara's mana, Bolas forestalled the post-Mending crumbling of his mind and body for a time—but his plans go much deeper than that. We didn't see him directly on cards in Zendikar Block, but he was active there through his instrument Sarkhan the Mad. Bolas will play a central role again, but he often prefers to work his schemes from the sidelines. I can't give you much in the way of specifics, but we have plans for Nicol Bolas for years to come.