t was just over five years ago now that Matt Cavotta introduced Taste the Magic, the first Magic flavor column on magicthegathering.com. (Everybody feel the chill hand of Father Time? You're welcome.) It feels satisfyingly full-circle that my buddy Matt, whose text-wrangling job I inherited, is back inside these Wizardy halls again. Matt is now hard at work behind the scenes, keeping the aesthetics of Magic strong as the game grows. So clinkety-clink with the Champagne and all that, and here's to the next five years of mouthwatering Magic flavor, and to bizarro Future Sight flavor texts we concocted paving the way for entire block stories. May River of Tears and his peculiar prose see print again someday, and may heaven have mercy on us when he does.

Anyway, I wanted to celebrate this five-year flavor-column milestone by returning a feature that Matt Cavotta debuted way back in 2005. It was one of my favorite features as a reader, and I'm excited to welcome it back into the spotlight. It's called Okra-Twinkie-Tofu.

As the Cavottinator explained in his second column ever, Magic cards are laden with words that you don't encounter much when you're not slinging spells. Okra-Twinkie-Tofu breaks down these exotic words into three categories:

In this increasingly food-source-aware world, this world of locavores and Michael Pollans, this awareness of authenticity means more than ever. Plus, Scars of Mirrodin is a diverse smorgasbord of exotic morsels of text—a feast tailor-made for Okra-Twinkie-Tofu. Let's chew into it.

Shikari: Sunspear Shikari
An exotic but real word. "Shikari" is a big game hunter in India, a term we borrowed to mean "leonin weaponmaster who hunts on the ground" (contrasted with the skyhunters). Leonin Shikari from the first Mirrodin block paved the way for this tidbit of leonin cultural flavor.

Ish Sah: Throne of Geth (in flavor text)
Ish Sah, the name for Geth's lair in the Mephidross, is entirely made up. It has an unsettlingly respiratory ring to it, almost like the sound of a labored inhale and exhale—it was designed to sound creepy.

Loxodon: Loxodon Wayfarer
Loxodon, the term for Mirrodin's elephantine humanoids, isn't an Earth word. But it's derived directly from a real-world source. The genus of African elephants is Loxodonta, from the Greek meaning "slanting tooth."

Scoria: Scoria Elemental
Although this looks like a made-up proper noun, scoria (SKAWR-ee-uh) is a type of volcanic rock. One type of scoria, reticulite, is very porous and light, composed of delicate threads of cooled lava. You might even say it had very low toughness. Nobody liked the name "Reticulite Elemental," though. 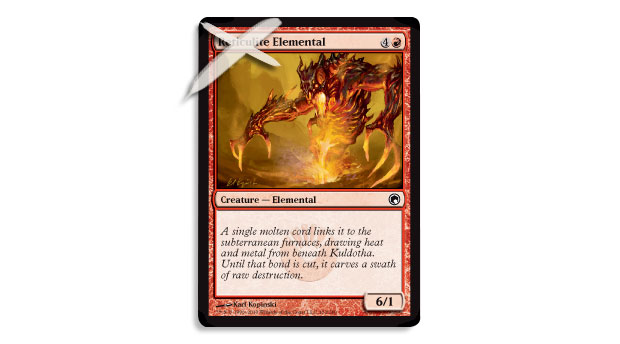 Tel-Jilad: Tel-Jilad Defiance, Tel-Jilad Fallen
Tel-Jilad is totally made up. It refers to the Tree of Tales, the greatest tree of the coppery "jungles" of Mirrodin, and those elves and trolls who defend the lore etched into its surfaces. All fluff in that word—100% Twinkie.

Myr: Gold Myr and many others
The term myr comes from myrmidon, which is a henchman or follower—appropriate for this race of eager-to-serve artifact creatures. The lower case comes from the proper noun Myrmidon, which was a warrior tribe of ancient Greece that fought in the Trojan War. Interestingly, in Greek myth, Zeus made the Myrmidon people from a colony of ants; the dedicated workers among the myr resemble ants, and the word Myrmecia is the name of a genus of ants.

Arbalest: Heavy Arbalest
An arbalest is a real word for realzies. It's a version of a crossbow, but much larger and with greater tensile strength, due to having a metal "bow"—and certainly a Mirrodin crossbow is going to be made primarily of metal. As you know if you've seen this guy equipped to a Soliton, this thing is serious ordnance. The word for somebody who uses an arbalest? An arbalester. 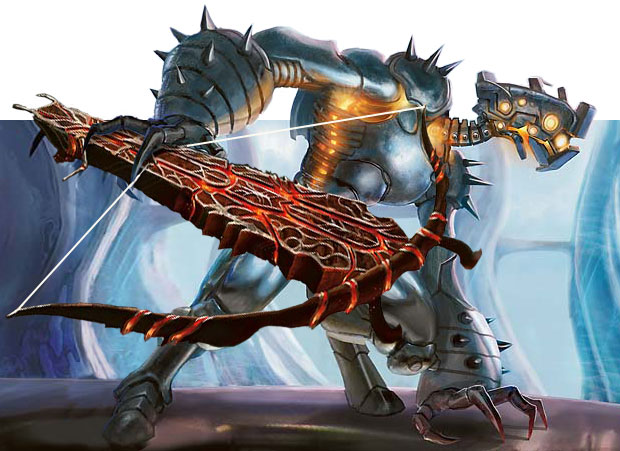 Skithiryx: Skithiryx, the Blight Dragon
No substance here. Appropriately enough for a Phyrexianized dragon, this word was developed in a lab from all-synthetic chemicals. The mad scientists' goal was not, believe it or not, to create the world's hardest-to-spell legend name, but rather to forge a name full of disconcerting, skittering, spider-crunchy sounds.

Auriok/Neurok/Moriok/Vulshok/Sylvok:
These are the terms for the five color-aligned tribes of humans who dwell on Mirrodin. These words do not dwell in dictionaries, but they are all derived from real-world roots anyway. The "aur" in Auriok is from the Latin for gold. The "neur" in Neurok is derived from the same root as neuron—appropriate for those knowledge-obsessed blue wizards and rogues. The "mor" in Moriok is from the Latin "mort," meaning death. The "vul" in Vulshok derives from the Latin "Vulcanus," the Roman god of forging and volcanoes (which in turn gave us our word volcano itself). And Sylvok originates again from the Latin, from "silv," meaning forest.

Trigon: Trigon of Mending and others
This is a fancy word for a plain old shape—a triangle. All the trigons in Scars of Mirrodin enter the battlefield charged up with three counters, and the art of each card in the cycle shows a small artifact with three sides. A trigon is also a type of triangular-bodied lute or harp in classical Greece and Rome. 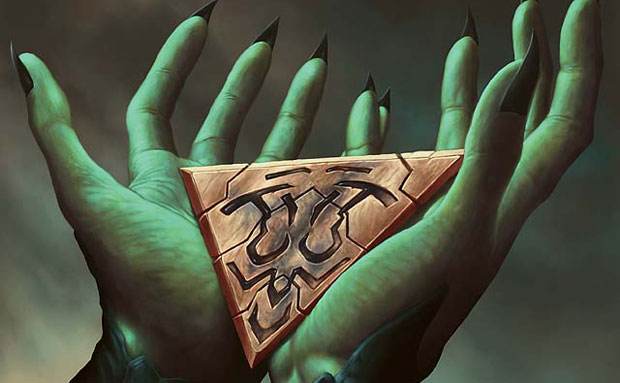 Nim: Contagious Nim, Nim Deathmantle
Nim is an archaic English word meaning "to steal," and it's the name of an ancient game of strategy. But I think those are both just coincidences of the breadth of this word-chocked language. The nim of Mirrodin, undead creatures that lurk among the necrogen mists of the Mephidross (both Tofu words themselves), are not particularly theft-prone or strategic-minded.

Soliton: Soliton
As revealed in this Magic Arcana (and the flavor text), Soliton is an artifact creature that represents an independent half of a Gemini Engine. We tried several attempts—some sillier than others—to name this long-lost twin, including Monad, Unarius, Riven Geminus, and Singulus Engine.

Praetor: Hand of the Praetors
A Praetor is a Phyrexian of high rank and great power, but it's also an old term for a judicial magistrate in the Roman Republic of old. Riffing on this Latinate Okra flavor is Carnifex Demon, whose first name is a Latin term for an executioner. Carnifex, from "carnis" and "facere," literally means—and I grimly love this—a "maker of flesh." Chop off somebody's head and what have you made? Meat. That is some Phyrexian-style logic—and surprising Okra etymology—right there.

Ezuri: Ezuri, Renegade Leader
The name "Ezuri" is artificial to the core, but the elvish leader Ezuri is anything but. Like many of his elf brethren (and, um, sistren), he's dedicated to the crushing of unnatural artifacts to restore the primacy of nature. It's a good thing they're dedicated, because they have their work cut out for them on a world made of metal. 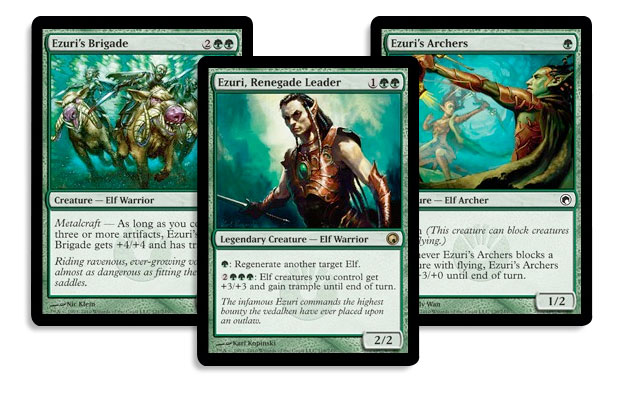 Ferrovore: Ferrovore
The name of this iron-eating beast is made up of the Latin roots "ferrum," meaning iron, and "vorare," meaning to swallow or devour. A minimally processed product of natural ingredients—Tofu style. Note that Magic has occasionally brought together compound words (and portmanteaux—thanks to reader Aaron Q. for pointing out that "Artismither" in my last column is actually a portmanteau) that would drive some sticklers batty. I mean compounds that are composed of one Latin root and one Greek root. For example, the card name Sangrophage derives from the Latin root for "blood" and a Greek word for "thing that eats." But what was Time Spiral supposed to do? Sangrophage was riffing on the Exodus card Carnophage, which committed the same kind of cross-classical conjunction. Sorry, Classics majors! 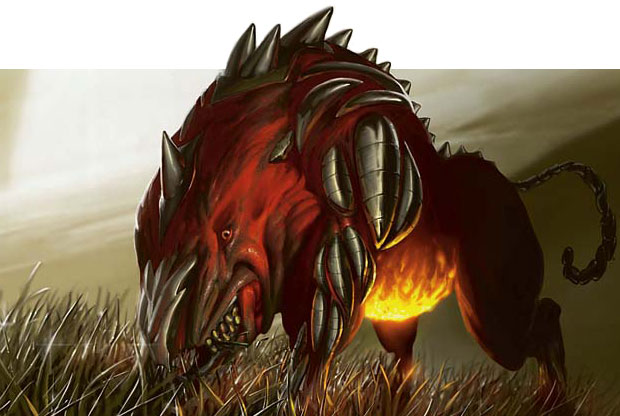 I still missed some exotic words in Scars of Mirrodin, like Culling Dais, Oxidda Scrapmelter, Argent Sphinx, Vedalken Certarch, and Fulgent Distraction—I live it as an exercise to the reader to determine which are the Okras, Twinkies, and Tofus.

Most people's vocabulary consists of a few thousand words. But some of us delve deeper, discovering terms that enlarge our lexical world. Magic is intrinsically hungry for words; because we keep going to new worlds and discovering new hunks of spellcraft all the time, the game has a powerful need for fresh terms, and so we go beyond that few thousand words. But it's not just practical to quest for peculiar words, as Matt and I have been talking about for the last five years. It's rewarding, and it's enlightening, and it's fun.

Dear Doug Beyer,
Regarding your article "Spreading the Infection":

I would like to complain about the publicity stunt you folks pulled a few months ago. In preparation for the Phyrexian infection of Mirrodin, a little company called BP caused one of the greatest disasters in our civilization's history. Turning the Gulf of Mexico into the Darkslick region of the Quicksilver Sea? Not cool. Next thing we know, Wizards is going to release avian bird flu all over the northwest so hummingbirds get turned into thrummingbirds and I'm just so upset that Magic: The Gathering would be responsible for the downfall of an entire planet. Point made! We get it. Scars of Mirrodin is here. QUIT PUSHING IT
--Karl B.

Well said, Karl. :) Because we work so far ahead of when sets actually release, we of course had no way of knowing that the spill of our lifetimes was going to occur right before the release of a set full of oil-mutated zombie-birds, ichor-coated rats, and the "Darkslick." But in a general way, the themes of an epidemic of technology impacting an unsuspecting world are definitely part of the inspiration for Phyrexia. The juxtaposition of our return to Phyrexia and the BP disaster was an accident; the relationship between the themes of Phyrexia and that kind of unchecked industry was not. 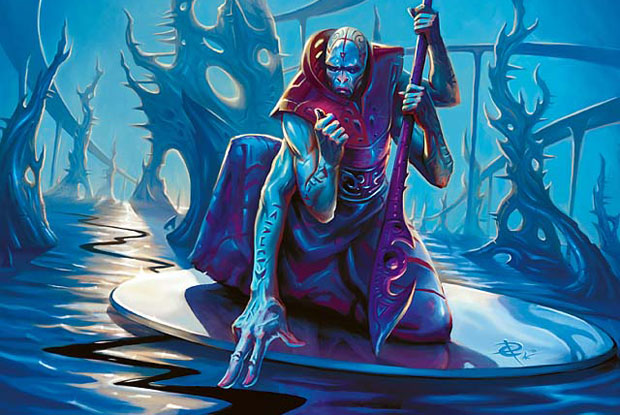 Phyrexia is a civilization inside the Multiverse, but it's also commentary on what can happen when you combine powerful technology with errant ideology here in the real world. Creation generates power; power generates responsibility; responsibility generates choices—and Phyrexia is one possible result of those choices. Remember, Yawgmoth was originally a medical doctor. His understanding of the workings of the flesh could have led him to become a great healer, a force for light and life in the Multiverse. Instead he chose to use his brilliance to create plagues and poisons (and phthisis), ultimately leading Phyrexia in one of the most destructive, murderous invasions the Multiverse has ever known.

That's the value of the villain, Karl. That's the value of fantasy itself. We get to run the experiment in a safe, controlled environment, to trace out laboratory consequences that would be too dire for our world—even more dire than the Gulf of Mexico. We get to pose real problems to ourselves, make fictional choices about them, and see—really see, in venues like card art and flavor text and stories—where those choices would lead us.