Another solid week of voting has produced another batch of results in our Selecting Eighth Edition promo. In the battle of the three-mana artifacts, Ensnaring Bridge walks away as the winner over Static Orb. The Bridge has always had potential in Constructed, and I suppose players have had their fill of Static Orb with the recent rash of Opposition decks. Or maybe the Bridge is just cooler.

On the art side, the Matt Wilson Telepathy from Urza's Saga beat out the newer art, making the tally 4-0 in favor of old art. Will the trend be broken? We'll see at the end of twelve weeks.

Now that the FlavOracle is up and running again, we're ready to start accepting submissions for flavor text for six cards that will appear in Eighth Edition. For four of the submissions, we want flavor text written by players, and for the other two we want to see real world quotes (more detail on that to follow). The first card up to bat is Aladdin's Ring, which debuted in Arabian Nights and has been in the base set ever since it was eligible in Revised. The Eighth Edition version will feature Dave Dorman's art that debuted in Seventh. We want made-up text for this card, so no real world quotes, please. 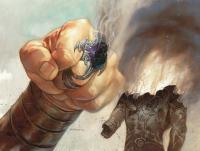 Rei Nakazawa, one of our creative people here, offers some tips to writing flavor text. Flavor text should:

The creative team will whittle the entries down to about ten acceptable ones, and then those will be put to a popular vote. The winning text will appear on Aladdin's Ring in Eighth Edition! Submit here! One submission per person, please.

Moving right along… This promotion has sparked talk of what Eighth Edition will be like across message boards all over the Internet, and our mailboxes have been filling up with requests and questions regularly. One big concern of players seems to be the fate of Birds of Paradise, as typified by this email from Marvel S. of Jakarta, Indonesia:

"Since Magic players are allowed to participate in the 'Spend Your Summer Selecting Eighth Edition' program, I think it's ok to tell us whether Birds of Paradise will be reprinted or not. Rumors and speculations have run rampant throughout the 'Net with complete uncertainty and confusion for quite a long while. A reliable source of information and official confirmation from R&D is desperately needed. Thank you for your time and attention."

Well, the best answer as to Birds' fate seems to be… You tell us.

Either Birds of Paradise or Llanowar Elves will be getting the squeeze in the next rotation, and we've provided their potential replacements as part of the package. So what will be in Eighth, Birds of Paradise and Vine Trellis or Llanowar Elves and Utopia Tree? One green producer and one five-color producer, but which ones? How important is the ability to attack for one? Don't miss the opportunity to vote on this one, as it should shape for years to come.

After all that, I admit the art vote is a bit of a downer, but hey, even the small decisions need made. Which version of Spined Wurm should appear in the next base set, Keith Parkison's from Stronghold or Carl Critchlow's from Seventh Edition?

Vote, and then tell your friends to register and vote! All the relevant info is summarized on our promo page. Don't forget to check back in a week to see which white enchantment wins (Noble Purpose or Orim's Prayer), and what new votes we have in store…

I may be reached at editor@wizards.com.