There's just something about Blood Moon. Maybe because it was the first card made to specifically thwart non-basic lands, it sticks in players' heads. It was popular in The Dark, it was popular when it was reprinted in Chronicles, now let's see if it's popular when it comes back again in Eighth Edition.

The art vote between the two versions of Phyrexian Colossus was about as close as a vote could get… and the Seventh Edition one wins by a nose! Well, I'm sure Mark Tedin would have been happy either way.

This week will be the last week for submitting flavor text. We've done an artifact, a red card, 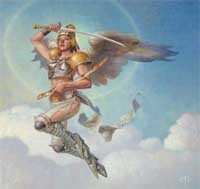 a black card, a green card, a blue card… must be time for a white card. And what a white card it is, the iconic Serra Angel. Serra will be appearing in Eighth wearing her designer outfit by Mark Zug that debuted in Seventh Edition. What should her new flavor text be? That's up to you. Submit your thoughts here.

The card vote this week is between two green creatures with an appetite for enchantments: the Legends favorite Rabid Wombat, or the Urza-block beatdown machine Yavimaya Enchantress. TheWombat can get bigger, but only when local enchantments are put directly on it. The Enchantress is a mana cheaper, but it's hard to compete with a wombat in the "cool" department. What do you think?

The art vote is also for a green creature, the 3/3 vanilla Trained Armodon. Hey, Call of the Herd isn't going to be around forever! The choice is between the original Tempest art and the Seventh Edition art.