elcome to the third week of Selecting Ninth Edition! Following on the heels of the hotly debated Blinding Angel vs. Dawn Elemental vote, this week features another choice that's likely to generate a lot of discussion. So how did last week's vote turn out? 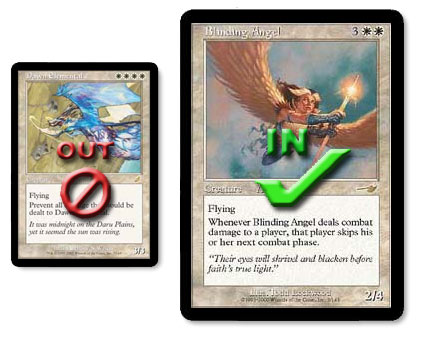 Blinding Angel takes it in a close one!

This week you'll be choosing between two very different sorts of countermagic. Memory Lapse, the veteran from Homelands, has appeared in five sets so far, including three core sets. A popular card that's seen plenty of play, it's a dependable delaying effect that can be used as a powerful tempo weapon. Pitted against it is upstart Mana Leak. Though hailing back to the Stronghold set, Mana Leak has appeared in just one set since (Eighth Edition), but it's also seen plenty of play. Though not as potentially useful in the later stages of duels, the effect from Mana Leak can be very powerful in the early stages of the game, potentially stopping key spells dead in their tracks.

So which will it be? Two tournament-level blue instants with the same casting cost, both splashable, both having seen plenty of play, and both able to tell your opponent "no" in their own unique way. Will it be the early game stopping power of Mana Leak, or the reliable delaying power of Memory Lapse? 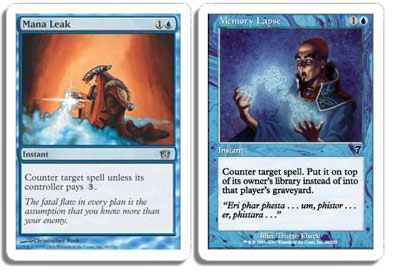 Thanks for making your voice heard. We’ll see you next Monday (and every Monday through September 6th) with even more important changes to your next Core Set. Don’t miss it!