week's card vs. card was hotly debated on the message boards, and a vote that some thought would (or should) be a blowout came in even closer than Hurricane vs. Earthquake, showing once again that just because a card doesn't work for some players doesn't mean there aren't others that love it. 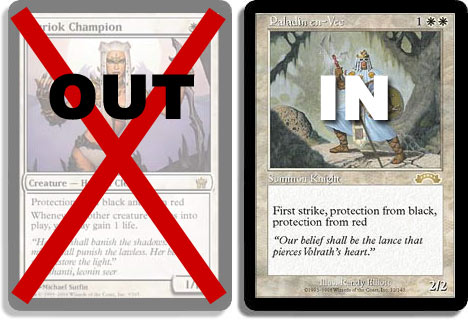 This week it's up to you to choose between biggie size beaters for one of green's creature slots.

Last week you voted on the lands of Ravnica, and there were two clear favorites!

As far as Ravnica was concerned anyway, Stephan Martiniere and Richard Wright were clearly king. What happens this time around? The block with the second-most votes for basic land art was Invsaion!

So, just like last week, for each basic land type, you'll pick your favorite. This time around, the top Plains, Island, Swamp, Mountain, and Forest from Invasion will have their art appear in Tenth Edition. Here are the pieces you'll be choosing from.

To vote in the polls, you'll need to use your message boards account. If you don't have one yet, you can go here to create one. Once you've done that, or if you already have an account, you're all set. You've got until the site updates Sunday night to get your vote in, so click the link below to launch the polling page and go make your voice heard!