week the first sketch vote results are in along with the winner for the equipment card vs. card vote, we finish up the final round of basic land art voting, we've got a new card vs. card vote we think will raise many eyebrows, and even more. All set?

Like the Week 3 vote, this card vs. card clash wasn't close. 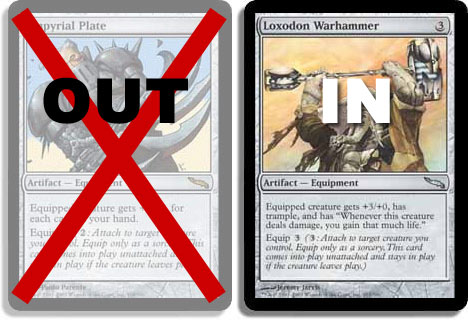 Despite how it may seem to some, when putting together a set every slot is important. That said, some choices are more high-profile than others. With that in mind, we're pretty sure the one we've got planned for you this week is pretty spicy.

Last week you voted on the art from Kamigawa's panoramic basic lands. The closest vote? Turns out even John Avon has trouble beating John Avon in these things! Here's how it all came out once the dust had settled.

This week you'll finish up the basic land votes by choosing from the block that got fourth in overall votes.

Remember, for each basic land type you'll pick your favorite. The top Plains, Island, Swamp, Mountain, and Forest from Urza's Saga will get their art reprinted in Tenth Edition. Here's what you'll be choosing from.

Last week you chose between Mike Sutfin and Dave Allsop for sketches of how Lord of the Pit would look in Magic's next core set. For this one, it was "Sketch A" by Mike Sutfin that took the honors in what turned out to be a very close vote.

This week, you'll be choosing between sketches for Fountain of Youth by Dan Scott and Anthony Waters.

To vote in the polls, you'll need to use your message boards account. If you don't have one yet, you can go here to create one. Once you've done that, or if you already have an account, you're all set. You've got until the site updates Sunday night to get your vote in, so click the link below to launch the polling page and go make your voice heard!