down to the last three weeks of voting! Over these final weeks we'll have three votes for flavor text as well as the final card vs. card and sketch decisions. And, in the final week, you'll get the fun chance to make your first decision as a Magic Brand Manager. So, if you've just been a spectator so far, your window for influencing Magic's next core set is rapidly coming to a close!

Last week, the readers of magicthegathering.com got to sink their teeth into the giant Dragon vote. With 11 options to choose from, there were two clear leaders, but only one gets the slot and dragons don't deal in runoffs. 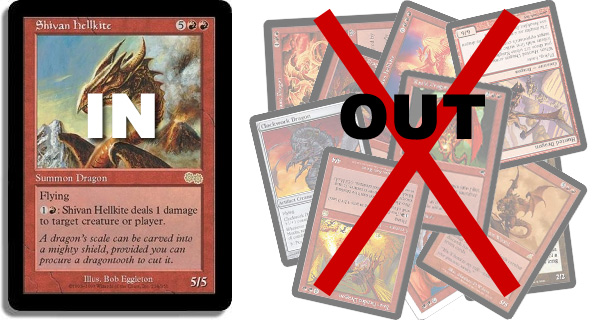 This week it's back to a good old fashioned one on one. Both of these cards have a big following, but only one can be printed in Tenth Edition. 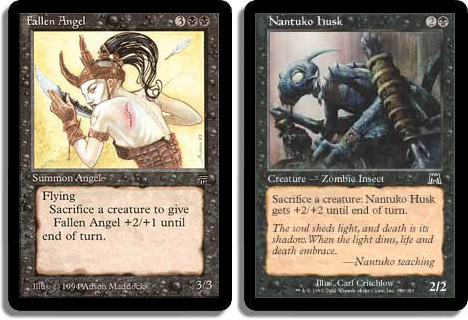 Nantuko Husk is simply way more powerful than Fallen Angel. That is the key to this week's vote. (Did you think it was sex appeal?) Nantuko Husk is the type of card that can be available in Standard or Extended, gaining dust for a year, and then suddenly be in the best deck. Cards that, without warning, redefine a format due to a new set release or new discovery add to the fun and diversity of Magic. That extra two mana in the cost of Fallen Angel prevents her from serving in this role as well as the Husk.

I fully appreciate that the stars are currently aligned just so, and Nantuko Husk is the centerpiece creature in one of the top decks in Standard right now. Congratulations, Senor Husk, but you still aren't anywhere near as cool as Fallen Angel. Fallen Angel was a tremendous hit when it first debuted in Legends, and I flipped my lid when I got one out of a Chronicles pack. No, it isn't one of the most powerful creatures in the game, but it screams “Magic: The Gathering” so much more than some goofy 2/2 Zombie Insect does. Vote for Fallen Angel, and let the next generation of beginners “ooh” and “ahh” at her evil majesty!

For last week's sketch vote, it was Aleksi Briclot and Tom Baxa battling it out for the right to illustrate the Tenth Edition version of Story Circle. In the end, it was Briclot that cane out on top.

For this week's artist sketch it's Daren Bader against Christopher Moeller, with sketches of the new Nekrataal for your voting pleasure.

For Tenth Edition's three flavor text votes, we'll be turning you over to flavor gurus Matt Cavotta and Doug Beyer. Here are Doug and Matt's comments on the first card you'll be considering for flavor text.

Doug: Creative text for a Core Set undergoes a different process from a set of all-new cards like Dissension or Coldsnap. None of the cards get new names, and only some of them get new flavor text. And some cards, like today's flavor showdown card Glorious Anthem, already have a few different solid pieces of flavor text to cherry-pick from past printings (oh, and news flash: Glorious Anthem is in Tenth). In each of the three Selecting Tenth Edition flavor text votes we'll be dealing with a different kind of flavor text decision. Today, we cherry-pick from existing pieces.

Holgred, Paladin en-Vec: We paladins are not the sort to boast, but I think it dishonest to censor my feelings about the Ballad of the Paladins. I do believe it to be a most inspiring song, woven with the delicate thread of rhyme. I am no man of letters—I am a man of faith and steel, but I do believe this to be the finest of the three pieces.

Doug: Of the three, I like Glorious Anthem's original flavor text from Urza's Saga best:

First off, it hits some verbal high-notes that draw the eye—words like “battle” and “angel” make good first impressions and tie the card both to white's identity and to the card's role in a creature deck. And then when you settle in and think about the idea behind the piece, it tells a story about how the card does what it does and makes a solid connection with the art. Why are all my guys +1/+1? Dude, it's an angel's battle song. Specifically, the battle song of that really cool Kev Walker angel, right there in the art. Her battle song has pervaded your faithful minions down to their little (now slightly less little) hearts. This really cool angel imagery also makes Holgred's pick seem even worse. “Ballad of the Paladins”? What paladins? Move over tin cans, and make room for the real White baddies, the angels.

It's not often that a one-liner comes off without its tongue jammed in its cheek. This one does it, and has quite a bit packed in its six words in the process. What I like most is that it suggests a “living” nature to the Anthem--that the song grows in glory and length each time its words propel combatants to victory. I also like how this, in combination with the angel in the art, suggests that the angels are the bards, the chroniclers of this grand and growing epic song.

The other thing it has going for it is its complete lack of lame rhymes (see above.) You know, I may not swing the steel like Mr. En-Vec (unless you count an aluminum bat, Go Wizards softball team!), but I do swing words a bit and I can see clunky rhymes a mile away. (Now I am going to grab my trusty Easton just in case Holgred comes to pick a fight.)