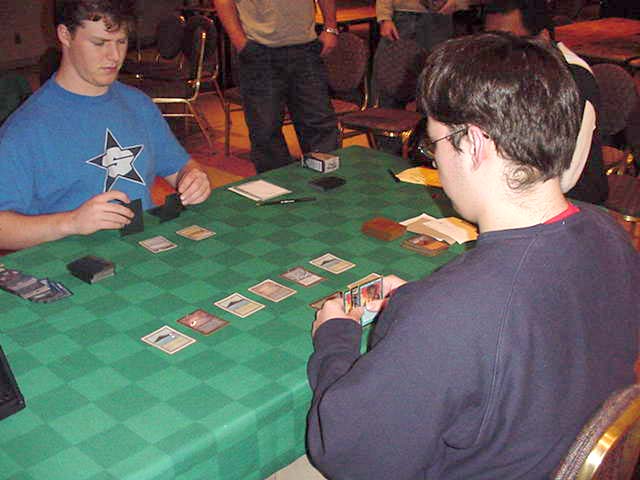 Ben "Superman" Rubin may not have had the best results on the Tour recently, but his Masters victories speak of his place as one of the game's best. Today he is with Super-Gro, a modification of Alan Comer's Miracle-Gro deck that includes white for Swords to Plowshares and Mystic Enforcer. Unfortunately, he's run into a nightmare matchup in Josh Smith. The Bostonian is playing a unorthodox blue-black-green control deck designed to smash Gro in all its forms. These two met during round ten, and Smith demolished Rubin 2-0.

Both players kept a cautious play speed. Rubin's Looter was Edicted immediately, and Smith stripped him of a Force of Will with Duress. However, he couldn't stop a Meddling Mage that hit play naming Pernicious Deed. Werebear also resolved. Smith had another Edict, taking out the Bear. Rubin also resolved Winter Orb, but refused to smile.

Desperate to stop the Mage beats and off the Orb, Smith tried a third Edict. Rubin pitched his whole hand to foil it. Smith Blessed the Edicts back in and waited. For three turns, neither player acted, Rubin content to attack for two. Finally, Smith pulled an Edict, which resolved.

Again, a pause. Rubin pulled up Looter, but decided to hold it to support Force of Will. He drew Gush and put the Looter into play. Smith let it in, and tried a Deed on his turn with two mana up. Rubin thought hard. Eventually, he decided to gamble on his Gush. It turned up land and Mystic Enforcer. He sighed as he said "Deed resolves."

Now the whole character of the game turned around. Smith Deeded at end of Rubin's turn, and enabled his eight mana. He Duressed Rubin's Force, seeing creatures lands and a Plow, and resolved a second Deed before passing it back. Meddling Mage forced the Smith to blow the Deed. 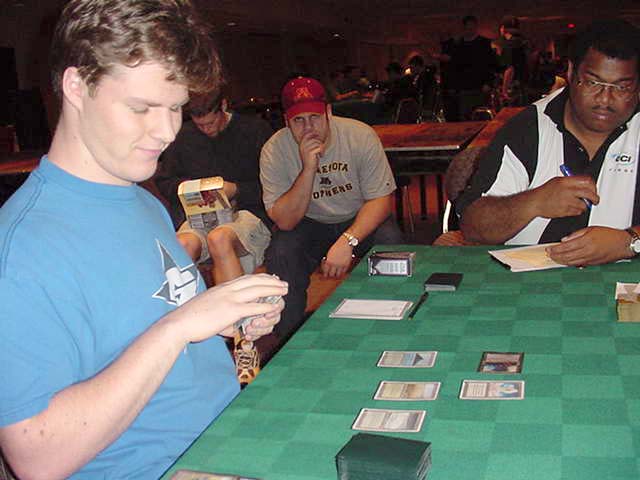 Another Mage from Rubin caused Smith to play Fact or Fiction, seeing two Finkels, Brainstorm, Bad River and Force of Will. He scored the three card pile and played Counterspell from hand on the Mage. He even had another Counter for Rubin's Werebear. Then he went so far as to Duress a Plow, seeing just two Enforcers, and Waste Rubin's Tropical, leaving him with three land. Down came Finkel.

But Rubin was not to be denied. He willed an island to the top of his deck and slammed down his 6/6. Smith calmly Forced it. He did the same to a Meddling Mage the following turn. From there, Jonny Magic had provided more cards than Smith knew what to do with. Winning was academic.

Smith hoped to steal Game 2 early by Wasting Rubin's Flood Plain. Rubin was ready for such a possibility with a Tundra and Brainstorm. His Land Grant met Force of Will, and the game slowed. Two turns later he'd turned up a Tropical Island, and busted out Hidden Gibbons. Smith came back with Finkel.

Rubin Plowed it at end of turn, stopping Counterspell with Force of Will. He smashed in with his Gibbons. Smith Wasted his Tundra and tried a Deed. Rubin Annulled. Edict removed the Gibbons. Rubin continued to press, this time with Quirion Dryad after Flood Plain got him another land. Smith Forced, leaving just two cards in hand. Rubin Gushed into Werebear.

On the ropes, Smith played Fact or Fiction. It was not gangbusters. He was given the option of Edict, or three land and Disrupt. He chose the larger pile, fearing Rubin's full hand. He Submerged the Bear to buy time. Rubin replayed it. Smith stalled with Submerge again, and managed to find a Force in time to stop Quirion Dryad, and a Deed to take out the Bear, but Rubin didn't stop drawing threats. A second Bear went the distance. 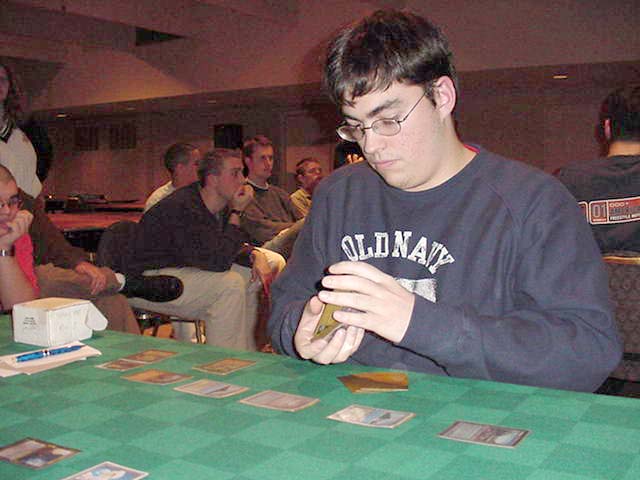 Brian Kibler drifted past before Game 3, cheering Rubin on with hopes of an "All Super-Gro Finals". Rubin concurred, but his heart wasn't in it.

Smith started with Keg. Rubin Forced. He resolved a Mage naming Pernicious Deed, but it fell to an Edict. He did manage to save his Tropical from Wasteland thanks to Gush, and got a Gibbons into play, but couldn't counter Finkel.

Werebear wasn't threatening with just four cards in Rubin's graveyard. Smith had a Keg anyways, and it resolved. Rubin put two in his pool and Gushed, saying "C'mon, baby!". His deck was kind, giving him a Meddling Mage to stop Counterspell. The way was thus cleared to Plow Jon.

Smith slowed Rubin by Wasting his Tundra, taking an extra three from the Bear in the process. The Keg dispatched Rubin's troops. Rubin's next Werebear was Forced, bringing the Gibbons online. Smith struggled for control. Edict resolved. Finkel resolved. He had one card in hand. All Rubin could muster was a Brainstorm into Looter.

Smith dropped another Finkel. His next attack gave him a second Edict, dispatching the Looter. Rubin replaced it. However, Looting can't keep up with drawing two for long. Smith's hand was jam-packed, and Rubin soon extended the hand.