Indestructible is a powerful word in Magic. Its meaning, like many of the names of abilities and characteristics, is obviously clear: this cannot be destroyed. Introduced in Darksteel, and evolved into its repeated appearances since, cards featuring text reminding us that we "don't destroy it" seem like something special. Even something lowly like a Darksteel Relic can be pretty snazzy (it was the potential gift from the home team if they had taken the Magic Online 2011 Community Cup, after all). 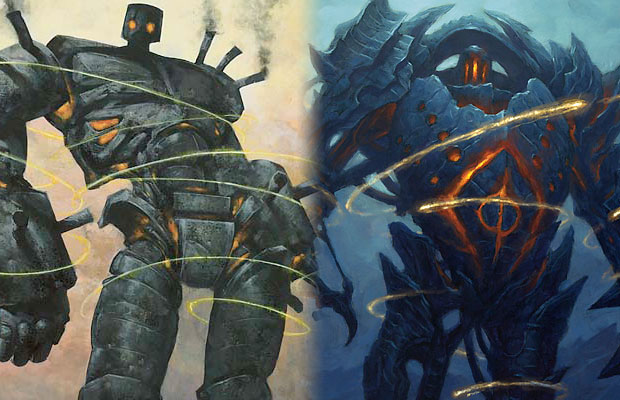 Metalcraft-assisting booby prizes aside, the idea of indestructible is contingent upon what is indestructible. An indestructible Island is considerably less sexy than, say, a Darksteel Colossus (or its evil brother Blightsteel Colossus). Thanks to Shield of Kaldra, Darksteel Plate, and Withstand Death, creatures have been the primary beneficiary of getting in on the anti-destruction action. I've even come up with creative ways to play all of those cards, too.

But what if we could make any permanent indestructible? What would it mean to have some sort of "guardian angel" that could appear for our favorite permanent, of any type? What would be possible with such a powerful blessing from beyond?

You'll have the chance to find your own answers to these questions once Magic 2012 releases. Let me introduce you to :

When I first saw Aegis Angel my reaction was to try to figure out clever ideas to our first question of making any permanent indestructible. I'll get to some answers on that later, because it's in the realm of making certain things possible that I believe the Angel will work best.

What do I mean? I mean she's got a talent that not so many Magic cards have: making multiplayer games an order more exciting. Her rules text doesn't say "your" or "you control," but is specifically open for any other permanent to be given the darksteel feel. This is significantly more useful thank you might think.

For starters, you can protect your stuff.

I firmly believe that the desire to attack and block is proportionally related to the "awesomeness" of your creatures: the more awesome it is, the more you want to use it. Critters like Verdant Force, Felidar Sovereign, and the new Mana-Charged Dragon scream to be included in decks, and protecting them so they can safely attack and block makes the decision to do so the always-obvious choice.

If you have an effect you absolutely must keep around, our Angel of safety can ensure we get to keep it. Powerful plays like Doubling Season, Rings of Brighthearth, and the new Martyr's Bond come with amazing potential that opponents are often all-too-eager to break up.

Sometimes, all you need a short-term insurance policy to have something survive. Whether it's the pieces of a powerful mana-generating engine (Cabal Coffers / Magus of the Coffers + Urborg, Tomb of Yawgmoth), a tool for some recursion (Volrath's Stronghold or Academy Ruins), or even some icy invulnerability (thanks to Glacial Chasm), you may only need a turn or two of protection to get the job done. After all, our Aegis Angel doesn't do the job of protecting herself. 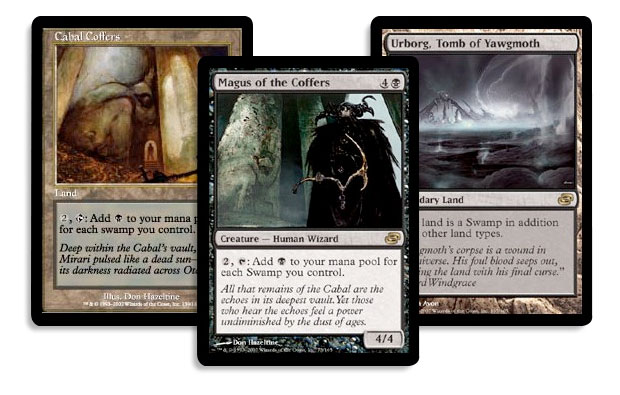 But that can be adjusted. Consider for a moment if we wanted to protect other players' stuff.

While this likely won't be the case in a heads-up duel (aside from corner cases of an opponent with something like Phyrexian Vatmother—and even that doesn't work if there's a sacrifice effect on the other side of the board), interfering with the designs of other players can earn a lot of protective good will. When another player is struggling, or on the way out thanks to a third player's efforts, giving the weaker a helping hand is an excellent way to keep the oppressor off balance. And there's often nothing less than awesome about a board bully getting his or her comeuppance from a former target. Take that!

While it may not be immediately apparent, using Aegis Angel to keep Arashi, the Sky Asunder or Avatar of Woe available can also help suppress a more dangerous opponent as well as befriend the player with a sniper rifle for creatures. If someone has a Howling Mine, Rites of Flourishing, or something else sweet you like hanging around, protecting it feels good. Just because the card isn't sitting on your part of the board doesn't mean it isn't worth considering. 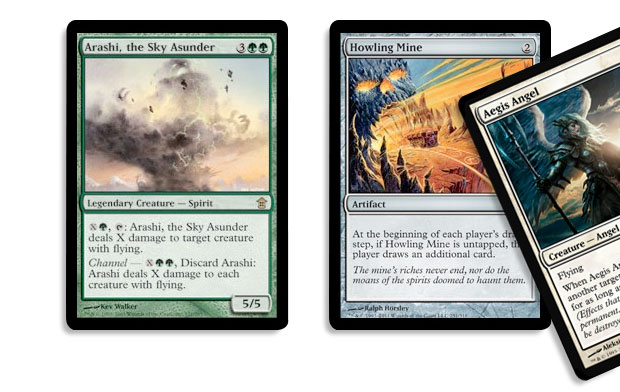 And things get even better when there are actual allies about. If you've played Archenemy you can appreciate wanting to protect someone else's stuff. Two-headed Giant, Emperor, and other ally-inducing ways to play also benefit from mutually assured anti-destruction. Teamwork that comes on a 5/5 flying Angel certainly seems like a heavenly gift.

I'm rather fond of the word "shenanigan," as it perfectly suits the feeling of experiencing interesting events in Magic. The word itself is interesting to say. It references interesting movies. Maybe I'm just too interested in the stuff I find interesting, but Aegis Angel has a whole other side to its already impressive coin. Let's talk shop about making the most of our Angel du jour.

If we can have one Aegis Angel to protect something, why not another to protect the first? While it's possible to do this the regular way through playing multiple copies, upping the ante with multiple copies of things that copy creatures replicates the effect assiduously. Did you follow that?

Clone, and its many cousins in Phyrexian Metamorph and friends, can serve as additional Aegis Angels. Chaining them together can create a cascade of creatures that can only be destroyed one at a time. Day of Judgment, Nevinyrral's Disk, and any other effects that destroy an entire board will find it much trickier to get the job done.

And Clone can copy something of an opponent's for you to protect with your Angel, as per the usual uses of our copycat friend.

Protecting your investments is a common theme in multiplayer decks. While fearlessly running your guns out into full view of the enemy is a fast, loose, and refreshingly fun way to get down in games, there's also a lot to be said for being careful and deliberate.

When you "borrow" something with a Control Magic effect, or force your will onto another's creature with a Vow, the risk of it backfiring is pretty good. Revoke Existence, Sylvok Replica, and even good old Naturalize can wreak havoc on otherwise dependable enchantments and artifacts. Aegis Angel is a fantastic insurance policy for these things because of the nature of spells.

Other than the relatively small family of Maelstrom Pulse and Vindicate effects, opponents will be forced to use different cards, and likely different colors, to get the job done. It's one way to slow down an opponent while keeping up with your main plan.

Instant-speed Flicker effects are another excellent way to make the most of our anchoring Angel. The flagship way you might want to do this is through Momentary Blink. Did they get rid of what you were protecting some other way, despite the prohibition on destruction? Is there something new you want to shield? Give our Angel a quick flick and all is right in the world.

Ghostway works fairly similarly, as does the entire family of Otherworldly Journey and Astral Slide effects, and gives you your Angel back at the end of the turn. This, too, can create situations where you opponents want to kill your Angel, but really can't—and also don't have the muster to take out something indestructible.

Bouncing it out of play to come back in isn't the only way to make having priority a fun time. Classics like Elvish Piper and Magic 2012 returner Quicksilver Amulet let us make our Aegis Angels at the speed of Doom Blades. If your opponents are apt to engage with firepower, coming back with superior shielding to surprise them only seems fair.

As a bonus, these types of cards let us use cards like Boomerang and Whitemane Lion to their fullest. Repeatable protection against anything that attacks our permanents is certainly spicy.

Willbender is a very special card for Aegis Angel. As far as I can tell (and please share other ways if I'm wrong!) it's the only way that we could redirect our target of protection wherever we want on the fly. Sneaky characters will use the "shields down" window where the Angel is in play but our target isn't yet indestructible to disrupt our plan. Willbender can not only point the disruption elsewhere but also change what's about to becomes indestructible if we otherwise can't or don't want to save it. (Spellskite can pull off a similar trick, but with less versatility.)

It's important to note that Aegis Angel's wording prevents us from bending its trigger back upon itself (specifically, the "another" part of the targeting requirement), but being able to make a save in a moment where we'd otherwise lose the reason we're playing the Angel is definitely solid.

So where does Aegis Angel fit best? That's entirely up to you, although I suggest the Commander format and the "Heavenly Inferno" deck as a good start for tinkering with it. But it just wouldn't be a usual preview from me without an unapologetically hilarious idea deck to maximize our entertainment. I can imagine something like this being used for full effect in a multiplayer game:


Since most of our interactive elements for Aegis Angel were along the white-blue line of things, I landed on a deck geared to engage in some antics with those colors. Between the various Clones, ways to bounce some or all of the team, and Frost Titans to ensure we always have something to run out ourselves, we can see all of the ways to make our opponents' minds bend. 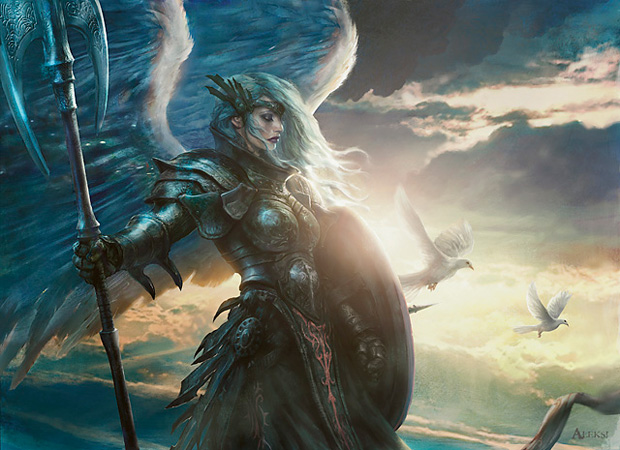 Of course, I hope you find other things that excite you about Aegis Angel. If you do, please share them with everyone in the forum, or just with me through email. I love to see what other strange things and fun shenanigans you guys see for yourself!

Last week's poll asked about the new Duels of the Planeswalkers 2012 release.

I wasn't sure what we would see when I asked this, but I'm pleased that a solid third of us have dabbled in the latest release, and over half of use have played some form of Duels. If you haven't considered it before I'd suggest you give Duels 2012 a try. Being able to tweak and adjust which of the available cards are included feels really good. Bringing in Revoke Existence, instead of Brave the Elements, when I faced Karn is a great example of changing the deck to suit. Working within the constraints of what's available was a pleasant puzzle, one that reminded me more of playing a (really powerful) Sealed or Draft deck than anything else.

This week's poll is a little more subtle:

No special message here: just an open call to see where we all sit in the color wheel.

Join us next week when we make all of our construction dreams come true! See you then!